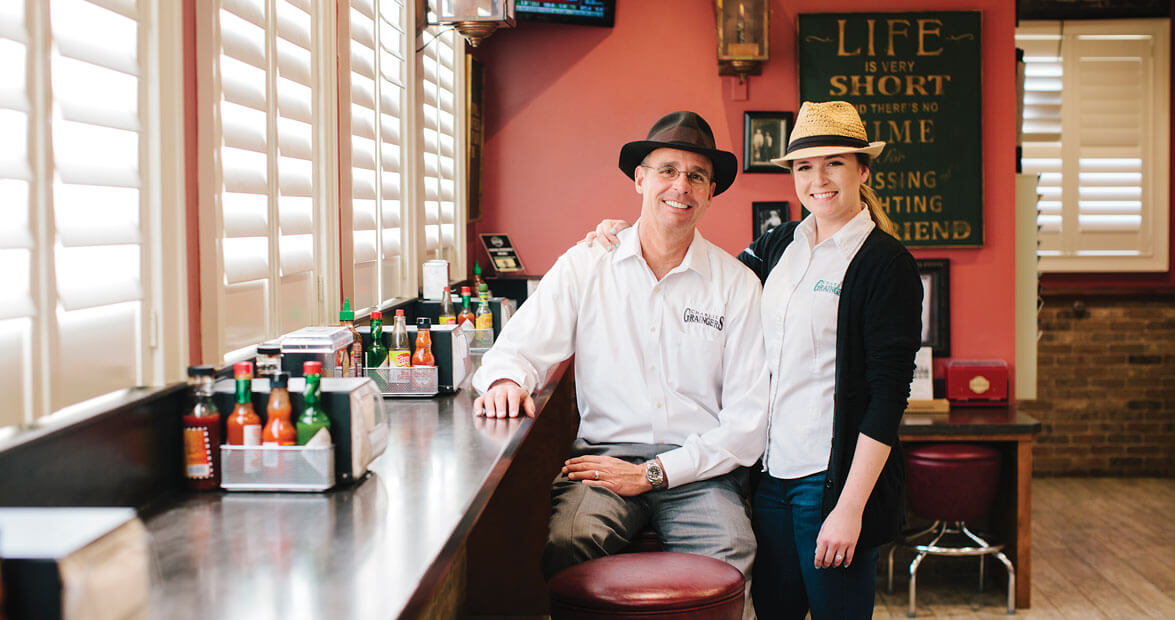 Charlie Graingers, the newest, oldest hot dog joint in Wilmington, is about to take over, if not the world, the Southeast. The tiny restaurant opened in 2013, a labor of love created by Louis North, run by himself and two employees, including his daughter. On the restaurant’s first day in business, a customer inquired where the “home office” was and whether North had plans to franchise, because he, the customer, wanted to buy in.

“I had no idea what he was talking about,” North says. He knew nothing about franchising. The home office didn’t exist.

Less than three years later, 250 new Charlie Graingers restaurants are preparing to open, in nine states, from Louisiana and Mississippi to Maryland, and Washington, D.C.

Which raises the question: What’s Louis North putting in these hot dogs? Actually, nothing. North uses Kahn’s dogs, which are a mix of pork and beef. They have no fillers, no nitrates or sulfates, are never frozen, never fried, never grilled. The Pepperidge Farm buns are white and soft, not toasted. The slaw is blessedly light on dressing. French fries aren’t on the menu, though if you absolutely require a fried potato near your dog, you can order the “Stetson,” which is topped with mayo, melted cheese, chili, and “crunchy fried potato stix.”

The trimmings and sides are made in-house: chili (no beans), pimento cheese, chicken salad, and sweet-hot molasses barbecue brisket that will bring you to your knees.

Charlie Graingers was magical from its beginnings back in the mid-1970s, when North was a teenager growing up in Wrightsville Beach. He snagged an after-school job with one B.C. Hedgpeth, whom he describes as the Willy Wonka of the restaurant business.

“He had visions,” North says. He watched Hedgpeth create the beloved Trolly Stop, and for three years, he helped with all aspects of the business — construction, roofing, painting, planning menus, and, of course, preparing and serving the dogs.

A decade later, North opened his own place, Louie’s Hot Dogs, half a block from Wilmington’s downtown courthouse, quickly amassing a devoted crowd of regulars: lawyers and judges, plaintiffs and defendants, the innocent and the guilty. The food was good and the location convenient, but most people came in for another reason — to talk. “It’s not really a hot dog business; it’s a relationship business,” North says. “Like being a bartender without the alcohol.”

The location was “sacred ground for hot dogs.”

North sold his restaurant in 1997 and went into the brick business. He had a family to support. And it wasn’t as though hot dogs were haunting him or anything. Then, in 2012, in a personal funk, he found himself driving through Wilmington’s once-vibrant Crescent Heights neighborhood. He landed at Peacock Alley, the city’s first drive-in diner. The building was vacant and crumbling, but he suddenly felt a “magical presence.” The location, he sensed, was “sacred ground for hot dogs.”

At this point, you’re probably wondering what sort of person Louis North is. Like his mentor, B.C. Hedgpeth, North is, as his wife, Lori, says, lowering her voice apologetically, “kind of a visionary.”

North spent 18 months demolishing and reincarnating Peacock Alley, building without a blueprint. The restaurant opened as Peacock Alley, but North had to change the name when he decided to franchise. So he honored local history by renaming the diner for its original owner, the late Charlie Grainger.

A narrow, high-ceilinged space — 900 square feet, with seating for 17 on old-fashioned counter stools — Charlie Graingers feels elegant and eclectic. The space is lit by recessed canister lights and hypnotic gas lamps. Warm red walls are covered with vintage photographs of Wilmington. Occasionally, a customer will exclaim, “That’s my daddy!”

You can order takeout or eat in. If you get your food to go, you might find a wrapped chunk of Dubble Bubble in your bag.

Customers from the courthouse days drop by, sometimes not realizing who’s behind the establishment until they hear North’s voice. “Is that you, Louie?” they ask.

Slowly, the neighborhood is coming back to life. “I intentionally set Charlie Graingers in one of the most depressed areas in Wilmington,” North says, “because I believe in our city, our people, and the product we serve.”