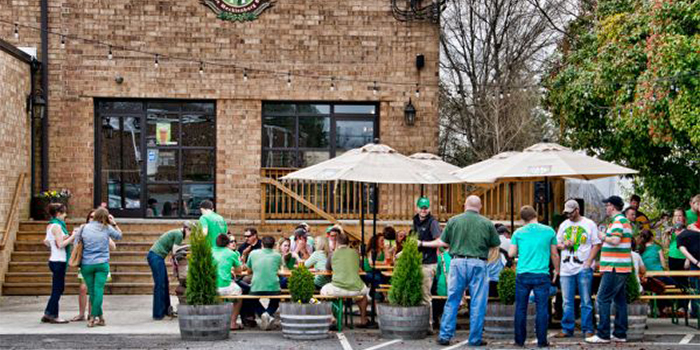 Let’s start our Saturday at the brewery that kicked off Charlotte’s craft brewing revolution in 2009. The Olde Mecklenburg Brewery is technically just past the city’s Historic SouthEnd section, but not by much. The front of the brewery is marked by several umbrella-topped biergarten tables, an ideal spot to enjoy their German-style beers. OMB, as the locals call it, brews in accordance with the German beer purity law (i.e. the Reinheitsgebot), which says that a beer must be brewed with only water, malt, hops and yeast. Additionally, almost every OMB beer is lagered, resulting in a distinct clean and crisp character. Their flagship Copper Amber Ale is ubiquitous in Charlotte, and for good reason: it’s as authentic an example of the Dusseldorf Altbier style as you will find here in the states. 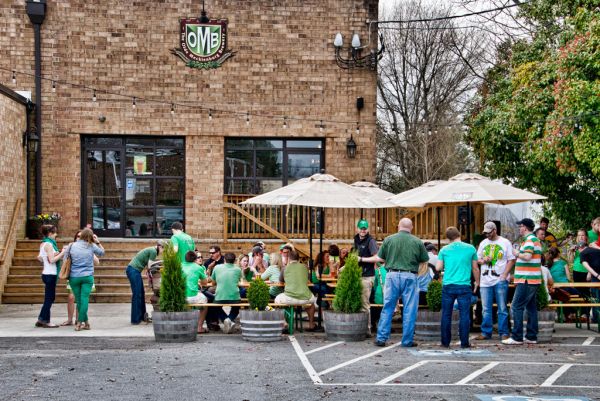 Now, point that compass north and head just a couple miles into SouthEnd to find Triple C Brewing and its modern, inviting taproom. Wood from old shipping pallets frames the glass wall that looks into the brewery. If the weather’s nice, sit outside at the picnic tables. You might even find food trucks out there. The brewery produces a wide range of beers, from their light and easy drinking Golden Boy Blonde to the limited release Up All Night Breakfast Porter. One of their more unique offerings is the Smoked Amber, which has a subtle wisp of smoke thanks to cherrywood smoked malt.

Continue your northward trek another half a mile and find Lenny Boy Brewery, which started life as a kombucha brewery. They still produce lots of ‘booch, but in 2013 they started brewing traditional beers as well. The brewery’s Tart De La Wit begins life as a traditional witbier, but is finished with a wild ale yeast that imparts a distinct sourness. In April of 2014, they acquired the space next to them, which will soon be filled with a seven-barrel brewhouse dedicated solely to beer. They are also the state’s only certified organic brewery, promising to live up to their motto of “Leave it better than you found it.” 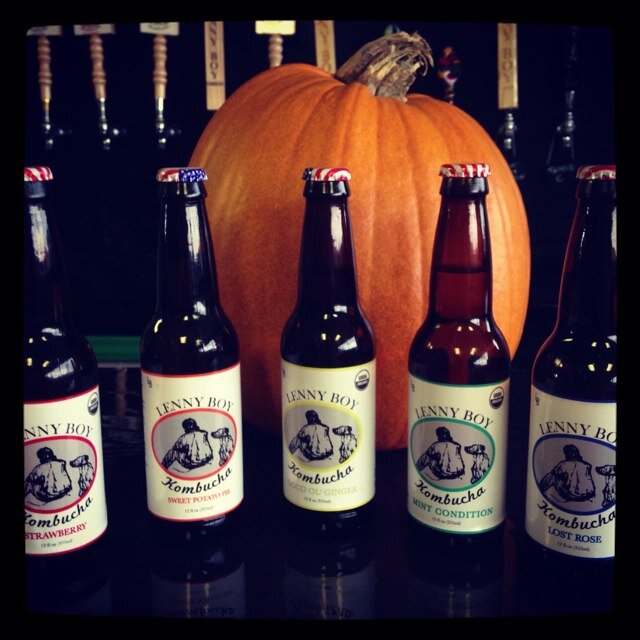 About a mile and a half north of Lenny Boy is The Unknown Brewing Company, located in a large warehouse just a few blocks away from Bank of America Stadium on the edge of uptown. The brewery opened its doors in November 2013 but was contract brewing in Georgia before firing up their big, 35-barrel brewhouse in February of 2014. Unknown’s large brewhouse is visible from a fun taproom that features neon green floors beneath gray walls. Grab a pint of their Over the Edge USPA. It has all the citrusy notes you would expect from an IPA, but founder Brad Shell dubs his a “United States Pale Ale.”

This brings us to the end of Saturday night. With an Over the Edge USPA in hand, we’re left pondering what Hunter S. Thompson, whose likeness adorns some of the brewery’s t-shirts, wrote about the edge: “ … there is no honest way to explain it because the only people who really know where it is are the ones who have gone over.”

The next morning, start your Sunday drive by heading north through uptown Charlotte and onto North Davidson, the street that lends its name to the NoDa area. What was once a mill village now draws locals and tourists alike with its art galleries, restaurants, bars and funky, eclectic vibe. Heist Brewery, the city’s only independent brewpub, is a natural first stop. They roll out a gourmet breakfast buffet every Sunday from 10 a.m. to 2 p.m., complete with made-to-order omelettes, flatbreads, gravy and biscuits, bacon and eggs, meringue waffles, quiches, fruit, baked brie and much more. When the clock strikes noon, waiters begin to serve up the classic brunch beverages of mimosas and bloody marys, but of course there is beer here, too. You could compromise and try The Red Eye, a bloody mary beer cocktail that mixes the brewery’s Patersbier (a low-ABV Belgian table beer) with their housemade bloody mary mix, ancho chili salt rimming the glass.

If you’re a purist, however, just look to Heist’s line of five new mainstay beers, crafted by new brewers Eric Mitchell and Josh Johnson. The 9.5 percent DZL Double IPA abounds with pine and citrus notes, but is immensely drinkable considering its ABV. Linger after brunch for a while for the tapping of their “Not So Small Batch” series, which takes place at 3 p.m. every Sunday.

A mile down the road, you will find the next-door neighbors of NoDa Brewing and Birdsong Brewing. It is common to find food trucks parked outside between the two, though on Sundays it’s Bring Your Own Meat (BYOM) day at NoDa Brewing. You bring the meat or veggies, they provide the grills for you to cook on. NoDa Brewing has enjoyed much success and expansion since opening their doors in October of 2011. In their beautiful taproom, you can find a wide variety of styles on tap at any given time. It’s hard to think of a style they haven’t tried their hand at, especially since they unveil a new pilot batch beer every Tuesday as part of their “NoDable Series.” They do have a bit of a West Coast influence, which is most evident in their Hop, Drop ‘n Roll, an American IPA overflowing with Citra and Amarillo hops. It has been popular since day one, and they recently started packaging it in 16-ounce cans.

Birdsong Brewing opened up literally right next door just a couple months after NoDa Brewing. The taproom is small but comfortable, with corrugated aluminum covering one wall and lots of local art on the others. There is a covered patio out front that is a great spot to enjoy a beer when the weather’s warm. Inside you can grab some complimentary peanuts and take a seat at the bar, where you’ll find year-round offerings like their popular Higher Ground IPA alongside seasonal selections like their Up on the Sun Saison. They do Belgian styles like the latter very well, but if you have just one beer make it the Jalapeño Pale Ale. With an unmistakable jalapeño taste yet no heat, this beer is delicious by itself or accompanying food.

Watch this video to see inside Birdsong Brewing.

By now, you have had quite the weekend touring seven breweries and getting to know two of Charlotte’s most beer-rich neighborhoods. So which comes out on top? Is it the NoDa neighborhood, with the city’s only independent brewpub and two breweries right next door to each other? Or is it SouthEnd, with breweries offering everything from German-style beers to kombucha?

The good news is that beer drinkers are the ones benefitting from this battle, which wages on this summer as each neighborhood adds even more breweries.

Sycamore Brewing will open in the SouthEnd area very close to Lenny Boy, Sugar Creek Brewing will open in The Olde Mecklenburg Brewery’s space once they move to their new building just down the road, and Free Range Brewing will open directly across from NoDa Brewing and Birdsong Brewing. Is there a saturation point? It’s a question that’s asked not just of the craft beer industry on the whole, but especially here in Charlotte, where new breweries are opening up at a record pace. Maybe it’s less of a saturation point, though, and more of what Hunter S. Thompson would call “the edge.”

Daniel Hartis runs CharlotteBeer.com and writes the “Beer Here” column for the Charlotte Observer. His first book, “Charlotte Beer: A History of Brewing in the Queen City,” was published in 2013; his second, “Beer Lover’s The Carolinas,” hit shelves in April 2014.