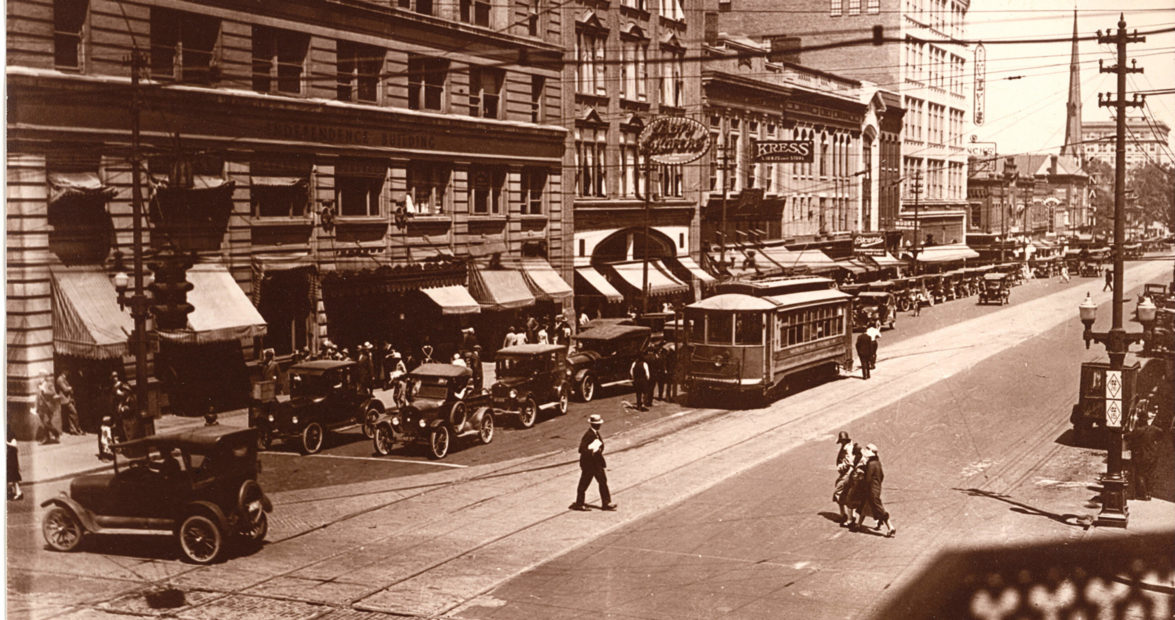 It didn’t take a genius to figure out what had happened. Only days earlier, a tip came into the police department that something big was about to go down in Charlotte.

As Frank Littlejohn surveyed the scene and listened to eyewitnesses, the chief of detectives knew this was the something big.

The mail truck was heading away from the railroad depot on Third Street when a car darted out of an alley and slammed on brakes in front of it. In swift, sure movements, four men, at least one brandishing a machine gun, jumped out of the car and swarmed the truck.

The gunman shoved the tommy gun into the truck’s cab and disarmed the driver. At the same time, two men walked to the back, cleanly clipped the lock on the rear doors with a pair of wire cutters, forced the mail clerk out of the truck, and grabbed several sacks.

In less than two minutes, the thieves, loot in hand, retreated to their car, and, in a cloud of dust, they — and more than $100,000 in cash and bank notes — were gone.

Littlejohn had no doubt that this crime, well executed and committed in broad daylight on a clear morning, was a mob hit. He was right.

The year was 1933. The day, November 15. In Chicago, Illinois, Al Capone was battling Roger “The Terrible” Touhy for control of illegal beer and liquor sales in that city’s northwest suburbs. Five months earlier, Capone’s agents framed Touhy for the kidnapping of Jake Factor, a known gangster (and brother of the famed makeup artist Max Factor). Touhy was awaiting trial when four of his henchmen headed south to “raise” money for his defense.

Charlotte in the 1930s had few if any connections to organized crime. Cotton fields surrounded it, and textile mills filled it. As in many towns at the height of Prohibition, staunching the flow of bootleg liquor was one of law enforcement’s primary occupations. But Charlotte, already with a population of roughly 80,000, was on its way to becoming a financial center.

“There were multiple skyscrapers and fancy department stores and the new offices of the Federal Reserve, which opened in 1927,” says Dr. Tom Hanchett, staff historian at the Levine Museum of the New South. “Money flowed in and out of Charlotte.”

Touhy’s men probably thought targeting deposits on their way to the Federal Reserve in the so-called sleepy South seemed like an easy mark. They were wrong.

What Touhy didn’t know was that he had sent his men to commit a headline crime in a city patrolled by a man who J. Edgar Hoover would describe as “the finest detective in America.” The ruthless gangster soon learned why.

According to It Happened in North Carolina, Scotti Kent’s 2000 book detailing several little-known episodes in the state’s history, Littlejohn came to Charlotte from South Carolina in 1917 to run a shoe store. Sometime in the 1920s, he went to work as an undercover federal agent investigating Ku Klux Klan activities. In 1927, the Charlotte City Council hired him to rid uptown Charlotte of prostitution. That position, originally temporary, was the start of a 30-year career with the Charlotte Police Department.

By the time of the mail truck robbery, Littlejohn had risen through the ranks to become chief of detectives. He was a tall, lanky man. He smoked cigars, and even today, people who knew him talk about his big nose. Some say his ego was bigger.

“He was not very humble,” says Ryan Sumner, the historian who curated “Beneath the Badge,” the exhibit on policing in Mecklenburg County at the Charlotte Museum of History. “He had a reputation for being good, and he knew it.”

“He was no fool,” says Johnnie Helms, 79, a retired officer who went to work for the department in the 1950s when Littlejohn was chief of police. “He was thinking next week while I was thinking today.”

Helms remembers Littlejohn as a tough but fair man who knew his city and who had strong ideas of how its police department should be run. He didn’t like to be told what to do; he had more than one clash with the City Council throughout the years and ultimately was fired 15 days before his scheduled retirement for publicly criticizing a council action.

And as a story in the book Charlotte Police Department 1866-1991 shows, he wasn’t one to let convention get in the way of closing a case. Evidence told Littlejohn that a murder in the Myers Park neighborhood was likely the result of a homeowner walking in on a burglar. Experience with Charlotte’s more unsavory characters told him who his likely suspects were.

Rather than interrogating the suspects, Littlejohn called their wives and girlfriends into his office. With the lights down low, he peered into a crystal ball and began chanting a voodoo spell he remembered from childhood. According to Charlotte Police Department, “One of the women began swooning and screamed that the killer was her husband.”

Hot on the trail

When Touhy’s men hit the mail truck, all Littlejohn and his men needed was a single clue to get the investigation rolling. They got it when the car used in the robbery was discovered within hours of the crime just outside the city limits. It was a brand new black Plymouth sedan that was stolen from a home on East Morehead Street two weeks earlier. Maintenance records indicated that since its last service, the car had been driven only nine miles — almost the exact distance between the robbery and where the car was abandoned.

“If it hadn’t any more than nine miles on it, it had to have been hidden somewhere all that time,” Littlejohn explained in a Charlotte Observer article published toward the end of his career. So he put a detective in a car and told him to drive along every route leading to the holdup scene. At the same time, he had postal carriers asking residents on those same routes if anyone had rented a garage. “This was a mail robbery, you see, and the postal inspectors were on it. … We rang every doorbell,” he said.

They found a woman on 10th Street who had rented a room to two men. At first, they didn’t want to take it, she said, because it didn’t come with a garage. She arranged for them to use her neighbor’s. But, she added, every time the two men left the house, they headed west, on foot.

That information, combined with the fact that there were still two robbers unaccounted for, sparked a search for a second hideout.

A tip about an unfamiliar Packard spotted near where the Plymouth was stolen sent Littlejohn to the second location. “I went tearing out,” he said. “I came up to the door and heard my own police calls blaring out.”

Whoever had been in the room left in a hurry. They didn’t bother turning off the radio they had tuned to the police channel. Detectives found a suitcase full of clothes, three steaks in the refrigerator, and, on the table, a newspaper with the story of how Littlejohn found the car used in the robbery. Littlejohn ordered his men to take every item, including the garbage, to headquarters. There, he sorted out 27 bits of torn-up paper that, when pieced together, formed a Chicago rent receipt.

“For 60 hours there, I didn’t have my shoes off,” Littlejohn said. “I left here at 6 p.m. that evening and was in Chicago the next morning.”

The landlady at the rental property gave Littlejohn descriptions that matched eyewitness accounts in Charlotte.

“The landlady said one of the men carried a violin all the time,” Littlejohn said in the 1957 interview. “That was no violin. That was a machine gun case!”

Between the descriptions and fingerprints lifted from beer bottles found in the second hideout, investigators nailed the robbers’ identities. The ringleader was Basil “The Owl” Banghart, a notorious thief in the Chicago area and Touhy’s right-hand man. His suspected partners in the heist were Ludwig “Dutch” Schmidt, Isaac A. Costner, and Charles “Ice” Connors. All four had long histories on the wrong side of the law.

Within two weeks of the robbery, three of the suspects were behind bars; one was dead. Investigators tracked down Banghart in Baltimore. He was arrested and, six months after the holdup, stood trial in federal court in Asheville. He was sentenced to 36 years for his role in the robbery. Costner testified against his cronies but still got 30 years. And Schmidt pulled almost 30 years.

Ice Connors never made it to trial. According to The Charlotte Observer article, he “was found dead in a Chicago suburb, his body riddled with machine gun bullets and trussed with barbed wire, his dead fist clenched around a penny.”

Littlejohn explained in the 1957 article: “That’s the underworld sign for betrayal. Maybe Ice was just dumb, but he put the police on the mob’s trail and that was enough to kill him.”

For his role in solving the crime and helping to put Touhy’s top associates behind bars, Littlejohn received a letter from J. Edgar Hoover in which the legendary FBI director praised him “as the finest detective in America.” The framed letter adorned Littlejohn’s office throughout his career with the Charlotte Police Department, which included 12 years as chief of police.

Say the name Littlejohn to anyone who knew him or is familiar with his history, and you get the same reaction: He was a no-nonsense character, a poster boy for hard-line law enforcement. Helms, who walked an uptown beat in his early days on the force, remembers the chief as a man who spent little time at his desk and who knew everything about his city.

As the voodoo story demonstrates, Littlejohn wasn’t above using questionable measures to solve a crime. Yet, Charlotte Police Department 1866-1991 credits him with setting the police department on a course toward more professional law enforcement. He established Charlotte’s first police academy; before that, new recruits were handed a gun and a badge and put on the streets. He sent commanding officers to the FBI National Academy and the Southern Police Institute. He set up the first youth bureau in the state to address juvenile delinquency, and the police department established its first firing range under his reign.

Littlejohn had high expectations for his officers, Helms says, but he had the respect of his men and of the townspeople.

Even with those accomplishments, Charlotte’s “crime of the century” and his role in solving it remained a highlight of Littlejohn’s career. It shows up in most references to the chief.

Littlejohn enjoyed the recognition and recounting the drama, no doubt. But apparently, the way he saw it, putting together the pieces of the puzzle was just a part of the job.

“People have an exaggerated idea of the acumen and brains a case like this takes,” he said in 1957. “Mostly, it’s persistence … persistence and perception, which is different from observation.”