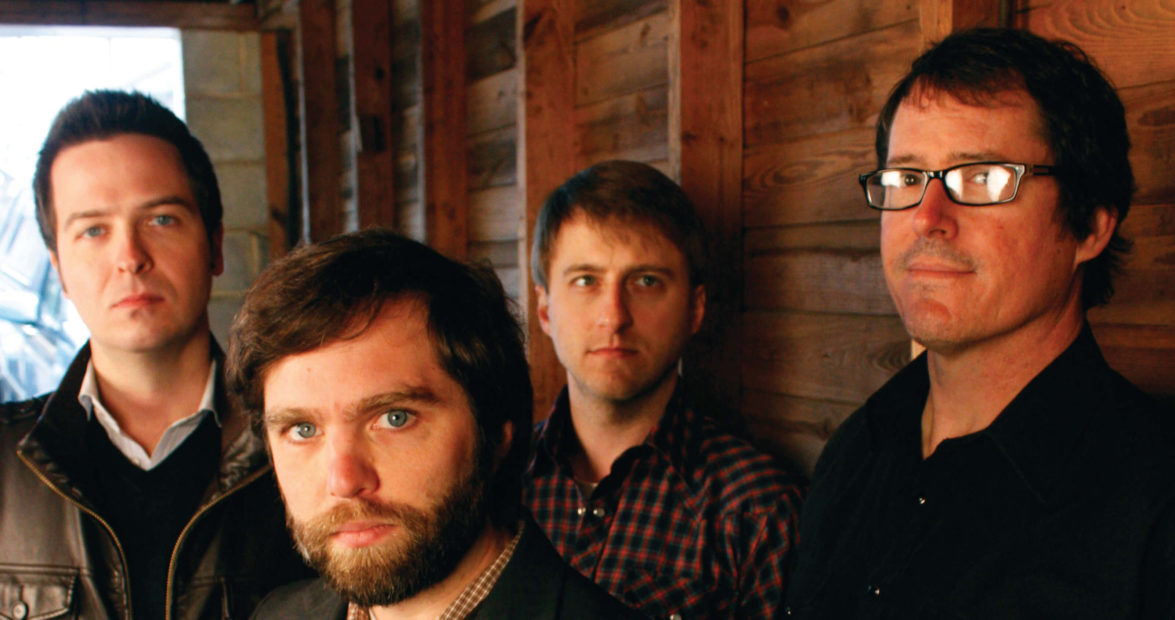 The Blue House on Raleigh’s Boylan Avenue served as crash pad and rehearsal space for many a band. The big foursquare — vinyl clad these days, its wooden columns rotting and splitting — stands just up the street from Elmwood House, the historic home of judges and ambassadors. It’s within earshot of the Carolinian’s whistle as the train passes through town and just beyond the enticing hot-grease smell that wafts from the Char-Grill burger stand, vintage 1960, over on Hillsborough Street.

About 10 years ago, on the Blue House’s wide front porch, four young men picked out tunes that gave them the notion of starting a bluegrass band. In the high-ceilinged foyer inside, they worked out how to play around a single microphone, in a style borrowed from the Grand Ole Opry. After seeing Del McCoury live in Durham, they began wearing suits and ties to perform. A housemate contributed a big North Carolina flag to display behind them on stage. Chatham County Line was born.

None of the four grew up steeped in the bluegrass tradition. Lead singer and guitarist Dave Wilson played saxophone until he was kicked out of the school band for cutting up. John Teer, who plays fiddle and mandolin, and Greg Readling, stand-up bass, had early classical training in violin and piano, respectively. Chandler Holt didn’t pick up the banjo until he was 19 and a J.D. Crowe recording he heard in Teer’s car made a strong impression.

Teer’s car was a rolling library of classic bluegrass CDs by that point, thanks to the influence of his fiddle teacher and mentor, Jan Johannson. Meanwhile, Readling saw an early Whiskeytown show that inspired him to take up pedal steel guitar, and an Old & In the Way recording got Wilson listening to the bluegrass masters. They all took country-rock and alt-country detours — Holt and Teer formed Burgeon while Readling and Wilson started Stillhouse, and Teer played lead guitar with Thad Cockrell, while Wilson and Readling toured with Tift Merritt. But before long, the four let the bluegrass bug have its way.

By then, Holt lived out in the country, in a farmhouse just shy of the border between Orange and Chatham counties. Heading out for rehearsals, Teer and Wilson regularly missed Holt’s driveway. They knew to turn around when they saw the sign marking the county line. One day when they drove by yet again, they found a name for the band.

Their original songs, most written by Wilson, are heavily bluegrass inflected. Using rural instruments rooted in the folk tradition strongly influenced the imagery — the trains, the prisons, the fishing trips — that Wilson worked into his early lyrics. Still, he says, “I wasn’t born in a shack or anything like that. I grew up on R.E.M., Drivin N Cryin, all these great Southern bands. That’s what’s deep down inside of me.”

These days, Teer considers the band “an Americana outfit that includes bluegrass instruments.” While its members have deep respect for bluegrass tradition, there’s a lot going on inside them musically.

Some of what goes on inside them draws from the Triangle’s lively, diverse music scene. And they’re conscious of their roots in the sounds and the history of North Carolina. “We think we sound like where we come from,” Wilson says, and that’s part of the reason they unfurl the state flag behind them wherever they play, even in the northern reaches of Norway — one place they’ve built a passionate following, thanks to two gold record collaborations with Norwegian star Jonas Fjeld.

Fans on their home turf love them, too. With five albums released in this country, they came home between United States and European tours in August to do a show at the Fletcher Opera Theater in Raleigh. With its wood-paneled walls and upholstered seats, it’s a far cry from the Blue House and from the more unbuttoned venues they typically play.

Some in the audience had gray heads; others sported black sneakers and heavily tattooed arms. Almost all, it appeared, already knew the latest release, Wildwood. They whooped as the band launched into “Out of the Running,” a track from the new record. They yelled, “Teer!” and, “Chandler!” from the boxes and cheered for a hard-driving break or a bluesy harmonica run. By the final tune, “End of the Line,” all of them — old and young alike — were on their feet, clapping along.

They play the classic bluegrass instruments. Their fiddle, mandolin, and banjo licks often have the tossed-off virtuosity so characteristic of bluegrass music. And they nail that distinctive bluegrass sound that results when plaintive vocals intertwine with driving, energetic instrumentals. Yet Chatham County Line has never been just a bluegrass band. Even the group’s first, self-titled album, released in 2003, was part tribute to tradition and part reinvention, layered with nostalgic images. Increasingly, lead singer and guitarist Dave Wilson — who composes most of the group’s songs — gives his singer-songwriter sensibility more rein, and the band freely incorporates rootsy strands of alt-country and rock.

Their latest album, Wildwood, from Haw River-based Yep Roc, takes those impulses even further. It’s not just that they added drums to some tracks, courtesy of their old friend Zeke Hutchins. They sound more comfortable mixing bluegrass with other genres. On Wildwood’s strongest songs, Chatham County Line members step beyond their influences with the confidence to simply be themselves. A listener can’t help sensing that as they continue with that authority, they’ll use their considerable bluegrass chops even more creatively and come even closer to capturing the energy of their live shows.