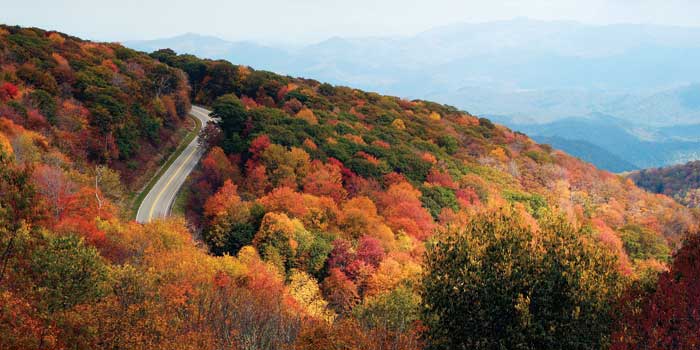 Nobody makes cider on the Cherohala Skyway. Nobody serves cheese with a glass of mead. Nobody clogs, plays banjo, makes pottery, blows glass, sells plush bear puppets, or offers any such comfort to a mountain traveler. There’s nobody up here. And that’s the best part. To hear the bees buzzing in the wildflowers at mile-high Santeetlah overlook, to stand on peaks so high you can almost grab a handful of clouds, to drive two hours through Smoky Mountain country without seeing a single rooftop, you’ve got to outrun civilization.

Building this two-lane mountaintop road took roughly 40 years and $100 million, a labor-of-Hercules construction job that connects the tiny town of Robbinsville with the tiny town of Tellico Plains, Tennessee. And it runs for only 43 miles, 18 of them in North Carolina.

For most people, just getting to this far-flung stretch requires a daylong drive, the last bit of which means sputtering up hills so steep your car strains in third gear, darting around corners sharp enough to make your steering wheel whinny, and dipping into forests so dark you need headlights at noon.

If you imagine North Carolina being shaped like a left shoe, then the Cherohala Skyway represents the distance from the knuckle to the nail of the littlest toe. Drive any farther, and you tumble into Tennessee.

But it’s not just the distance that gives the Cherohala its lonely quality. This is harsh country, long thought impassable.

The Cherokee tribes spent centuries here, carving out a life on the steep slopes and mile-high peaks, making soup out of yellow-jacket larvae, carving fishhooks out of deer bones.

Bushwhackers hid in these woods — outlaw gangs made up of deserters from both sides in the Civil War, united by their love of robbing, raiding, and throwing back cheap whiskey.

Even plant life suffers hardship along the Cherohala. Take a short hike down the trail at Spirit Ridge, at 4,950 feet, and you’ll see the fallen trunks of chestnuts wiped out by blight. A century ago, they were kings of the forest.

But often, the best places are the hardest to reach. The prettiest views are rewards for the hardest slogs. You form a grudging love for the country that slaps you around a little bit.

When you round the last bend on N.C. Highway 143, pushing out of a long tunnel of leaves, ears popping from the dramatic ups and downs, the skyway officially begins with a flash of light you haven’t seen for 10 miles. Suddenly, after miles of squinting under a dark canopy, you can see enough mountain air to fill five stadiums.

The famous misty-blue peaks jut out right in front of you, clouds floating like cotton balls at eye level. A sign welcomes you to the Cherohala’s official beginning on the North Carolina side: Santeetlah Gap, 2,660 feet.

Some warnings: You might see a bear. You won’t see a gas station. You’ll need lunch, or at least a snack. If you’re lucky, a flying squirrel will come shooting overhead, taking advantage of the artificial tree trunks built as launching pads to aid their flight.

But most important, you won’t see many people.

Up here, whether you come pulling an Airstream trailer or straddling a Harley, it’s just you, the mountains, and your thoughts.

Any time you’re driving in the North Carolina mountains for the sake of scenery, it’s impossible to resist comparing your road with the Blue Ridge Parkway — the nation’s Shangri-la of leaves.

By most measures, Cherohala barely registers a peep.

At an average of 500 cars a day, it can’t come close to matching the roughly 20 million visitors the Blue Ridge Parkway lures each year.

The Cherohala’s far-more-famous rival passes near all the state’s biggest and most established mountain towns: Asheville, Boone, Blowing Rock. The parkway is lined with lodges and cabins to sleep the busloads and Winnebagos full of foliage hunters that flood in every autumn. And if they get lost along the way, they can consult a 22-foot interactive map at the Blue Ridge Parkway Visitor Center in Asheville or stop at park offices and shops along the way.

In contrast, the Cherohala’s largest neighbor is Robbinsville, population roughly 700, where the driver’s license office is open only on Tuesdays and Phillips Restaurant prides itself on fried green tomatoes.

Once you’re driving the Cherohala, you won’t hit another inhabited spot until Tellico Plains in Tennessee, which boasts only about 900 residents.

More or less, the last sign of life out of Robbinsville is the hula girl with the swiveling hips on top of the Pineapple Whip stand.

Curious riders along the Cherohala rely on old-fashioned highway signs to tell the mountains’ stories. They’re only a few feet wide, you’ve got to stop the car to read them, and they’re no more interactive than a tombstone. But they’re surprisingly well written — the work of some anonymous poet.

At Spirit Ridge, the signs tell you that beech leaves “feel like new money.” At Obadiah Gap, you’re asked to consider the Cherokee of 1838 and invited to, “Imagine living here with your family when all-of-a-sudden soldiers explode into your house and force you out at gunpoint!”

But stop at any of the overlooks, and often, you’ll have the view to yourself, clear to the distant peaks of Smoky Mountain National Park on a good day.

“It’s a jewel,” says Cheri Brantley, director of Graham County Travel and Tourism. “A jewel that hasn’t really been discovered yet.”

If you do find company here, chances are they’ll say the Cherohala scenery equals and sometimes beats the Blue Ridge Parkway.

It seems wilder and more overgrown west of Robbinsville. You get more of a sense of being at the top of the mountains rather than in the leafy middles. Vines grow everywhere.

It’s easier to imagine living as a Cherokee or a Civil War outlaw where the greenery is so uninterrupted, spilling down sharp drop-offs like a waterfall.

Plenty of people opposed building the Cherohala. Environmentalists stalled the project for years, and the route was changed to avoid Joyce Kilmer Memorial Forest. Some sentiment remains that Cherohala land was too pristine to touch.

Looking out from 5,000 feet, the only evidence of mankind is the skyway itself.

Flying squirrels no doubt resent us. Unable to cross two lanes in one bound, they rely on man-made towers to boost them from side to side.

But despite four decades of construction, civilization left few tracks.

Ask the cyclist pumping up the skyway at 4,000 feet, calves exploding, rarely hearing traffic at his back.

Ask the hikers who start down trailheads from the skyway and disappear into the forest, losing light and even the trail as the woods close around them.

Other than bird chirps, the only sound to break the silence on the Cherohala is the thundering of motorcycle engines. On the endless S-curves that make up Graham County roads, bikers outnumber cars when the sun shines and the routes are dry. Most often, they stick to the 11-mile squiggle formed by U.S. Highway 129 north of Robbinsville, a winding path nicknamed Tail of the Dragon that qualifies as biker Mecca.

Churches in Robbinsville post “Dragon Slayers Welcome” on the signs out front. Country stores sell T-shirts with this two-wheeler’s boast: 318 curves in
11 miles.

But bikers often loop back along the Cherohala, which they seek out for its traffic-free mountain ride. You’ll see them parked at the overlooks to gab and rave.

There are advantages to boring topography, they all agree: When your dog runs away, you can still see him for three days. Up here, wildlife springs out at you.

“I’m not saying there’s not a better stretch on the Blue Ridge here and there,” Grimes says. “But for 50 miles, it’s just a great road. Good pavement. No gravel. All the turns are marked. I’m still waiting for a flying squirrel to come across.”

For more information on the skyway, visit cherohala.org.