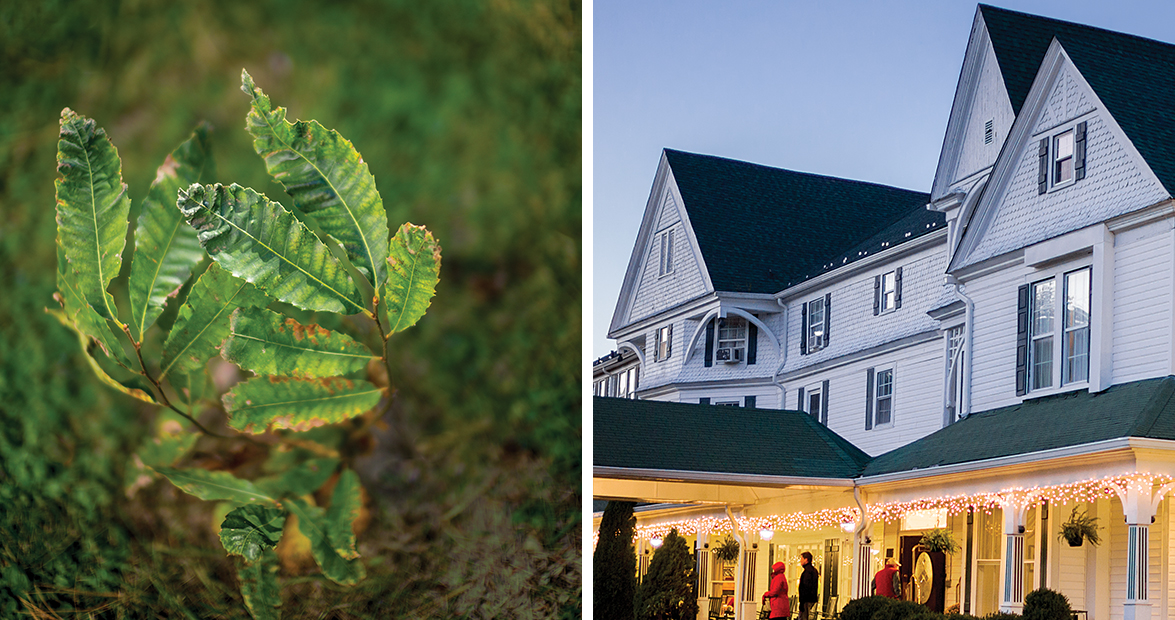 The American chestnut was once your welcome sign to the Blue Ridge.

When you began to wind into the mountains, you would have seen it, with its curtained ridges of bark, spread wide on the ancient ones like an apron, not so different from the redwood it was commonly compared to.

It’s a fact that can hardly be imagined now: The American chestnut was one-fourth of the Appalachian forests. It was the dominant tree, crowding out all other contenders. If the conditions were right, it would drive out the other species and turn the groves 100 percent chestnut.

But a decimating blight changed all that. Today, when someone finds a healthy, full-grown chestnut tree, it makes the newspapers.

You can still see a lot of chestnut end products — telephone poles, hundred-year-old barns, fence posts. (Come to think of it, maybe you won’t see as many as you used to, since there’s a great resale market for furniture makers who take those chestnut planks and poles and make a fine chair from them — for an also-fine price.)

The 127-year-old Green Park Inn, on the outskirts of Blowing Rock, boasts some of the best examples of chestnut handiwork anywhere. There are long, sturdy chestnut beams throughout. In the hotel’s restaurant, the Chestnut Grille, the menu comes on a plank of chestnut, and you can weigh it in your own hands: The wood is adamantine, serious as a stone tablet. There is a chestnut mantel over the fireplace, carved by local artisans. 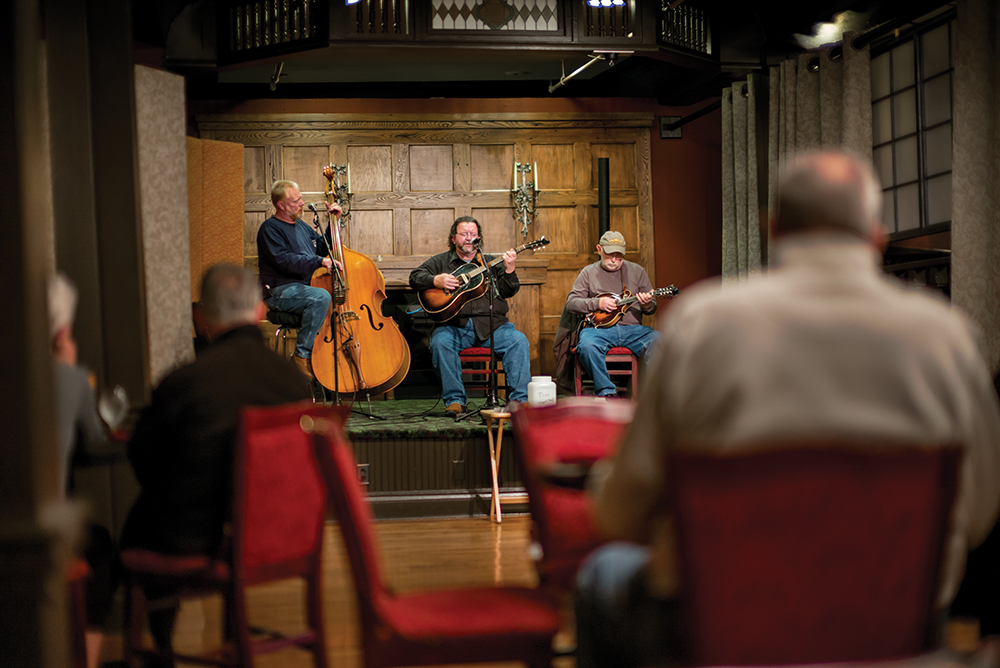 Chestnut woodwork and fireplace mantel are the backdrop for a performance by The Neighbors at the Green Park Inn. photograph by Charles Harris

This cathedral of the American chestnut had its beginnings in the 1880s, when the charms of the Blowing Rock area occasioned a hotel boom — The Watauga in 1884, the Blowing Rock Hotel in 1889. After a group of businessmen from Statesville built a world-class destination in Green Park, The Lenoir News gushed about its opening in 1891, “There will not be a finer hotel in the South. It will have 60 rooms, each of which will be furnished with an electric bell and with water from a complete system of waterworks. There will be fireplaces in every room.”

Flatlanders began enduring the 18-mile, rough-and-tumble surrey ride from the railway station up to the High Country’s newest resort at 4,200 feet.

By the 20th century, the Green Park Inn was a magnet for magnates (John D. Rockefeller) and movie stars (Dorothy Lamour, John Barrymore), literati (Pearl S. Buck, Margaret Mitchell) and presidents (Calvin Coolidge and Herbert Hoover; Dwight Eisenhower played golf there). There was a bowling alley, a shooting range, a croquet lawn, and a parade of special events for summer visitors. Annie Oakley performed her signature trick: shooting the center out of a quarter as it flipped in mid-air.

Sometimes referred to as the “Grand Dame of the High Country,” the Green Park Inn rivaled the great Asheville hotels for glamour and excitement in its day. And thanks to a restoration begun in 2010, the Green Park Inn and its chestnut furnishings are poised for glory in this century. The 19th-century rooms are now burnished to their former elegance (but now with mercifully modern bathrooms, Wi-Fi, and high-definition televisions), and there are amenities like massages that guests who stayed here a century ago could have only dreamed of.

My “Aunt Betty,” who was raised in Lenoir, remembers the Green Park Inn from her childhood, the adventure of winding up the Lenoir Turnpike (today’s U.S. 321), a late Sunday lunch followed by a necessary after-lunch constitutional by the impounded lake. The headwaters of the Yadkin River flow east from the ditch alongside the parking lot while the headwaters of the New River (back when the property was 400 acres) flowed north.

Though “Aunt Betty” is 90 years old and beyond the reach of scandal, she requests that I disguise her name for the tale to come: “People say they went for the cool, fresh mountain air,” she reports, “but just as many went for The Bark.” 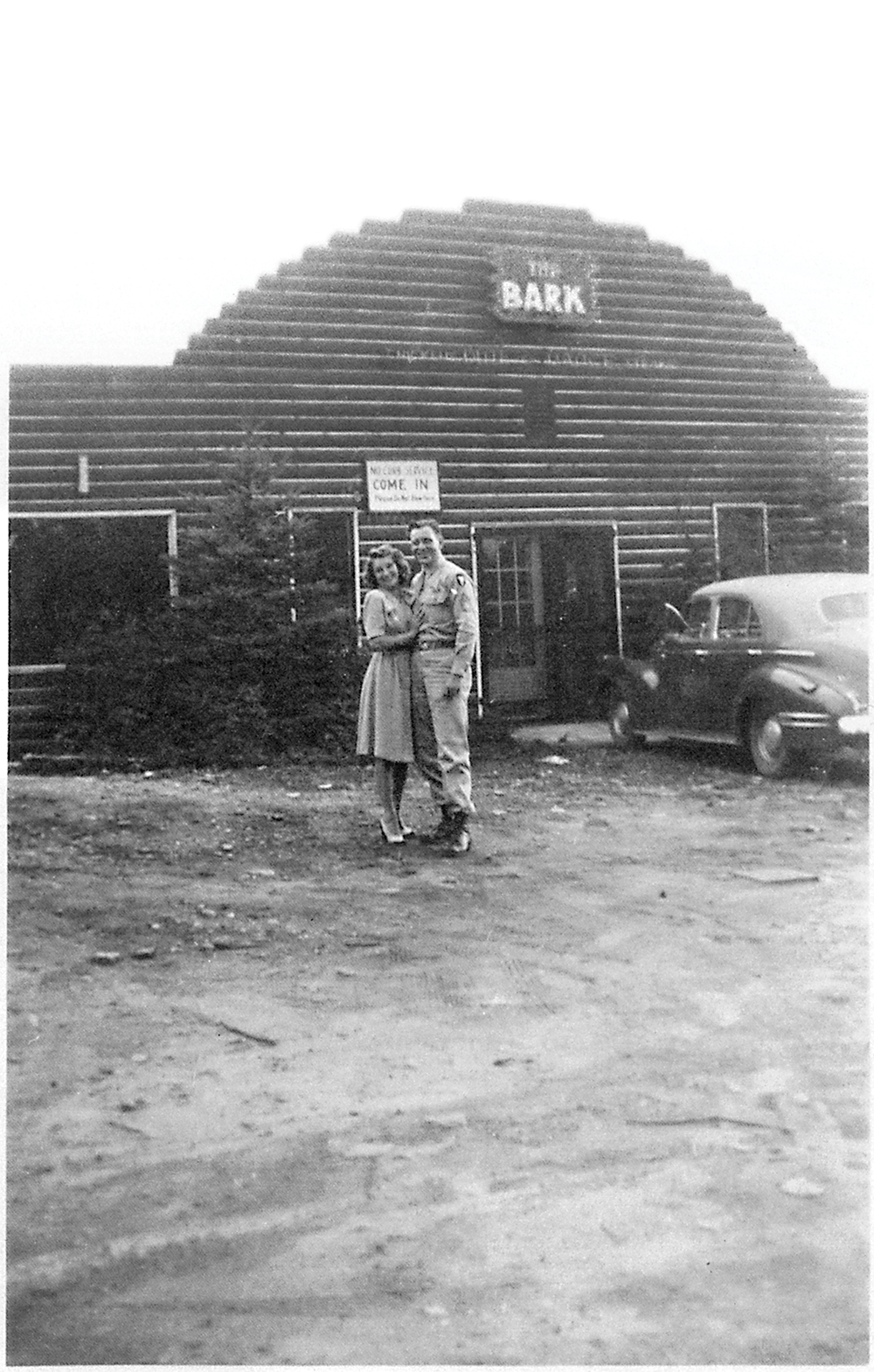 In the first half of the 20th century, before blight decimated American chestnut trees, The Bark’s facade paid homage to the king of the forest. photograph by Canyons Restaurant

The Bark was a honky-tonk/roadhouse/dance hall/speakeasy identifiable by its exterior of chestnut bark. For a while it was a casino, too.

According to Aunt Betty, “Many of the respectable swells at Green Park Inn wouldn’t have been seen imbibing liquor in their hometowns — couldn’t have, since most towns in North Carolina were dry. So a little trot down to The Bark made your stay at Green Park quite a little holiday.”

Watauga County was dry, too, but that didn’t stop anybody. The local artisans of Wilkes County kept a steady supply of corn liquor flowing up the Lenoir Turnpike. (It’s said that some of NASCAR’s first legendary drivers cut their teeth speeding up the Aho and Globe roads to make deliveries of white lightning.)

The Bark has evolved into the less notorious Canyons of the Blue Ridge restaurant, but its website nonetheless extols the juke joint’s history: “During the ’30s, ’40s, and ’50s, when State officers would raid the establishment, those inside would jump out a back window, shimmy down a ladder, and escape into the deep woods extending into the gorge. Officers would confiscate or pour out the illegal mash and close the doors; but before they reached Raleigh, the ‘business’ would be back up and running.”

I’m a little surprised that church-elder Aunt Betty ever stepped foot in such a palace of sin. “Well now,” she says, “there was nowhere much to dance in those parts. And young people like myself would come over from Boone, from Appalachian State, though you could get in terrible trouble if it became known you went to The Bark.”

Thoreau worried about the violence of shaking a chestnut too hard for its nuts: “It is worse than boorish, it’s criminal, to inflict an unnecessary injury on the tree that feeds or shadows us. Old trees are our parents, and our parents’ parents, perchance.”

From Captain John Smith recording the recipe for Powhatan’s chestnut stew to Mel Tormé crooning, “Chestnuts roasting on an open fire,” the chestnut has accompanied America from birth to the present.

Yet who in 1950, sitting in the sturdy front-porch rockers of the Green Park Inn, could have imagined that the mighty alpha-tree of the Appalachians, “the redwood of the East,” would nearly no longer exist by decade’s end?

The villain was Cryphonectria parasitica, known as chestnut blight. It was first detected in the country in 1904, when imported Chinese chestnuts were ornamentally planted in Bronx Zoological Park. The Asian trees carried the fungus but could withstand the blight; their American neighbors succumbed quickly. By 1940, nearly four billion American chestnuts had died. Settlers took the tree with them as they headed west, and some groves in Michigan and Wisconsin, and even British Columbia, have hung on. But the American chestnut in its native range is now what is termed “functionally extinct.”

But, a ray of hope: The blight took down the mighty chestnut from the trunk upward, compromising its circulation through the bark, leaving the root systems alone. The wind might topple a dead chestnut, but from the still-living roots, a seedling could emerge.

“That has been our life-saver,” says Ruth Goodridge, a recent spokesperson for The American Chestnut Foundation, based in Asheville. “The seedlings will not make it to the nut-and-flower stage and adulthood, but we have no trouble producing young trees for our research and breeding programs.”

The organization, founded in 1983, has 16 regional chapters, and armies of volunteers and donors throughout the Midwest and along the East Coast. The ACF partners with parks, state and national forestry services, universities, and research labs, working to produce an American chestnut that will reach maturity and thrive. They support a breeding farm in Meadowview, Virginia, where scientists use backcross breeding methods to blend the Chinese blight-resistant variety with the American variety and hope to arrive at an impervious chestnut with its American qualities intact: the size, the rot resistance, the high tannins, the sweetness of the nut.

There is work being done with gene-splicing, too, adding a gene into the American chestnut genome to make it resistant to blight. Another project, based at the University of Maryland, concerns hypovirulence. This is an attempt to prevent the blight fungus from killing a tree by introducing a virus to the fungus.

“Believe me, we’re using every tool in the toolbox,” Goodridge says. What is the final goal? “Splendor,” she says, without irony. “We want the iconic American tree back to its former glory, from Maine to Georgia, dominating the Blue Ridge forests the way it was intended. We want our chestnut groves back.”

The Green Park Inn is a member of the ACF in good standing and is nursing three American chestnut seedlings to maturity on its property.

We might sit in those Green Park Inn rockers yet, looking out at a great chestnut forest returned to its mountain home after what, we hope to one day say, was just an ecological detour.