Early in his career, Dwayne Patterson worked for Warren County Public Schools, where he watched first and second graders hug each other every day. Later, he got a job in the juvenile justice system, where he listened to 12-year-olds talk in detail about the terrible things that had happened to them. Ever since, Patterson has felt a drive to make sure that children are given the best possible opportunities. “We have to protect them; we have to offer them a future,” he says. “I just love them. How do you explain love? I don’t know how to explain that.”

When Patterson himself was a kid, he loved the outdoors. His father taught forestry and horticulture. He used to challenge his to son identify trees as the two drove down the road or walked through the woods. Patterson grew up in Kinston surrounded by two things: tobacco fields and trees. About 100 yards from his house was a grove of plum trees, and, on occasion, he’d walk back there and eat the fruits until he got sick. He called this place “Paradise.”

Today, Patterson sees Paradise in places like William B. Umstead State Park, an area teeming with nature but wholly surrounded by Raleigh’s ever-growing mix of new homes, shiny buildings, and asphalt highways. Back in 2018, just two weeks into his job as director of North Carolina State Parks, he stood at the edge of a parking lot and looked into a thicket of pine, sweet gum, and maple. This was his childhood, he said at the time. He didn’t go to a lot of parks when he was a kid. Hammocks Beach once a year. Cliffs of the Neuse a few times. Back then, you didn’t need parks like you do now. Back then, you could roam the woods in nearly any direction. Back then, the whole world was your park.

Today, our parks stand out amid the increasing suburbanization of North Carolina, a state that adds around 300 residents a day and is continuously plowing under farm fields and woods to make room for those people. No Trespassing signs are more prominent. Parents are more watchful, tracking their kids’ every move by cell phone. There are fewer places to explore and more areas that are cordoned off. Private property, it seems, has become more private.

Which means that state parks are more important now than ever. Indeed, attendance is soaring. In 2021, in part because of the pandemic, 22.8 million people visited our state’s parks and recreation areas, shattering the previous record by three million. Parks are islands of nature in an increasingly paved world, a world that doesn’t look much like the one that Patterson grew up in. That old world is gone. In this new world of intermittent forests and lives lived increasingly on phones, Patterson finds himself with a job he never envisioned having. He can’t turn back time. But he can, he hopes, get you and your kids back outside.

At Umstead on that day back in 2018, Patterson didn’t look the part of either a bureaucrat or a rugged outdoorsman, a fact that came into focus as he stood between a fully uniformed ranger and an assistant wearing the official State Parks logo on her shirt. Patterson prefers Burberry glasses and a Nautica polo tucked into jeans, and he sports a neatly cropped mustache. He’s 64 now, but when he talks about his “reckless” youth, 50 years or so ago, his jovial voice softens a little, although his smile never disappears.

Officially, Patterson may be The Parks Guy now, but he hasn’t been a parks guy for most of his career. He’s worked in the nonprofit world, and his last stop before his current gig was chief financial officer for the state Department of Natural and Cultural Resources, which oversees the entirety of the Department of State Parks. Patterson knows the budget. And when he visits a park these days, the rangers see him coming and, almost immediately, ask him about raises or about when they’ll be getting money for things like new pickup trucks. 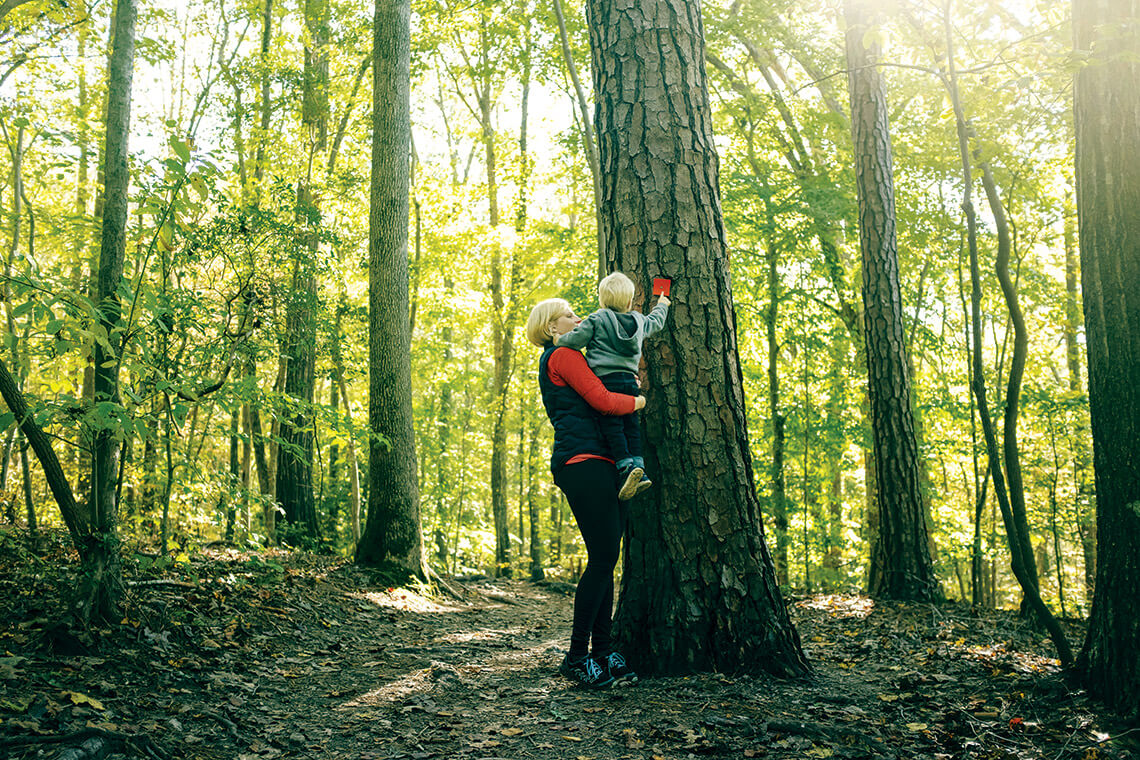 Patterson focuses much of his work on teaching children to love nature. Here, Christine Northrup shows her young son, Nicholas, a trail marker attached to one of the trees along Umstead State Park’s Company Mill Trail. photograph by Tyler Northrup

So The Money Guy is now The Parks Guy, and since that first trip to Umstead, Patterson and his staff have been busy making things happen. “Of all the land we now own,” he says, “we got 80 percent over the first 100 years. We got the other 20 percent over the last three.” In December 2021, state lawmakers set aside $29 million for trails. There are now 50 more employees in the field. “The main thing that I’ve done is gotten out of the way of a lot of people who were trying to do good things,” Patterson says. In other words, he’s tried to get his people the money to do what they know how to do, without as many strings attached.

The pandemic, though, pushed people outside like never before. With so many places shut down, parks became a refuge. That also meant that rangers and other Parks staff had to work through a trying time. “They were scared,” Patterson says. “But they went to work every day, and they gave an outlet to the citizens of this state. I’m so proud of them.” Now, he says, the increased attention on state parks “has only sped up what we were always planning to do.”

Patterson is looking forward, not backward, even though, when viewed through the lens of the past, his appointment is somewhat historic. He’s the first Black director of State Parks in North Carolina, a fact that doesn’t seem to move him much, but one that he hopes might move others. Patterson wants everyone in our state parks. All races. All backgrounds. All ages.

Especially kids. He wants to get every fifth grader in North Carolina to visit a park, and a lot of his ideas are designed to put children first. Patterson likes his job, and, although he’s not too far from retirement age, has no plans to leave it. The only thing that might change his mind, he says, would be a job where he could work more directly to help kids. “We can always do better,” he says of teaching and helping students. 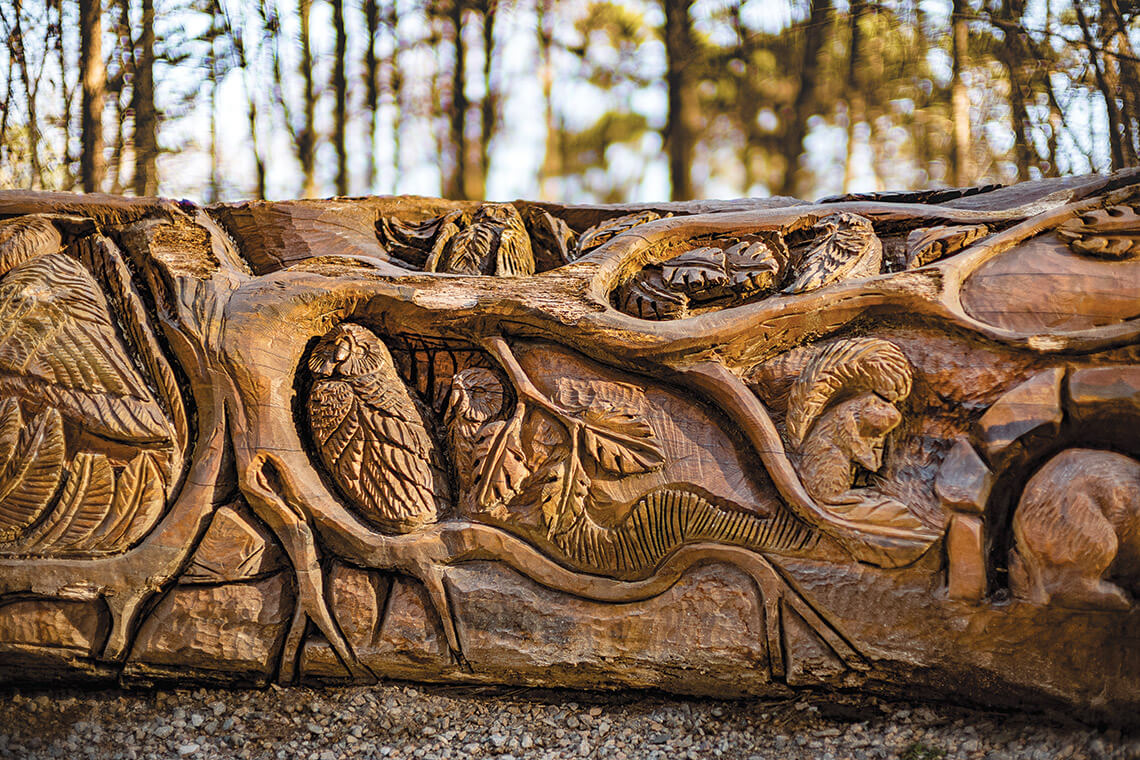 After a giant red oak fell onto a trail at Umstead Park in 2017, chainsaw artists Jerry Reid and Randy Boni transformed it into a sculpture featuring images of wildlife native to the area. photograph by Charles Harris

As for North Carolina’s parks, there are big things to come. An old guest ranch near Asheville will eventually become Pisgah View State Park, the first such park in Buncombe County. “It looks like Dirty Dancing,” Patterson says, “although I don’t know if they had any dirty dancing there.” He wants to help build new sections of the Mountains-to-Sea Trail. He’s watching as Pilot Mountain State Park recovers from a large wildfire last year. “If you go out there this spring,” he says, “you’ll see the grass growing. You’ll see the rebirth happening.”

All of that feels like a far cry from Patterson’s first few days on the job four years ago. At one point during his 2018 tour of Umstead, he spotted a fallen tree that’s well known to those who frequent the park. Two chainsaw artists had carved native flora and fauna into its massive trunk: A fox. A heron. A rabbit. Oak leaves. Hickory. The old log has become a must-visit attraction at Umstead, and as the gaggle of Parks bigwigs talked about the tree, Patterson broke away, walked over, and touched it. He looked at this thing that he’d never encountered before, in the woods, just far enough away from the wider world. This wasn’t the forestland of his childhood. But out there in the woods, once again, it sure felt like Paradise.