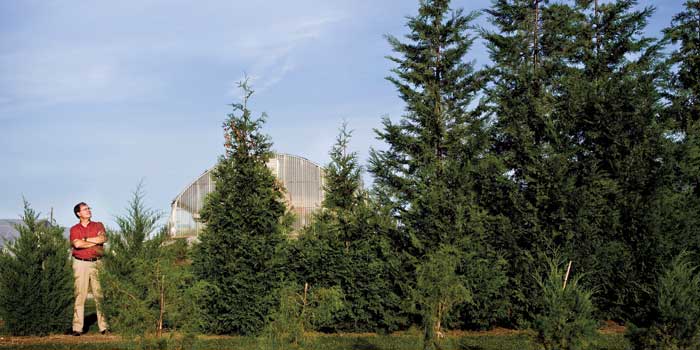 No plant brings out the harsh judge, the pitiless critic, or the uncompromising shopper quite like a Christmas tree.

You don’t just buy one. You shake its branches to test sturdiness. You yank out its needles to evaluate aroma. You circle it three times to size up fatness, roundness, and symmetry — an indignity no potted palm or cactus ever has to endure.

And of all the world’s Christmas trees, none delights the critic’s eye quite like the Cadillac of trees: the Fraser fir.

You can cut it in October, ship it in November, and come Christmas Day, the ornaments still dangle from its sturdy branches, every needle intact.

Every year, North Carolina grows about 6 million deep green beauties, most of them Fraser firs, a harvest that ranks second only to Oregon nationwide. State cash receipts for this crop total approximately $100 million.

Drive down any mountain highway, and you’ll see Fraser firs poking out of the front lawn. In some counties, a single grower’s tree supply numbers well into the millions.

But what you don’t see is the relentless science behind Fraser firs’ success, the minds behind the lush branches or the endless experiments that send tree doctors on globe-trotting trips.

At North Carolina State University, John Frampton leads the Christmas tree genetics program, where he and other Ph.D.s lovingly tinker with the traditional holiday flora.

His 15 years as Raleigh’s semiofficial Christmas tree thinker have taken him to Turkey, where he hired local climbers to shimmy 40 feet up foreign firs and toss down the cones.

He often hobnobs with other fir experts in Oregon, where, he grudgingly notes, “Their big growers are bigger than our big growers.”

He makes a fabulous ally for the hearty Fraser.

With a doctorate from N.C. State University and years of experience working for Weyerhaeuser forest products, Frampton could have chosen any tree as a lifelong research interest. He could have chosen pines. But no. Too hot on the Coastal Plain. Too many mosquitoes.

The Frasers he studies grow in cool elevations — as high as Mount Mitchell — surrounded by majestic scenery. Plus, they smell nice. They make for good company.

A few doors down from his office in Jordan Hall, a giant, two-door freezer holds hundreds of ziplock bags full of Fraser seeds and dozens of vials full of yellow pollen, ready to test for disease and pest resistance.

A few miles down the road behind the JC Raulston Arboretum, a greenhouse holds thousands of tubes full of tiny Frasers only two inches high, many of them samples from Turkey or Japan.

Thanks to the work done in Frampton’s program, growers in Avery County are starting to graft Fraser branches onto the roots of the Japanese Momi fir, which is highly resistant to rot.

The idea behind this laboratory of Christmas greenery: Make the world’s best tree better. Frampton and his fellow scientists want to reverse the fake-tree-buying trend, to put enough Frasers in enough homes that they outnumber the snap-together trees that come in boxes.

But that won’t happen if Carolina firs succumb to diseases or pests. Charlie Brown’s spindly underdog of a holiday tree may get sympathy votes. But it won’t pay the bills for the state’s 2,500 growers.

And it won’t please the picky shoppers. Before you tie a tree on the station wagon, you want it fat, round, and disease-free.

A fungus-like organism, it travels through ground water and lies dormant in the soil, waiting to infect a host. One of its favorite targets, which it manages to kill quickly and consistently, is the Fraser fir root ball. Once it strikes, the tree turns a sickly orange, the color of toxic waste.

But it doesn’t just kill the tree. It makes the soil useless. So a small Fraser fir grower loses a piece of his land along with his crop — sometimes as much as 20 percent or 30 percent.

“The phytophthora can put you out of business,” says Doug Hundley, a Christmas tree extension agent in Avery County. “It’s almost unavoidable. Once it’s in the soil, it’s always there.”

Enter Frampton and the genetics program.

If you can’t beat root rot in the field, you attack it from the laboratory. You set out to find a secret weapon, some scientific strategy to beat back the mountain mold and keep the Frasers green.

First, they had to find out just how deadly phytophthora could be. Frampton and his colleagues applied it to a few grains of rice and dropped them into the soil surrounding 100 Frasers from Roan Mountain.

“They all died,” Frampton says.

Next, they dropped fungus-laden rice into the soil with firs from all six of the growing regions in North Carolina: from the Smokies to Black Mountain to Grandfather Mountain.

“They all died, too,” Frampton says.

Next, he dosed a dozen firs from all over the world — trying out phytophthora on the conifers of India and Japan.

“We killed most of them,” Frampton says with a shrug.

But a few showed some toughness against the fungus, particularly the Momi fir native to Japan. Of all the world’s firs, it put up the best fight against phytophthora, dying out in comparatively small numbers.

The trouble, Frampton explains, is that Momi firs can’t grow in the North Carolina mountains. The early frost kills them.

On top of that, they’re not exactly pretty. Spiny to the touch with pointy needles, you wouldn’t think to hang an ornament on Momi branches without first pulling on a pair of garden gloves.

So Frampton took up grafting.

You can attach a few Fraser fir branches to the root ball of a Momi and grow a sort of Frankenstein’s monster tree that looks like a fat, round Fraser from the ground up but fights fungus like a Momi beneath the soil.

It’s a technique you can teach.

In Avery County, Hundley says a dozen-odd growers routinely graft 100 to 2,000 trees a year. The trick is the expense. Momi isn’t easily bought from Japan, and when it is, it winds its way to North Carolina down a convoluted, pricey trail.

To reduce expense, about 10 or 15 growers pool their resources to buy the Momi seedlings. Hundley boasts that the expense is now about $2 a plant, a manageable number for the state’s Christmas tree industry.

But this high-minded, campus-hatched plan to fight phytophthora is still in the learning stages, and Frampton isn’t ready to declare victory.

“The verdict is still out,” he says. “I’m keeping my fingers crossed.”

Inside the N.C. State University greenhouse, Frampton checks on the thousands of fledgling trees sprouting out of test-tube-like containers.

It’s more humid than a shower room where these finger-size Christmas sprouts grow, still too tiny and fragile for planting at age 2.

Here, you witness the slow progress of fir experiments, years in the making. These aren’t tomato plants that double in size in a week’s time. The typical Fraser turns 5 before it breathes real, outdoor air.

“When you get them started, you don’t have to jump out of the way to keep from getting hurt,” says Dennis Hazel, associate forestry professor and extension specialist at N.C. State.

Frampton walks down the rows of tubes filled with firs collected in Turkey that show great promise as phytophthora fighters. He points to another three-way cross between a Fraser fir and a pair of Greek and Turkish species, combined thanks to the pollen sent overseas from the Czech Republic.

Then he points to the ugly but useful Momi, looking more like a fern than a fir. With help from the Momi root ball, Fraser fir growing might spread down from the mountains, farther into the Piedmont and coastal counties where farmers grow cedars and pines.

You can see the thought Frampton and his fellow members of the N.C. State University genetics program throw into their work, the fussing over details.

They’re like picky shoppers on a Christmas tree lot that covers all of North Carolina, poking and prodding, measuring and monitoring, making lists and checking them twice.

Josh Shaffer is an award-winning writer for The News & Observer in Raleigh. Josh’s most recent stories for Our State were “The Barbecue Brotherhood” and “Follow His Lead” (November 2011).