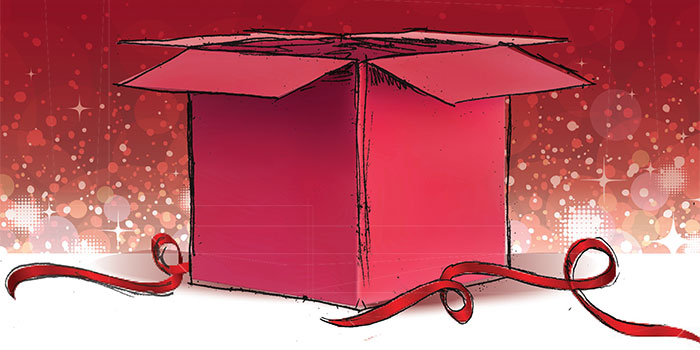 When I was a child, we had only red lights on our Christmas tree, which was radical at the time. Nothing compared to turning off all the lamps, clearing a space beneath the boughs, then lying on our backs and gazing up into that surreal crimson glow, our heads surrounded by wrapped gifts bearing our names. I’d give anything to have an overhead shot of our legs radiating like spokes from the conical tree, a geometric figure perhaps dubbed Noel’s Theorem.

Naturally, I carried this custom into my marriage. As penny-pinching newlyweds, we had the red lights, but we had only red bows as decorations. I appreciate minimalism as much as anyone, but I’ll tell you this: Minimalism loses its charm when it’s required. When they were young, the children adored the garish red spectacle, which, from the street, looked like a nuclear meltdown. But with adolescence, they wanted to be like everyone else, with braces and tutors and white lights on the tree. Now, they appreciate the red lights again.

Christmas is about traditions, those rituals that must be preserved and passed along every year. Even new boyfriends or girlfriends don’t get a pass. “And what does your family do for Christmas?” my mother will ask.

Our Christmas traditions start with the decorations. First come the manger scenes out of the decorations boxes. I treasure an email from my sister about her 6-year-old placing the major players just so. “Aurelia set up both manger scenes and this is how they look: all the onlookers including animals are lined up in single file with their backs to us at the base of the stable peering, no, staring, at Mary and Joseph and Jesus.” Well, why not? I’d wait in a line to stare at the Christ child, too.

One year my daughter’s friend Wallace rigged up the angel Gloria (so named because the scrolled banner she held read “Gloria”) on a zip line made of tacks and fishing line so the angel could fly down, so to speak, from the mantel to the crèche on the coffee table.

But seeing a live crèche is worth every effort of getting into the car on a frigid night and finding a parking place at Greensboro’s First Presbyterian Church.

It. Is. Freezing. The manger seems to vibrate with the cold, although perhaps it’s merely the electrician’s light, complete with safety cage, set snug in the swaddling clothes to give off a divine radiance. Teenage Mary and Joseph stretch their numb fingers toward the bulb, hoping divine radiance produces heat as well as holiness, and they cast envious eyes at the shepherds, who have not only a live, furry donkey to huddle against, but also an actual small fire in a stone pit. Somewhere in the crowd no doubt stands a rep from the Department of Social Services waiting to haul off these frostbitten Nativity players who’ll never forget their roles this night.

And what’s more traditional than the church pageant? Nowadays, inclusivity has leveled the pageant playing field. No longer do we have merely the holy family, three wise men, plus a couple of sheep and shepherds. It’s a cast of thousands at our church, including stars, trees, and Egyptians. One participant wailed, “I spent an hour on the Internet researching what an Egyptian is supposed to look like, and I still look like a shepherd!” Sheep wearing fuzzy bath mats have to crawl down the aisle on all fours past a tittering congregation. “I refuse to be a sheep again,” my child insisted, and I patted his bath-matted back sympathetically.

But surely the most revered yet roundly dreaded tradition is the Christmas card picture. For 25 years, my sister has committed to an “action” Christmas card, and therein lies the danger of ritual. Her family has sent holiday greetings depicting them rollerblading, going down Sliding Rock, paddleboarding at Wrightsville Beach, jumping on a trampoline, holding hands underwater, rock climbing at the Whitewater Center, eating doughnuts at Krispy Kreme, and in one desperate year, sitting in barber chairs wearing smocks. It’s shameful to admit, but the contents of the Christmas card basket gets more scrutiny than Luke 2:1-20 at our house. Altogether now, to the tune of “The 12 Days of Christmas”: 22 Christmas trees, seven garlanded staircases, two Grand Canyons, 11 beaches, three graduations, 16 dogs, five stockinged mantels, one debutante, three weddings, and four what-we’ve-been-doing epistles.

The clearest memories of Christmas, those cemented in our consciousness, stem from childhood, the time when, in the same way Thursday trumps Friday, the sweet expectation of Christmas Eve was nearly grander than Christmas Day itself. The sure knowledge, a thrumming in the blood, that the most longed for day was coming, combined with Christmas Eve’s daylong fire, the early darkness, and the presents I’d arranged and rearranged just so, only contributed to the exquisite thrill of waiting.

Many of my childhood memories take place in my maternal grandparents’ house in Walnut Cove, where we trekked each Christmas, a long ride from Rutherfordton during which my sister and I marked off territory in the backseat (“I dare you to cross this line,” while from the front my father threatened to jerk a knot in us). We entered through the screened porch in the back, where a number of assorted edibles for which there was no room in the refrigerator — ham, rolls, beans — sat on an ancient red Formica table rimmed in silver metal. Those of us at The Children’s Table savored icebox cake and the adults ate ambrosia. Citrus with coconut shavings? That’s dessert?

Now and again we spent Christmas in Greensboro with my father’s mother, Nannie, and I remember receiving a Swiss alpine outfit from her one year, complete with a little vest and dirndl and eyelet blouse, that she’d brought back from her travels. And I’ll say this for Nannie: She had bellows. Whatever happened to bellows? That wonderful, wheezing, accordioned fireplace tool my sister and I fought over inflating, pointing its nozzle at the fire and ourselves, whooshing ashes and soot and sparks over the hearth and the furniture and our Swiss alpine outfits … Come to think of it, that probably explains why you never see bellows anymore.

Everyone experiences that year when they’re away from home at Christmas for the first time. You think you’ll break apart because you’re not with the people you love best in the whole wide world, because you won’t have Moravian sugar cake and grits with half-and-half for Christmas breakfast, and because your stocking won’t be hanging from the poker beside the fireplace. And after all is said and done, opened and eaten, you discover that Christmas somewhere else is in fact bearable, and you realize that it was the anticipation of the altered memory that was so frightening, making you fear that Christmas itself wouldn’t come were it not carried out in precisely the same manner it always had been. And you survive, and are joyous. I would like to tell you that’s how it happened the initial (and only) Christmas I went to my Fayetteville in-laws’.

Actually, I cried the entire time.

We need no expert to tell us that Christmas can be melancholy. Every loss, every absence, whether temporary or permanent, becomes magnified and intensified. Whether merely forgotten or abandoned by necessity, each lapsed tradition carries a bittersweet memory. As we’re permitted to even wrap up the dry cleaning, as one friend does, and spend too much, and overeat, we’re also permitted to be sentimental and nostalgic at Christmas. The construction-paper ornament featuring a photograph of my kindergarten son in Osh Kosh overalls, the glue spots where macaroni curls have long since been nibbled away by attic mice, and the Christmas card from an old friend who has written inside nothing more than “I will think of you always” bring me to tears.

During these moments of memory and retrospect, I yield, and play my homemade Christmas CD, with Judy Garland singing a wistful “Have Yourself a Merry Little Christmas”; James Taylor singing “Auld Lang Syne”; and an English boys’ choir singing these words: “In the bleak midwinter, frosty wind made moan, earth stood hard as iron, water like a stone.”

But what I hope is that, like the good kind of tired, the melancholy is the good kind of sad. Deserved and permissible and natural. A personal sort of bittersweet, and an intimate sadness small enough to hold in your palm like a snow-globe scene, encapsulated and temporal. Then I hope that for you, like for me, the UPS deliveryman rings the doorbell, stands there in his all-brown outfit on skinny bare legs, and says, grinning, “Do I look like Santa Claus to you?” Or that you open that door again and find mistletoe tied to its handle, a surprise gift from the tree service that removed a tree for which I’m still grieving. Immediately I’m in the woods again with my long-dead father while he shoots mistletoe from tree branches. I unclasp my grip on his flannel-coated hand warmer, smelling faintly of lighter fluid, only to fetch the elusive branches. And I hope for you an enduring vision of delight, like the one of my mother, at 70, jumping on a trampoline one below-freezing Christmas morning only hours after Santa had assembled the contraption by car headlights.

It always seemed to be nighttime when we returned from Walnut Cove, and in my memory those trips rivaled Christmas Day itself, with a different sort of pleasure. The dark car was filled with an intimate, quiet, satisfied exhaustion. Beside me, my sister slept, and somewhere around Mocksville, I pressed my cheek to the cool glass of the window to watch the occasional homes — no neighborhoods here — pass by, a tree softly gleaming in each front window, an illuminated manger scene set up on the front yard near a statue of a deer. Behind me, the back of the car was full of treasure and leftovers, and in front of me, the shapes of my parents’ heads were silhouetted in the faint dashboard lights. Heat blew over the toes of my Sunday-school shoes. Of course we’d driven to McAdenville earlier in the season and witnessed the mad exuberance of its famous lights. Yet these silent, solitary scenes of small country homes, glowing like Bethlehem’s star, were far preferable; they were comforting, reassuring, more enduring, somehow, reminding me that while I’d been celebrating the day, so many others had been as well. We’re all in this season together.