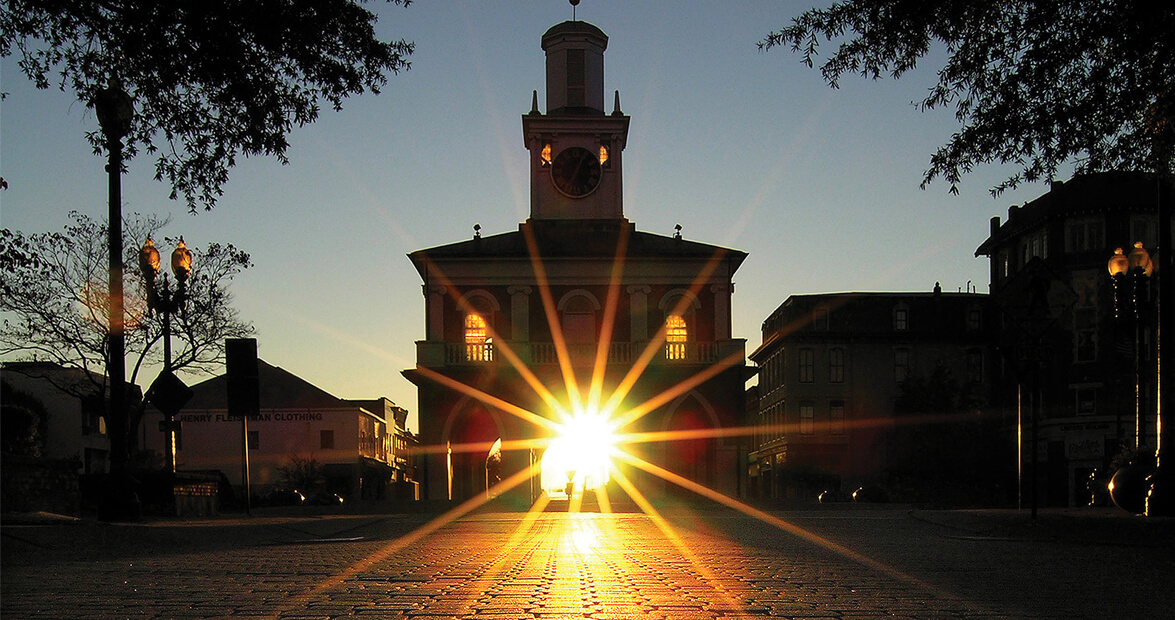 “So, where are you from?” A simple question, but it used to make me anxious. Can I get away with saying, “South of Raleigh”? I wondered more than a few times.

Around North Carolina, when your answer is “Fayetteville,” you never know how people might respond. They probably won’t speak of the good things: long walks along Cross Creek at the Botanical Gardens, or Dixie Youth baseball at Honeycutt Park, or the World War II veteran on Pinecrest Drive, who spent his mornings waving at every car that passed his yard. They might just say, “I was stationed there once,” before quickly changing the subject. Worse, they might make a reference to “Fayette-nam” or some other tired joke about the city’s decades-old reputation as a rough town.

When I first left Fayetteville, I was eager to join in on the joke. It only seemed natural. Knocking the city’s bad reputation had become a Fayetteville pastime by the time I made it to Terry Sanford High School in 1996. On summer nights, killing time under the pine trees at Woodrow Park, we would talk of how eager we were to leave.

For many, Fayetteville is a temporary town. As much as 30 percent of the population changes every year. That’s mostly because of the churn of deployments and reassignments from the massive Fort Bragg Army base just northwest of town. The constant coming and going of the Army families on base and off meant that new faces would appear in the neighborhood or classrooms in the middle of the year. They would talk of time spent in Germany and Japan and other exotic locales, then disappear again before summer, when the Army told their parents to move.

A handful of local radio stations broadcast from towers on Bragg Boulevard or the 12-story Wachovia “skyscraper” on Green Street, but the Raleigh stations came in clear. The city had no TV station of its own, either, so most of our news came from Raleigh, 60-some miles away. Only the most sensational Fayetteville stories made the newscast.

All those years, we let others tell Fayetteville’s story. And they never seemed to tell the real story: of the city’s resilience, and its capacity for reinvention.

On a Saturday afternoon, I’m doing something I never would have done back when I lived here: walking down Hay Street, the city’s main drag, with no real destination in mind. There’s a crowd eating lunch outside of the Blue Moon Café. Across the street, couples are sipping cappuccinos outside of Rude Awakening coffee house, and families are buying tickets for a matinee at the Cameo Art House Theatre. It’s hard to imagine that Hay Street used to be the roughest street in town. 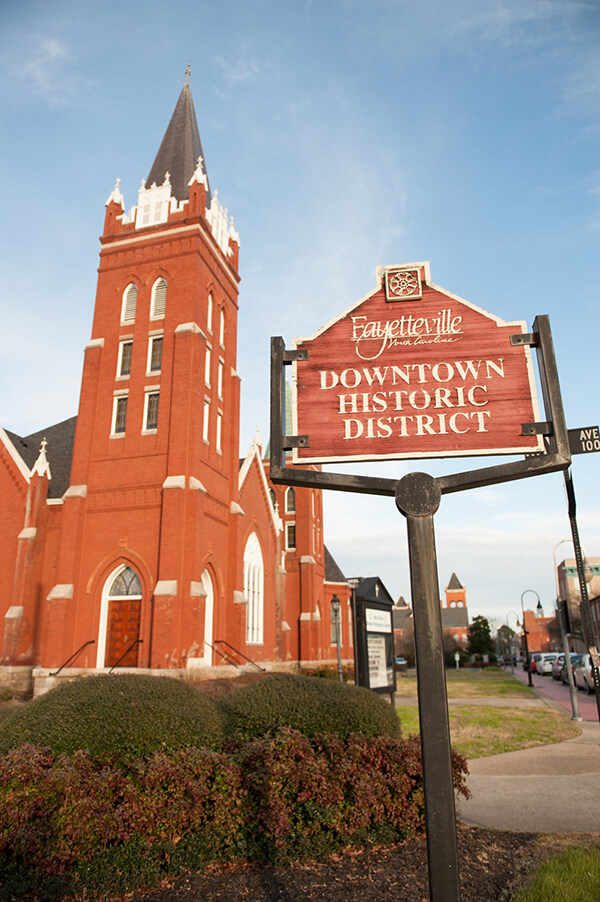 It sure is different from how it used to be, I say to several of the shopkeepers and baristas. They respond with quiet sighs. These downtowners are tired of talking about it. History is great and all, but nostalgia’s a trap, especially when it’s nostalgia for the bad old days of Hay Street — back when the Cameo was Dixie Billiards, and the smaller storefronts held seedy bars. That’s not Hay Street anymore, they say; that’s not Fayetteville.

“Perceptions die hard,” Brian Smith says over the whir of an espresso machine and the hum of conversations at the Marquis Market on Person Street. “Those days had a mythical effect on people.”

If that old reputation is still keeping people away, it’s hard to tell this afternoon. The market is filled with customers eating pastries and tapping on laptop keys or lounging in the sleek chairs near the front of the store. Smith is busy setting up tables for a party on the shiny, brushed concrete floor. 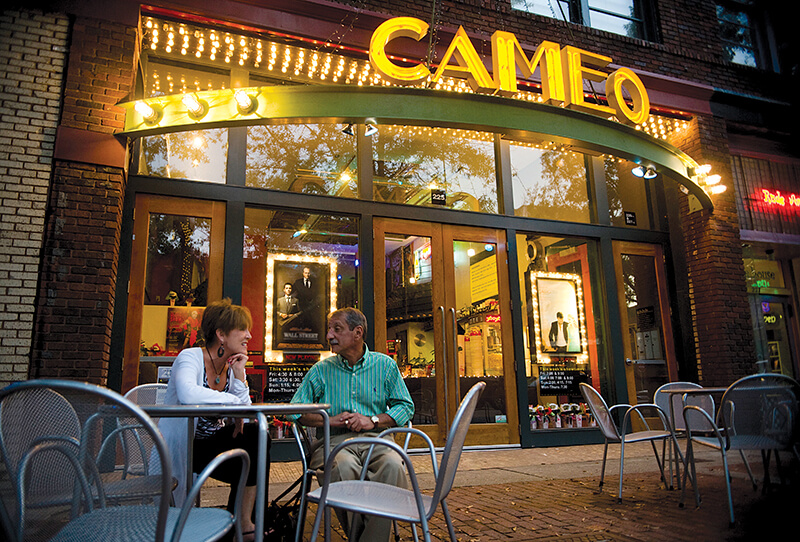 The Cameo Art House Theatre on Hay Street occupies a space that once housed one of Fayetteville’s earliest movie theaters, the New Dixie, which opened in 1914. Photograph by James Robinson / The Fayetteville Observer.

This building, a former department and furniture store, was close to falling apart when Smith found it in 2012. Yet Smith saw potential in it, and in downtown Fayetteville’s narrow streets and wide sidewalks and underused historic buildings. He saw an opportunity to create something new, something modern, something urban. More than that, Smith wanted to create something Fayetteville. The name of his business, Marquis Market, pays homage to the town’s namesake, the Marquis de LaFayette. Along the windows, burnt orange designs spell out “Fayetteville” in large letters. The rest of the block is coming along, too: Across the street, there’s a new sandwich shop in a formerly vacant building, and crews are renovating other storefronts. All of these are steps, Smith says, toward Fayetteville defining itself.

As people come and go, Fayetteville has had a fluid identity. And it always felt different from the rest of North Carolina. Maybe it was all of those out-of-state license plates crawling bumper to bumper along Morganton and Skibo roads. Or the unexpected booms of training exercises in the distance that rattled the windows.

One thing is for sure: Fayetteville is still very much a military town, just as it’s been since a tiny artillery field called Camp Bragg opened in 1918. By the most recent count, more than 53,000 full-time, active-duty soldiers are stationed at Fort Bragg. Not to mention their families and the thousands more civilian employees working on the base, or the many former soldiers who settled here after their enlistment was up and became teachers and police officers and business owners. You don’t have to look far to find someone connected to the Army, and the city is proud of that. 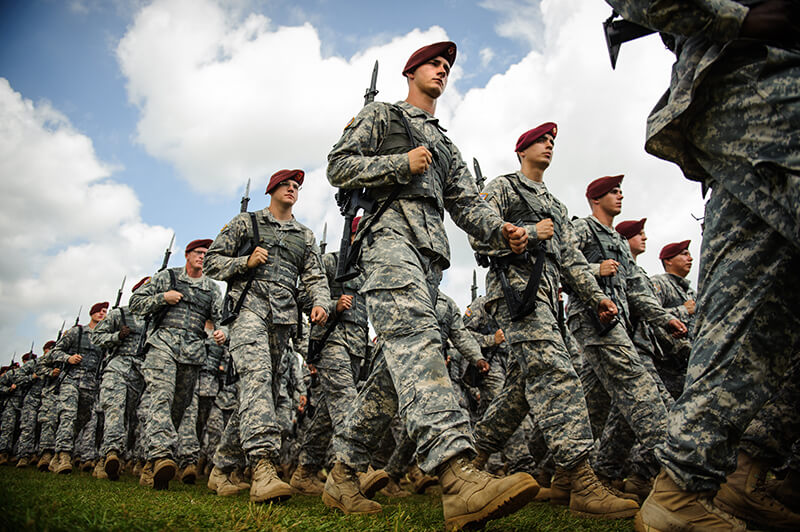 The patriotic history of Fayetteville begins well before Fort Bragg. Back in colonial days, the Highland Scots who settled around the area were fiercely loyal to England. But in the villages of Cross Creek and Campbelltown, there was enough independent spirit that in 1775, a group signed the Liberty Point Resolves — calling for independence a full year before the national Declaration of Independence — right there on what would become Person Street. Later, after Americans won their independence and the two towns merged to become Fayetteville, state representatives met there to ratify and sign the new state’s constitution.

“Fayetteville is no more,” one observer wrote to a national newspaper after the fire of 1831. That writer spoke too soon.

The town also played a key role in North Carolina’s early history. By the 1820s, Cumberland County was one of the most populous in the state. Because Fayetteville is about as far inland as you can get on the Cape Fear River, wagons crowded the city’s narrow streets as farmers from miles around brought their goods to sell. Fayetteville was a vibrant place until one Sunday morning in May 1831, when sparks from a kitchen fire danced across the narrow alleys and turned the clusters of pine structures into a tinderbox. More than 600 buildings burned that day — hotels, stores, schools, and nearly every house. Even the bridge over Cross Creek smoldered and crumbled.

“Fayetteville is no more,” one observer wrote to a national newspaper after the fire had burned itself out. That writer spoke too soon. The city rebuilt quickly. By 1832, the biggest symbol of that recovery, the Market House in the center of town, was complete, the spires of its clock tower visible for miles away. The Market House has been situated there since, overlooking almost two centuries of change on the four streets that converge at its feet: Person, Hay, Green, and Gillespie.

Fayetteville knows how to bounce back. The city has needed that resilience, having faced more than its share of hard knocks. Thirty years after the Great Fire, in the closing months of the Civil War, General Sherman and his troops saved their worst for the Confederate stronghold. The Union troops ransacked houses and burned the newspaper offices on their way up Haymount Hill to destroy the Fayetteville Arsenal. Years later, the flood of 1908 left the city’s streets submerged. Each time, Fayetteville rebuilt.

• • •
For Bruce Daws, historic properties manager and director of the Fayetteville Transportation and Local History Museum, the key to Fayetteville’s future is in its history. In the late 1990s, the city demolished a block of rundown bars to make way for the Airborne & Special Operations Museum in an early effort at reshaping downtown. The museum sparked many more projects in the area. Along its oldest blocks, Fayetteville focused on historic preservation, as if it could shake off the baggage of the recent past by reaching further back in history. Over the years, many Hay Street businesses had blocked their 19th-century storefronts with metal frames and gates. When those came off, a quaint streetscape emerged.

It wasn’t as easy as it seemed, Daws says. Each triumph required hours of behind-the-scenes work and dedication. And maintaining these gains will require more work.

Last year, I found myself at an event in Uptown Charlotte where a well-dressed New Yorker asked me that “where are you from” question again.

“Fayetteville,” I said, bracing for the blowback.

“I was there for a wedding last month,” the New Yorker said. “Nice town.”