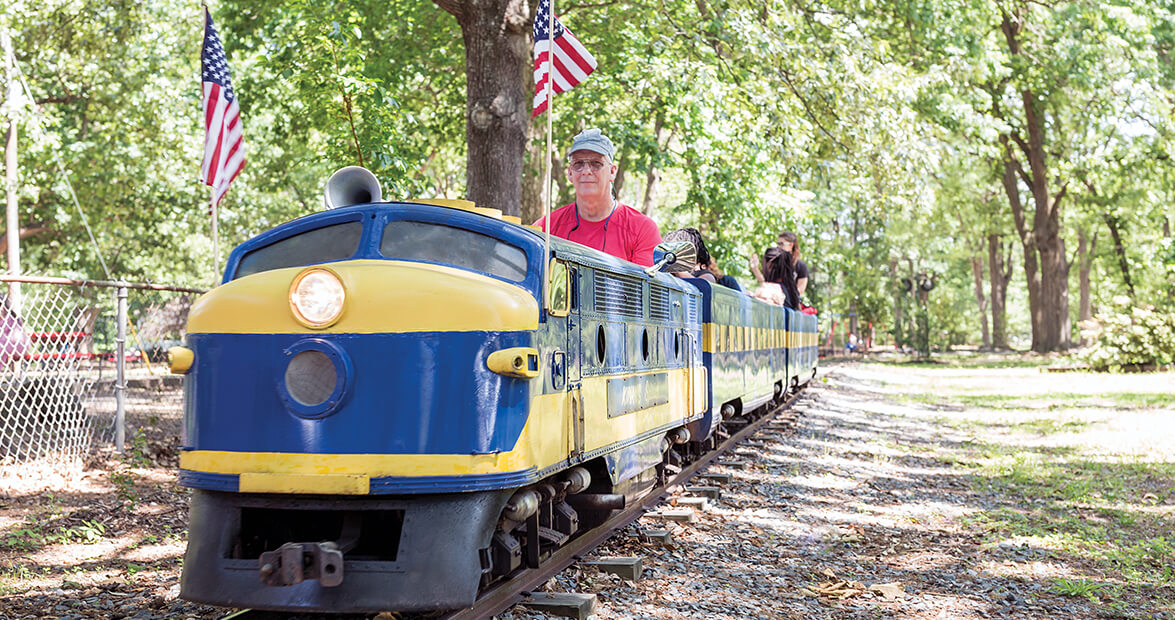 If you want to see Goldsboro, you gotta hop the tracks. Goldsboro’s a railroad town, built on the tracks between Wilmington and Raleigh, named after Matthew Goldsborough, a railroad man. During the Civil War, Sherman had Goldsboro in mind when he burned through the South, hoping to get ahold of those bustling tracks. He did.

We loved our tracks. We hated them, too. One April night 90 years ago, a group of unnamed Goldsborians got so fed up with the dirty, noisy trains blowing into town, setting fires, and sooting up their clothes, that they sneaked into the darkness and pulled those tracks up. They stacked them in a neat pile over on Center Street. “The train company sued the city over the missing tracks, so Goldsboro just paid it,” says Emily Weil, author of several historical books about Goldsboro. “We thought it was worth it.”

Today, you can’t get to my Goldsboro, a magic city full of charm and possibility, the Goldsboro behind the chain-restaurant façade, from any direction except due east without bumping over or gliding under railroad tracks. 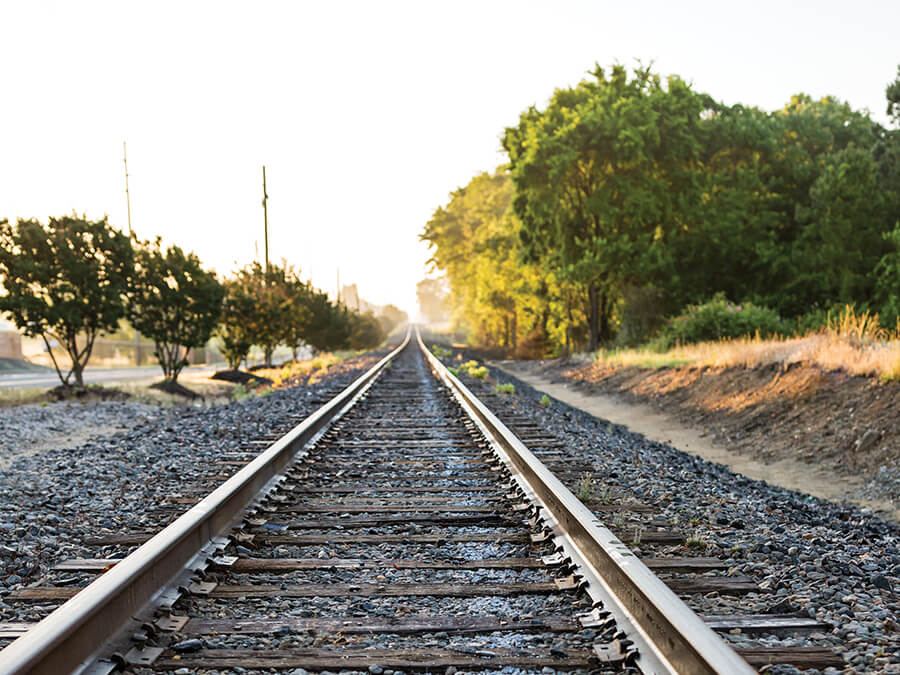 Although passenger trains no longer run to and from Goldsboro, the tracks serve as an enduring reminder of the city’s past. photograph by Eric Waters

Come to Goldsboro with me, and you’ll get the tour. That house on the corner of Audubon and Mulberry? That’s where Andy Griffith lived. Oh, and look over there. That place used to be a drive-through funeral home during the Vietnam War. See there? That yellow house, the Bizzells’ old house that can’t sell, used to have a coffin right there in the living room. We’re not sure why, but everybody says so.

And there by Stoney Creek’s where I was once surrounded by emerald green damselflies. When the creek floods, you won’t believe the strange animals that slither and crawl up from its bed. If you go up a couple blocks to Claiborne, you’ll see houses on a big, long ridge. Those are the old breastworks, where we tried to protect ourselves during the Civil War. The tour goes on, past old Skinny’s Drive-In on Ash Street, past the courthouse on William and Walnut streets, where the statue of the soldier out front has been known to set his gun down and put his hands in his pockets on cold days. You’ll get banged around back and forth over train tracks the whole way.

Sitting on a porch in the afternoon, you’ll hear the mournful, natural hoo of mourning doves, the yearning train whistle, and Seymour Johnson’s bold jets ripping the sky over Wilber’s Barbecue. Follow the miniature train’s tracks around Herman Park; listen to water pouring from the Lady in the Park, surrounded by her fish and wishing coins and roses; and watch tiny frogs erupt from the leaf litter like living acorns. Wave to those on foot, beating their own cadence on streets named for plants or people, where the long-gone tracks used to rumble and shake with cars. The sun dapples here. The food’s fresh and good and any way you like it. Where churches don’t steeple the sky, trees do, and they ask the same questions.

We have plenty of tracks, but we Goldsborians don’t pay them much attention now. The trains come through, but we’re not sure what they bring. Still, the tracks remain. We touch them or see them every day. They spread and snake like stiff, old roots, and, like roots, they find Goldsboro’s exposed as well as its forgotten and ignored. They’re fixed to the earth in fields and over streams between derelict warehouses and Cherry Hospital, where fox squirrels pounce and peek through the tall grass like kittens. Boxcars move slowly past Old Waynesborough’s shad fishermen, and engines call back to ghosts whispering and hooting in the beech branches along the Neuse. 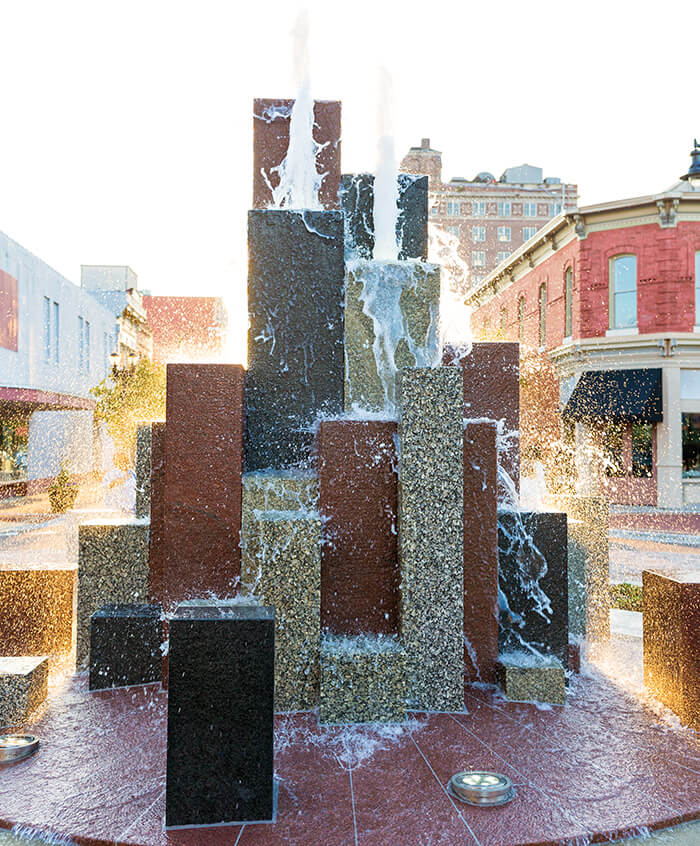 Built last year, a fountain called Cityscape serves as the centerpiece of a roundabout at Center and Walnut streets. photograph by Eric Waters

The tracks race cars down busy Royall Avenue and are adored by schoolchildren, who know to scramble to the back of the school bus if they want to bounce like gleeful popcorn kernels when their driver bumps over a crossing. These tracks curl up like a big dog and rest in a heap beside downtown.

Train tracks might not move, but they can lead anywhere. Downtown Goldsboro wraps itself with that opportunity. Lately, Goldsboro’s mended its old, with restaurants and fountains and a piano right out by the street, where folks bang out songs by Gershwin and Ben Folds. The train station, where no passenger trains have stopped since the 1950s, is now rebuilt, and it shines like a new penny. It will wait for buses and hope for trains.

Goldsboro’s not my home anymore. I took 70 West out of town almost two decades ago. Maybe there’s strength in never looking back, but I look back all the time, and I reach. In the larger cities I’ve lived in since, sharing feels charming, and everything feels shared. The green spaces. The farmers markets. The favorite hot dog joint. All polished and friendly enough, all joined by an affable communion of strangers and friends. Most of the time, I don’t want to share. 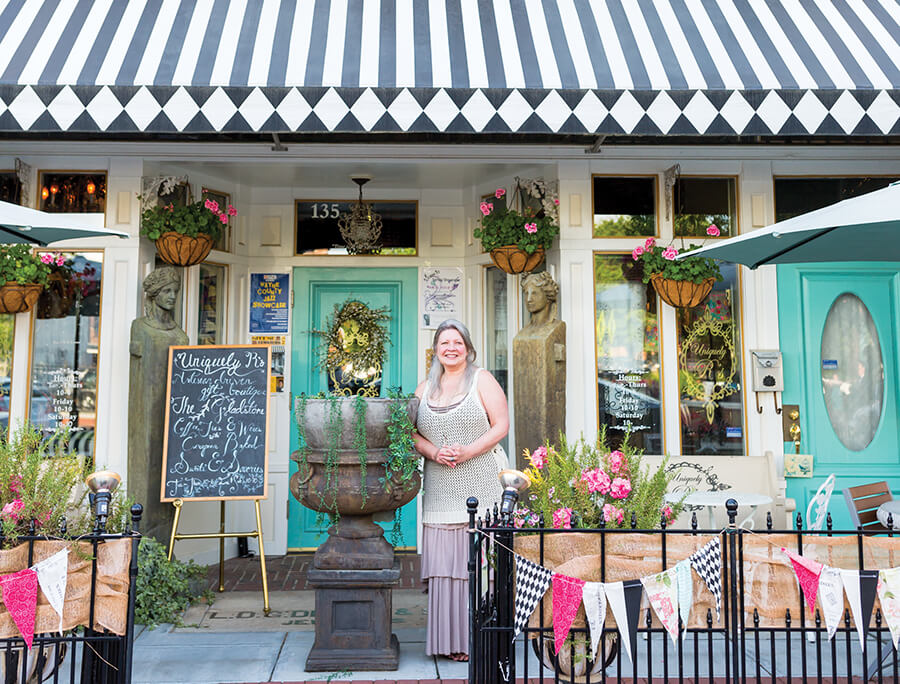 Train tracks might not move, but they can lead anywhere. Downtown Goldsboro wraps itself with that opportunity.

In Goldsboro, I have things that are all mine, just for me. The stray dogs sleeping and warm on my Aunt Ann’s grave in Willowdale Cemetery, where 800 Confederate soldiers lay buried in one big pile. The young girl rubbing her tired mother’s feet on their front porch on George Street. Highways of robin and Carolina wren footprints hopped into a dusty driveway. The love you can feel for a person only because you recognize her, or because you see his generations throbbing out of him, or because you’ve watched them wandering your streets for 30 years. The hope and longing of a small, old town, and the potential ringing in the steel of those tracks.

These things all belong to me. I keep them with me, and they keep me in Goldsboro. There’s plenty for you here, too. Look yourself. Bump on in. Slow down here. Hop. Those. Tracks.

Grab a Bite in Goldsboro 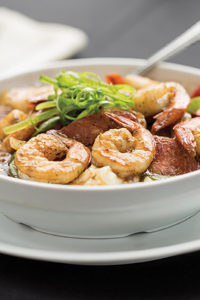 Ed’s Southern Food & Spirits
Located in the old Central Lunch and Goldsboro Drug Co. buildings in the heart of downtown, Ed’s serves up farm-to-table Southern cuisine and seafood inspired by coastal Carolina. The fourth generation of his family to work on Center Street, owner Ed Cogdell is passionate about supporting local farmers and fishermen, and his food is catching the eye of some big fish — Chef Andrew Zimmern and the crew of the Travel Channel stopped by in April. (919) 947-5143, edssouthernfoodspirits.com.

B&G Grill
Locals have long loved the Southern cooking and hospitality at this downtown eatery, just off Center Street. It’s packed most days, but take the hint — the food is worth the search for a seat. The home-style breakfast and lunch favorites bring to mind the old saying: If it ain’t broke, don’t fix it. (919) 736-2036. 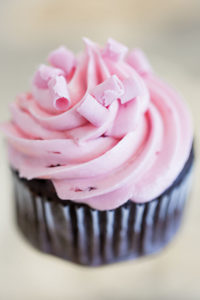 Mickey’s Pastry Shop
Passing this sweet-smelling bakery without stopping is a test of willpower. Since 1946, Mickey’s has offered customers made-from-scratch doughnuts, cookies, cakes, pies, and pastries. Today, it’s one of only a handful of bakeries in the country that employ two Certified Master Bakers — Mickey’s son-in-law, Jerry, and his granddaughter, Melanie — and is the first bakery to have three generations of CMBs. (919) 759-4741, mickeyspastry.com.

Pick up a gift or two, and take home a piece of Goldsboro.

Uniquely R’s and The Gladstone
This boutique offers artisan-made gifts for home and garden, such as terrariums, jewelry, dishware, furniture, and clothing. Bonus: You can grab a light, European-style lunch or dessert and a cup of tea or French-press coffee at the cozy café tucked inside. Sit out on the sweet patio, and take in downtown. (919) 739-9070.

Goldsboro Farmers Market Mini Mobile Market
If you find yourself in Goldsboro on a Wednesday, you’re in for a treat. In addition to the fresh produce, eggs, homemade jellies and preserves, cheese, and more at this mini mobile market at Herman Park, be sure to stop by the Love’s tent for some fried-in-front-of-you pork skins. Trust us. 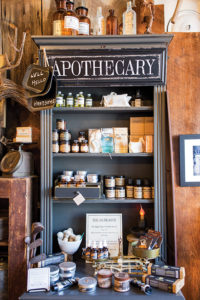 Before there was Goldsboro, there was Waynesborough. The original county seat prospered in the 1800s, but disappeared after two nearby railroad lines were completed, intersecting a mile away at the new town of Goldsborough. Today, the area is a park with four miles of trails, scenic overlooks of the Neuse and Little rivers, and plenty of wildlife. Although no structures remain from the old town (legend has it that General Sherman burned the empty buildings), the location now hosts nine historic buildings from across Wayne County, and tombstones from the mid-1800s can be spotted along the trail.