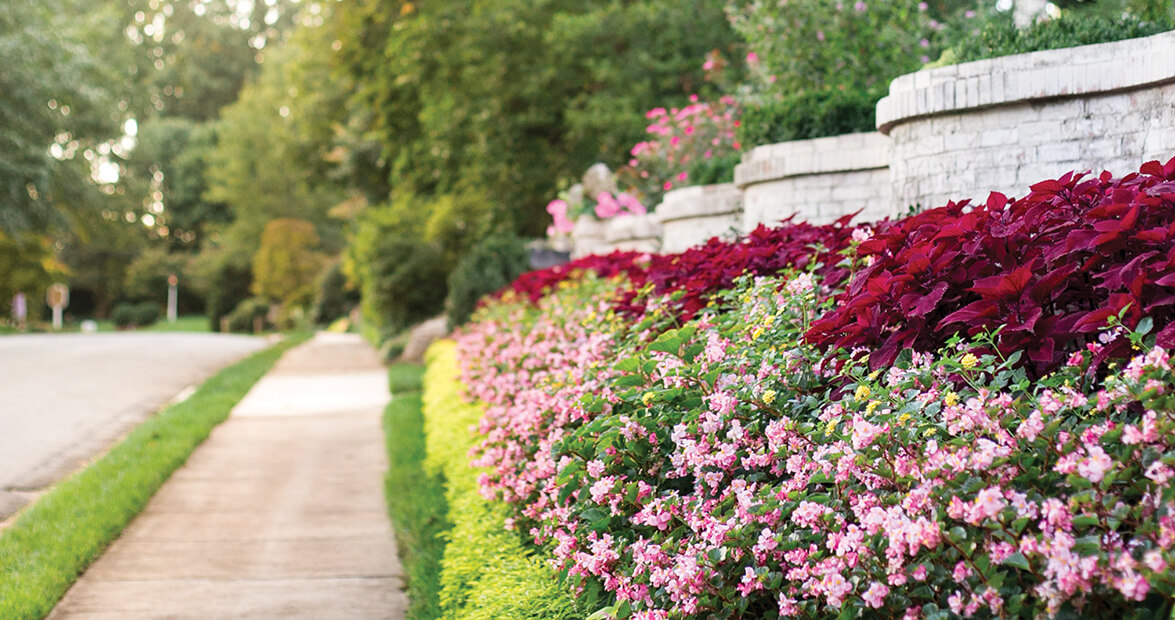 Greensboro is a city that faces the street. Sure, we’ve got our hiding places: We love a backyard party, an impromptu dinner table strewn with jelly jars of wine. We frequent secret and less-secret trails tracing reservoirs and disused railway beds. A handful of us even know that beyond the single sand trap and green visible from West Market Street, there are the remains of a lost golf course tucked behind what’s left of a park at UNCG.

At its core, though, Greensboro is a front-yard town, a front-porch town. It’s a curb town, if you want to get down to it. We sit out on the front steps, implore the dogs to stay put. We garden in that city-owned rumble strip between the sidewalk and the street. Often enough, when we walk in the evenings, we don’t even make use of those sidewalks. Often enough, we walk right out in the road.

Here’s how attached to the curb this town is, even if the following is so small a sample size as to cause statisticians everywhere to rend their garments: There’s a man down the hill from where I now live who has been building a river, in his front yard, for as long as I can remember. Or maybe it’s just a creek. The nomenclature doesn’t much matter. What I know: There are hand-stacked rocks, a waterfall, moving water (when it’s on), a brief pond, meandering twists and turns. He’s digging the thing out of his lawn. Endlessly. There is no natural source of water. 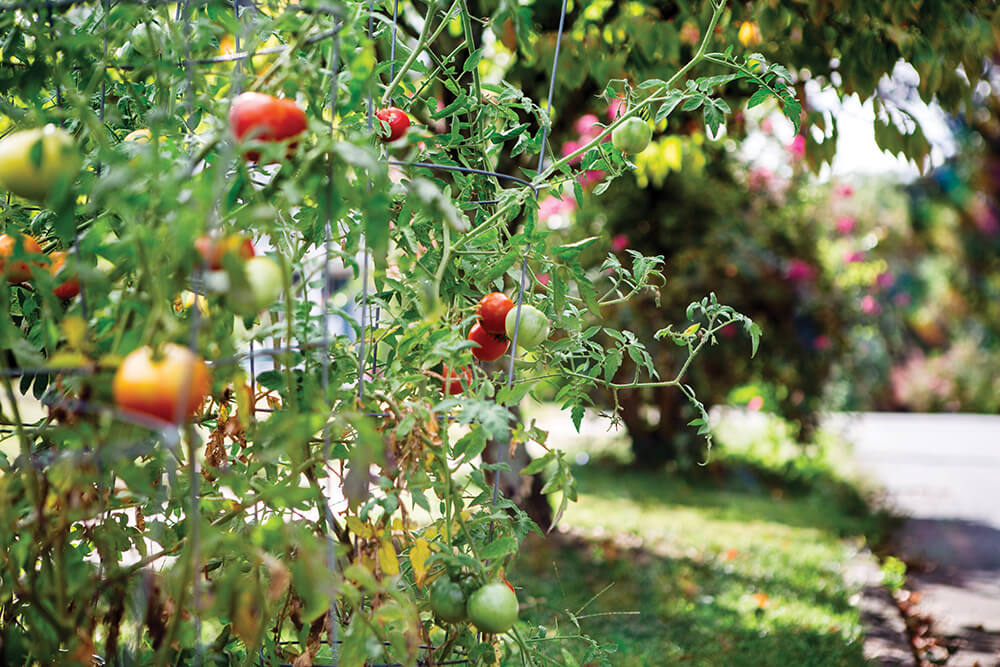 The grassy strip between sidewalk and curb is a good place to grow tomatoes, as the author discovered in his yard in Greensboro. photograph by Marissa Joy Kaplan

I did not walk down there to interview him. And why not? Because in this instance, I don’t want to know about the why. All I want to know is that what he does with his time is build this river. I don’t want to know if he’s also the man who plays bagpipes, also in the front yard, or if that’s the guy next door. I like the mystery. There’s a strange magic about Greensboro, a kind of willful suspension of disbelief that attends to living here. In grad school in the late ’90s, a group of us used to walk the dogs at night, emerge on one of the hills of College Hill that affords a view of downtown, and look out at what was then known as the Jefferson-Pilot Building. It looked — to us, anyway — like a tugboat. We built a myth: that The Tug sailed around at night, pushed all the wayward downtown buildings back into place. Like anything else one loves from childhood, I still can’t let that idea go.

Bagpipes. Phantom rivers. Tugboats. It’s a town of tall tales. How are your tomatoes? How’s your mom doing? From such simple questions grow the friendly, fanciful lies we tell each other from the curb.

• • •
If every city has a heart — and no city has just one — then among Greensboro’s is the Farmers Curb Market, or just the Curb Market. Housed in the former armory on Yanceyville Street (across from War Memorial Stadium, the finest former minor league ballyard in all the land, now home to the NC A&T Aggies), the Curb Market looks like any other farmers market in any other city anywhere.

Except you can’t quite really park there, and end up parking in a stand of oaks just up the street. Except that at the Curb Market you can, yes, buy eggs and peppers and organic lamb, but you can also buy the recycled stuffed-animal bunnies my sons’ former preschool teacher makes. You tend to run into poets and joggers, parents and presidents — or at least candidates for same. At the curb market is where the glorious (let’s be friendly about this) North Carolina political spectrum comes full circle: often-blue Greensboro meets the sometimes-less-blue county happily here over collards and sweet potatoes and heritage pork and Quaker chicken and raw-milk cheese and artisan bread and cut flowers and handmade soap. Perhaps politics knows or cares more about shouting, and less about food. Perhaps, at the Curb Market, there’s room for only one of those. Perhaps a good German Johnson ends any disagreement. 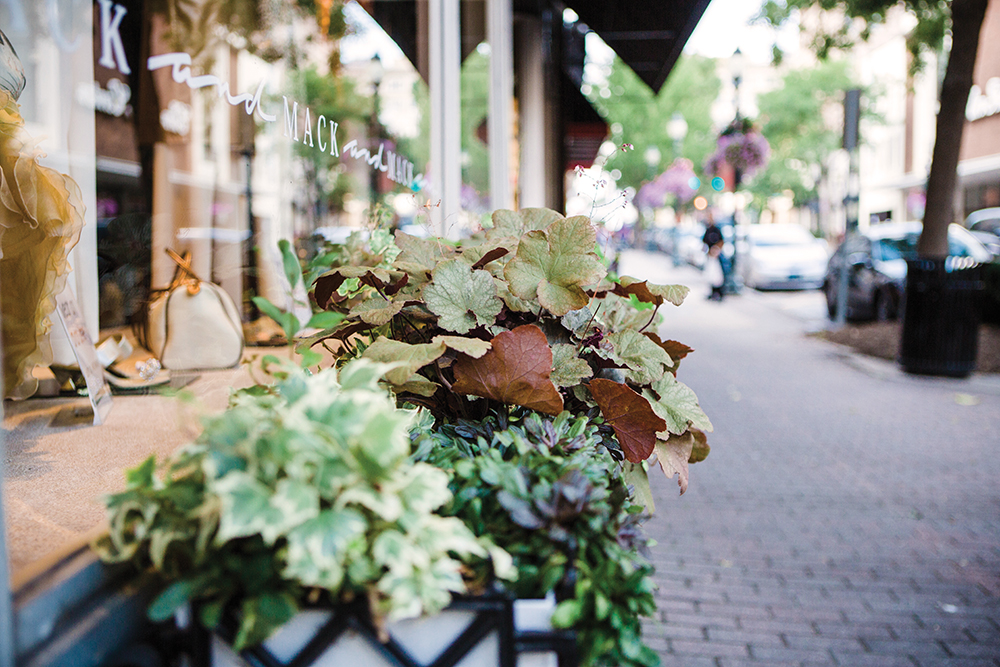 Even downtown, Greensboro’s curbs, sidewalks, and storefronts are lush and lively. photograph by Marissa Joy Kaplan

Like everything else in Greensboro, there’s something about the Curb Market not easily said. Those high ceilings. Those green-painted tables. It’s more intimate than an open-air affair. Everybody’s out walking the rows on a Saturday morning (or Wednesday, in season), getting closer to the earth, the ground, farther away from the crush and grind of the increasingly littered everyday. The Curb Market — this whole city, really — is a place that allows you to live slowly, even if just in short bursts.

• • •
Trains rolling through. Planes overhead. In open-windows weather, Greensboro reminds you that it’s a town of comings and goings. On that note, while we’re here: The majority of folks I’ve known who have moved away from Greensboro seem eventually to return. What is it? What pulls people back?

Like everything else in Greensboro, there’s something about the Curb Market not easily said. It’s a place that allows you to live slowly, even if just in short bursts.

Maybe it’s those two identical time-machine strip centers just north of town, where Battleground Avenue and Lawndale Drive seem to be attempting an eternal figure-eight. Maybe it’s downtown, so long in a state of hoped-for revitalization, and now actually in one. (Multiple breweries! First Friday! A genuine bookstore!) Maybe it’s the trails of Guilford Courthouse National Military Park, a place so dedicated to curb and street that it straddles both. But now I’m just naming landmarks in a city that doesn’t really have any. And that’s not what I mean to do.

Out at Guilford Courthouse, if you get just lost enough, you can find the gravel roadbed of the old, original New Garden Road. The Revolutionary War-era New Garden Road. On and around this ground, Nathanael Greene’s Carolina and Virginia militias held, for the most part, their ground against the better-equipped Redcoats, and from there on out, the war turned in favor of the Americans. Greensboro is named for Greene, even if, somewhere along the way, we lost that extra E. When I’m out that way, I seek out the roadbed, stand in the quiet, and think of the city blocks just a few miles back behind me, of this place I’ve come to call home. I’m not the only person in town — not by a long shot — raising lettuces by the curb, planting daffodils and irises, pulling weeds from the cracks in the sidewalk but leaving volunteer primrose. At my house, I’m also tending a dogwood named for the daughter of the family who first lived there. “Oh,” said my neighbor Ralph, coming over to greet me the first week we moved in. “That’s Miss Julia’s dogwood.” There it stands, right at the curb. There we stood, getting to know each other, where the yard meets the street: That’s where Greensboro lives.

From a patio perch

Just past the curb, you’ll find its sit-and-stay-awhile cousin, the patio, Greensboro’s favorite place to enjoy a meal. 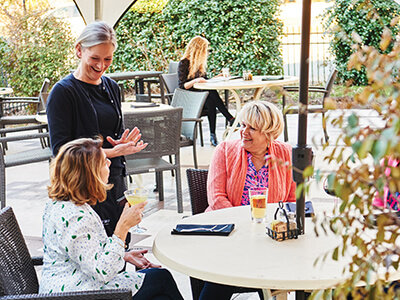 Southern Lights
This upscale bistro opened in 1985, and added outdoor dining when it relocated in 2010. Today, locals seek out Southern Lights’ patio for a cup of soup and a sandwich in the sunshine — shaded by umbrellas and surrounded by greenery. southernlightsbistro.com

Lindley Park Filling Station
One of several eateries with patios at Walker and Elam avenues (aka “The Corner”), the LPFS takes its neighborhood location seriously — its sandwiches bear the names of local streets and landmarks. lindleyfillingstation.com

Liberty Oak
When Liberty Oak, already a fixture of Greensboro for nearly 20 years, moved into the 1883 Vernon Building in 1999, it became one of the first anchors of the city’s revitalized downtown, and built a patio with a view of Washington Street. libertyoakrestaurant.com