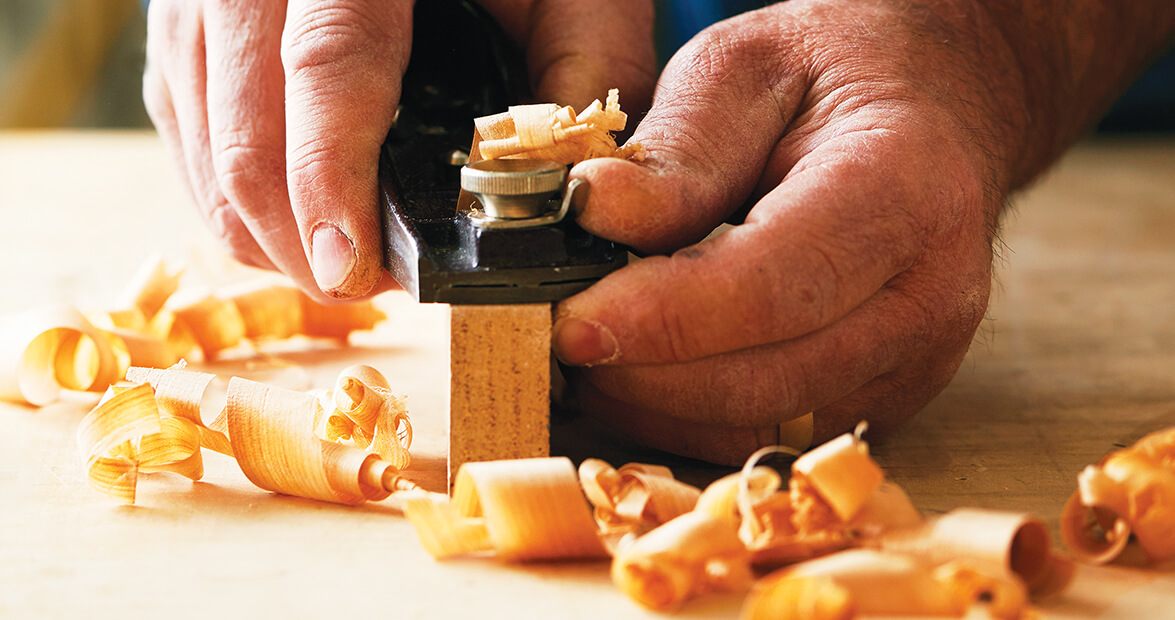 Hickory’s identity doesn’t announce itself. Spend some time there — peruse the shops on Union Square, walk the elegant, oak-lined avenues past impeccably restored Victorians in the Claremont neighborhood, encounter the old mill buildings converted into mixed-use complexes complete with brewpubs — and you still struggle to find its handle. There’s a lot here for a town of just more than 40,000. There’s a symphony, art and nature museums, a good park system — yet few outside Hickory seem to know about these things. Why is that? What’s the heart of this place? Where does it really live?

You have to pull Hickory open like a drawer to see what’s in there.

In an industrial corner of town, inside a humble brick box — a former television repair shop, up the street from a body shop and an industrial tape manufacturing plant — work custom-cabinet maker Luke Hargenrader and his brother, John. Luke staple-guns plywood cleats to the underside of a Shaker-style cabinet — a budget job, thus the staples and plywood. The concussion of the gun — shir-BAP, shir-BAP — echoes through the shop. John, wearing a surgical mask, applies a disc sander to the edges of a maple top for a kitchen island. As he works, a cloud of wood dust rises around him. 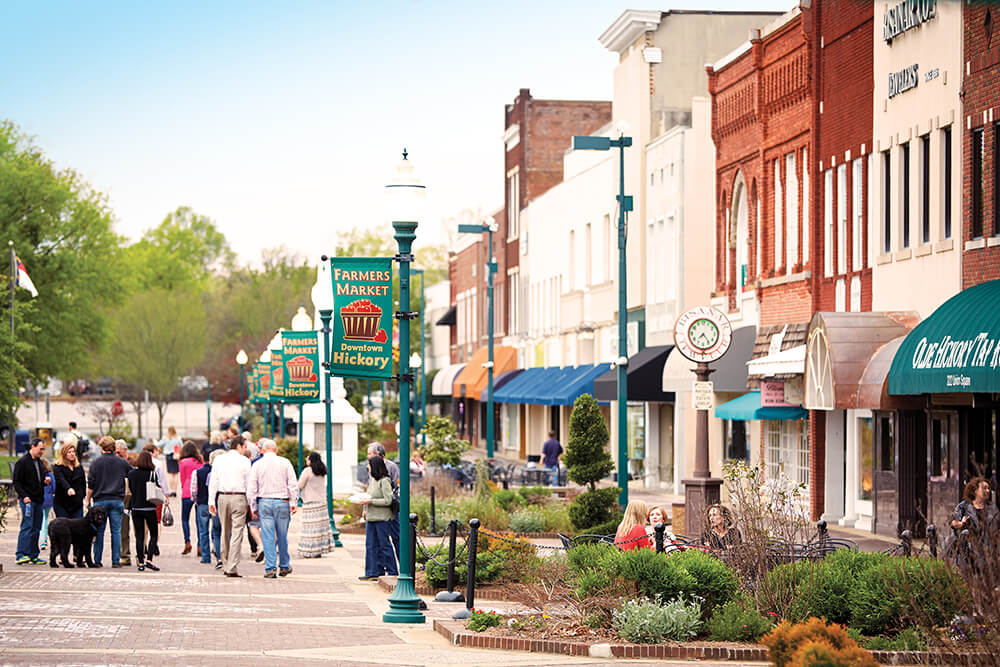 At one of his work tables, Luke extends his hands. His left is adorned with a gold wedding band and a callused and discolored thumb, and his right with a double-track scrape. There are nicks and scars on both. They’re a woodworker’s hands. “Yeah,” Luke says with a chuckle. “Still got all my fingers, though.” He raps his knuckles on the maple tabletop.

Hickory is a place, on the map and in its soul, where people make things out of wood. That doesn’t make it unique, as High Point and Burlington residents will surely tell you, but few places anywhere are built on working with wood for a living the way Hickory is. (A few years ago, the city adopted a new marketing slogan: “Life. Well Crafted.”)

Generations here have learned the trade from their forebears.

It’s become far harder lately. For nearly a century, the people of Hickory worked in factories, building ottomans and armoires and rockers from native Piedmont hardwoods. Then, over the course of a decade, thousands of those jobs went away. The empty and near-empty factories and shops squat, inert like cicada husks, off the highways in the parts of town where people tend not to go anymore. The decline left people doing what Luke Hargenrader’s trying to do in his modest brick bunker: pull together his livelihood from the available materials, and meticulously trim, carve, and shape it into something that looks nice and, above all, works.

Generations here have learned the trade from their forebears. The people who settled the Catawba Valley in the 18th century were austere German Lutherans from places like Pennsylvania, and they built their lives by applying tool to tree. One of the first buildings here was a log tavern erected next to the main east-west trading road. The town that sprang up around it was called Hickory Tavern until 1873. 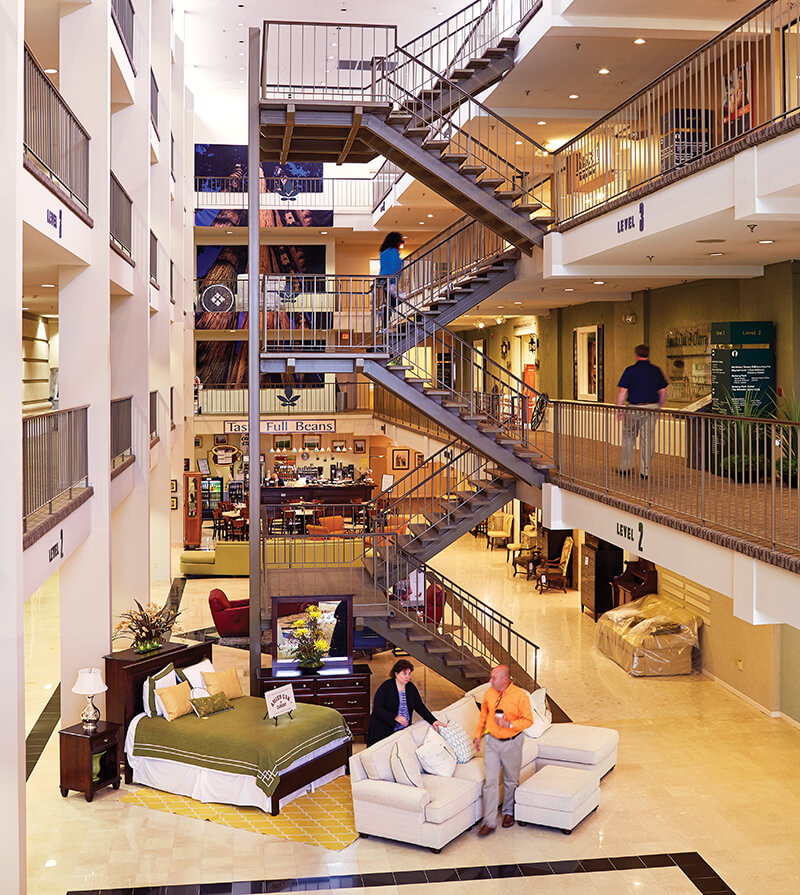 These days, life is crafted more at the individual and small-shop level than ever before. When the jobs left, workers had to find other ways to use their skills and make money, and plenty of them went the independent, custom-built route, on their own.

“There’s a resurgence. At some point, people realized that making something with your hands is important,” says Coleman Fourshee Sr., who’s spent the past 20 years managing Klingspor’s Woodworking Shop in Hickory. The business is the tools-and-implements division of the worldwide abrasives company. “You start small, and next thing you know, it’s a side business,” he says. “And it’s more important because America doesn’t make much anymore. Maybe it’s a social movement.”

Or maybe it’s subsistence, people doing what they can with what they have. Parked outside Watson’s Furniture House, in the southwestern part of Hickory, is an old yellow moving truck. “Refinish & Restore What You Can’t Buy Anymore: American Made,” says the lettering on the side, so eroded by time and circumstance it’s barely legible.

Against the walls of the shop, Luke and John have stacked sheets and boards of maple, walnut, and oak. Above those hangs a sign, its paint chipped and worn. “Custom Woodcraft,” it reads, blue block letters against a whitewashed board. A half-century ago, the sign hung on the street outside Luke and John’s father’s shop back in Pennsylvania.

These days, life is crafted more at the individual and small-shop level than ever before.

The Hargenrader family has been involved in woodworking in western Pennsylvania for four generations. But in 2000, Luke decided that his prospects would improve if he moved south. It was the worst possible time, when the furniture industry began to collapse and send its jobs to China. Until last year, Luke, married with five children, worked for assorted companies as a custom-cabinet maker. He’s practiced the craft since his teens. But then his last employer ditched its cabinet line, and Luke decided to strike out on his own. 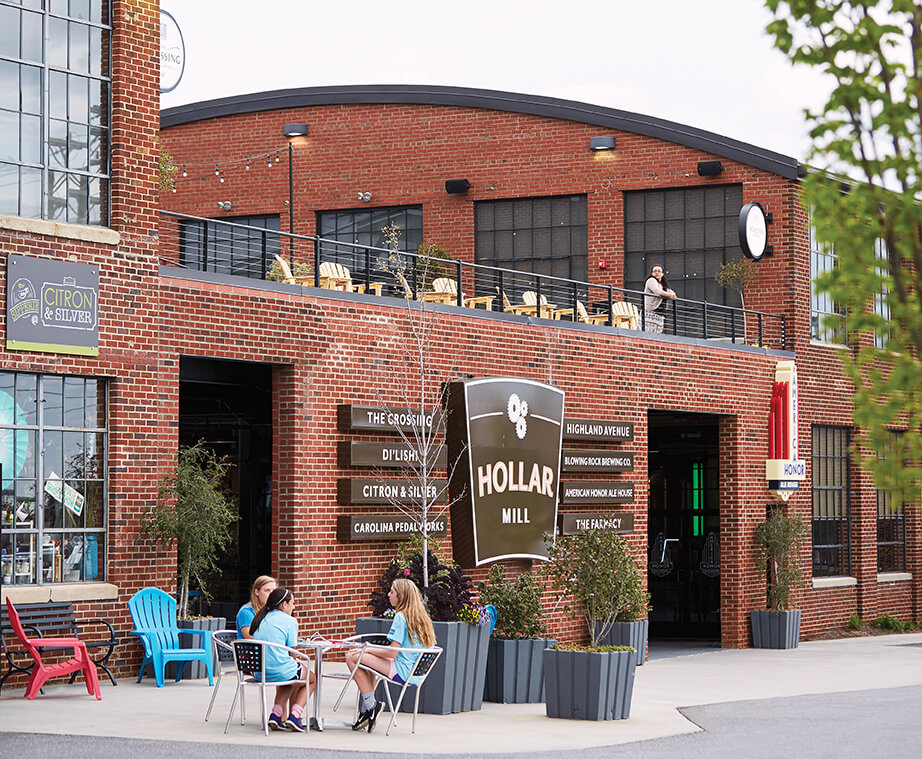 The 1930s-era Hollar Hosiery Mill went from vacant to vibrant when it reopened as a mixed-use facility in 2013. photograph by Stacey Van Berkel

Luke is 53. He figures he’ll work until he’s 70. “I would like to find a young guy who’s as passionate as I am about woodworking and say, ‘Hey, you interested in working for 10, 12 years?’ Not as a partner, but as an apprentice,” he says in his shop. “Pay him a living wage. And then say, ‘OK, here’s the business. It’s yours.’”

What he’s saying in one sense is that he doesn’t want to be the last Hargenrader after four generations to earn his living as a woodworker. In another, he’s laying a template for the place where he’s decided to live out his days. Wood can be hard. But it bends, submits to the right pressure, applied firmly and precisely. It can adapt to new circumstances, new functions. If you’re smart and put in the hours, you can build almost anything you want. “Woodworkers never go hungry,” John observes. “Once people know you’re a woodworker, they start asking, ‘Hey, can you do this for me …?’”

The brothers laugh. Then they get to work.

The “Miracle of Hickory”: In June 1944, citizens built a hospital in 54 hours to save their children from the worst polio outbreak in U.S. history.

Want to eat like a local? Here’s where to go for a Hickory breakfast, lunch, and dinner.

Windy City Grill
Many Hickory residents still call this popular breakfast spot Homer’s, after Homer Eckard, who owned the restaurant after World War II. Homer is gone now, but several decades and three locations later, the atmosphere at Windy City Grill is still as simple and cozy as it ever was, and the food as delicious. Try a breakfast sandwich: egg, cheese, and the meat of your choice — say, bacon or bologna — served in a wax paper wrapper. (828) 322-1131 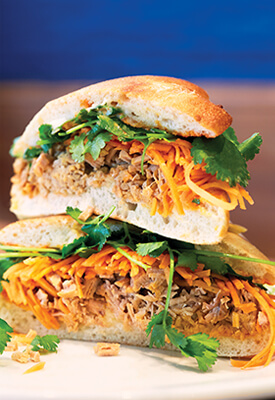 Hatch Sandwich Bar
Look for the downtown corner shop with the blue awning, with the concrete floors and butcher-block tables inside. This is Hatch Sandwich Bar, known among lunch crowds for sandwiches like pulled pork bánh mì, turkey-bacon-avocado, and, especially, pork belly BLT with miso mayo. For that last one, owners and chefs Colin Makin and Zach Harkis braise the belly overnight, then put it on a bolillo roll — crusty on the outside, soft in the middle. hatchsandwich.com

Fourk
There’s an obvious reason for the “u” in Fourk’s name — the restaurant is located on Fourth Street — and there’s a not-so-obvious reason: That “u” lets you know that everything at Fourk comes with a twist. The creatively spelled name. The curved bar serving fresh-fruit-infused cocktails. And Chef Joyce Boston’s dinner menu, full of twists on American cuisine, like ahi tuna with sesame soy-ginger glaze, served with wasabi velvet potatoes. fourkrestaurant.com

A guide to getting around Hickory, and a few things to look for along the way. 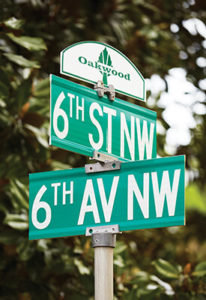 If you find yourself lost in Hickory, don’t feel bad. Here, the avenues are also drives, and the streets are also lanes and courts. The confusion started in 1930, with the merging of three cities — Hickory, West Hickory, and Highland — which resulted in dead ends, duplicate names, and discontinuous roads. In 1951, to lend some order and help folks navigate, Hickory was divided into quadrants, with Center Street as the north-south axis and Main Avenue as the east-west axis. From there, “streets” run north to south; “avenues” run east to west; and “drives,” “places,” and “courts” are anything too curvy to conform to the city grid. Our advice? Bring a GPS — or ask a local. 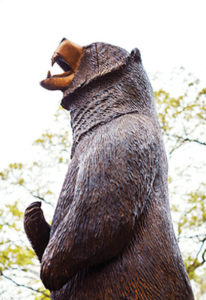 You’ll know you’ve arrived at Lenoir-Rhyne University when you see the campus guardian: a 15-foot-tall carved bear on 7th Avenue Northeast. L-R’s athletic teams have been “the Bears” since 1924, when a sportswriter described their baseball team “charging out of the dugout like mountain bears.” In 2014, the university hired professional tree carvers Joey Rowe and Jason Smathers to transform a dying Southern red oak into a physical representation of L-R’s mascot, and a symbol of its spirited student body. 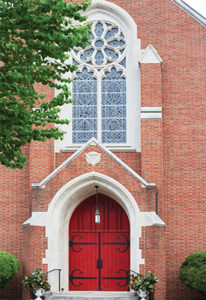 In the 1700s, German Lutherans, who’d come to America seeking freedom from religious persecution, arrived in the unsettled North Carolina backcountry by way of the Great Philadelphia Wagon Road. They brought with them a set of religious beliefs that spread like wildfire in Catawba County. It’s easy to see their influence in Hickory today: This 30-square-mile city is home to more than 20 Lutheran churches, including Holy Trinity on Sixth Street (left), as well as Lenoir-Rhyne, the state’s only Lutheran university.

To craft a city’s future, you have to understand its past and appreciate its possibilities. When Allison and Adrian Holtzman moved to Hickory in 2007, they found a community with a lot of potential — yet one that was still reeling from the loss of manufacturing in the area. The Holtzmans founded Friends of Hickory — a group of residents passionate about their city — to help Hickory find its new identity, and to expand on its best assets. Already, the Friends have worked with the city to develop a downtown park, with areas for learning and exploration, scheduled to open this year. Learn more at friendsofhickory.com.