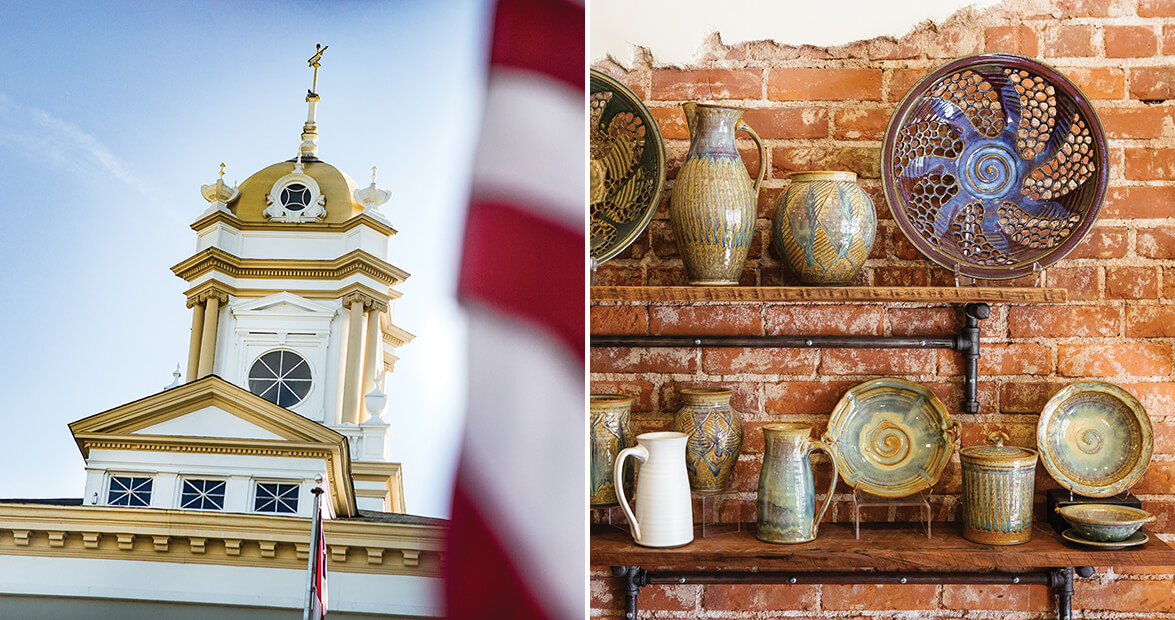 If I could sing a love song to Morganton, I’d take back my breath from that view of Table Rock that rises behind the first glimpse of town and use it in tribute to the granite cliff, freckled green with scrub trees against the signature blue of the ridge.

Table Rock is a sudden, stony plane, a high note in the soft peaks that hold hands to say grace around Linville Gorge. Table Rock is also a Morganton refrain, its shape and sensibilities playing out across the town below.

A song for Morganton would need the highs and lows of the familiar mountain profile, would need a bit of longing for the way the trail used to look, how the loose stones slid under our feet as we looked for alternate paths to the top.

I’d try to harmonize with the saws of woodworkers and furniture makers that marked a manufacturing heyday. And I’d hum along with knitting machines whose softer sounds took up the tune inside vast factories like the nearly 100-year-old Garrou-Morganton Full-Fashioned Hosiery Mills (turned Premier Hosiery Mills).

I’d close the first verse, time traveling in that singular way a hike from the mountain’s top allows, with a chorus of Morganton’s newest fans, the ones who moved in after the bankrupt mill became the city’s centerpiece project, a high-end residential and commercial space joined to City Hall by a brick courtyard. 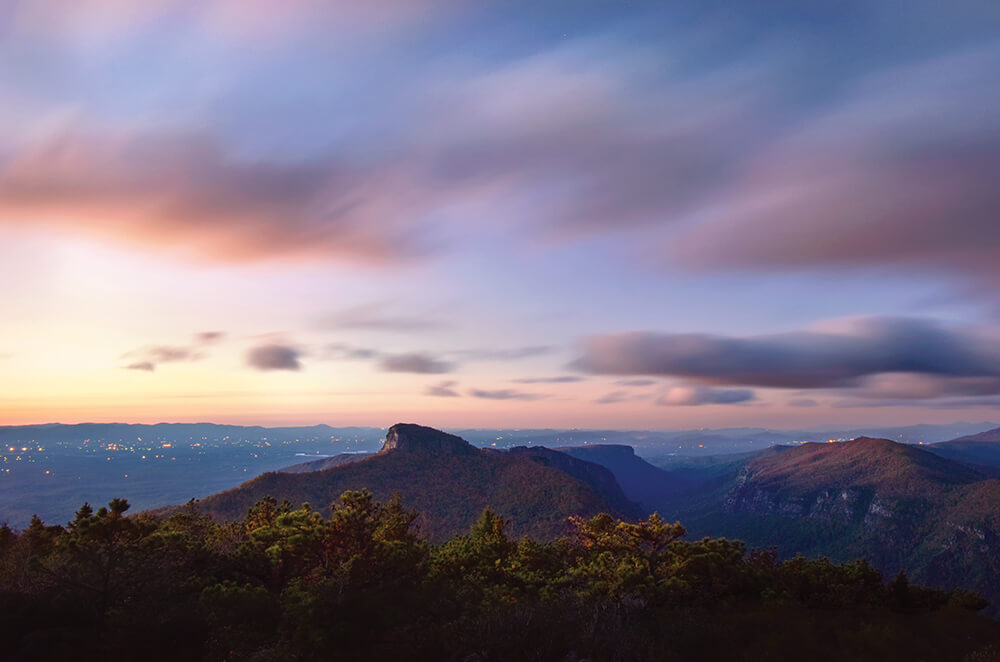 Somewhere in there, we’d need a note or two on how it feels to pay your water bill on history-scarred hardwoods, in shadows painted by restored beams behind wide industrial windows.

Morganton, with its two craft breweries in a town of some 16,700 residents, demands a drinking song, too.

Catawba Brewing Company, an established player in North Carolina’s mountain of craft beer triumphs, struck its first chord in the beer world from a dozen or so miles down the highway. It was a modest start, cofounder Scott Pyatt will tell you, in the basement of a closed knitting mill, no glass in the windows, ivy growing inside and out.

Selling the first kegs paid for ingredients to make the next run. You don’t grow up in the mountains without a wariness of bank loans.

Catawba now has two spots in the up-mountain beer mecca of Asheville and one on the way in Charlotte’s trendy Plaza Midwood neighborhood. But Pyatt and his cofounding brother, Billy, keep their main production in downtown Morganton, with the mountain in the company’s logo mirroring the one that overlooks its origins.

Table Rock is a Morganton refrain, its shape and sensibilities playing out across the town below.

A half-mile away, on a slice of downtown’s northwestern edge, Fonta Flora adds its small-batch creations to the mix. The product is a reflection of land and landscape, with farmstead ingredients you’d find on your grandma’s Sunday table. Locally grown beets, carrots, and sweet potatoes go into these beers. The kiwis for one popular concoction are grown farther up the mountain in Burnsville.

The brewmaster has his sights on pawpaws when the brewery expands into a renovated historic barn, doubles capacity, and begins farming eight acres on the site of the historic Old Whippoorwill Dairy Farm. It’s a spot closer to the one-time sharecropping village, now at the bottom of the lake, which lends Fonta Flora its melodic name.

An anthem to Morganton might best be sung from the lawn of the 180-year-old county courthouse, stucco over native stone beneath a gold-painted dome that rivals Table Rock for the grandest crest on the horizon.

It’s where the lights of a seven-screen downtown theater, built to share a corner with the 1930s-era Mimosa movie house, reflect onto a bronze statue of Senator Sam Ervin. The Morganton native and folk hero, who led 1973’s Watergate hearings with a Southerner’s intolerance for “executive poppycock,” would surely command a line in Morganton’s song.

And he probably wouldn’t mind sharing.

I’d want banjos, the kind you’ll occasionally hear at Friday-night concerts on this hilltop square in the summertime. The kind that a mountain picker can coax to crying in the way our fabled Frankie Silver (you’ll remember her ballad) must have heard in the hills of her youth, before the 18-year-old was convicted of killing her husband and chopping him into pieces with an ax. Before her July 1833 hanging on Morganton’s public square, her father is said to have silenced her last words with the poetic directive, “Die with it in ye, Frankie.”

For percussion, I’d want the clink of simple clay pottery shards, those made by the region’s earliest inhabitants on the banks of the Catawba River and its mountain tributaries. American Indians are still whispering to us from Morganton. Archaeologists have scraped the red clay from enough history to tell us the city’s outskirts could have been home to North America’s largest native town in the mid-16th century.

More recent findings suggest a greater significance — that the site likely housed the Spanish Fort San Juan, built in 1566. That would make it the oldest European settlement in the country’s interior, predating the Lost Colony by two decades and Jamestown by twice that many years.

After that, as with all good songs, a pattern emerges. 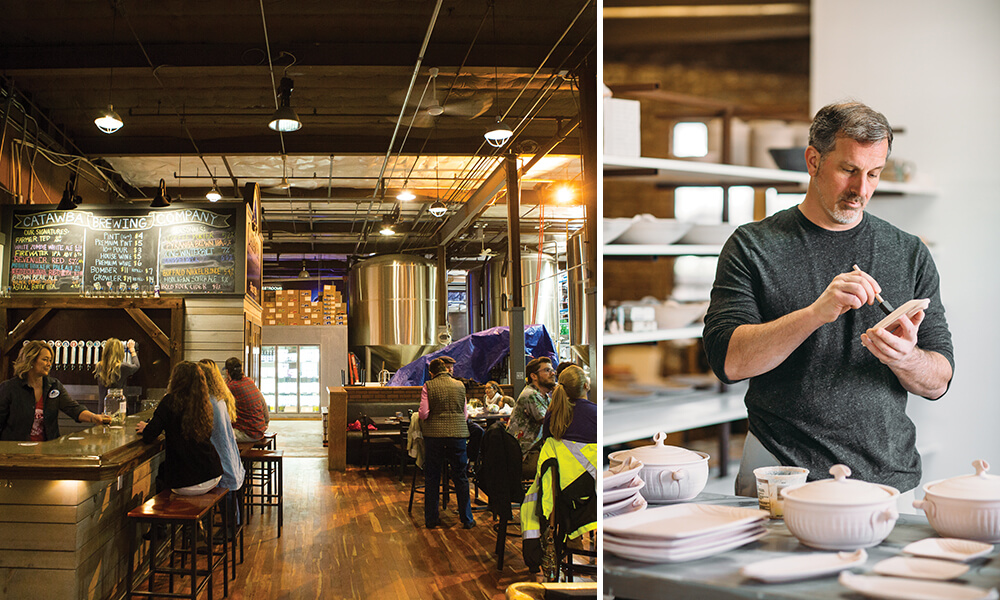 Makers of all stripes — from the brewers at Catawba Brewing Company (left) to potter Hamilton Williams (right) — find inspiration in the mountains around Morganton. photograph by Tim Robison

Hamilton Williams is a potter. His medium has evolved to include both the utilitarian pieces archaeologists dig sliver by sliver from the creekside at the foot of the Appalachians, and the works of art that sit on lighted shelves in showplace High Country homes.

Williams moved into his downtown Morganton space nearly two decades after he settled nearby in what he thought would be a temporary home. He always planned to keep going west, toward Asheville’s better-known arts district. But the downtown map he made a year ago is already in need of updating to mention the shopping and dining that’s risen up around him.

Over time, the idea of going somewhere else began to seem unnecessary. “From Morganton, you can be on the interstate in five minutes. You can be on top of Table Rock in 40 minutes, and that includes hiking time,” he says.

He’s a man whose work and whose inspiration come from the earth beneath his hiking boots. A man who, all these years later, still finds himself remarking on the sunrise over Table Rock as he makes his morning commute each day.

On one of those mornings, he realized he was home — and that he wasn’t settling.

If I could sing a love song to Morganton, I’d have a hard time outdoing that one.