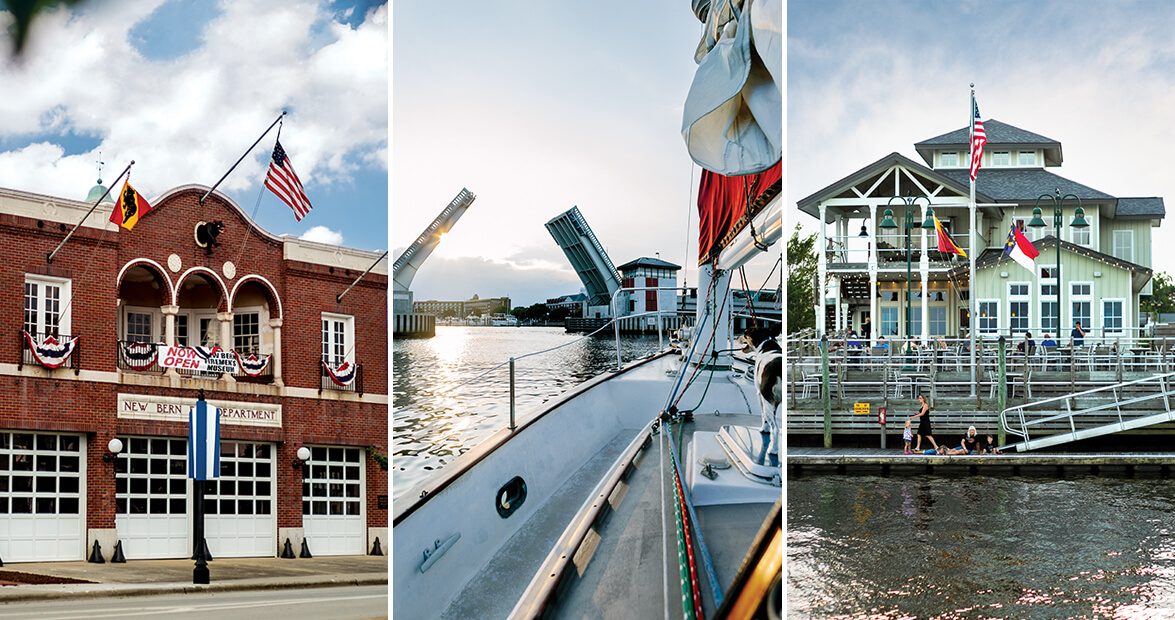 Sitting in traffic on one curving concrete tentacle of The Octopus — the sweeping, swooping set of bridges and ramps that carry drivers up and over the Trent and Neuse rivers, and into, out of, or past New Bern — it occurs to me that I’ve been thinking about bridges all wrong. I’ve forgotten about the metaphysics of bridges.

I know, I know. I’m wading into abstract territory. Maybe it was the back-to-back podcasts about quantum mechanics (bear with me). But at that moment, watching a pair of boats make their way through the open drawbridge, wishing I could frame the arc of the bridge’s bright concrete just right for a photo without getting out of my car, I realized that bridges are more than just physical constructs. They’re anchors in space and time. Or maybe they’re more like a stitch, a thread tying one landscape to another, drawing them closer, somehow, and doing the same through time. 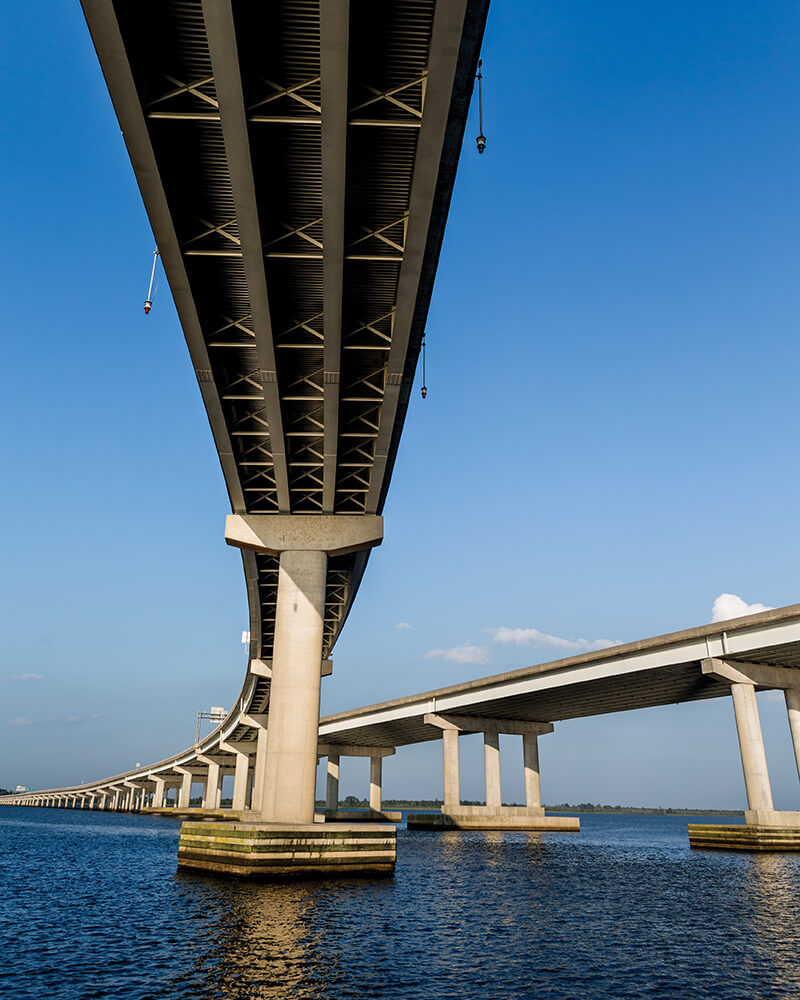 Since 1999, the Neuse River Bridge has carried drivers up and over the Trent and Neuse rivers. photograph by Charles Harris

New Bern exists in a duality. The town is here, in the present, the now, but the fabric is sheer in places, and the past shows through. Where the bridges physically stitch place to place, the past and present connect through more subtle threads.

This twining together of past and present is what I’m thinking about when I pull onto Pollock Street and park in front of Harmony House Inn, which dates back to 1853. It’s seen war, occupation by Union forces; it was sawn in half, moved nine feet, and reconnected; it’s withstood hurricanes and seen countless owners, and was finally converted to a bed and breakfast. Today, it’s in the hands of Gretchen and Tracy Du Peza, who are renovating and ushering the home into a new phase of its life.

Harmony House isn’t singular in the story of its rebirth — far from it. On this block of Pollock Street, it seems every other house has a historic plaque, and around town, the past and present converge in four historic districts where hundreds of homes were built, reborn, and reborn again as successive owners found new life in each.

New Bern exists in the present, but the fabric is sheer in places, and the past shows through.

Would you expect anything less from a town with “New” in its name? The original settlers — Swiss immigrants and German Palatine refugees — named the town New Bern in honor of their leader’s ancestral home in Switzerland. Just a few years after its founding in 1710, the budding settlement barely escaped destruction in the Tuscarora War and began its own story of rebirth. By 1747, the town had grown in population and stature and was named the capital of the colony. When Gov. William Tryon took his seat at the head of the colony, construction began on the mansion known as Tryon Palace.

Tryon Palace was reborn, both physically and metaphysically — though, standing in front of it, nothing pulls back the fabric of time to let me peek into the past. The lone original structure is practically indistinguishable from the rebuilt portions. Governor Tryon only ruled from here for a little more than a year before Gov. Josiah Martin took his place. Martin wisely fled at the start of the Revolution, and patriots soon seized the palace and named it their seat of power. When North Carolina became a state, the first few sessions of the general assembly were held here. Then the capital moved to the new city of Raleigh, and the palace was reborn, repurposed, and used for all sorts of things, until 1798, when a fire started in the cellar and burned the central building. The kitchen and stable offices were saved, but the kitchen was razed, and only the stable offices survived, intact but destined for a cycle of rebirth and renewal. 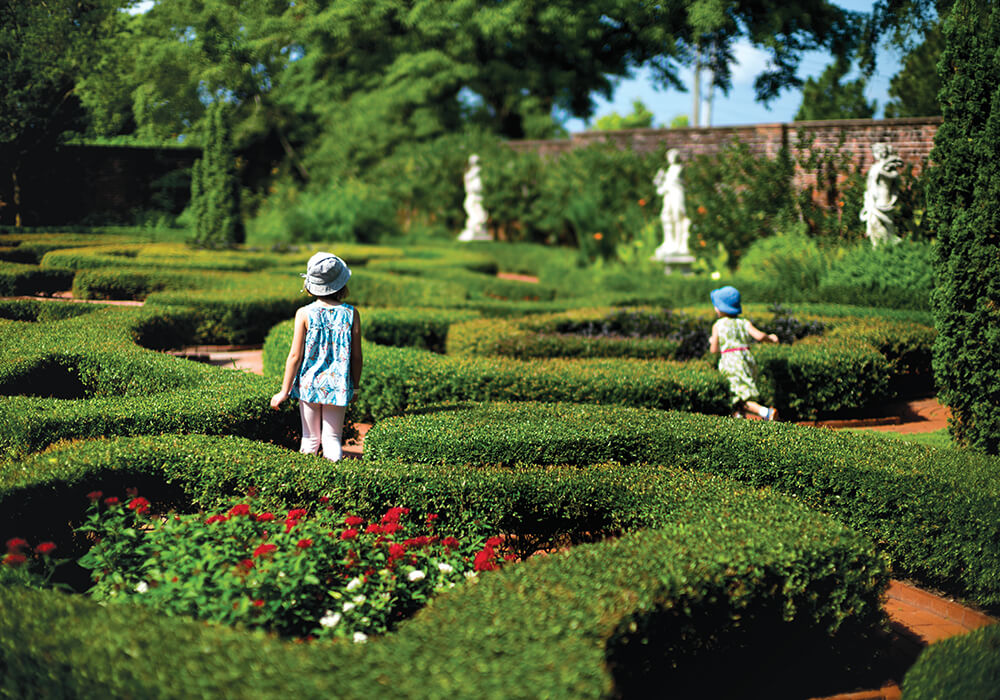 The Latham Garden at Tryon Palace was named for Maude Moore Latham, who dedicated herself to the mansion’s restoration. photograph by Charles Harris

From the rubble of the palace, a neighborhood grew. Streets emerged, a bridge crossed over the Trent River, and the stable offices became apartments. The desire to bridge past and present was strong in several community members, and their work led to a monumental project: moving residents, razing a neighborhood, and rebuilding Tryon Palace on the foundation of its former self.

Every building in New Bern, it seems, used to be something else.

Over breakfast at Harmony House, I talk history with the Du Pezas, our conversation jumping from the palace to the town to their home. Gretchen excuses herself and returns to the table carrying a bottle labeled “Burnett’s Cocoaine” and a tarnished silver-plated fork.

“We found these when we took down a wall,” she says, handing over the medicine bottle and fork. The bottle’s heavy for its size; the fork, light.

“That bottle,” Tracy says, “we think belonged to one of the Union soldiers occupying the house. Burnett’s Cocoaine was a hair tonic from Massachusetts, and Company K, 45th Regiment out of Massachusetts held the home for a while.”

“And if you look at the fork — it’s tarnished, so it’s hard to see — but if you look close, you can see the initials ‘BEE’ on it. That’s Benjamin and Eliza Ellis, the builders of the house,” Gretchen says.

We set their finds on the table and carry on talking. As if the bottle and fork aren’t enough of a bridge into the past of the home and the town, I learn that the Du Pezas moved to New Bern after living in Europe for 15 years. Where did they live? Switzerland and Germany. 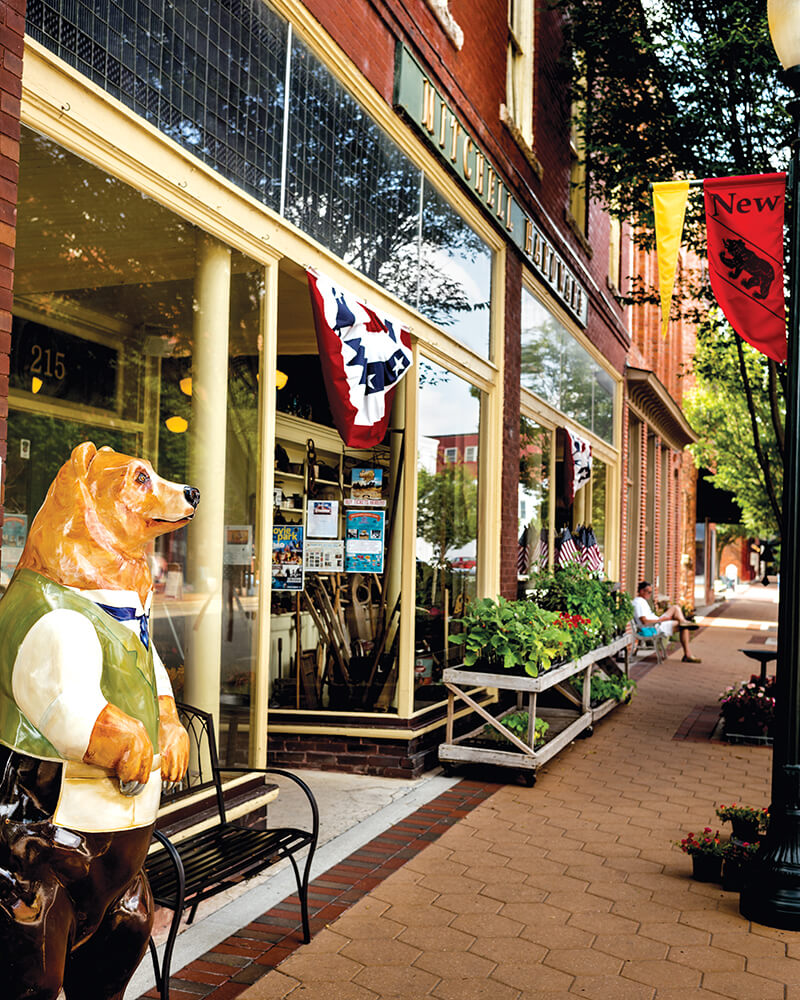 The fiberglass bear outside Mitchell Hardware is one of many around this city, whose name — Bern — means “bear” in Old German. photograph by Charles Harris

That night, walking to dinner, I don’t listen to any podcasts about quantum mechanics. I just listen to the town, take it in. I pass Fine Art at Baxters Gallery, once a jewelry shop, now an art gallery. I pass the spot where Caleb Bradham invented his new dyspeptic soda, called “Brad’s Drink,” in 1893, and changed the name to Pepsi-Cola in 1898. I pass a graveyard with headstones I can’t read. I pass the C. Foy Tonsorial Parlor, a throwback barbershop if ever there was one. Another half-block and I’m at The Chelsea, just in time for my reservation.

The Chelsea, like every building in New Bern, it seems, used to be something else. The high tin ceiling, aged brick walls, and tall storefront windows tell me the dining room was a shop of sorts. When I see the bar, over which hangs a trio of antique Pepsi light shades, I ask my server about the place. The front was a drugstore (a second shop of a certain druggist, Mr. Bradham); the rear was a fire station. After the abbreviated history lesson, he passes me a menu and asks if I’d like to hear the specials. I do, feeling the past creep into my present as he begins to speak.

“Chef Hoveland has been working with a native New Bern ingredient lately — Pepsi — and tonight we have Caleb Bradham’s Old Fashioned on our cocktail menu, short ribs braised in a Pepsi barbecue sauce as an entrée, and for dessert, Pepsi ice cream. And so you know, the staff, we can’t get enough of the ice cream.”

I hand him the menu; somehow, my dinner decision’s already been made.

Wander the streets along the Neuse River, and get a taste of eastern North Carolina.

247 Craven
With their ever-changing gourmet menu, the chefs at 247 Craven keep things fresh and seasonal. Ask for the Chef’s Tasting to get five unique and savory dishes.

Prohibition Drinks & Desserts
Stop by this 1920s-themed cocktail lounge early in the evening to cozy up on the couch with a gin rickey. Or order a slice of cheesecake to sweeten your night.

The Chelsea
Pepsi paraphernalia will tip you off that this storefront once belonged to the soft drink’s inventor, Caleb Bradham. But The Chelsea boasts a second, less obvious, claim to fame: In the 1950s, Elvis ate lunch at the drugstore that was located here.

Persimmons Waterfront Restaurant
Known for its fresh seafood and gorgeous view of the Neuse River, Persimmons offers an unforgettable dining experience. Try the shrimp and grits at dinnertime, when you can listen to a live band and watch evening descend on the water.

Catch a glimpse of days past when you visit New Bern’s historical sites and museums.

North Carolina History Center
Experience life in a North Carolina river village during the 1830s, and explore the state’s rich history, from interactions between Native Americans and early European settlers to popular songs of the 19th century. Enjoy a variety of interactive exhibitions and performances.

New Bern Battlefield Park
Walk in the footsteps of Union and Confederate soldiers, passing by trenches that appear just as they were 150 years ago. This exhibit is a dream for Civil War buffs, but will also delight anyone who enjoys learning a bit of history or strolling along forest trails.

A Harbor for Freemen

In the 1700s, New Bern was renowned for its free black community, thriving against all odds in a Southern town. By 1860, free blacks made up 13 percent of New Bern’s population — the greatest number found anywhere in North Carolina at the time. Those born free worked alongside former slaves as seamen, stevedores, peddlers, and craftsmen, building many of the stately homes and public buildings that still stand today. They built another legacy, too: Though less tangible, their political, economic, and cultural influences on the city are every bit as lasting. To learn more, pick up a map of New Bern’s self-guided African-American Walking Tour at the New Bern-Craven County Convention & Visitors Center on Front Street.