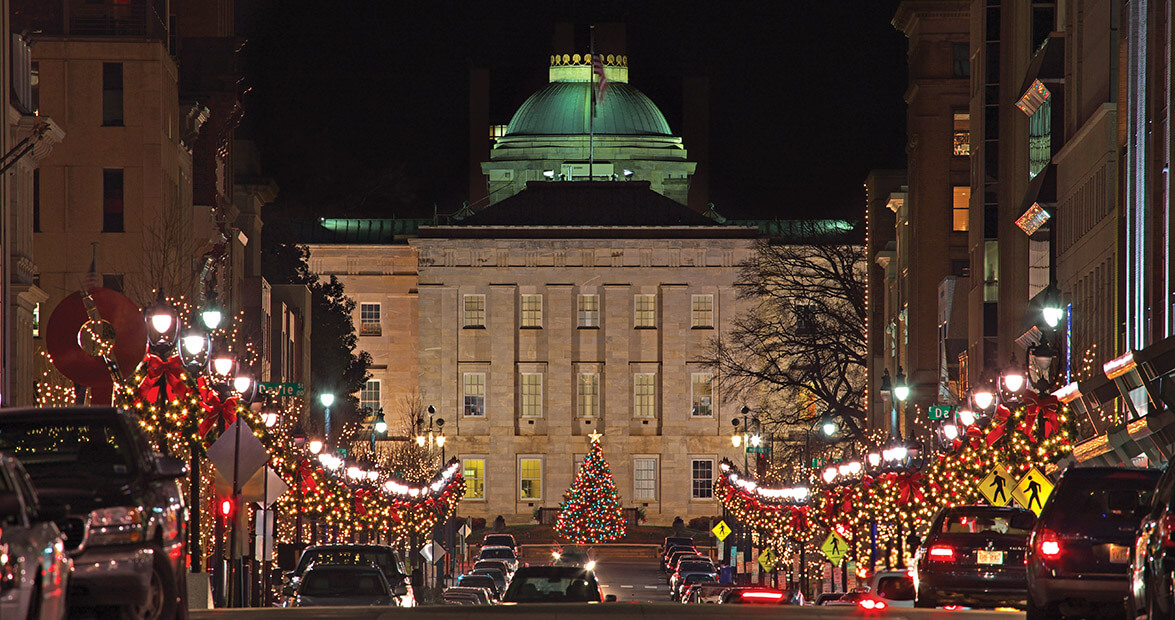 On First Night Raleigh some years ago, we escaped the early New Year’s Eve revelry by strolling our howling 2-year-old up the grassy hill over the State Capitol grounds. We tried to toss the remains of his dinner, uneaten for hours; no dice. “I want my icy hot dog!” he wailed. Fine then, kid, eat it, but let’s at least get rid of this awful crumbly bun. “I want my crumbly bun!” He ate them both between shrieks in the cold December night, as we escaped the crowds teeming on Fayetteville Street.

I’ll give you a moment to digest that phrase: the crowds teeming on Fayetteville Street. Fayetteville Street was for decades the no-traffic zone whose empty cobblestone pedestrian mall and lonely iron benches, running between faceless office towers and parking decks, told the story of Raleigh’s lost, purposeless downtown.

But Fayetteville Street, running south and away from the gray Doric Capitol that sits on a rise at the center of Raleigh, has more stories to tell than how a poor but hopeful decision to turn it into a pedestrian mall in the late 1970s finished what was left of Raleigh’s downtown. In fact, the story of Raleigh flows down Fayetteville Street — and all of Raleigh’s streets.

Raleigh is a street-level city. Its charms are its trees — downtown oaks that stretch across wide avenues to clasp hands with their across-the-street neighbors — and its two- and three-story brick warehouses, which are slowly finding new uses. Raleigh lives on your scale, passes time at your pace. 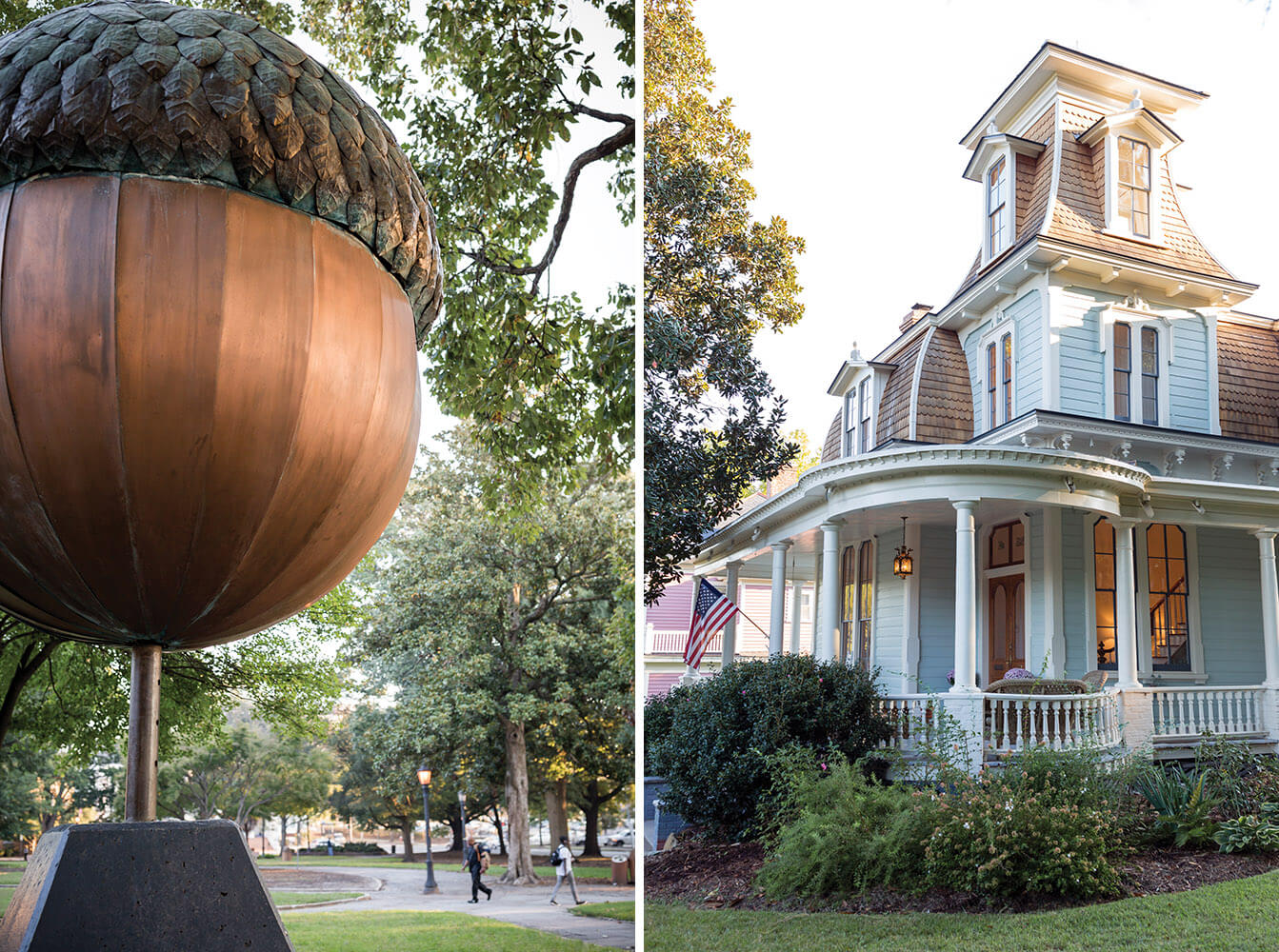 Raleigh was streets on a piece of paper before it was anything else — and its future was obvious even then. The earliest plan for the city — the William Christmas design from 1792 — has the statehouse where it remains today: in the middle of the road. The old city is a grid of streets crossing at right angles, with five parks arranged like the five-spot on a die, like Philadelphia, or Savannah. (Two of those parks have been absorbed by state government, though one does hold the lovely governor’s mansion.) At the center of the city’s main intersection, where Hillsborough and Fayetteville streets end, is Union Square, with the beautiful gray Greek temple of the Capitol building at its center, right in the middle of the street, clogging up traffic. Raleigh, that is, has Sleepy Southern Capital Where Nothing Much Gets Done in its DNA.

That grid of streets tells the story of not just Raleigh, but of North Carolina at the moment of the nation’s founding. Eight of the streets bear the names of the state’s eight judicial districts: Fayetteville, Morgan, Hillsborough, Edenton, Halifax, New Bern, Salisbury, and Wilmington. Others bear the names — Person, Jones, McDowell, Dawson, Blount — of the commissioners who chose the spot for the city. Surrounding them all are streets with the simplest of names: North, South, East, and West — the boundaries of that first city.

And it’s on the street, not in one of the new skyscrapers, museums, or apartment buildings, that you find Raleigh’s heart. Turn off Fayetteville onto Martin, and sit down in The Mecca Restaurant, founded in 1930. With its hexagonal tile floor, long, varnished bar, and cramped maze of upstairs rooms, you feel you might be sitting not only in a booth from the Hoover administration, but next to one of the very legislators from that era, still doing business from that dim booth. Or walk to Nash Square, and you’ll sit beneath an oak whose roots wrestle the concrete to a draw, and whose branches have probably been spreading since Joel Lane served Cherry Bounce and sold his property to hungover commissioners the next morning to create the city in the first place. Just east of East Street is Raleigh’s first cemetery, two-century-old stone sepulchres crumbling beyond the obligatory cast-iron rail fence; just west of West Street is the Boylan Avenue bridge, the best place to see the skyline, across a railyard that’s been around for more than a century. (You can get a beer from the Boylan Bridge Brewpub now.) You’re absorbing Raleigh’s history and you still haven’t had to crane your neck. You’re on the streets.

For its first hundred years, Raleigh just kind of was. Legislators came around once in a while, but otherwise, planted by legislative compromise where even the Tuscarora didn’t have a settlement, Raleigh had nothing else to offer. Union soldiers didn’t bother to burn it. Funny thing, though: Just leaving a place alone can turn out to be a good thing.

Raleigh started growing a bit in the late 19th and early 20th centuries, so it began adding streets. The timing was good, because that was the first era of American progressive city planning. So the close-in, quasi-suburban additions were parklike — gently curving streets connected to that rectilinear grid, with tiny creekside parks included in the mix. Along some new streets, trolleys ran, though they’ve been gone long enough now that the resulting median strips — of Glenwood Avenue, for example — tower with yet more oaks. Cobblestone alleys between neighborhood blocks feel like people’s backyards, but they’re actually public streets — relics of the days when servants and people of color could not possibly enter the front doors. They’re places where you can still walk freely.

As the decades idly passed, Raleigh occasionally spread another bit — several neighborhoods, for example, were built around those trolleys, and filled with tidy bungalow wood and stately colonial brick. As midcentury came, Raleigh developed a few ugly highways, and its downtown struggled, but it had fewer than 100,000 residents as recently as 1960. When wrongheaded urban renewal projects destroyed downtowns nationwide, Raleigh dodged a bullet because it simply didn’t have enough urban to renew. That is, every neighborhood Raleigh added remains where it was — and largely as it was. The prim Queen Anne homes overlooking downtown from the curving streets of Boylan Heights still surround the antebellum brick Montfort Hall; Cowper Drive in the leafy Hayes Barton neighborhood still bristles with enormous period-revival manses from the ’20s. Oakwood’s Victorian painted ladies still delight the eye on Person and Bloodworth streets.

Neighborhoods rise and descend in attractiveness, of course, but even the flight to the suburbs didn’t much harm Raleigh because, Raleigh being so small, they were so close — and closer-in Old Raleigh residents were loath to leave their stately homes to the Yankees pouring in. So though neighborhoods struggled, none died, and all have since profited from the growth of a downtown that now mixes skyscrapers with its old brick restaurants and businesses. To be sure, there’s plenty of sprawly, tree-deprived, clear-cut ticky-tacky as you get far from downtown, but if you stay close, Raleigh remains the “park with a city in it,” as one urban planning document called it, that it’s been since the first Raleighites carved it out of the park primeval in 1792.

What does Raleigh have? It has, simply, blind endurance. It has history by virtue of doing nothing more than lasting. Raleigh has adopted the most traditional Southern strategy: I will stubbornly, simply remain here.

And that turned out to be what saved it. From the brick sidewalks and granite curbs on Person Street to the Pigeon House Branch creek running down the median between streets in Hayes Barton, an awful lot of Raleigh is how it is because people have just never bothered to make it any different. A state government (mostly) looking the other way, and locals letting a small town stay small, kept a sleepy Southern town from turning into anything else. And the fact that warehouses and manufacturing spaces sat idle for years, simply because nobody had the energy to demand any different, means that Raleigh has the empty space to support its sudden growth now. But above all, it means that that growth mostly follows the same street-level scale. Raleigh is still a place that feels like it was built for people. When they completed the Briggs building in 1874 and called it Raleigh’s first skyscraper, you could yell up from the street, and someone on the top could hear you. Most of what’s lovely about Raleigh still happens at that scale.