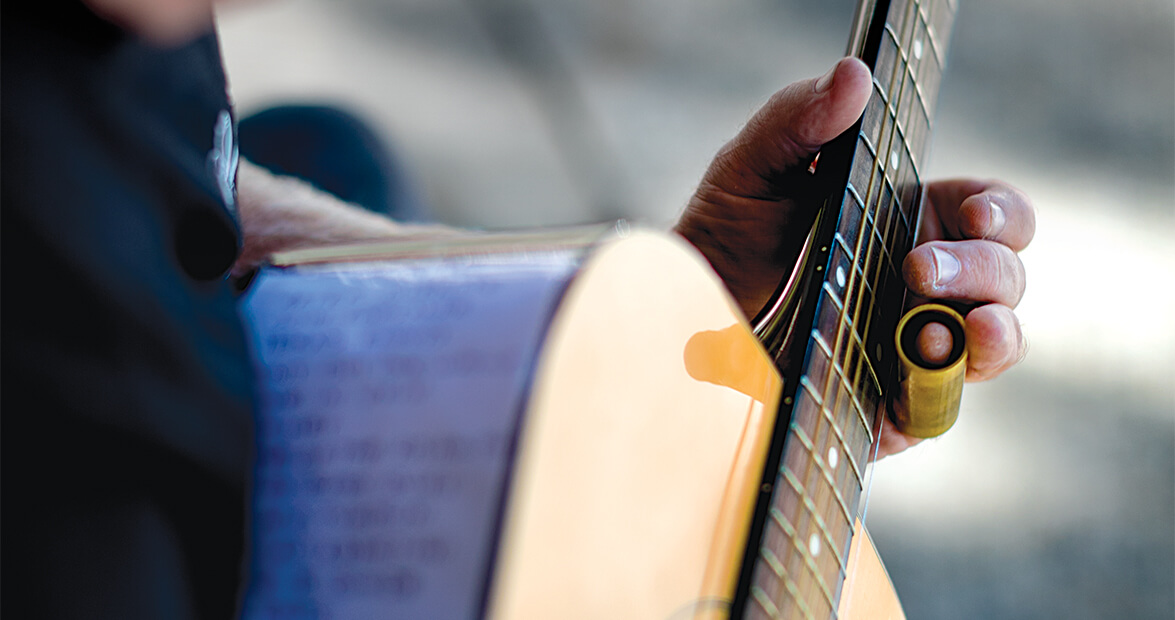 On the sidewalk outside the Shelby Café, where the lunch customers fill up on livermush, chicken tenders, and home fries, a retired engineer named Sam Havens strums his guitar. Dressed in a black T-shirt and blue jeans, he sings a bluesy number, a Folgers coffee container at his feet to collect tips.

“I do this when I need a little extra spending cash,” he says with a laugh.

The sound of his acoustic guitar drifts like a breeze beneath the colonnade of oaks along South Lafayette Street, past the white tablecloths of the Ni Fen Bistro, past boutiques, across the street to the outdoor tables of Joe’s Place, where silverware clinks on plates filled with American, Italian, and Thai cuisine. 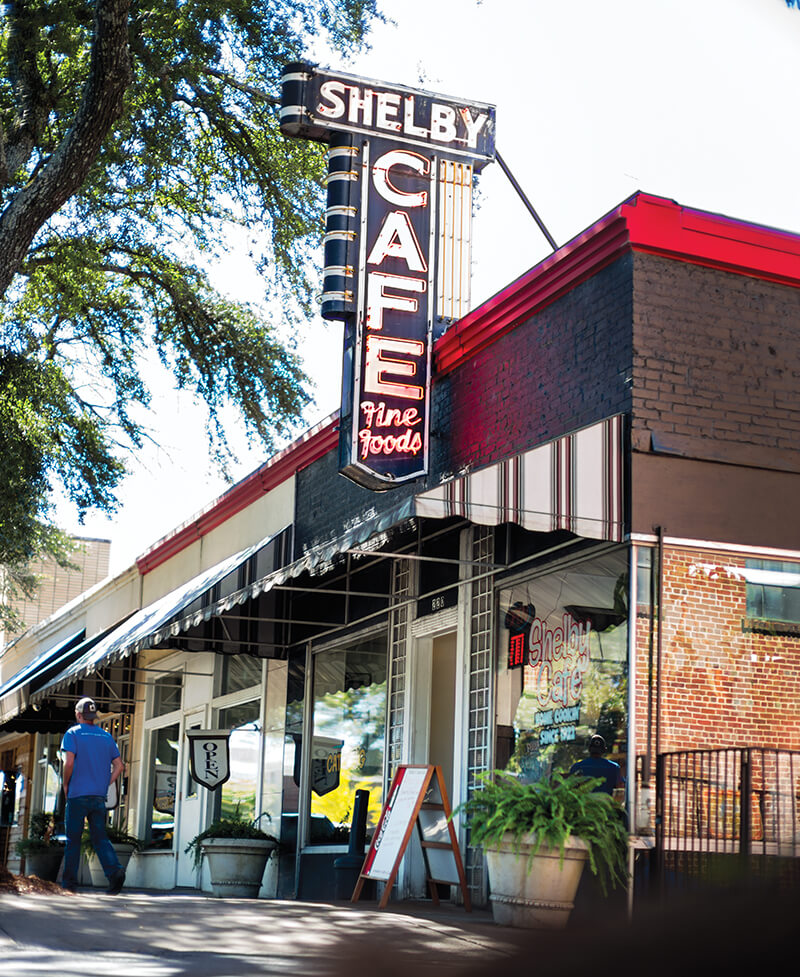 The Shelby Café has been a gathering place — and a purveyor of livermush, a local favorite — since 1922. photograph by Charles Harris

If string music doesn’t take center stage in the narrative of Shelby and Cleveland County, it’s at least in the background, providing the soundtrack, much like this lone strummer’s Fender six-string at lunch hour. Maybe it’s the red clay hills and kudzu thickets — or all the colorful, oversize Don Gibson records posted along the streets — but Shelby puts you in the mood to stop what you’re doing and listen to some good picking.

Two giants in bluegrass and country music hailed from Cleveland County: singer-songwriter Don Gibson, and banjo genius Earl Scruggs. Over the past decade, Shelby has created shrines to both, turning a 1939 cinema into the Don Gibson Theatre and the old 1907 Cleveland County Courthouse into the Earl Scruggs Center. Both projects began with a wake-up call.

For years, the old courthouse had housed a history museum; after the museum closed in 2004, the building languished for two years, its artifacts collecting dust and cobwebs. 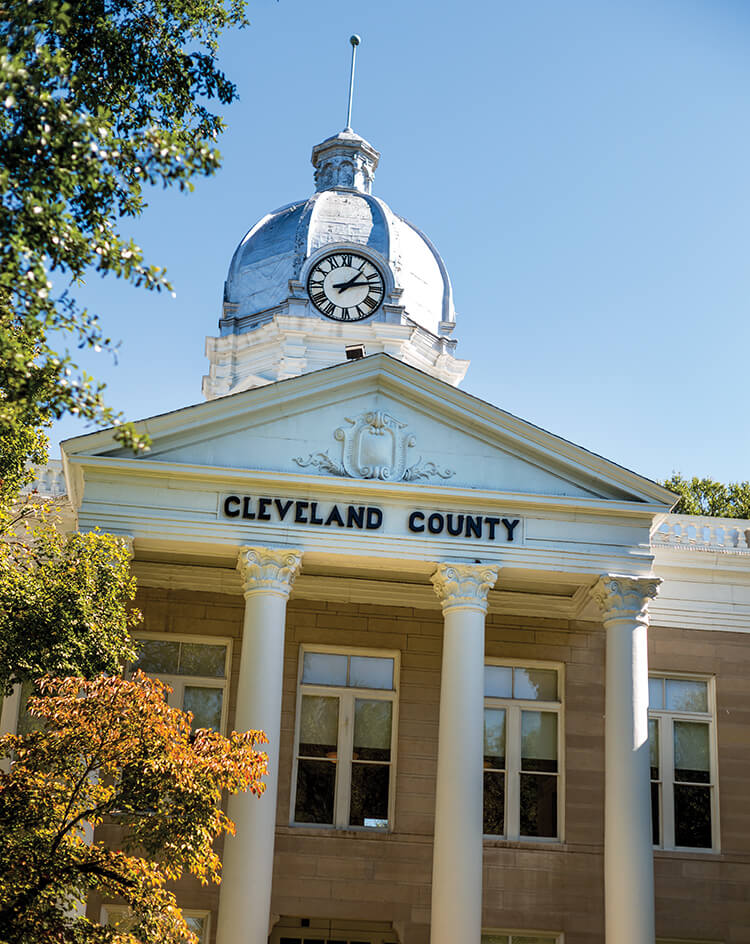 The sound of gavels has been replaced by the sound of bluegrass at this old courthouse, now the Earl Scruggs Center. photograph by Charles Harris

That’s when the Cleveland County manager formed a task force of volunteers to figure out what to do with the contents of the shuttered museum, and what to do about the sorry state of the courthouse itself. A consultant from North Carolina State University came to Shelby, looked around town, and gave the task force a dire prediction. “If you don’t do something,” Emily Epley, the executive director of the Earl Scruggs Center, remembers hearing, “you’re going to see tumbleweeds blowing down the street.”

That jolted a few volunteers into forming a nonprofit called Destination Cleveland County. With the goal of making Shelby a town that would draw people to the area, the nonprofit focused on the music, and the names Scruggs and Gibson.

Destination Cleveland County began raising capital to restore an Art Deco movie theater on South Washington Street into the Don Gibson Theatre. Gibson was born in 1928 and lived a few blocks from the old cinema, no doubt going to see movies there as a kid. A second-grade dropout from a poor family, he went on to write such classics as “Oh Lonesome Me,” “Sweet Dreams” (a major hit for Patsy Cline), and, probably most famous of all, “I Can’t Stop Loving You,” recorded by 700 artists but immortalized by Ray Charles.

“You can’t hardly bump into somebody in town that doesn’t play in a band or sings.”

Gibson was inducted into the Country Music Hall of Fame and endeared himself to country crooners and rock-and-rollers alike. In November 2009, six years to the month after he died, the Don Gibson Theatre opened as an intimate 400-seat concert venue. Executive Director Stan Lowery says the theater attracts about 30 national acts a year. “We do some jazz, we do some bluegrass, we do a little bit of everything,” he says. Vince Gill, Marty Stuart, Ricky Skaggs, the Bellamy Brothers, David Allan Coe, John Oates (of Hall & Oates fame), and even soft-rocker Richard Marx have all put on shows here.

Let Lowery show you around the place, and he’ll lead you to a hallway just off stage right, where the walls are covered with signatures of the famous performers who have set foot in the Don Gibson Theatre. Whitney Houston spoke at the theater just months before her death. There’s the signature of Tyler Perry, and of Lisa Marie Presley, too.

Lowery, with his goatee and below-the-earlobe sideburns, looks every bit the part of a music maker himself. “I got every instrument you can think of,” he says, “but I can’t play a-one of them.” Nevertheless, having lived in Shelby since he was 5 years old, he fits the mold of a music lover. “Music is a big heritage in Cleveland County,” he says. “You can’t hardly bump into somebody in town that doesn’t play in a band or sings.”

With its first project complete, Destination Cleveland County set its sights on transforming the old courthouse into a proper memorial to the life of its other hometown virtuoso: Earl Scruggs. 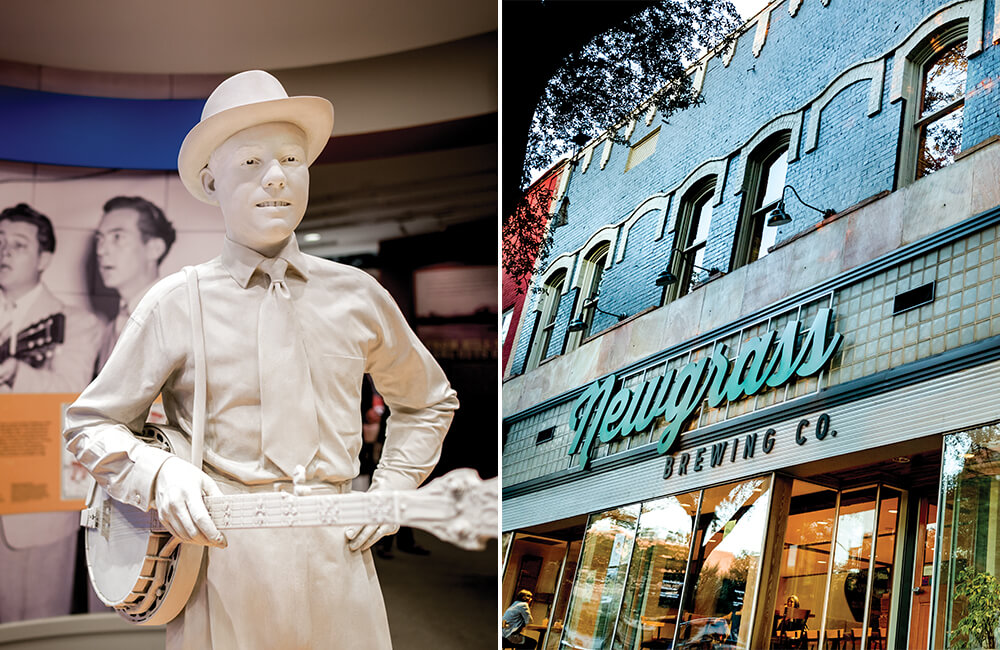 Earl Scruggs’s legacy is preserved both by a statue at the Earl Scruggs Center, and at the local brewpub, aptly named Newgrass. photograph by Charles Harris

As a kid, Scruggs mastered the three-finger picking style, now known as the “Scruggs style,” that’s the universal gold standard of banjo music. This technique allowed him to play the strings lightning-fast, propelling the banjo from accompaniment to lead instrument. His talents plucked him out of a life working on the farm or in a textile mill and catapulted him to stardom. His career-defining moment occurred when he performed with Bill Monroe and the Blue Grass Boys at Nashville’s Ryman Auditorium in 1945, and, as some believe, classic bluegrass was born. He joined guitarist Lester Flatt to form the legendary Flatt and Scruggs duo through the 1950s and ’60s. He even played the banjo on the theme song for The Beverly Hillbillies.

Scruggs earned Grammy Awards; was inducted into the Country Music Hall of Fame; has a star on the Hollywood Walk of Fame; and performed with such musical icons as Elton John, Don Henley, and Johnny Cash. Not bad for a farm boy from a dirt-road whistle-stop called Flint Hill.

Scruggs died in 2012 at the age of 88; two years later, in January 2014, the Earl Scruggs Center had its grand opening. By then, the once-neglected courthouse had been restored to its former glory: With its columns, porticos, and cupola, the stately structure is the centerpiece of Shelby. 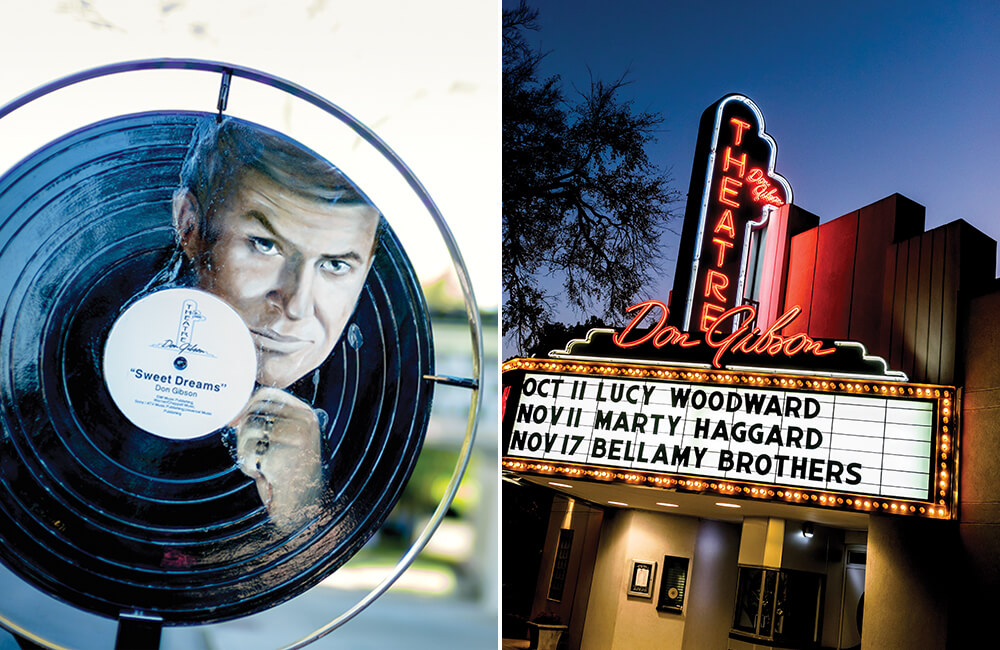 Don Gibson’s legacy is all over Shelby, from painted records on the streets to his name topping all others on this downtown marquee. photograph by Charles Harris

Inside, interactive exhibits tell the story of Earl Scruggs — and of the music, history, and culture of the region. As of July, people from 49 states and 13 countries had visited the center, “many of those people literally getting on airplanes and coming because of the Scruggs Center, including some folks from Japan,” Epley says. Indeed, Shelby has become a destination.

When the owners of Newgrass renovated the former Hudson’s Department Store building for their brewery, they built a stage to showcase a new generation of pickers, strummers, and players. On certain nights, when bands take that stage, the order of a Five-String Wheat or a Fiddler’s Dream IPA comes with a side of the real thing: a banjo’s twang or a fiddle’s reel.

Inside the brewery after sunset or on the sidewalk at lunchtime, in Shelby, the music always plays on.

A Taste of Shelby

You might say that this Cleveland County town is big on pig. 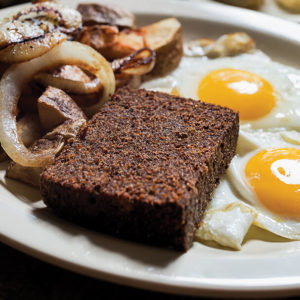 Shelby has claimed livermush since at least 1933, when two local businesses — Mack’s Livermush and Jenkins Foods — got their start. In 1987, the Shelby City Council passed resolutions proclaiming livermush “the most delicious, most economical and most versatile of meats.” The town hosts the North Carolina Fall Livermush Festival, also known as Mush, Music & Mutts, every October, but you can try this regional delicacy anytime at the Shelby Café. Ellen Gragg orders hers crispy. “This is pretty much the only area of the state, and certainly of the Southeast, that has livermush,” she says. “When my granddaughter comes home from Washington, she wants some frozen to take back with her.”

Photo: At the Shelby Café, order livermush as a side, or as part of a basic breakfast combo. 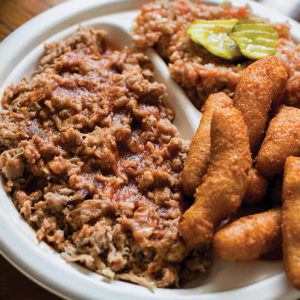 Bridges is synonymous with barbecue in Shelby, where not one, but two barbecue joints operate under the Bridges name. Fresh out of the Army after World War II, Red Bridges opened his restaurant in 1946, trained by renowned barbecue master Warner Stamey of Greensboro. Stamey also trained his brother-in-law, Alston Bridges — no relation to Red — who opened his restaurant in 1955. Both serve classic Piedmont-style barbecue: chopped pork shoulders slathered in red sauce, paired with hush puppies and a zesty slaw. The folks at each restaurant claim there’s no rivalry; each has legions of loyal fans who can vouch for their barbecue mastery.

Photo: Get a plateful at Alston Bridges Barbecue: slaw, hush puppies, and plenty of pork.