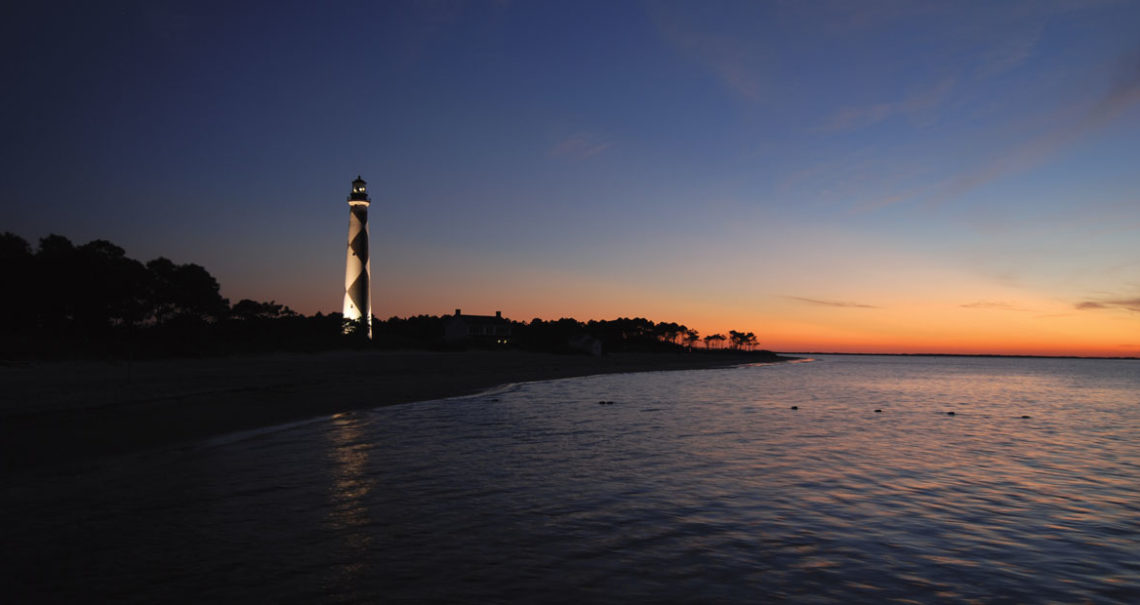 Cape Lookout Lighthouse has been waving sailors off the deadly shoals of North Carolina’s coast for 150 years.

It has remained steadfast through deadly hurricanes that wiped out entire villages and has managed to stand its ground even as the sand beneath it shifted and endangered its very existence.

The thin strip of island wilderness on which it stands was rescued from the threat of development in the 1960s, when the state bought the land from would-be seaside homeowners and 10 years later created Cape Lookout National Seashore.

The light, however, may have disappeared altogether had a ragtag group of Confederate soldiers completed a mission to destroy the light after it fell into Union hands.

And, depending on whose account you read, they nearly did.

“That tale is a small part of the lighthouse’s story, but it’s one of the more exciting ones,” says Karen Duggan, an interpretive park ranger at Cape Lookout National Seashore. “These are wonderful tales that are big and exciting. But when you start digging into it, you start finding out other things.”

Those other things are boastful letters and war stories that have survived generations of storytellers.

Civil War on the coast

When North Carolina, the last state to join the Confederacy, seceded from the Union on May 20, 1861, its lighthouses went with it. Confederate forces quickly moved up and down the Atlantic and Gulf coastlines and removed the lenses from every lighthouse, denying aid to Union ships as they sailed past.

In North Carolina, that meant certain death for many sailors on both sides of the war. During the Civil War, 52 ships in all sank off the coast. The masts that disappeared beneath the choppy Atlantic flew flags for both the Union and the Confederacy.

The ocean waters that slap against North Carolina’s coast are considered a graveyard for sunken ships. One particular sandbar that streams off of Cape Lookout Point stretches 14 miles out to sea. It lies almost perpendicular to the shoreline, creating a deadly finish line for ships passing above.

To make the trip down the coast even more difficult for mariners who try to navigate around the danger, the shoal shifts — often. And, it’s not always visible.

It’s estimated that more than 2,000 ships met their end off North Carolina’s coast, many of them after becoming lodged on this thin finger of sand. As early as the 1500s and as late as World War II, sailors were dying off our state’s coast.
The Confederacy knew the importance of the lighthouses, and their plan to disable the beacons set the stage for the Cape Lookout Lighthouse’s first tall tale.

Since that time, Duggan says, Northerners have recounted that Confederate troops simply vandalized the lighthouse and stole the lens on top.

“You see that repeated in stories, but it was a planned removal, and they were put into storage,” Duggan says.

A plan for retaliation

In 1862, Union troops reclaimed the coastline after key battles, including the fight at Fort Macon. A smaller lens was reinstalled at Cape Lookout to help the Yankee ships move south safely.

That move angered the Confederates. So, they made a plan to retaliate: They would destroy Cape Lookout Lighthouse.

“An attempt was made to destroy the lighthouse, but all they did was burn some oil and now our boys are chasing them.”

A small band of Confederate soldiers made their way from Goldsboro to the lighthouse and reached the island on the night of May 3, 1864. Three days later, Col. John N. Whitford of the 67th North Carolina Infantry reported to his superiors that the lighthouse had not only been disabled, but also had been destroyed beyond repair. He also claimed the group blew up not just the lighthouse, but also the original, smaller light that stood nearby.

Not only was the secret mission successful, he wrote, but also the Union had sent nearly 200 men in search of the small group of Confederates and still could not find them.

In his letter, Whitford boasts, “The boys acted well but cannot travel much as their feet are badly bruised.”

Whitford’s superiors wrote another letter to Richmond requesting that the men who led the raid be “entitled to great praise if certainly not reward.” This correspondence describes the lighthouse’s walls as “injured, cracked and bulged out.”

“People find that one, and they think it’s a wonderful thing. It’s a wonderful tale,” Duggan says. “The Confederates make it sound really big, like they blew everything up, and people embellish upon that.”

However, reports made by the Union commanders tell a very different story. In a letter to his superiors, Benjamin Dove, commander with the North Atlantic blockading squadron, called the Confederate soldiers “four or five mischievous persons.”

He wrote that an attempt was made to destroy the light, but it was only partially successful. Two kegs of powder were exploded, glass was shattered, and the oil cans were destroyed. Several stairs leading to the top of the tower were also ruined.

Dove said a small crew from the supply ship, USS William Badger, was sent ashore and “repaired the damage sufficiently to keep the light going, but not so bright as usual.”

In recent years, the park staff received another clue about the destruction of the lighthouse. A family visiting the park brought with them a letter from an ancestor who was aboard a Union blockade ship during the raid. His description of the event warranted a single sentence.

According to Duggan, the letter reads, “An attempt was made to destroy the lighthouse, but all they did was burn some oil and now our boys are chasing them.”

“That’s basically it, and he goes on to other news,” she says.

Today, it’s still obvious where repairs were made to the stairs, Duggan says, although there’s no evidence that the walls ever cracked or bulged. As for the destruction of the first light, that never happened either, she says.

Soon after the current light was finished in 1859, the first, smaller light was converted to a keeper’s quarters, and its light was removed. That structure was still standing in 1868, long after the Confederates claimed to have blown it to smithereens.

“Unless all they did was burn the wooden exterior of first lighthouse, I’m not sure what they’re talking about,” Duggan says. “There’s still some investigation that has to take place to reconcile the two reports.”

Duggan says she hopes that someday, someone will find the reports from the Federal Lighthouse Service detailing the list of supplies needed to fix the damage. Until then, no one really knows the extent of the destruction.

“Without that inspection record I can’t say how much any one of these reports is downplaying it or overplaying it,” she says.

Once the war ended, the Cape Lookout light’s lens was found safely stored in the capital building in Raleigh, along with the lenses for nearly every North Carolina lighthouse. Some of the lenses were shipped to their manufacturers in Europe for refurbishing and then returned to their full glory atop the lights.

However, in the 1970s, the United States Coast Guard, which owned the lighthouse, replaced the Cape Lookout lens with a modern light. Years later, the original lens was loaned to the Block Island Southeast Lighthouse in Rhode Island, and that’s where the lens shines today, casting light out above a northeastern coastline. 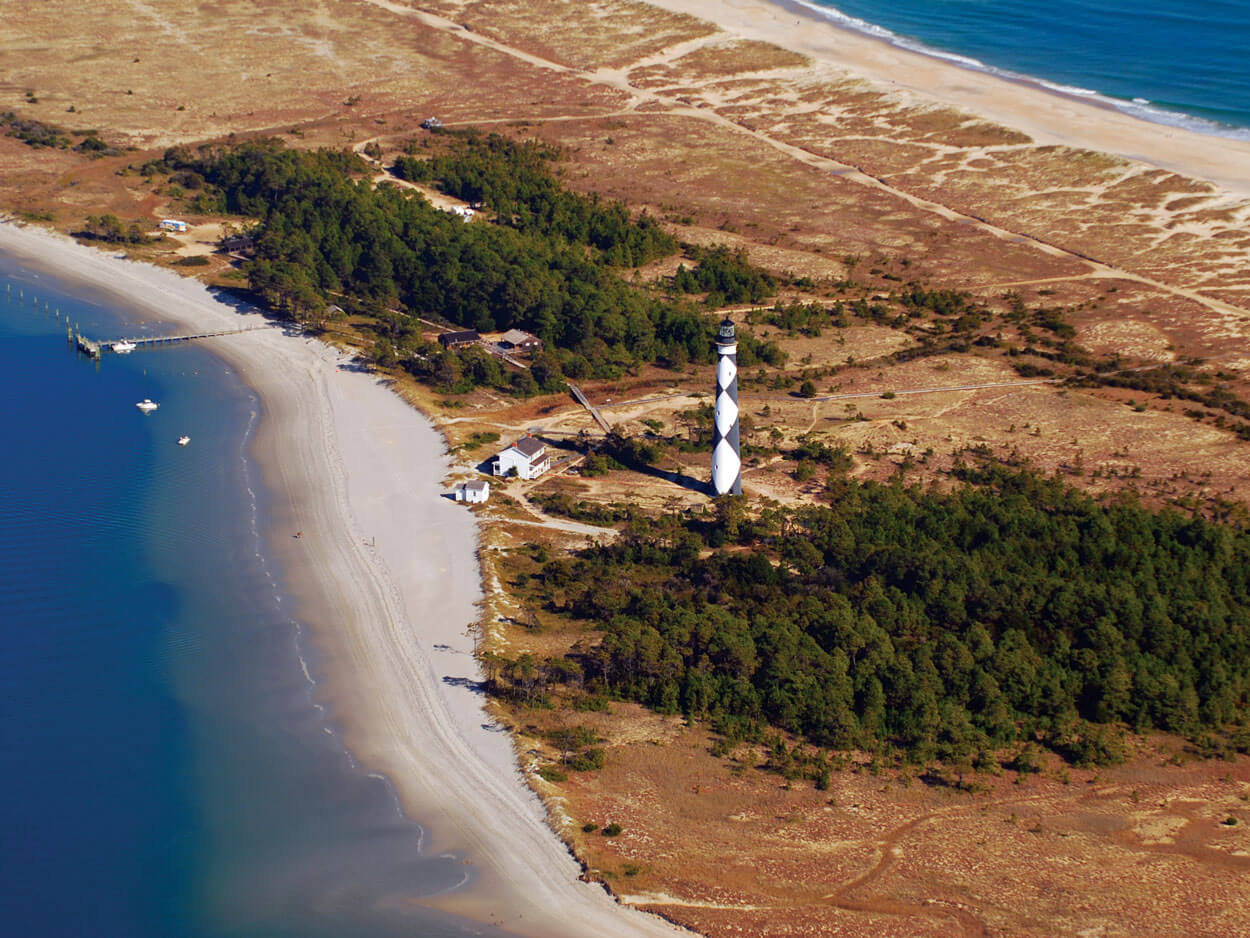 Located on the uninhabited Core Banks Island, Cape Lookout Lighthouse can be reached only by boat or by passenger ferry. photograph by Peter Doran

In recent years, the only battle the lighthouse has made for survival is against the sand it sits upon.

The Barden Inlet, created during a hurricane in 1933, moves and flows with the water. Over the years, it has allowed the Atlantic to move dangerously close to the lighthouse.

“Inlets do all kinds of squirrely things,” says Wouter Ketel, park ranger at Cape Lookout National Seashore. “Sometimes they move with the direction of the current. They grow bigger and smaller and sometimes move in erratic directions.”

In the late 1970s, the United States Army Corps of Engineers worked to halt the erosion. A direct hit from Hurricane Isabel in 2003 eroded another 20 to 30 feet of shoreline, knocked down a coal shed, and threatened the keeper’s quarters.

And many in the area think it’s a landmark worth perserving.

“A lot of people would argue that it’s a lost cause on a barrier island,” he says. “But a major role of the park service is to protect our history and those places that mark important events of the nation. The lighthouse is one example of that.”