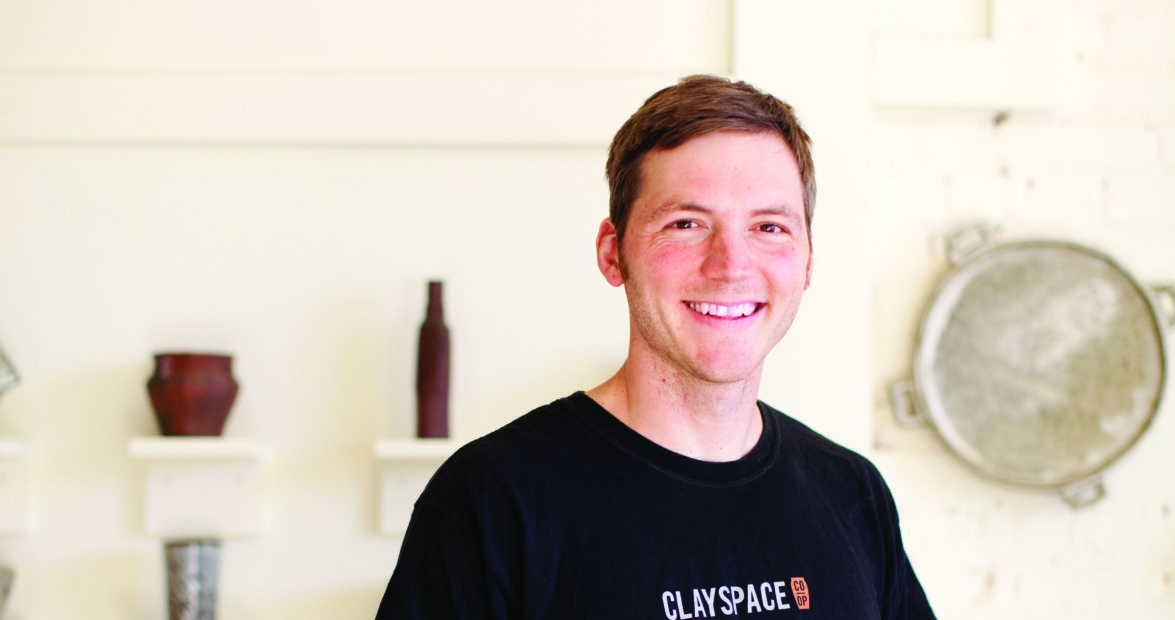 When ceramist and Clayspace Co-op founder Josh Copus was still an art student at the University of North Carolina at Asheville, he had a realization. In his classes, he was encouraged to make something unique but, “everyone was working with the same material. It was all homogenized,” Copus says.

So, when a rock enthusiast introduced Copus and Clayspace founding member Matt Jacobs to a trove of local wild clay, the potters knew they were on to something. “We were down there high-fiving and loading up the truck like a bunch of giddy school kids,” Copus remembers.

That iron-rich earth, used by Copus, Jacobs, and Clayspace Co-op member Eric Knoch, is a departure from widely used commercial clay. The wild clay is distinct for its rusty metal look (when fired unglazed) and for its source: a farmer’s field in Leicester.

The farmer (who had turned up the treasure while digging a drainage ditch) understood Copus’s excitement. “There’s such a history of pottery in North Carolina that it’s infused in the culture,” Copus says. Turns out the farmer owned handmade pottery passed down through generations.

Copus has dug two dozen dump-truck loads — an amount he estimates will last 40 years. The mound of clay now resides in a long bank on Copus’s Madison County land. That land is also home to the other important piece of the Clayspace puzzle: the kiln known as The Community Temple.

“Eric and I learned to build kilns by building kilns,” says Copus. When he first began his career as a ceramist, he used other people’s kilns to fire his pots. “I’d just gypsy around,” he remembers. “That was cool because I got to see how other people did it.” And attending to the fire, or “being the overnight guy,” was a good way to gain favor among kiln owners.

Gypsying around sounds romantic, and as a student (Copus did two terms as a work-study recipient at Penland School of Crafts, where he met many area potters) he was more than willing to work. “I was manning the night shift for three kilns for awhile,” he says, laughing. “But firing was just part of it. I felt like I was getting so much on top of that, like seeing successful models of how to do this.”

Although a place to fire ceramics is necessary to the pottery-making process, Copus points out that “it’s unusual for young people to have access to that kind of setup, right out of college.” So, when he was awarded a $15,000 Windgate Fellowship through the Center for Craft, Creativity, and Design in Hendersonville in 2006, he used the money to purchase a piece of property near Marshall, and he built the Community Temple, a 27-foot long, three-chamber wood-burning kiln. “I wanted to expand [the grant money] to my friends as much as possible,” he says.

These days, both the size of Copus’s work and the persnickety nature of his native clay require a kiln he can control. The Community Temple is part of the vision-in-progress, as is the Clayspace Co-op studio in Asheville’s River Arts District.

That area, recently added to many tourist agendas, was once the hub for the mountains’ cotton mill industry and now houses welcoming bastions of glass blowing, painting, sewing, dancing, clay-throwing, and other creative endeavors. Clayspace’s studio houses a light-filled, clean-swept gallery and the 1,200-square-foot workplace of five other ceramists: wood-fire potters Matt Jacobs, Eric Knoche, and Melissa Weiss; salt-fire potter Kyle Carpenter; and wood-fire and soda-fire potter Heather Tinnaro. The collective studio was envisioned when Copus and Jacobs were students and needed more room for construction than the college studio could provide. Although staples such as mugs and teapots factor in both Copus’s and Jacobs’s inventories, they wanted to make big pieces, and they wanted to work late into the night. But what began as an act of rebellion — the bad boys of the art department — quickly translated into an exercise in cooperation and shared resources. And the experiment is a success: The Co-op’s members have garnered accolades and spots in juried showings.

“One of my main goals is to develop connoisseurship,” Copus says. He also develops, among his tableware and sculptural pieces, voluptuously curved, large-scale vases. These vessels manage to be both graceful and earthy, their glazes sometimes rough and mineral-rich, other times creamy-smooth but always begging to be touched.

The River Arts District Studio Strolls, open house-type events where people can roam in and out of the studios, happen twice annually, in June and November. They are a boon and, says Copus, “not just sales-wise. I get fulfilled; conversation feeds me. I get exposed to my local community.”

Community resonates like a mantra at the heart of Clayspace. To fulfill his bachelor of fine arts degree at UNCA, Copus completed a project called “Building Community.” It included a wall of 1,000 handmade bricks stamped with the word “Individual” and another 1,000 loose bricks stamped with the word “Community.” Art enthusiasts who attended the installation were invited to take a “Community” brick with them. One viewer, Tim Schaller, went on to open the Wedge Brewery in the River Art District’s Wedge building, a sprawling industrial construct that also houses Clayspace. Schaller was so moved by Copus’s “Community” bricks that he incorporated one into the wall of his taproom and named a beer — the popular Community Porter — for the idea.

Copus, in return, mans the bar twice a week, but that’s hardly where the Community theme ends. In August, Copus extended the reach of his community with the first Carolina Kiln Build, a three-week building intensive. “There are workshops, but they cost a lot. The kiln build was my way of giving back.” He adds, laughing, “It wasn’t free; it just didn’t cost money.” Ten participants from North Carolina and around the country completed two wood-burning kilns, taking away valuable knowledge and providing Clayspace with additional firepower.

But as much as the kiln build taught aspiring crafters that important construction skill, Copus waxed rhapsodic about the rest of the experience. “Total immersion,” he says. “We rented a neighbor’s guest house. We worked, ate meals, and lived together in community.”

Copus sees the future of Clayspace — say, the next five years — including some solitary time. He plans to build a one-person studio on his land. He’ll shift some of his production from the River Arts District location, making more room for the other Clayspace Co-op members. But eventually the one-man, Marshall-based studio will become the showroom for a much larger workspace that can accommodate the entire Clayspace crew.

Still, Copus doesn’t plan to leave the urbanscape of Asheville’s River Arts District behind. “The country doesn’t satisfy all of my needs. It’s isolated,” he says. Gesturing to the dusty shelves and light-dappled floor of Clayspace he adds, “This place is a huge part of my identity. I like the activity and the interaction.”

And, while much of that integral interaction is with the other Co-op ceramists, Copus is always quick to include the outside community — tourists, art enthusiasts, serious collectors, and curious passersby — when chalking up important connections. “The reason people need this” — he nods to the handmade coffee mug almost always in his grip — “is the same reason they need to get out in nature or to visit a farm. To reconnect. When people come here, they get to meet the artists; they like that. I’m in here being as real as I can because people are buying a part of my life.”