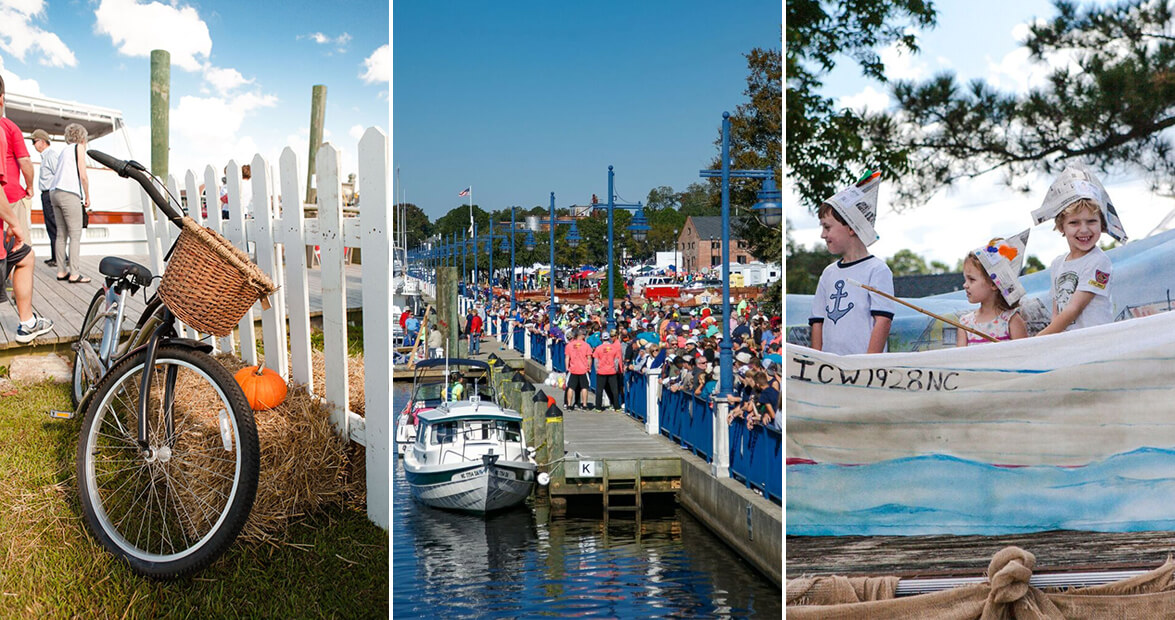 Intracoastal Waterway Celebration • Belhaven • September 17
Celebrate the 88th anniversary of the completion of the canal that connects the Alligator and Pungo rivers, an engineering feat that played an important role in the creation of the Intracoastal Waterway. Festivities kick off with a blessing of the waters and conclude with a chowder tasting. Throughout the afternoon, guests can enjoy live music; a beer and wine garden; displays featuring classic cars, boats, and the work of local artisans; and more.

Pickin’ on the Pamlico • Washington • September 24
Blue crabs abound at this annual festival hosted by the Washington Harbor District Alliance along the riverfront. Plucked straight from the Pamlico, crabs are all-you-can-eat and served alongside fried chicken and a scrumptious selection of down-home sides. Event proceeds will go toward the alliance’s mission of revitalizing downtown Washington. Make a day out of your visit to Washington; before the festival, pay a visit to the Turnage Theater for the Hands on Arts Fall Festival. This festival, organized by Arts of the Pamlico, will feature a selection of juried arts and crafts and runs from 11 a.m. to 6 p.m.

70th Chowan County Regional Fair • Edenton • September 27-October 1
Taking place on the American Legion Fairgrounds, the Chowan County Regional Fair offers a weekend filled with fun for the whole family. Each year, the fair strives to educate people of all ages, while making sure folks have a great time. You can expect exciting rides, a wide variety of food vendors, art exhibits and demonstrations, live entertainment, and much more.

37th Annual Riverfest • Wilmington • October 8-9
Along the Cape Fear River in historic downtown Wilmington, enjoy the city’s 37th annual Riverfest. This year’s theme is “Celebrate Art on the River,” with a focus on the visual and performing arts. There will be special exhibits and vendors selling art and handmade crafts, and a vintage car and truck show on Market Street. Food vendors and live entertainment showcasing local talent will be abundant both days, as well as fun activities for children and families.

MumFest 2016 • New Bern • October 8-9
New Bern’s charming downtown and stunning waterfront is transformed by a buzzing street festival, with more than 60,000 visitors each year — and 2016 will be no different. MumFest combines local attractions and talent, great food and craft vendors, and activities for children and families. The Tryon Palace Gardens will be free and open to the public during festivities. Make sure to purchase tickets to the October 7 MumFest Concert, which features a lineup of both local and national talent that you won’t want to miss.

The Outer Banks Seafood Festival • Nags Head • October 15
Sample a variety of good eats and the freshest seafood around from beloved local institutions. While getting your fill to eat, enjoy tunes from local bands and a riveting conversation about Outer Banks brogue, the region’s time-honored dialect, between local personality Ken Mann and linguist professor Walt Wolfman.

36th Annual North Carolina Oyster Festival • Ocean Isle • October 15-16
This annual festival is about more than just oysters; it boasts local cuisine ranging from seafood to barbecue (and of course, our favorite bivalve) and showcases a variety of local artisans whose mediums range from pottery to jewelry. There are children’s activities, live entertainment, Saturday’s 2016 North Carolina Oyster Shucking Championship, and the “Shaggin’ Oyster” shag competition on Sunday.

Smoke on the Water • Washington • October 21-22
Everywhere you turn, Smoke on the Water offers something to savor, be it food, art, or music. This pig cook-off and festival on the Washington waterfront boasts local vendors and live entertainment, dragon boat races, a car and truck show, children’s activities, and more. Participate in the barbecue contest and the chili cook-off, either as a competitor or an appreciator. Festival proceeds benefit community programs such as the Beaufort County Red Cross and the Boys & Girls Club.