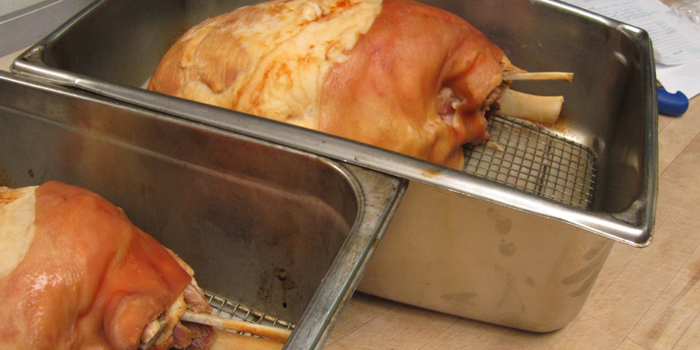 It wasn’t until I moved away from Craven County that I realized that corned hams were not standard holiday fare. Growing up in New Bern, we had always had them. The first would appear beside the turkey at Thanksgiving. The last would probably be at New Years. By spring, we were back to “pink” hams for Easter lunch and corned hams were put aside until the next winter.

Everyone loved them but nobody made their own. You had to reserve yours in advance. On one hand they were mysterious but on the other they were easy to come by with planning.

I came to Chapel Hill in 1967. From time to time my father would put a corned ham on the bus for me and I would cook it for friends. Corned hams travel remarkably well in the cargo bay of a bus. My friends were always amazed by this dish and dinner parties often concluded with everyone standing around in the kitchen picking at the leftover ham long after dinner was over.

Rinse and dry the ham. Use a sharp boning knife to make a three or four inch incision at each place that the bone protrudes from the meat. This is usually three places- one at each end and at one place on the side. Pack as much salt as possible into each of these incisions, then cover the outside of the ham with a thin layer of salt. Place the ham in a non-reactive pan and cover with first plastic wrap, then foil. On the evening of the eleventh day wash the ham and flush the salt out of the pockets that you cut. Soak overnight in fresh water.

The next day, dry the ham and put it on a rack in a roasting pan. Put a little water in the bottom of the pan. Cover the ham with a lid or foil for the first two thirds of the cooking time. Cook it at 325 degrees for 25 minutes a pound. Uncover the ham for the last part of the cooking and turn the oven up to 350. This will allow the ham to brown nicely. When it is done, a boning knife will pass easily through the thickest part. I like to cook these hams until they begin to fall off the bone. Let the ham rest a little before slicing. The drippings make a delicious if somewhat salty gravy for mashed potatoes.

As often happens when professional chefs think back, out of the blue it occurred to me that this recipe ought be introduced to the public. At about the same time, my father had tired of putting hams on buses and had asked Gwen at the Pac’a’Sac in New Bern if she would show me how to make my own. I couldn’t believe that I was going to be allowed to learn this secret. I also didn’t believe that I was going to be able to make one. They were so good that it must be impossible for mere mortals to manage it. But, it turned out that the most unbelievable thing was how easy it is to make. You just have to plan ahead.

I now try to serve one every Saturday at Crooks Corner from New Years to Easter. Whenever possible, I use local hams. I take them on the road as well. When we cooked at the James Beard Foundation in New York, the main topic of conversation was not the honeysuckle sorbet as I had expected, but the corned hams.

Want to receive more recipes like these each month?