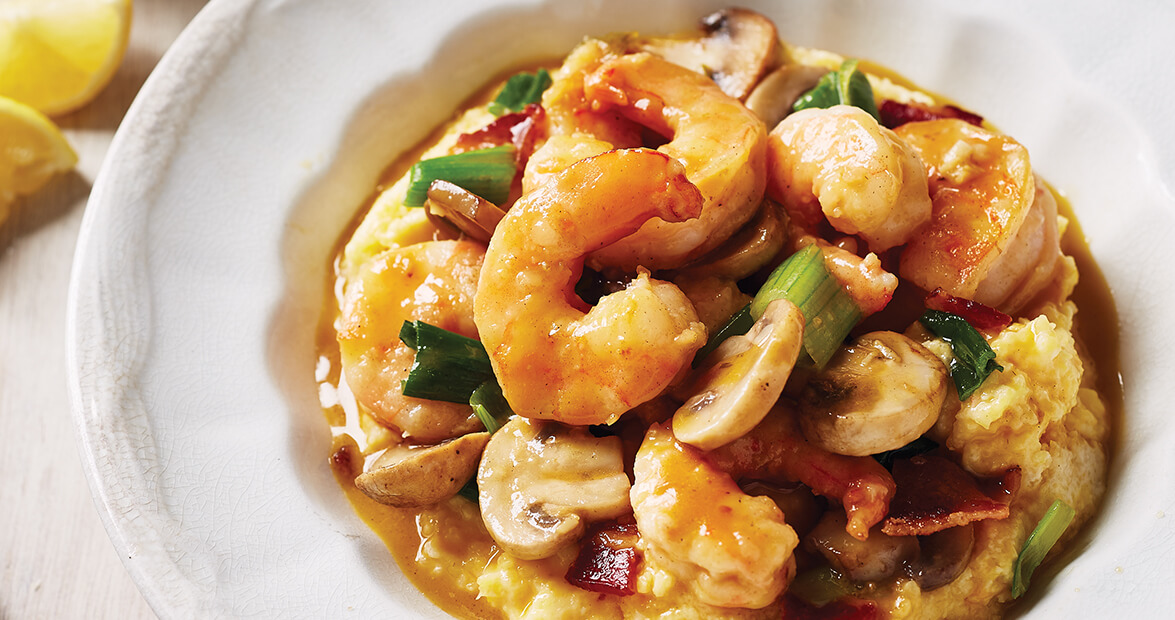 We will never know who invented shrimp and grits. It was likely a hungry, resourceful cook along the coast in the Low Country, where both shrimp and grits were common and plentiful. The earliest records of the recipe describe a very simple dish served as a humble breakfast, little more than fresh shrimp added to a pot of hot grits cooked in clean, brackish beach water.

Over the years, shrimp and grits got fancier, migrated to the dinner table, and became ubiquitous in Southern restaurants. Perhaps no version is more renowned than the one that the late Bill Neal created for Crook’s Corner, the landmark restaurant in Chapel Hill. The dish became famous after Craig Claiborne wrote about it in The New York Times. It’s still wildly popular, and Crook’s, which closed in 2021, served it in the late chef’s style for more than 25 years.

For the cheese grits: In a medium saucepan, bring salted water to a boil over medium-high heat; gradually whisk in grits. Reduce heat to low and simmer, stirring occasionally, 10 minutes, or until thickened. Stir in Cheddar cheese and remaining ingredients. Hold in a warm place or on top of a double boiler over simmering water.

In a large nonstick skillet, cook bacon over medium heat 10 minutes or until crisp; remove bacon, but save all of the grease.

Dust the shrimp with the seasoned flour. In the large skillet, begin to sauté the shrimp in the bacon grease over high heat. Turn the shrimp, and then add the mushrooms. Let the mushrooms cook a moment, then begin tossing in the skillet, as for a stir-fry. Pour off some of the grease if it appears too oily.

Cook for a minute or two more, until the shrimp and mushrooms appear to be done and have browned a little. Add garlic and sauté 1 minute, shaking the pan vigorously. Add the lemon juice and Tabasco, and cook 2 more minutes, stirring to loosen particles from the bottom of the skillet. Add the scallions and toss to combine. Add salt and pepper to taste. Spoon shrimp mixture over hot cheese grits; sprinkle with bacon.