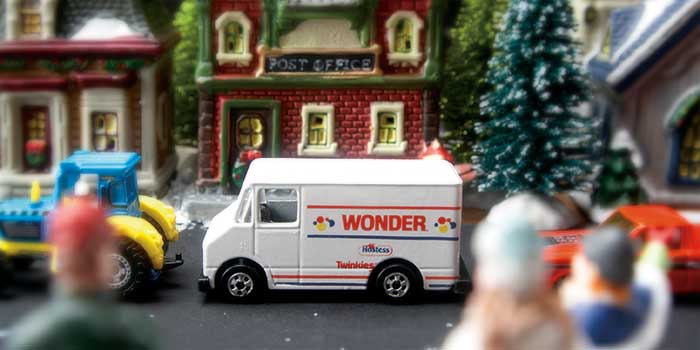 This would have been in Liberty, North Carolina, around 1963, maybe 1964. My father managed a satellite office of The Chatham News in Liberty, and was therefore probably on the clock, covering the parade, and had brought his five kids along because we couldn’t get enough parade.

The first 10 minutes or so featured the staples of Christmas parades all across the state: floats carrying carolers from local churches, baton twirlers, fire trucks, high school bands. But midway through the parade, along came this bread truck. Even at age 5, steeped in What’s Wrong With This Picture cartoons in Highlights magazine, I had the feeling that somehow this bread truck driver had made a wrong turn and ended up smack in the middle of the Liberty Christmas parade. Then, from the open door of the step van, a man in a blue uniform tossed out bread. Tiny loaves of bread, shaped and packaged just like a real loaf, but shrunken to about an eighth the size, as if manufactured for a baby.

At first we kids just stared. Bread? In a Christmas parade? Do what? Where was our
Bazooka gum, our Squirrel Nut Zippers?

I love bread. I’ve been known to judge a restaurant by whether or not they bring me fresh bread before they take my order. But it’s not something I wanted thrown at me from a step van, while waiting, as sweet-toothed as the next 5-year-old, for Santa Claus to come to town. Yet as soon as that bread hit the ground, we were out in the street fighting over it.

Now I know it was Wonder Bread, because I remember (in the way that your childhood memories are composed primarily of colors and smells) the red, yellow, and blue dots decorating the package. If I can’t remember what it tasted like, this spongy, half-smushed white bread, how can I claim it was the best bread I ever tasted? Maybe because it brings some mystery back to the image of the unraveling of the Clinton Christmas parade, which, years later, I would, in my dramatic teenage way, describe to my friends as “post-apocalyptic.”

But it would be years before I would witness that unraveling, and in those intervening years I anticipated the parade with an excitement greater than the fireworks display on the Fourth of July.

I was 6 when we moved to Clinton. Since Clinton was bigger than Siler City and Liberty put together — plus Bear Creek and Mount Vernon and perhaps another Chatham County hamlet — I had high expectations for my first parade there.

Indeed, this was pageantry on a grander, if breadless, scale. We could hear it 20 minutes before we saw it: the sirens from the squad cars, the drum line keeping time for the line of floats and tiny, tricked-out Shriner cars and marching bands snaking from the Clinton High School parking lot right up Sunset Avenue to the courthouse square.

We always arrived early to stake out our perfect vantage point: a curb in front of Butler’s Drug Store. When else are kids allowed to sit on the curb? Some of the more cautious adults brought lawn chairs and blankets to wrap their children in on the rare early December morning when it was actually cold, but kids never get cold and sitting on the curb seemed to us as daring as skydiving. So close to the action, we could fairly count the teeth on the horses that passed by after the Shriners, whose crazy little toy cars buzzed with impunity around the police car, the usually stern police chief laughing at the Shriners along with us as he drove as slowly as any of us had ever seen a police car move.

Thank goodness for those Shriners, dressed as clowns and honking their red rubber noses and slapping their size 30 shoes on the street. Their shenanigans always invigorated the beginning of what, in my preteen years, would lag a bit in the middle, as the Corvette or Camaro or Corvair convertibles inched past, beauty queens perched on top of the backseat, waving as stiffly as the queen of England. Then came the classic cars: Model T’s and Model A’s, perfectly restored and buffed to a mirrored sheen, more interesting to me than the latest models bearing the beauty queens, on whom a few years later I would be so fixated that I would not even notice the make of the car they were riding atop.

Though the parade seems, in retrospect, to have been oddly pitched to lovers of all things automotive, there were always horses. More often than not the horses were ill-behaved, irritated by the stop-and-go progress of the parade. Sometimes they tore off wildly sideways and occasionally they half-bucked. That was super cool to those of us raised on Clint Eastwood movies at the drive-in: Wild horses in front of Butler’s Drugs! Invariably the horses would go to the bathroom on the pavement, which was hilarious to us grade-schoolers, but not so funny when, in high school, during my brief stint in the marching band run by a man more drill sergeant than band director, we were forbidden to break formation to stutter-step around a pile of manure during our squawky rendition of “Santa Claus Is Coming to Town.”

And he was, Santa Claus. He was already in town. But of course he was the finale, and he was — as always, to every kid who stayed up as long as we were allowed on Christmas Eve, hoping to hear his sleigh bells ringing above us — late. His arrival was delayed, and therefore more anticipated, by the inevitable snarls caused by cheerleading teams stopping to wow the crowd with their routines, or the Shriners bringing everything to a halt to run into the crowd and let kids honk their rubber noses, or the band marking time to serenade the crowd with “Joy to the World” in front of the Presbyterian church.

Finally, here came Santa Claus, on a flatbed truck all fussed up in streamers and papier-mâché to resemble a sleigh. He ho-ho-hoed until he was hoarse, pulled candy from his red felt bag to toss into the crowd. He sported a beard of what seemed to be congealed cotton balls and was not nearly as rotund as I thought he ought to be, even with a pillow or two stuffed up under his velour tunic.

The fact that he didn’t look much like his pictures on our wrapping paper did not bother me for long. Around the time I began to pay attention to the girls riding on the backs of convertibles instead of the convertibles themselves, Santa ceased to interest me.

I was a typical brooding teenager, and majoring in disillusionment, when I finally witnessed the parade dissolve. The end of the parade was oddly unsettling for this too-cool-for-school teenager who preferred The Allman Brothers Band any day to “I Saw Mommy Kissing Santa Claus” or “Silent Night.”

Back at the high school parking lot, the chain of vehicles broke apart and the squadrons of my fellow marchers fell out of formation. I looked around at the empty floats and noticed that half of the streamers had been stripped off by the wind, leaving them in pitiful disarray. I watched Miss Midway High School, whose stunning beauty just five minutes ahead of me made even horse manure endurable, get in the car with her boyfriend. For the entire parade I had entertained a fantasy wherein somehow the band would overtake the line of beauty queens and Miss Midway would ditch the back of the ’Vette to march alongside me, a skinny, bushy-haired boy wearing white spats and a tall, furry hat of the type favored by the guards at Buckingham Palace. Instead, I watched her toss her tiara into the backseat of her boyfriend’s buffed-down-to-primer Nova, which was jacked up as high as Santa’s sleigh.

“Doesn’t this feel a little anticlimactic to you?” I asked a friend who played the tuba, and he allowed as how he never noticed any climax because the weight of that horn was all his poor, sore shoulders would let him notice, and what would be the climax of a parade even if there was one, and anyway, why was I still standing there with my mouth hanging open, staring at everyone leaving — didn’t I have somewhere to be?

His reaction was, of course, just another letdown. Reality returned so abruptly — the streets became once again routes for cars going somewhere — that I felt betrayed by that fleeting hour. But now I realize that the parade was never meant to be anything but ephemeral. The point was not the candy, or Miss Midway High, or even grand-
finale Santa, but the announcement of the Christmas season, which, when the black exhaust from the departing Model T’s cleared, and the Shriners scrubbed off their face paint and changed into their street clothes and headed home in regular-size vehicles to fix a sandwich made of regular-size bread, had officially begun.

Michael Parker is the author of two short-story collections and six novels. A new novel, All I Have In This World, will be published by Algonquin Books in March. He teaches in the MFA creative writing program at the University of North Carolina at Greensboro, and he can’t help but think of Christmas when he eats a tomato sandwich on Wonder Bread. His most recent story for Our State was “Venus Flytrap for State Flower” (November 2013).