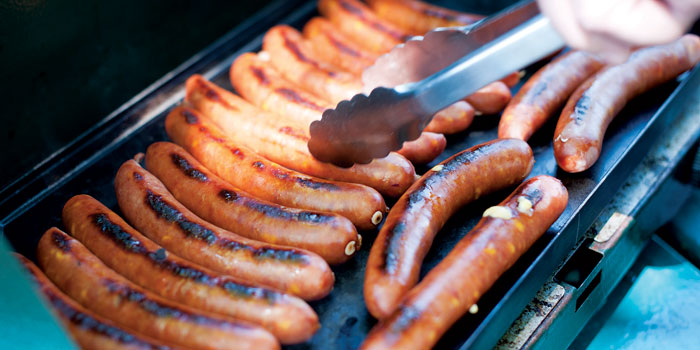 Dave Farley skewers his first hot dog of the day, plucks it from the grease of his Grillin’ Griddle, and holds it up to the light.

He turns it to judge its color, its char, its juiciness, its heft — sizing it up with the same critical eye a wine tourist trains on a glass of chardonnay.

Then, declaring it done, he grips it with one fist and chomps it in half.

On the third Tuesday of every month, Farley leads about 25 hot dog nerds to a picnic pavilion on the Research Triangle Park campus in Raleigh, where they fill up on frankfurters.

Mostly engineers and programmers, the group transforms a weekday lunch hour into a hot dog symposium, sampling the world’s inventory.

“I call this the private stash,” Farley says, dumping five pounds of Sahlen’s hot dogs from Buffalo, New York, on the grill. He drops one dog on the ground, snatches it up, and gobbles it down in three bites.

Farley, a retired IBM engineer and contractor for Lenovo, leads the group as much as anyone, but the club’s namesake is founder Dale Rider, who died in 2003.

When the club began a dozen years ago, five or six men from IBM ruminated about the greatest dogs and began visiting different spots around the Triangle.

“I finished it,” Farley boasts about the 16-ouncer. “Then I wanted another.”

The Dale Rider Hot Dog Club even sampled the dogs at Home Depot.

But Rider was one of the first to question, out loud, the wisdom of spending so much money to sample hot dogs within a half-hour’s drive.

“Why not cook them ourselves?” he asked.

Using their own grill, they could sample hot dogs from around the world. Kobe beef franks from Japan. Buffalo franks from Wyoming. Old Bavarian sausage from Wisconsin. California pinks. Cheddar brats from Erie, Pennsylvania.

To the casual fan, the hot dog is a pedestrian snack unworthy of close examination. To the untrained palate, no hot dog outranks another. But to join the Dale Rider Hot Dog Club, it has to matter to you that a dog is all beef, or that it comes in a natural casing. You have to notice that a Sahlen’s dog from Buffalo is snappier than a Kayem dog from Massachusetts.

In this group of eaters, you can choose from a half-dozen different mustards: Wasabi. Beer. Horseradish. White wine. Brown grain.

“The only time you’re allowed to eat ketchup is when you’re under 18,” Farley says.

Tastes are so specialized within the club ranks that bun preference splits three ways: Sunbeam, wheat, or no bun at all.

Gluttony is not only encouraged. It’s necessary. A dozen people can’t finish off eight pounds of hot dogs in an hour if anybody holds back. But nobody touches Farley’s consumption. Fellow club veteran Ron Yaudes used to follow him around at club meetings, secretly keeping count of what he ate. He’d confront Farley and ask, “Did you know you’ve eaten 10 hot dogs?” Farley would shrug and eat another.

This club takes a lot of business trips, and its members always search out local hot dog brands.

Choosing a dog for variety’s sake doesn’t always work out. The duck hot dogs, everyone in the club remembers, tasted like paste. And the Nebraska franks? They were coarse and greasy.

But even with differing tastes, nearly everybody in the club agrees on the best hog dog ever: Koegel.

Made in Michigan, they’re fat as a garden hose and curved like a smile. To a Dale Rider eater, the goodness is hard to describe. Maybe it’s the dose of paprika. Maybe it’s the nine grams of fat.

When Farley tried one, the all-around taste-and-texture package inspired him to write a raving note to the Koegel management. He got a thankful email in reply, to which Farley wrote, “Do you have hats?”

Farley sports a Koegel ball cap to each Tuesday outing, with the Dale Rider logo — an American flag and a hot dog — stitched on the side.

After an hour under the picnic pavilion, the group shoves its condiments back into coolers and waddles back toward work a few pounds heavier.

All but Farley, who takes advantage of his longer lunch as a retiree and spears one last dog.

Josh Shaffer is an award-winning writer for The News & Observer in Raleigh. His most recent story for Our State was “The Watermelon Man” (June 2012).