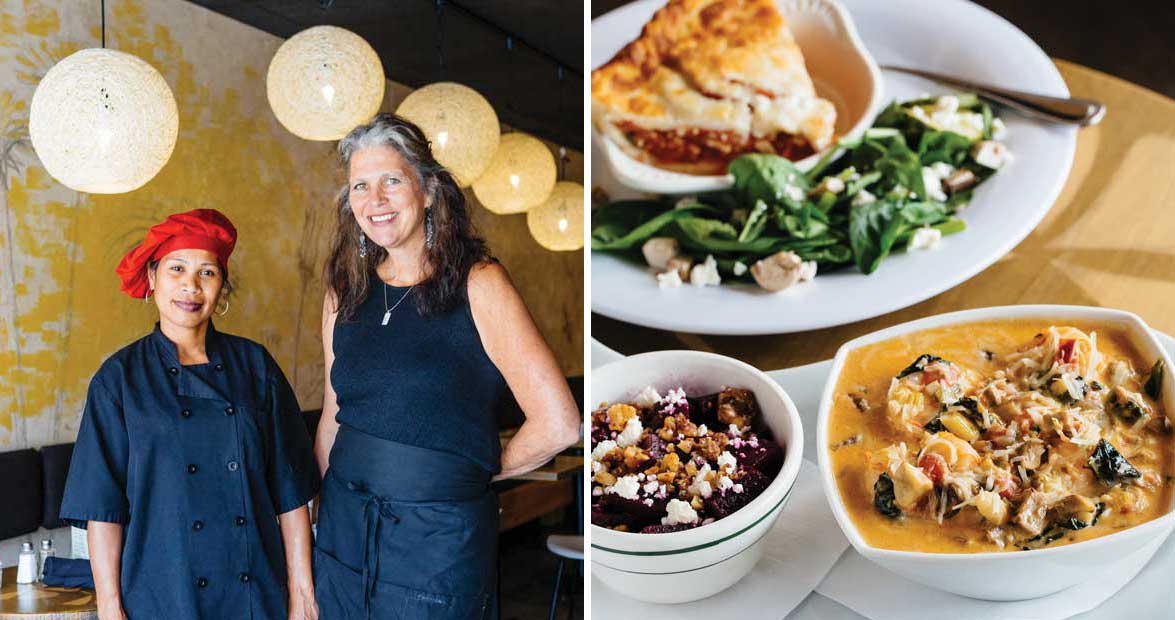 Rose Loch is difficult to spot in Dandelion’s compact kitchen. The café has an open design, but its head line chef glides from grill to prep station to ovens unnoticed by the lunch crowd. It helps that a wall of handmade merchandise — soaps, wooden bowls, pottery, and dandelion-themed knickknacks — separates the dining room from the kitchen.

Invariably, though, while surveying that day’s quiches and paninis and long pans filled with salads — beet, feta, and pecan; cucumber dill; a grape menagerie spiced with cinnamon — customers are greeted by Rose as she chops ingredients for chicken salad. First, you see her red chef’s toque peeking over the top of the display case; then she flashes her oversize smile.

“Hi! How are you?” she asks, her words cheerful, her accent heavy.

Like all of the women working at Dandelion, a nonprofit job training program offered through the adjacent Safelight domestic abuse shelter, Rose’s bright demeanor doesn’t hint at her journey to the restaurant, only where she is currently on her path.

A native of Micronesia who came to the U.S. in 2004, Rose grew up used to more practical fare than what she found in her new home. “Food was not for your taste; it was for your body,” she says. That simpler approach to cooking still yields dishes with big flavors, like grilled mango and strawberry salad, that have found their way on to Dandelion’s menu.

Although Rose is now at ease running Dandelion’s kitchen, she didn’t have that same confidence when she came to the restaurant as a client soon after it opened five years ago. “I was scared of cooking,” Rose admits. Starting in the dish room as an intern, she gradually learned how a kitchen operates. Her attention to detail and organization caught the attention of Dandelion’s original chef, Robin Graham, who mentored and encouraged Rose to move into food prep and eventually cooking.

It was also Robin who cultivated Dandelion’s high-end cuisine for its under-$10, four-season menu. Robin’s recipes, including shrimp and grits and a pimento cheese and bacon sandwich, have become all-season staples. Her tomato pie has garnered such a following that Kat says they have to offer it year-round, despite the less-than-ideal produce available during the winter. “I told customers, ‘These [winter] tomatoes are crud, y’all,’” Kat says. “And customers said, ‘We don’t care.’”

Less than two years after the restaurant opened, Robin died of breast cancer. The popularity of the dishes and the success of Dandelion — and the women who spend up to nine months there learning confidence and skills after an abusive relationship — are her legacy, Kat says.

The many images of dandelions that bloom around the café, often depicted with their feathery seeds adrift in a breeze, are pretty. But the restaurant’s name has a much deeper meaning, Kat explains. Many women can’t escape the cycle of domestic violence because the emotional abuse is so devastating that it hinders their ability to support themselves. “If you feel like you’re nothing and you don’t deserve anything, it’s hard to go get a job,” Kat says. The dandelion is “basically a weed that grows stronger if you get it to grow somewhere else,” she continues. “These women may feel like they’re weeds, but if we transplant them, they’ll grow stronger for it.” 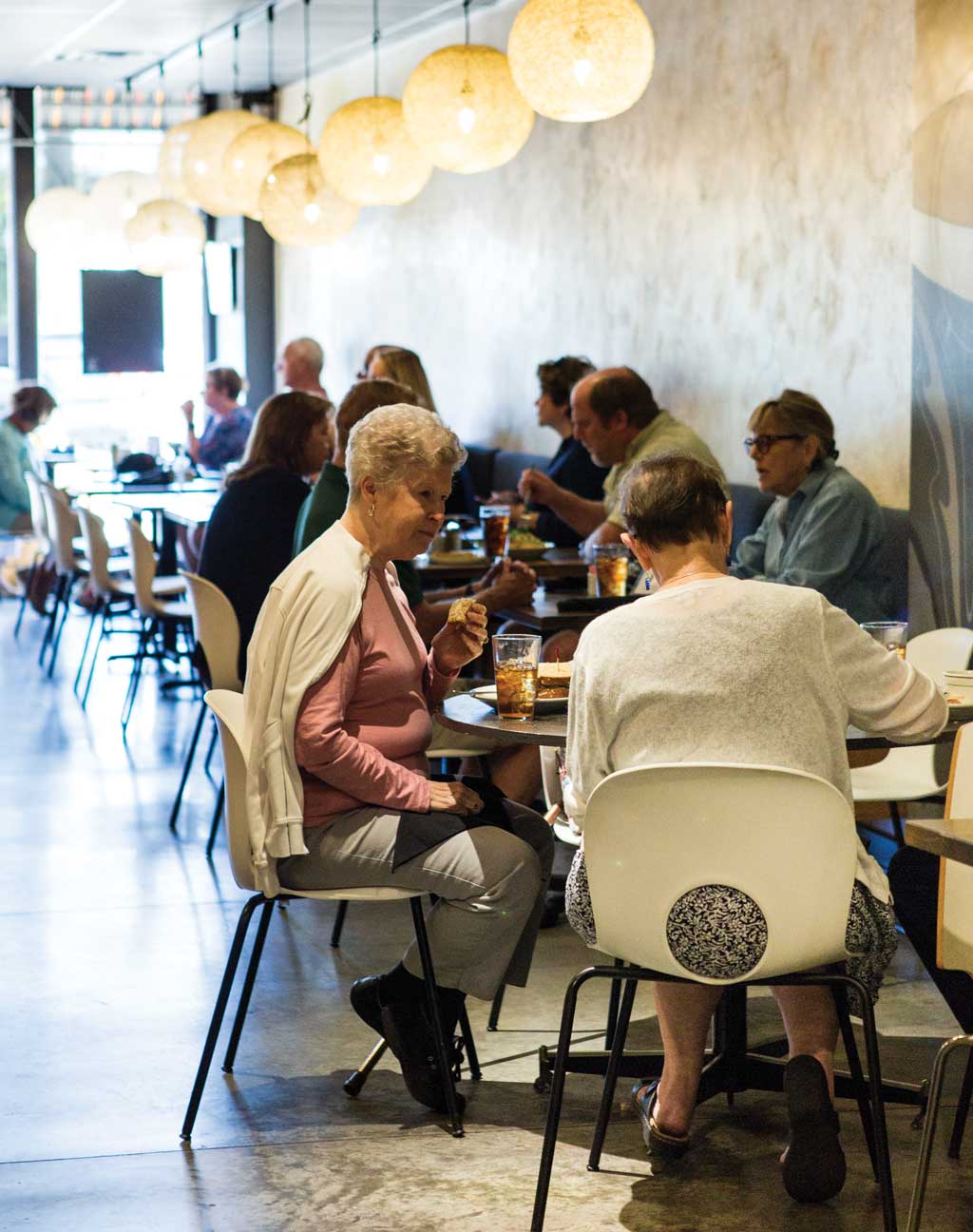 Dandelions pop up around the dining room in the form of light fixtures, stenciled tables, and a mural by local artist Alexis Deal. photograph by Tim Robison

For the 147 women who have gone through the program — and the more than 125 who have been hired by a range of businesses, not just restaurants — Dandelion is the place where they’ve grown stronger.

In the early make-or-break days of the restaurant, people around Hendersonville patronized Dandelion to support the nonprofit’s mission. Within two years, the program was in the black — remarkable for any eatery, but especially a semi-service café that’s only open weekdays for breakfast and lunch. Even more remarkable: Only about 20 percent of the women who come through the program have prior food service experience.

Dandelion caters some program-related events, including Remarkable Women dinners that honor women who have overcome adversity. But opening for dinner and the weekend is not an option because most of the women at Dandelion are single mothers. The program offers day care to cover shifts, but “we had to encompass that mother schedule,” Kat says. In fact, for most of the women, the workday ends in the afternoon when the school bus drops off their children in front of the restaurant.

Locals still make up the majority of its business, but word has spread about the locally sourced menu, the service, and the café’s design. Dandelion now ranks at the top of notable online travel review sites, attracting an out-of-town clientele that is often surprised, and always inspired, by the restaurant’s mission, its success, and Robin’s shrimp and grits.