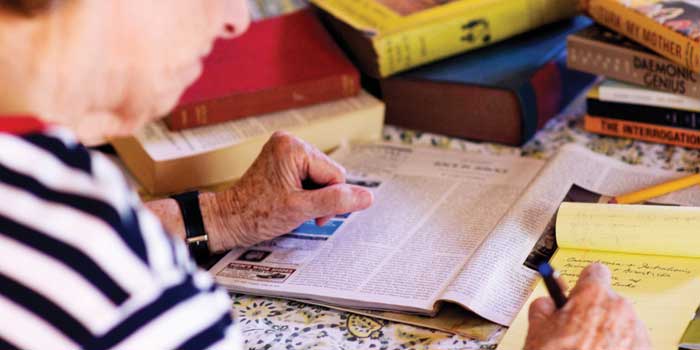 Poet and author Daphne Athas is a woman full of contradictions. She’s lived on the same six acres of land in Carrboro for more than 50 years, but she doesn’t consider herself a Southern writer.

“I’m not an intellectual like Doris Betts,” she says, routinely weaving Greek mythology and Iranian history into her speech. She’s published four novels, a poetry collection, a play, and a multitude of nonfiction books and essays. She won the Sir Walter Raleigh Award for Fiction. Twice.

She taught creative writing at the University of North Carolina at Chapel Hill for 41 years, from 1968 to 2009, and received the university’s Lifetime Mentor Award in 1982. Yet Athas, 87, says she’s just someone who taught in order to write. “I was always a writer first, but I was a teacher in practice.”

Others disagree with her modesty.

“Daphne Athas is such a force,” Hillsborough writer Jill McCorkle says. “I taught at UNC in the mid-’80s and then had the privilege of teaching with her. I admire Daphne so much as a writer and as a person. I admire her literary brilliance and wit, and her unbridled energy and spirit.”

Athas’s upbringing on the “wrong side of the tracks” made her realize that we’re all equals, despite our credentials. “It doesn’t all depend on money,” Athas says. After the Great Depression, her family was forced to move from a comfortable home in Gloucester, Massachusetts, to a house in Carrboro nicknamed the Shack. She grew up playing with Betty Smith’s children, before Smith became famous for A Tree Grows in Brooklyn, when she was poor enough to cry when someone stole her groceries. Athas and her sisters stole money from the church collection box to go to the cinema.

“You had to take an attitude about it,” Athas says. “When you’re up against it, there’s a survival thing, a pride thing.” It was the 1940s, and everyone felt the pinch.

Athas developed an attitude committed to enjoying life and soaking up history. She worked at the Office of War Information in New York City during World War II and later taught as a Fulbright Professor of American Literature at the University of Tehran in Iran, five years before the Iranian Revolution.

“It was the biggest boom town in the world,” Athas says. “The Chinese were there; the Russians were there. Everybody making his way up on that red carpet.”

Athas went to Greece in the 1950s to find out more about her heritage and published a travel book, titled Greece By Prejudice, about her experiences. “My father was a Greek who came from the peasant background, in the sticks,” Athas says. She uncovered family secrets that not even her mother had known. “But that’s another story,” she says, and you can bet it would be a good one.

Her latest project is a collection of essays — not a memoir, she stresses — about her life as it pertains to Chapel Hill. Chapel Hill In Plain Sight has the romantic air of folklore, with tales of hanging out with literary greats Richard Wright and Max Steele, and alleged Communist meetings at the Intimate Bookshop. “I had seen [the town] change so vastly,” she says. “My goal was, here were these things that I had known, and they would interest people who didn’t know.”

Despite her claims, Athas talks and writes with the same literary music she admires in writers such as Carson McCullers, Flannery O’Connor, and Doris Betts. It’s clear that North Carolina adopted Athas long ago. She’s rooted in Carrboro, next to her parents’ unusual, U-shaped house that faces south.

Louisa Dang is a freelance writer based in Burlington.