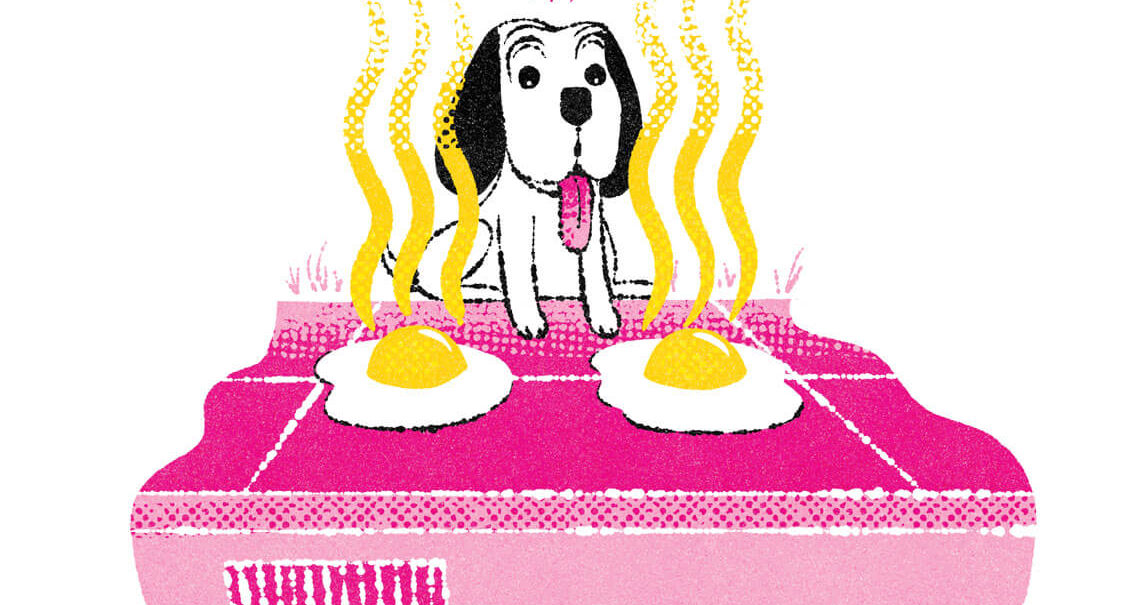 There are those who don’t believe in mentioning the weather. I am not one of them. I love to talk about how hot/cold/rainy/muggy it is, but talking about heat is my forte: I grew up in eastern North Carolina, spent most of my life in the Piedmont, and recently migrated to central Texas, so I have experience in this area.

I had a friend who, when I told a whopper, was not content to say I lied “like a dog” or “like a rug.” You lie like a dog wrapped up in a rug, he used to say, for everyone knows that combining two clichés escapes the hackneyed. In describing my level of discomfort during the dog days, I have been known to say, “I am as hot as a dog wrapped up in a rug and left out in the parking lot of a Kmart.” (Kmarts are almost extinct, which makes it hotter.)

To make metaphor is to transcend the commonplace through imagination and is therefore always a triumph, but in the case of talking about how hot you are, you need to go long and wide with your metaphors. It is less about originality than the clock: The longer it takes you to say just how hot it is, the closer you get to sundown, when the temperature might drop a few degrees. Ergo, “I am as hot as a dog wrapped up in a rug and left out in the parking lot of a Kmart on the outskirts of Whiteville on a Sunday afternoon” — Sunday afternoons being the hottest — or “I am as hot as a soldier just off the bus at Cherry Point sent for a 10-mile march in boots and fatigues while carrying a 40-pound pack and an empty canteen.”

Drag it out though we may, there is no good way to accurately describe those insufferable days that take over in late June and can last through mid-September. The most common terms, or clichés, given to articulating the heat are “blanket,” “oppressive,” and “sultry.” All of these are true, if threadbare.

I remember the first time I felt the oppressive blanket of those sultry dog days. It was in 1966; my family had just moved east, from Siler City to Clinton. For some reason, we arrived before the house was ready, and the five of us sat in the front yard, waiting for the previous owner to finish cleaning. The yard was sandy and filled with cockleburs. Just across the country road, a field of tobacco steamed. I remember feeling my clothes stick to my body. My mother took pity on us and allowed us to drink soft drinks, specifically something called Kickapoo Joy Juice, which did next to nothing to slake the thirst that overwhelmed us by 10 a.m. Finally, my father came outside in a fury and said that it would take another couple of days to get the house ready, so we got in the car and drove 30 miles south to White Lake, where we spent the weekend sitting in the lukewarm water beneath the giant cypress and bay trees.

I remember the first time I felt the oppressive blanket of those sultry dog days.

It made no sense to me, then, that a paltry distance of 90 miles could make such a difference in temperature. Yet I have often had arguments (that is to say, I have often started arguments) about which town is the hottest in North Carolina. Fayetteville, Jacksonville, and Goldsboro often top the list — there must be something about the presence of the military that raises the temps a few degrees, or maybe it’s a feeling of sympathy induced by seeing those soldiers dressed in long sleeves and combat boots on an August afternoon. Wilmington crops up, as do other river/coastal towns — Morehead City, Elizabeth City — though at least by the water, one has the benefit of a breeze.

In Clinton, the only summer breeze was instigated by our ancient, creaky attic fan, which my father insisted on running overnight in order to avoid paying for air-conditioning. Now that I am more or less grown, and understand the difficulty of raising five children on the salary of a newspaperman and a public school teacher, I can forgive him this nightly torture, which inevitably led us to soak our sheets with sweat and caused us, when waking into an August morning, to fear, for a split second, that we had regressed in our teens to bed-wetting.

Growing up, I was convinced that the dog days of eastern North Carolina were the country’s worst, rivaled perhaps by the jungles of the Philippines, wherein I watched Martin Sheen nearly sweat to death in Apocalypse Now. (As we learned later, the film’s shooting was halted after Sheen had a heart attack, a perfectly apt response to the days of the dog.)

But even before I moved full-time to Austin, I might have been the only person alive who ever summered in Texas, which I did for 10 years. Native Texans are more braggarts than complainers; if you mention the heat, they tend to tell you about how long they survived it without air-conditioning. That was, and still is, revelatory to me.

In North Carolina, we might get 10 triple-digit days in a bad spell of high-dog days. Last summer here in Austin, we had 56 days over 100. The average high for September was over 100. “But it’s a dry heat,” people claim when I tell them how hot it gets here, for their notion of Texas is the dusty high plains depicted in Westerns, many of which were actually filmed in Arizona, New Mexico, or California. It is not a dry heat. The average humidity on a July morning is 88 percent, but as the temperature rises, the humidity drops, unlike in North Carolina. By nightfall, the humidity in Austin might be 50 percent, whereas those near-daily afternoon summer storms in North Carolina hold the humidity steady into the darkness.

I have found ways to mitigate the heat here in Texas — blackout curtains, heat-blocking blinds, a straw Stetson to provide some shade on an afternoon walk. Those reflective panels that fit under your windshield? I never leave home without them. I don’t remember ever taking such measures in all my summers in North Carolina. Perhaps it’s the famous resolve that gave us our nickname — our ability to endure unpleasantness as if our heels were tarred — that allows us to get through the dog days.

And, unlike in Texas, we have no problem complaining about the heat in North Carolina. That it is a sensation impossible to accurately describe does not prevent us from trying, sometimes with the characteristic ironic touch that so befuddles non-natives. Many a time, on a North Carolina afternoon so doggish you could, as the legend goes, fry an egg on your sidewalk, I’ve run into a country store to buy a bottle of water and heard the clerk say to the customer ahead of me in line, “Warm out there,” which might be the dictionary definition of understatement. To which the customer always responds with a shrug-like, “Yeah, it is.” No need to say anything else, as the oppressive blanket has been acknowledged, and there’s nothing to do but weather it as best we can.