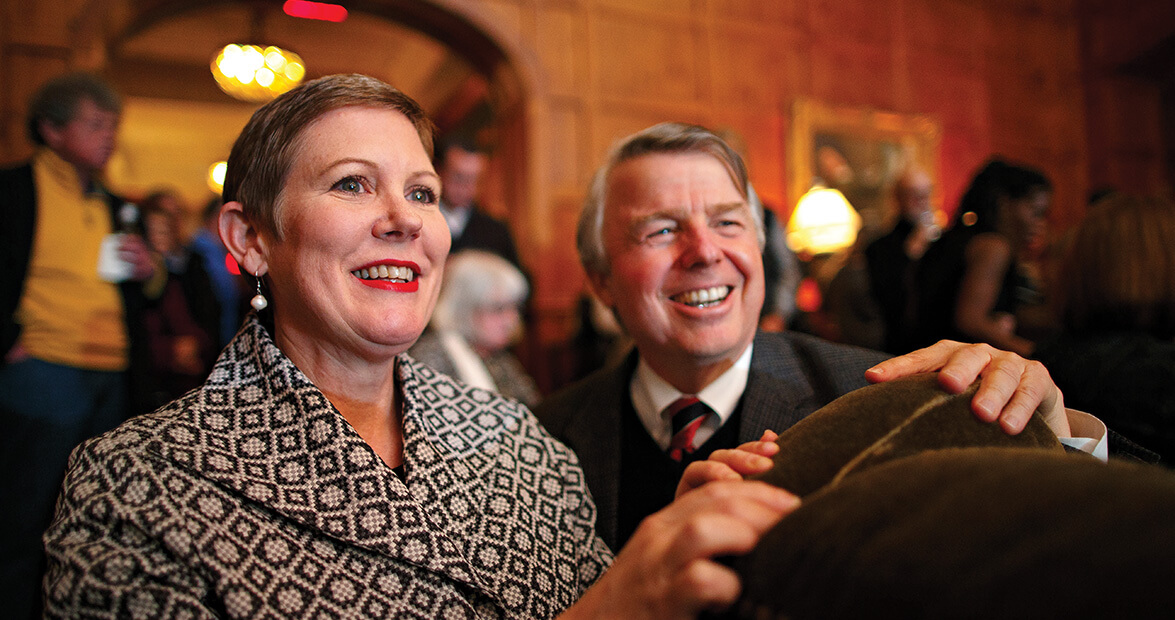 She can’t find him in the high-ceilinged lobby paneled with knotty North Carolina pine. Usually, she listens for his laugh.

But the room’s buzz of conversation is way loud, so she scans the crowd. Nothing. He’s 5 feet 2 inches in his size-5 dress shoes — she’s taller than him by an inch — and he’s lost.

Then, the mass of people parts and she catches a familiar sight: the wrinkling of his eyes when he smiles. She can’t miss that. He smiles with every conversation.

But in a big room bathed in shadow and buttery light, there’s something else she can’t miss. His bangs. Between conversations, he brushes them across his forehead with his fingers, and in the lobby’s soft light, the bangs make him look like a gum-chewing boy on a ball field on a Saturday afternoon.

But it’s jazz night at the O. Henry Hotel, and he’s in his element. As the warm tones of a saxophone, piano, and pitch-perfect soprano fill the room, he greets guests in his blue-gray houndstooth jacket and talks to the many people he knows.

She will, too. This is what they do, Dennis and Nancy Quaintance, husband and wife. This is their hotel, one of two they run in Greensboro. More than 30 years ago, on a train trip through Europe, they knew what they wanted to become: Mr. & Mrs. Hotel-Restaurant-Greensboro.

It’s right before Christmas, 1979. Dennis is 22, a mountain-loving kid from Montana, always comfortable in cowboy boots. He’s running Franklin’s Off Friendly, a restaurant near Guilford College, when he hears that his boss has brought in a local college girl to work during Christmas break.

She’s Nancy King, 20, a Greensboro native and a student at Cornell’s School of Hotel Administration. She meets him at the bar. “Who are you?’’ Dennis barks.

“I don’t have time to talk to you,’’ Dennis responds. All he sees is a rich kid from a rich school — someone so different from himself.

Nancy is a graduate of a local private school. Dennis is a product of a one-room schoolhouse.

At age 15, Dennis wants to do what his dad did: work on cars. But he can’t find a job. So he applies at a restaurant and hotel in his hometown of Missoula, Montana. He’s told that he’s too short to wash dishes, so he winds up cleaning bathrooms and taking out the garbage.

He works hard and moves up quickly. He loves the hospitality business, and after high school, he leapfrogs across the country, working in at least eight hotels and resorts from Seattle, Washington to Palm Beach, Florida. In Greensboro, in a state he’s never visited before, he becomes general manager of a restaurant thanks to a friendship with a man he met in Missoula.

Dennis misses the mountains, and he misses looking across the horizon and seeing for miles. In Greensboro, he can see only for a few blocks, and he hates that. But he loves the people.

But as with any customer-driven business, Dennis runs into headaches. And Nancy is a headache. He blows her off. The next day, she returns. Dennis wonders if she can even do the job. So he puts her to work — in the kitchen, at the bar, and at the front door as a hostess.

One night, when Franklin’s is bustling with diners, Dennis runs smack-dab into her. He stares straight into her emerald-green eyes and asks, “Care to dance?’’

Then she walks away. Dennis stays put, wide-eyed and flustered. 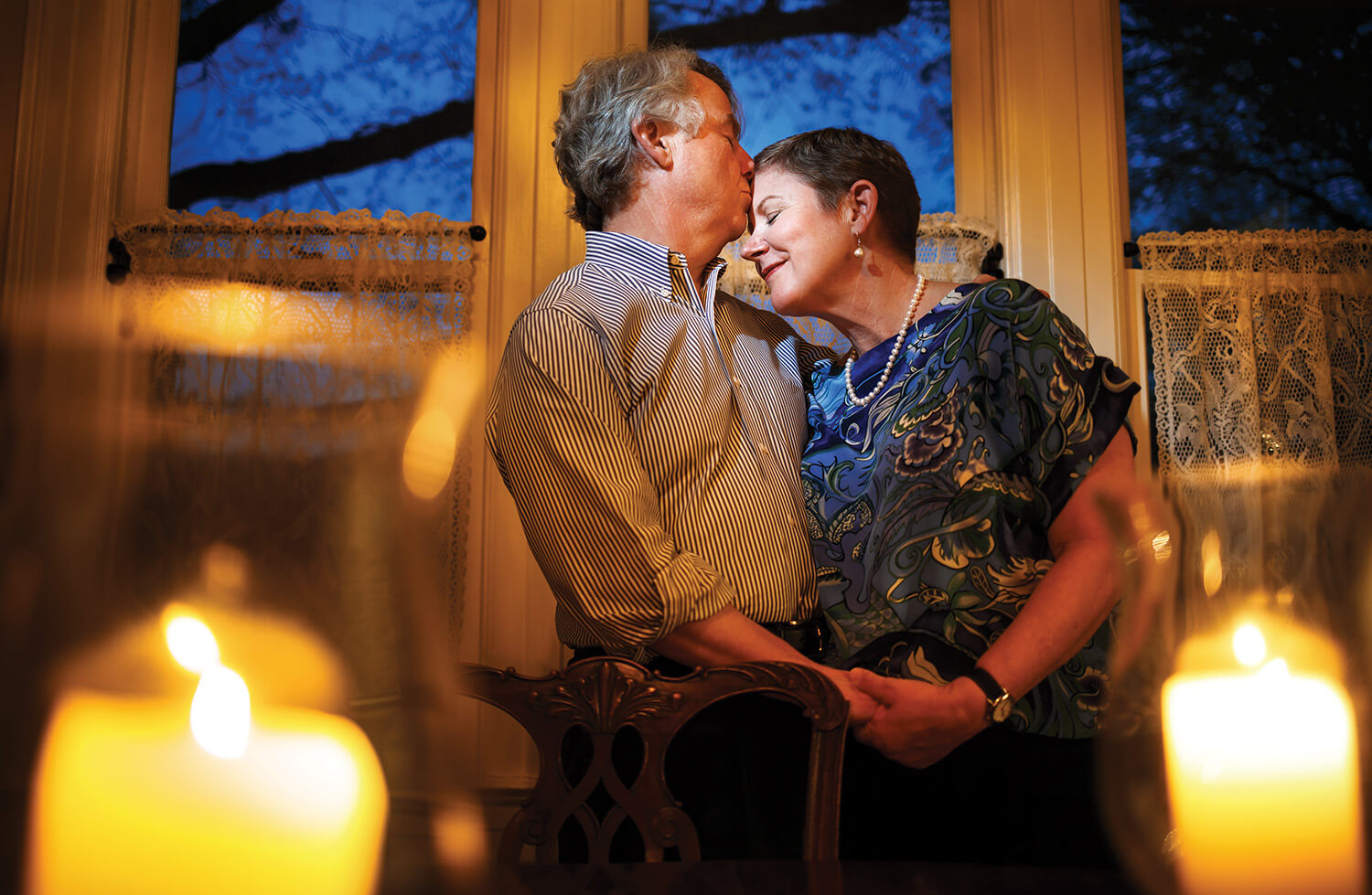 On Nancy’s last night in Greensboro, Dennis asks her out. They eat at a restaurant in downtown Greensboro, go back to his apartment, and sit on his BMW motorcycle parked in his kitchen, drinking wine and eating cheese off a tray propped across the handlebars.

The date lasts seven hours. The next day, Dennis buys Nancy cowboy boots and takes her to a car show at the Greensboro Coliseum. Nancy leaves; Dennis works; questions of the heart persist.

Eighteen months pass. Two friends tell him something that shakes him to the core. “We don’t do this sort of thing,’’ the wife says, “but we don’t want you to miss a lifetime opportunity with someone special.”

“You need to pay more attention to Nancy,’’ the husband interjects. “We think you’re afraid of getting hurt.’’

Indeed Dennis is. He goes to Cornell and watches her work. He sees Nancy — the girl who once picked okra and corn in her grandfather’s garden — become a quick-thinking executive chef shadowed by handsome guys way taller than he is.

Dennis still worries that his heart will get broken. Nancy senses it, and during his visit, she sneaks into his hotel room before daybreak. He tells her what their friends told him. They both start to cry.

Eighteen months after that, Dennis and Nancy marry. Dennis wears a morning suit; Nancy makes her dress out of silk taffeta and antique lace. They get married in First Presbyterian Church in Greensboro, and have a reception nearby with bluegrass, barbecue, and beer kegs.

A year later, on a train slicing through the Alps, during a delayed honeymoon, Dennis pops a different question. “What do we want to do with the rest of our lives?’’ he asks.

They boil down 30 options to three: “Europe,’’ “Barefoot and Pregnant in New Mexico,’’ or “Mr. & Mrs. Hotel-Restaurant-Greensboro.’’

Because they have no paper, Nancy and Dennis write their answers on their palms, then show them to each other: Mr. & Mrs. Hotel-Restaurant-Greensboro.

They hug. They both want the same thing. 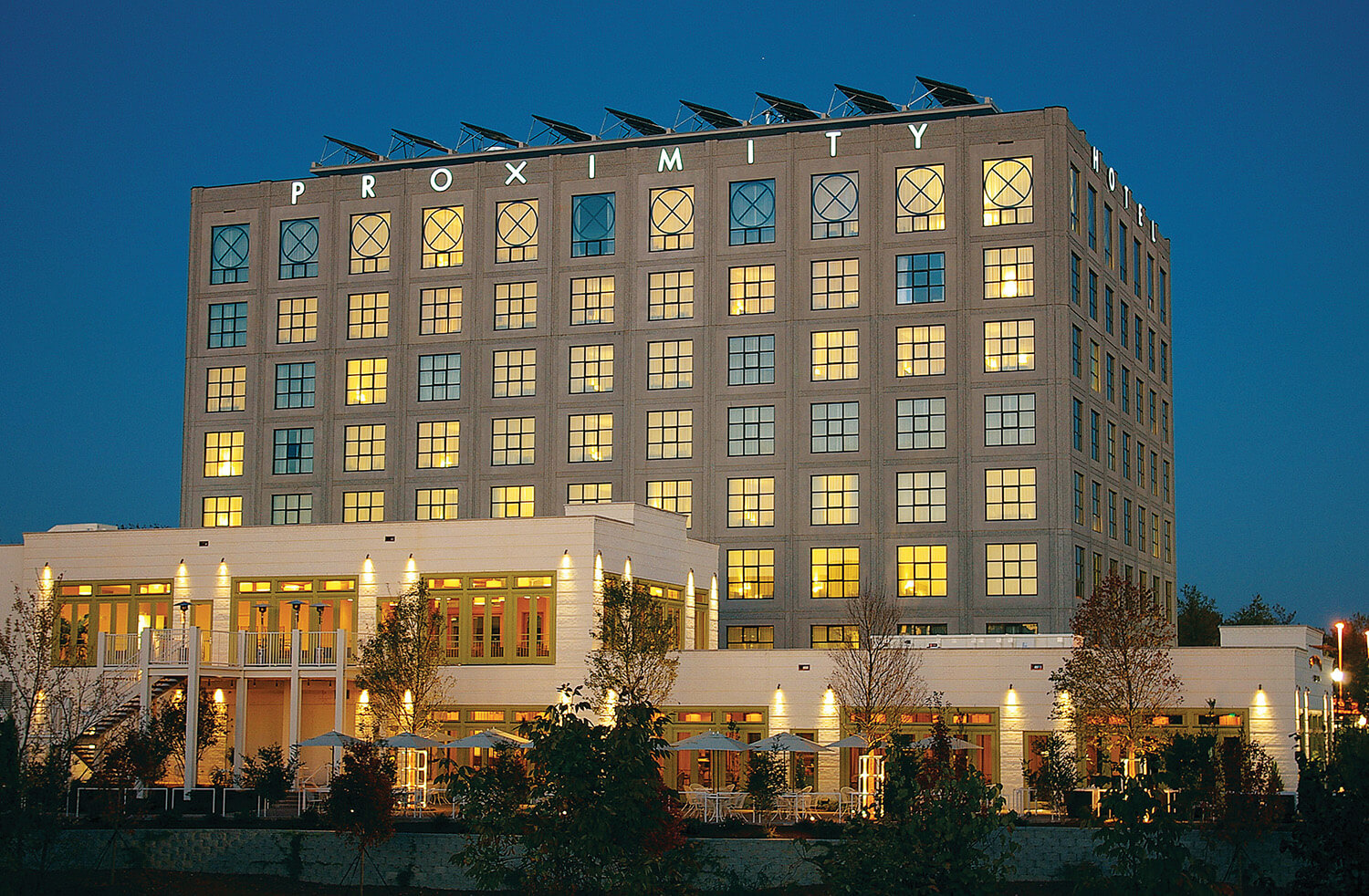 Nancy and Dennis move back to Greensboro from their hospitality jobs in Charlotte. Nancy works at the Marriott, and Dennis oversees five restaurants for a local management group. But like with everything, Dennis dreams big.

He enlists Mike Weaver, a philanthropist and construction company owner, to help him finance opening his first restaurant. Weaver, who met Dennis years before at Franklin’s, later becomes Dennis’s partner. They open a restaurant that bears the race car number Dennis’s dad used, as well as the phrase Dennis mentions always for good luck: Lucky 32.

The restaurant opens in 1989, and three years later, Dennis needs help in developing the flavor and consistency of Lucky’s food. He needs Nancy. As with everything, they talk it out.

“Are we going to get into this and regret it?’’ Nancy asks.

“Boy, I hope not,’’ Dennis responds. “I don’t like nepotism, but that’s not what this is about. We really need your skill set. But we both need to do it in a way that doesn’t goof up the most important relationship of our lives.’’

Nancy joins as a consultant. Later, she becomes a part of the company. Together, Dennis and Nancy open two more Lucky 32 restaurants — in Winston-Salem and Raleigh — and begin thinking about what they wrote on their palms.

But it really started in 1981. Nancy was riding on Dennis’s motorcycle, and he pointed to a tract of land across from a bustling shopping center in Greensboro. “That,” he says, “is where we’ll build our first hotel.”

Seventeen years later, on the very tract of land Dennis pointed to, it happens: the O. Henry, a 131-room hotel named after the city’s famous short-story writer, and patterned after the city’s old O. Henry Hotel. Along with the O. Henry comes the Green Valley Grill. The two businesses become what Dennis likes to call “in and of Greensboro.”

In the lobby, that’s easy to see. Just look up. Every word from “The Gift of the Magi,” the iconic story by O. Henry, is stenciled in gold ink over green paint, ringing the lobby like a Christmas ribbon.

A sweet detail. That’s the beginning.

Dennis and Nancy close the Lucky 32 restaurants in Winston-Salem and Raleigh when the leases are up and focus on the O. Henry. Nearly a decade later, Dennis and Nancy open the Proximity Hotel and its restaurant, Print Works Bistro.

The names hearken back to Greensboro’s cotton fabric legacy, and the 147-room hotel takes its name from one of Greensboro’s old textile mills. Again, Dennis has another big idea.

He puts 100 solar panels on Proximity’s roof and creates North Carolina’s largest solar hot-water system. The system of panels, each of which are 10 feet long and 4 feet wide, can be seen from a half-mile away. Ask Dennis why, and he has an answer: “To consider the perspective of future generations. We sure don’t want our progeny to hate us.’’ Combined with the hotel’s other energy-saving decisions, the Proximity becomes the nation’s first hotel to achieve the highest level of certification from the U.S. Green Building Council.

So it all works: two hotels and three restaurants run by a husband-and-wife team. But how?

In a room full of coworkers, there’s nothing sentimental between the two. And they never kiss at work. Only in his office, with hardly anyone else around, will Dennis let his emotions show when Nancy calls. “Hey, baby,’’ he says.

They’ll question one another in a meeting, and if they can’t give each other their undivided attention, they’ll say, “Let’s take it up later.’’

And they do. But not at home. At their century-old house in Greensboro’s Fisher Park neighborhood, they never talk business. They relax with their twins, Dennis and Kathleen, 16. They go to lunch every Saturday, where they’ll pop off dialogue from the film O Brother, Where Art Thou? They’ll joke when Dennis slips on his favorite T-shirt, which reads There Is No Love Like Hedgehog Love.

But, really, how do Dennis and Nancy make it work? Preston Lane, Dennis’s walking partner, has an idea. “They live and breathe their business, but not in a heartless way,’’ says Lane. “Their business is filled with heart. There is real thought and care in their hotels and restaurants, and it comes from the fact that they care so much for each other. They’re risk-averse, and that keeps them alive, their relationship alive, and their hotels and restaurants alive, as well.’’

It’s late Saturday afternoon at the Proximity, and for an hour, Dennis and Nancy work on setting a table for a private dinner party of 10 people. Dennis circles the table, looking at the crystal knife rests they found on their European honeymoon long ago. He moves them a quarter of an inch. He steps back and looks. He moves them again and circles the table again and again and again. “Whatcha think?’’ he finally asks.

Minutes later, they take a break and talk about themselves. “It’s cliché to say you’d go through the gates of Hell with your soul mate, but that would be true,” Nancy says. “It’s not scary.  When you’re on the path of heart, you don’t look over your shoulder.”

“It’s the equivalent of saying, ‘Let’s  go play!’” Dennis, says. “But when I look back on it, I get philosophical. I remember what [writer] Carlos Castaneda said, that all paths in life are the same. Choose the path with heart, and pursue it impeccably. I’ve found mine.”

Then he points across the restaurant.

“Will you look at that,’’ he says. “Look how that light is coming through the windows. That is just beautiful.’’