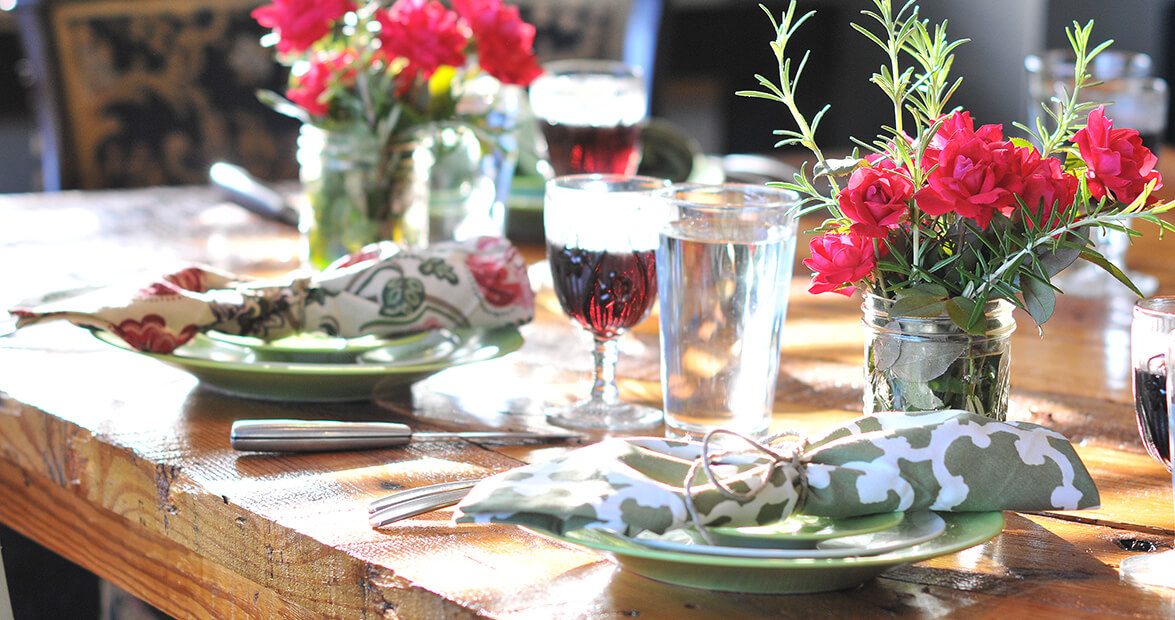 Highland Avenue
883 Highland Avenue Southeast, Hickory • (828) 267-9800 • highlandavenuerestaurant.com
At Highland Avenue, which opened in 2013, diners might be surprised at how the restaurant puts a twist on its dishes, but they can still expect classic comfort from what they eat. Though executive chef Kyle McKnight draws on French techniques and German traditions when drafting the menu, his takes on trout and pork belly are inherently Southern. Always making a point to “buy food from friends,” McKnight develops personal relationships with farmers across the state as he purveys locally sourced food for the restaurant. “We’re fighting the good fight, and we’re trying to do it the right way.”

HomeGrown
371 Merrimon Avenue, Asheville • (828) 232-4340 • slowfoodrightquick.com
At HomeGrown, you don’t simply eat your food. You experience it. Miki Kilpatrick and her husband Greg created the restaurant around the “Slow Food movement” with the hope of encouraging people to take more care with what they eat, even in a fast-paced environment. HomeGrown’s menu is an accessible one, offering comfort food at an affordable price for breakfast, brunch, lunch, and dinner. “Good food shouldn’t be reserved for the fabulously wealthy,” Kilpatrick says. The restaurant is known for its fried chicken, but the vegetable sides change regularly, especially in the summer. “Greens are coming by the half ton, I think,” she jokes.

Heritage Food & Drink
201 West South Main Street, Waxhaw • (704) 843-5236 • heritagefoodanddrink.com
Ask Paul Verica what he’s most looking forward to this summer, and he won’t have to think long about the question. “Tomatoes,” he says without pause. “I’ve missed tomatoes and corn.” As the chef and owner of Heritage Food & Drink, he likes the dishes he creates to revolve around a single star ingredient. Once overshadowed by the Charlotte food scene, Waxhaw has come into its own as a culinary destination with the help of Heritage. The restaurant has a modern approach to cuisine and highlights a variety of textures and sauces in its food, while still keeping it local. Two of the restaurant’s main suppliers are within 10 miles of the restaurant.

Piedmont
401 Foster Street, Durham • (919) 683-1213 • piedmontrestaurant.com
Sustainability is what’s key to Piedmont’s executive chef Greg Gettles. “I’ve never understood why you wouldn’t take advantage of what’s available to you,” he says. Gettles, who joined Piedmont earlier in June, is excited to take advantage of summer’s bounty by using vegetables as much as possible in the dishes he prepares. “I think that we forget as chefs and cooks that produce is unbelievable,” he says. “We are so fortunate to have what we have.” Gettles will certainly have his pick of vegetables to work with this summer. The owners of Piedmont, Richard Holcomb and Jamie DeMent, also own Coon Rock Farm on the Eno River, which has more than 10 acres of gardens, orchards, and ponds. 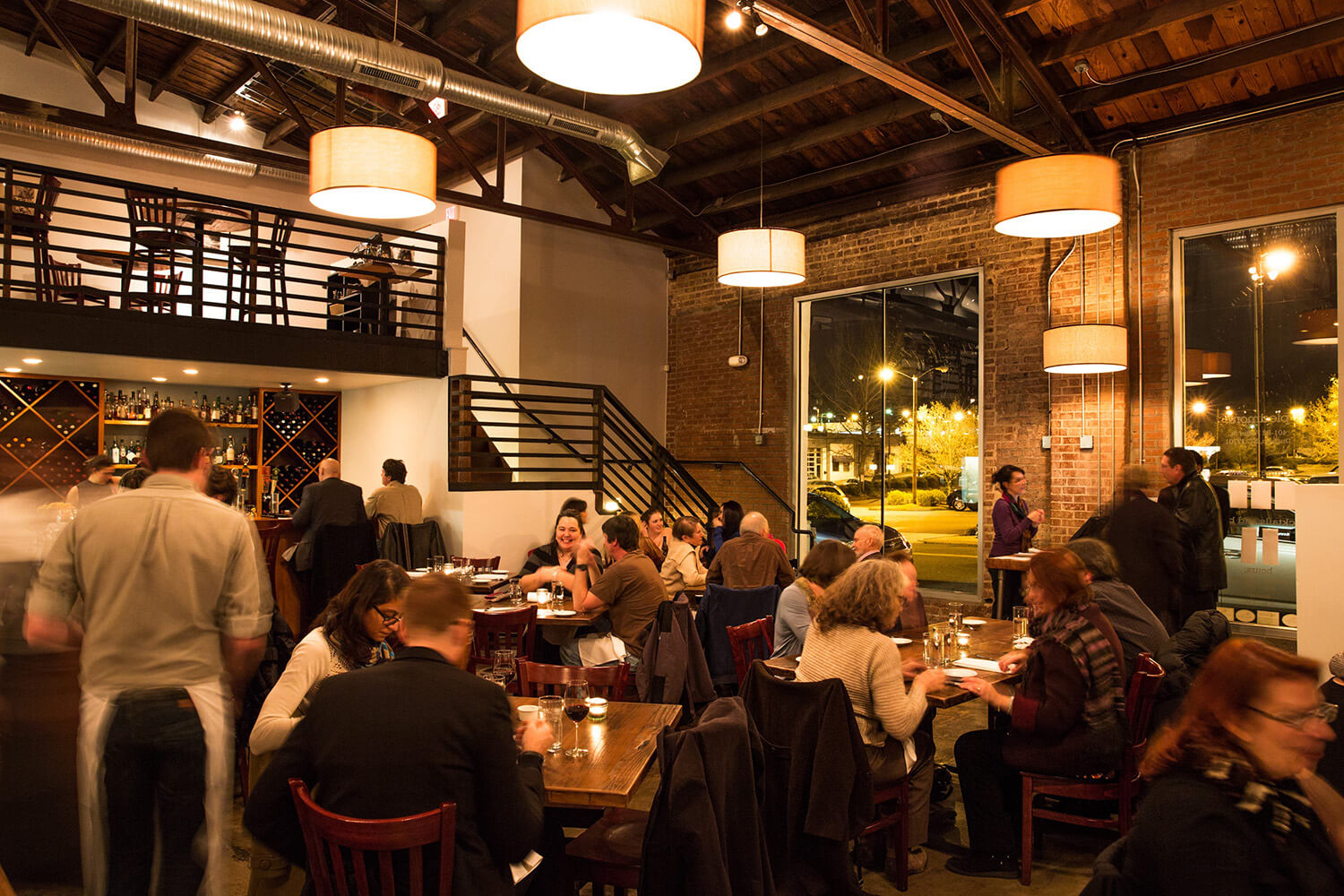 Photograph courtesy of Piedmont photograph by and Food

SoCo Farm and Food
6538 Slabtown Road, Wilson • (252) 363-3716 • soconc.com
SoCo, which stands for Southern Comfort, is about as hands-on with its food as a restaurant can get. In addition to raising and processing animals itself, SoCo harvests its own honey and has a large farm on the same property as the restaurant. “We have 25 different kinds heirloom tomatoes that are growing organically on the farm,” says manager and owner Kimberly Kulers. “I got a little out of control,” she admits with a laugh. Right now, much of the menu incorporates squash, zucchini, and heirloom beans, but come August, it’ll rely more on pears and figs. Those who make the trip out to Wilson for a one-of-a-kind dining experience can walk around the gardens and pet the farm’s horses before dining on a prix fixe four-course menu in the dining room, which is housed within an 80-year-old tobacco barn, or at the chef’s table.

Spoon River Artworks and Market
263 Pamlico Street, Belhaven • (252) 945-3899 • facebook.com/spoonriverartworksmarket
Married to a flower farmer, Teresa VanStaalduinen doesn’t treat farm-to-table as a trend. “It’s not a cliché movement,” the Spoon River owner says. “It’s actually our lives.” Less than a block away from Belhaven’s marina, Spoon River has great access to fresh seafood, no doubt, but there are other ways the restaurant ensures that its food is locally sourced. There’s even a patio out back that the restaurant uses to grow the majority of its herbs. Now that eggplant is in season, don’t miss Spoon River’s Eggplant Parmesan. Chef Jeremy Ebert says the addition of coconut broth elevates the dish in a surprising way, as does the house-made pesto and roasted tomatoes.