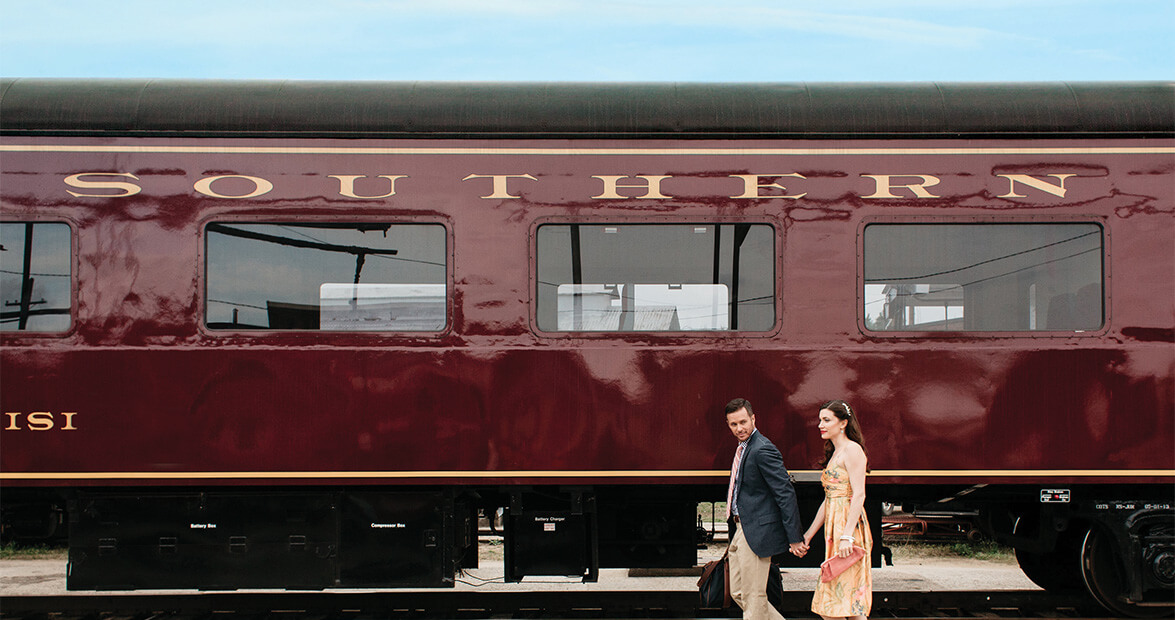 You’ve seen train stations in old movies: those settings of joyful greetings and tearful goodbyes and mysterious characters disappearing into the rising steam and floating smoke on the platform at night. Train stations made ideal places for drama, and that’s reflected in their architecture. For cities large and small, train stations were integral parts of their identities — from the diminutive, barnlike platforms at rural crossroads like Norlina and Newell, to the archways, towers, and columns in cities like Charlotte and Greensboro. Plain and functional or grand and ornate, tidy or down-at-the-heels, train stations gave travelers their first and sometimes only impression of the cities they served.

North Carolina had few of the great granite behemoths of the busy Northeastern cities. Here, there were no Grand Central or Union stations. Tar Heel depots were more understated, but still distinctive. In the western part of the state along the Southern Railway line, the Spanish Mission style, with its ceramic red-tile roofs, arched windows, and brick towers serving as a beacon for lost travelers, proved popular. The Atlantic Coast Line was a fan of red brick. Along the Seaboard Air Line in the Piedmont and Sandhills, the stations varied in style.

For the first half of the 20th century, these stations were civic stalwarts, where communities gathered to meet the rest of the world. And then, all of a sudden, the stations were derelict. North Carolinians, like most Americans, had a new love affair: the highway. For years, the stations that had escaped the bulldozer stood as crumbling and cracking reminders of a forgotten past, boarded up along with the rest of our downtowns as we sought the freedom of cars and the ease of the shopping mall. Who needed the cooling breezes blowing through the archways at the Salisbury station? You had air-conditioning. Who needed the graceful awnings and the witch’s-hat roof at Hamlet’s old transfer depot? You weren’t going to spend much time outside anyway.

A few years back, something happened. As new generations looked on these stations with fresh eyes, the buildings crossed the threshold from “old” to “historic.” From something to discard, to something to preserve. It was too late for many — Charlotte and Asheville and many smaller towns had demolished many of their stations long ago. But for those that remained, the hard work of restoration began. And though the North Carolina Transportation Museum in Spencer is still the main attraction for Tar Heel railway history enthusiasts, other towns are using their depots to connect to their railway pasts.

In Salisbury, where eight passenger trains a day still stop, and 60 freight trains pass through, the Spanish Mission-style depot built in 1908 serves as a wedding and party venue. In Fayetteville, the station serves as a hub for artifact-filled history exhibits, a city market for farmers and crafters, and the starting point for bus tours of historic sites in Cumberland County. Even cities with no passenger rail service have renovated their railroad buildings into community centers. The 1887 Atlantic Coast Line freight warehouse in Wilmington, now the Wilmington Railroad Museum, sits adjacent to the Riverwalk, next to a new convention center.

What once was old is new again.

This story appeared in print as “Grand Stations.”