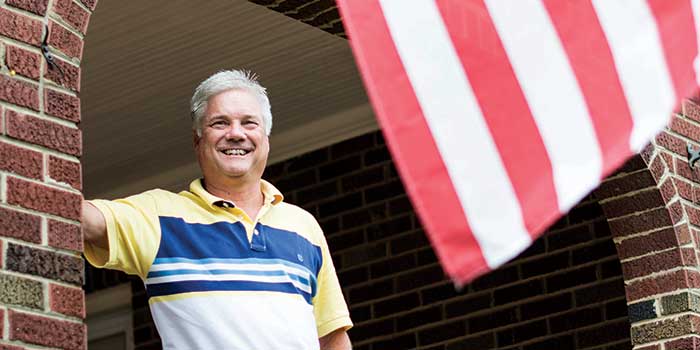 A blue bow hangs on the wrought iron fence outside the Village Restaurant. The ribbon barely flaps as cars creep by on Main Street in downtown Denton. Inside, next to the cash register, sits a picture frame. It holds a photo of a newborn baby boy with a scrunched face.

His grandmother owns this place. And the majority of her customers know everything about her family. Or take pride in thinking they do. So before Amanda Cagle left town this morning to go see her new grandson, she took time to introduce him. She knew they’d be asking about him.

How much does he weigh? Who does he look like? How’s his mama?

As soon as this little guy entered the world, the people of Denton were rooting for him.

How’s that grandbaby? How tall’s he getting? What grade’s he in?

Even if Amanda Cagle’s grandson never leaves the big city of Charlotte where he was born and never travels 56 miles east to the tiny town of Denton, he’s a part of this place. He has roots here. Denton residents will know him and his struggles and his accomplishments. They’ll keep up with who he’s dating and what sport he’s playing and where he wants to go to school. And if he ever does set foot in Denton, someone will say, Aren’t you Amanda Cagle’s grandson? I’ve known you since you were born.

On a recent Tuesday, I leave my apartment in the big city of Charlotte and drive 56 miles east to the tiny town of Denton in southern Davidson County. I walk into the Village for lunch. It’s noon. And it’s crowded.

As I make my way to a table, one of the teachers speaks to me. Before she even calls out my name, she says, “You look just like your mama.” She went to high school with my mom. And although she doesn’t see either of us often, she asks about me and the stories I’m working on.

She knows more about me than I ever would have thought.

I grew up with a Denton address. But I never lived in Denton. I didn’t even live in Davidson County. I was raised on a family farm in the rural community of Jackson Creek in Randolph, the neighboring county to the east.

Although the people of Jackson Creek don’t claim to be Denton residents, they depend on Denton for many things. Denton gives them the staples: a post office, a bank, a grocery store, a gas station, a hardware store, a drugstore, a family doctor, and a few restaurants to choose from. It also gives them a place to congregate — on the bench outside the Old Country Store, or around the breakfast table at the Village or Rick’s Restaurant, or beside the counter at Kountry Korner Hardware. People come to Denton to socialize as much as they come to do business.

Denton is small. Only 1,640 people live inside the town limits. But it serves a wide area. People from rural communities like Jackson Creek and Eldorado and Farmer and Silver Valley and New Hope need a town. So Denton adopts them.

Scott Morris has been the mayor of Denton for the past 10 years. He was a town commissioner before that. The first year he ran for local office, his uncle beat him out by eight votes. His father, Joe, was on the town council back in the ’60s. If anything happens to Morris and he can’t fulfill his mayoral duties, his brother, Andy, will step in. He’s the mayor pro tem. The town of Denton means a lot to Morris men.

Scott Morris lives within a block of where he grew up on Salisbury Street. He joined the fire department 35 years ago, saw how things worked in the town, and was hooked. When asked if he ever wanted to leave, he says, “No, not really,” with a look that suggests he never considered it.

“People migrate back to Denton,” he says. “They go to Charlotte or Greensboro, but they come back here to raise a family.”

Morris says Denton is looking for its niche.

Once, Denton was supposed to be big.

J.M. Daniel and B.I. Harrison founded the town in 1907. In the decades that followed, Denton became known for manufacturing railroad crossties. Furniture and hosiery mills then grew to support the town. In the mid-1960s, Klopman Mills, later purchased by Burlington Industries, began construction of a $7.5 million plant just east of town.

“Little Denton Is Boom Town,” read a headline in The High Point Enterprise on April 24, 1966. “Klopman has big things in mind for this lower Davidson County plant. … Denton is a booming little town and if all goes well, it soon will be a booming big town.”

The plant employed 1,200 people. Then it closed in 1997. It’s now a big pile of rubble. Denton is down to one furniture company; a couple of small hosiery mills; and a few manufacturers that make equipment implements, such as hitches and buckets for tractors. Like many Piedmont towns, it’s trying to make the best out of what it has left.

At Kountry Korner Hardware, in the middle of Denton’s downtown, Bobby Talbert says his business is better than it has been. He acknowledges Denton’s struggles, but he’s quick to mention the small businesses it maintains.

“Little businesses are better for me than when Burlington was here,” Talbert says. Larger companies often buy from corporate sources, but locally owned places tend to support each other.

“My wife often wants to go out of town to eat,” Talbert says. “But I tell her as much money as the restaurants here spend with me, I can’t afford to eat anywhere else.”

Talbert is 73 years old, and he’s had a store here on the corner of Main and Salisbury streets for 36 years. Like Morris, he’s Denton through and through. He graduated from Denton High School, the predecessor of the current South Davidson High, in 1959. His voice rang out as the football announcer every Friday night for 30 seasons.

Talbert grew up six miles south of Denton at the intersection of N.C. highways 49 and 109. He lives inside the town limits now, but he still owns the house where he was raised. He calls it his country home. It’s a good garden spot, he says.

A few years ago, after his mother died, he was cleaning out her things and found a letter his father sent to her from Fort Bragg. Talbert never met his father, who died of a brain tumor at age 21. Talbert was 5 weeks old.

“I was almost 70 years old and hadn’t seen my daddy’s handwriting,” Talbert says.

He keeps the letter in his pickup truck and shows it every chance he gets. It’s in the original envelope. On the outside, in uneven cursive, it reads: “Miss Mary Lanier, Denton N.C.” That’s it. No address.

The letter made it from Fayetteville, where Talbert’s father was stationed, to Denton, where Talbert’s mother was waiting, with no numbers. That was in 1938. The letter would likely never make it through our postal system today with neither house number nor ZIP code. But if it were to slip through, Denton is still small enough that it could probably find its way to its rightful owner.

Where a town eats, its people meet

Every small town has its locally owned restaurant where people gather for breakfast each morning. The same people. At the same tables. Every day.

Rick’s Restaurant is on N.C. Highway 109, known around town as “the highway.” The Village Restaurant is in downtown. Six-tenths of a mile separates them. They’re both locally owned. And they both do home cooking: fried fish and coleslaw, pinto beans and corn bread.

Some customers maintain a loyalty to one. Others switch back and forth. And then there are the people who follow the specials, particularly chicken pie. Rick’s serves it on Tuesdays, the Village on Fridays. Rick’s rounds it out with fried apple pies, made by the owner’s mother. The Village finishes with strawberry cobbler.

Both restaurants also try to branch out, to offer customers some of the more creative dishes that they might find in a bigger city. One night Rick’s puts a few Mexican-themed items on the menu. The Village has a list of salads with homemade dressings.

I have fond memories of both places.

As a kid, I helped my father in the summertime. He’s a farmer. We mowed hay and built fences and planted corn. He did most of the mowing and building and planting. I mainly rode and watched. I remember one particular day we spent in the hayfield. When lunchtime rolled around, he suggested we head to Denton.

I hopped in the truck, and we drove nine miles to Rick’s. I sat with him in the booth and ordered a cheeseburger that seemed as big as my head. And we ate.

My favorite memory from the Village occurred about this time of year. My family — mom, dad, sister, aunts, uncles, cousins, grandparents — decided to head over to Denton one Friday night for the Country Christmas Train.

The Denton FarmPark — known across the Southeast for its antique tractor show on the Fourth of July — holds the event in November and December. The staff pulls out the old train, loads it with guests, and circles it around the park decorated with Christmas lights. They have carolers singing and ornaments for sale and Santa with a welcoming lap.

The night we went it was snowing. It was a typical “winter-weather event” in the South. Stores were closed. No one, except us, was on the road. The Village was the lone restaurant open for supper.

We were the only ones in the restaurant. We crowded around the big table where the old men gather for breakfast. We laughed at ourselves for being out on such a cold, messy night. We ordered big plates of fried flounder and hush puppies. And we ate.

I think about that night as I sit at the Village eating my lunch. It’s busy today. Customers struggle to find a seat. Waitresses barely keep up.

I ask Jennifer Gallimore, the owner’s daughter, if she and her mother ever considered expanding.

“People say we should make it bigger,” she says, “but it wouldn’t be the same. Part of the Village is that it’s small. I like it the way it is.”

What the Locals Know

Troutman’s Bar-B-Que
If you grew up on Lexington-style barbecue, Troutman’s won’t disappoint. The pork is wood-smoked and comes with hush puppies to sop up your sauce. If you’re in a hurry, take advantage of the curb service and you’ll never have to leave your car. 18466 N.C. Highway 109 South. (336) 859-2206.

The Denton Orator
Stan Bingham started the weekly paper in 1995. “The newspaper, especially in Denton, is the lifeblood of the town,” Bingham says. The office, located in the middle of downtown, is housed in a restored bank building. Step inside, pick up a paper, and admire the paintings by local artists that adorn the walls. 2 North Main Street. (336) 859-3131 or dentonorator.com.

Leah Hughes is a graduate of UNC-Chapel Hill and a freelance writer in Charlotte. She makes her way back to Denton for an ice cream cone at the Old Country Store as often as she can. Her most recent story for Our State was “Right Side Up” (August 2013).