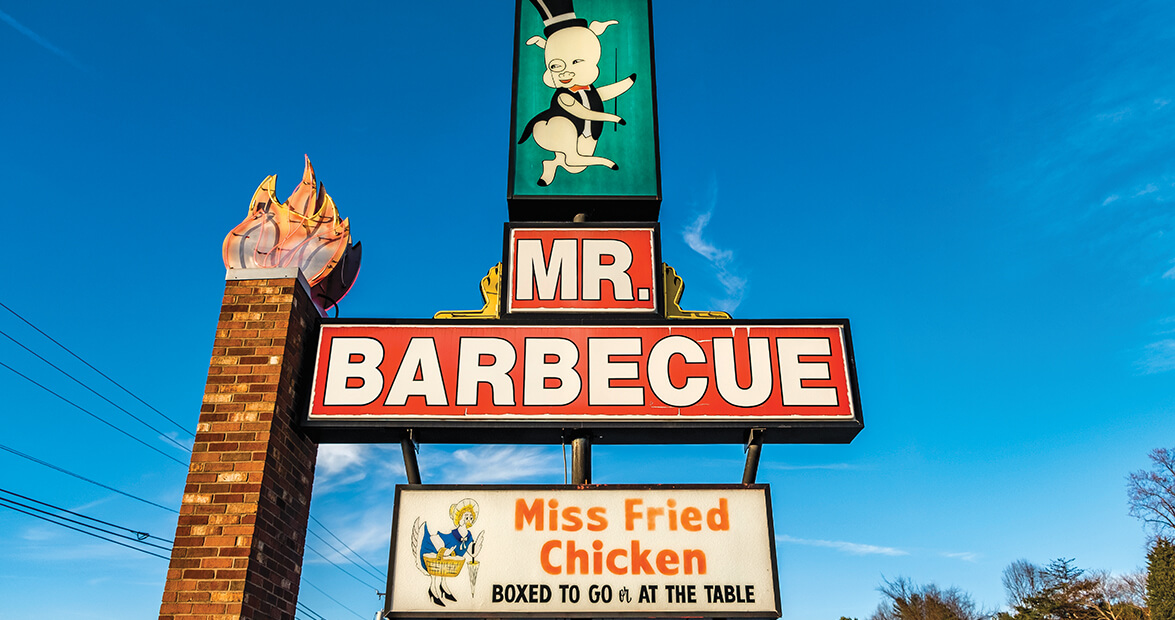 Larry Dennis comes from a long and distinguished line of eastern North Carolina barbecue men. Not surprisingly, he takes his pitmaster duties seriously. Now in charge of Bum’s — the Ayden barbecue joint his father opened in 1968 — the 53-year-old Dennis typically arrives at the restaurant’s smokehouse at 4 in the morning and often doesn’t go home until 10 at night. “I put on, cook, and chop up every pig we sell,” he boasts.

But over the years, Dennis has noticed something a bit odd. While barbecue is Bum’s signature dish — and its best seller — it’s not the one he hears about the most from his customers. “We get more comments on our fried chicken than everything else on our menu put together,” Dennis says of Bum’s yardbird, a delectable dish that achieves the crisp-on-the-outside-and-moist-on-the-inside Platonic ideal. “The barbecue, the Brunswick stew, the collards are all kind of expected,” he continues. “But when they eat the fried chicken, they’re shocked to taste something this good.”

It’s a useful, albeit counterintuitive, bit of wisdom: If you’re seeking great Southern fried chicken, it often pays to look for a restaurant with a picture of a pig in its window. At some of the state’s best barbecue restaurants, fried chicken isn’t treated as an afterthought. Instead, it’s an integral part of the menu — given just as much consideration (if not as much cooking time) and subject to just as much debate as the barbecue itself. “I don’t think we just have the best barbecue,” says Eric Lippard, one of the co-owners of Parker’s Barbecue in Wilson. “We’ve got the best fried chicken, too.”

If you’re seeking great Southern fried chicken, it often pays to look for a restaurant with a picture of a pig in its window.

At Parker’s — the shambling, white clapboard temple to barbecue on U.S. Highway 301 — they dredge the 8,000 to 10,000 eight-piece chickens they serve each week in the same basic breading recipe that the late Ralph Parker came up with in 1946: salt, pepper, and white flour from Atkinson Milling Company in Selma. June Brunson, an 80-year-old cook who’s been working in Parker’s kitchen since he was 14, says that after the chicken is dredged, it must rest on a tray for up to 20 minutes. “You need to let it sit,” Brunson explains, “because you can’t fry dry flour.” But that’s only half of the story: Brunson believes the real secret to Parker’s delicious fried chicken is the cottonseed oil it’s fried in, which produces chicken so miraculously grease-free that, after you eat it, you can use the same napkin to wipe your mouth and your fingers.

At Ralph’s, the cavernous barbecue hall just off I-95 near Roanoke Rapids, the ingredient that sets its fried chicken apart is even more basic: water. “Wet batter chicken is our thing,” says Gavin Woodruff, who, along with his mother, currently runs the restaurant his great-grandfather Ralph Woodruff founded in 1941. The fried chicken cooks at Ralph’s, a pair of women who’ve been working at the restaurant for more than 30 years, mix up flour and salt — no pepper — and then add water. How much water? They don’t really know exactly. “Ms. Alice and Ms. Sally just eyeball the amount,” Woodruff says. The result is fried chicken encased in a golden, puffy crust that calls to mind tempura.

Water also plays a crucial role in the fried chicken at Clyde Cooper’s in Raleigh. When Randy Holt and his wife, Debbie, bought the venerable downtown barbecue joint, they were more focused on serving pork. But then they changed poultry suppliers and discovered the wonders of brining. Soaking their birds in a saltwater mixture produces fried chicken that’s explosively juicy. It’s popular, too: The restaurant now sells almost equal amounts of barbecue and fried chicken, sometimes going through as much as 20,000 pounds of poultry in one week. “Fried chicken is not something we set out to be known for,” Holt marvels, “but now we’re known for it.”

The fried chicken at Picnic — a new “craft” barbecue restaurant in Durham — was such an immediate success that in the first few months the owners doubled the number of deep fryers from two to four. That may be because, unlike its forefathers, Picnic dresses up its bird. The breading is a combination of all-purpose flour and rice flour, which gives the skin “a little extra crispiness,” says Chef Ben Adams. But before that, these birds are soaked in a brine and then bathed in cold-smoked buttermilk, ensuring a “smokier, meatier flavor.” It’s the sort of thing that barbecue folks are known for: taking the time to coax extraordinary flavors from ordinary cuts of meat. And yet, for all the differences and variations in preparation — wet batter versus dry, canola oil versus cottonseed, and even the addition of something as newfangled as smoked buttermilk — fried chicken, like North Carolina barbecue, remains an elementally simple dish.

“There’s no big secret to making good barbecue: You cook the pigs with wood, and you use vinegar and salt and pepper,” says Dennis of Bum’s. “It’s the same thing with chicken: salt, pepper, flour. Batter it, fry it, eat it. There’s no magic to it.” You try to protest, but he won’t have it. Fried chicken, like barbecue, is supposed to be that delicious, he says; the problems come when people forget their roots and start getting away from their traditions. “The hardest part of my job,” Dennis says, “is keeping things simple and the way they’re meant to be.”