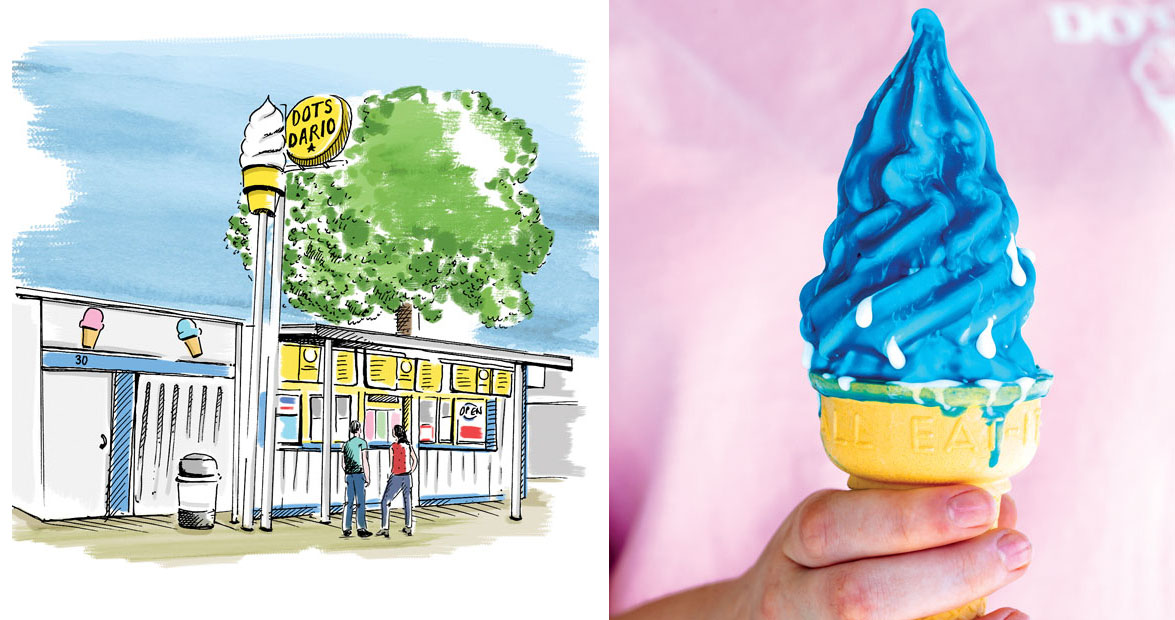 After the shadow from the last shade tree dissolves into dusk, and the reflections of highway headlights appear in the take-out window, the phone starts to ring at Dots Dario.

“How late are you open?” callers want to know.

The answer is always the same: “How far away are you?”

That question and reply tells you all you need to know about this ice cream stand in the Blue Ridge foothills: Its treats are so loved that people call for them in desperation, and its employees are so devoted that they’ll keep the lights on for the last soft-serve-craving straggler.

For nearly 50 years, a trip to Dots has been a summer standby, a promise kept by parents to many a sun-weary child. Fitting, then, that the place itself started with a promise: Founder Charlie McMahan vowed to his wife, Dottie, that he would one day put her name in lights. In 1970, new to retirement, he made good on that pledge.
He pulled a single-wide trailer onto the lot beside his Blue Ridge Welding Shop, near the junction of highways 70 and 80. The trailer had two windows up front for ordering and serving. Then, McMahan hoisted a giant fiberglass ice cream cone on a pole out front. The “Dots Dario” sign went up next — an illuminated, sunflower-yellow nameplate.

People still tell the origin story of Dots Dario. David Ditt, who has co-owned Dots with business partner Jennings Smith since 1987, prefers to share a different tale: the story of what happened later to that lighted sign. Ditt kept the original Dots Dario sign burning for 17 years. The lights went out, he swears, on October 9, 2003, the day Charlie McMahan died. And they never worked again.

The original fiberglass ice cream cone is still there. It fell and shattered a few years back, but Ditt glued it back together again, “just like Humpty Dumpty,” he says. (A much happier ending than for poor Mr. Dumpty.) Ditt felt an obligation to save it: He thinks it might be one of the most photographed sights in western North Carolina.

Leslie Owenby McPeters knows the landmark well. She grew up in a family that took the old road — U.S. 70 — on the way home from Asheville. It makes for an hour-long drive down the mountain. But Marion families know you have to plan for an hour-and-a-half trip, what with the indispensable stop for ice cream at Dots.

As a teenager, McPeters lingered at the stand for a cone of strawberry cheesecake ice cream and cute boy sightings. To earn money in college, she became a Dots Girl. That’s how Janice Painter, manager for 35 years, refers to her teenage staffers — those who start calling in January to secure a summer gig behind the celebrated windows.

For McPeters, the job was like peeking behind the wizard’s curtain in Oz, except that it wasn’t a disappointment: During her summer stint, she perfected the soft-serve swirl, a bit of magic that she now uses to impress her 12-year-old daughter, Macy. All the scooping gave her a weight lifter’s right bicep. Today, when McPeters takes Interstate 40 from Wake Forest to Marion, Macy can expect a side trip down the old road for a milkshake and her mom’s memories.

Dario fans turn nostalgic over the yellow glow cast beneath the awning come nightfall. After all her years watching the summer crowd wax and wane, Painter understands the sentiment. “It still feels like you’re coming home,” she says. “Finding that piece of life that you cannot find anywhere else in this world.”

The bulbs in the Dots sign don’t burn anymore, and there are cracks in the iconic cone. It’s all part of the place, as much as the chocolate-dipped soft-serve or mint chocolate chip. And if you grew up trying to make it to Dots before closing, you remember the question: How far away are you? The answer is easy: You’re never far away at all.