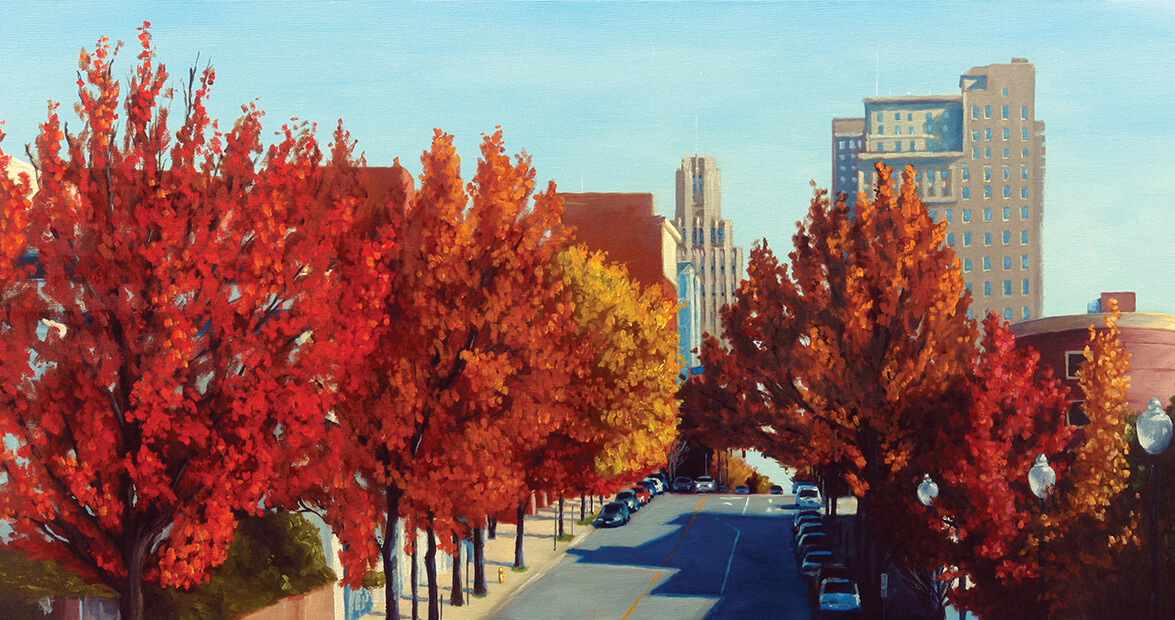 If Douglas Hoover walks in downtown Winston-Salem, any scene he sees could become a painting. A man typing on his laptop at a coffee shop; the skyline decorated with patches of clouds. And if he travels to the coast, there’s just as much inspiration: a seagull perched on a ferryboat; a man clamming in knee-deep water.

Hoover, an artist specializing in oil painting, grew up in North Carolina, and says his home state is full of inspiration. And his paintings prove that. Nearly all of them come from things Hoover has seen while traveling around the state.

“No matter where you’re from, there’s something about home,” he says. “The scenery around here really invokes something.”

After a 20-year career in advertising, Hoover decided to make painting his full-time job about eight years ago. The coast was his favorite place to travel, so he began building a portfolio of coastal paintings and approached galleries to display his work. After expanding his presence in coastal galleries, he began moving inland and now categorizes his paintings as “coastal” or “urban.”

And he doesn’t only paint scenes that inspire him. If you want a painting of two Siamese cats sitting on a windowsill, looking into the harbor, he can paint that on commission.

A room in his Archdale studio is filled with works that he took to a recent show. Sketches of some of the paintings sit among them. And, to his surprise, people want to buy those, too.

He says it’s because there’s something about seeing where the inspiration originates. Buyers love to see the charcoal lines, the earliest formation of what would turn into a painting, like that of a downtown skyline at night.

But, if you wanted, you could drive out to Winston-Salem, and find the spot where Hoover stood when the full moon was off to the left of the Winston Tower, a bare tree to the right. If you found that spot you’d see the inspiration in it, just like Douglas Hoover.