Kelly Epperson and his dad, Ralph, face each other across a short span of Mount Airy sidewalk. Ralph died 15 years ago, but a statue on a downtown street resurrects the local radio personality in brick, capturing him in his element: In his left hand, he holds a microphone from WPAQ, the station that’s sent live music out to the world since the 1940s, presenting North Carolina folk and bluegrass legends like Doc Watson and Earl Scruggs, as well as recordings by Mount Airy native Andy Griffith. Ralph is one of eight characters depicted on The Whittling Wall, an ambitious outdoor sculpture that commemorates some of Surry County’s everyday folk heroes. 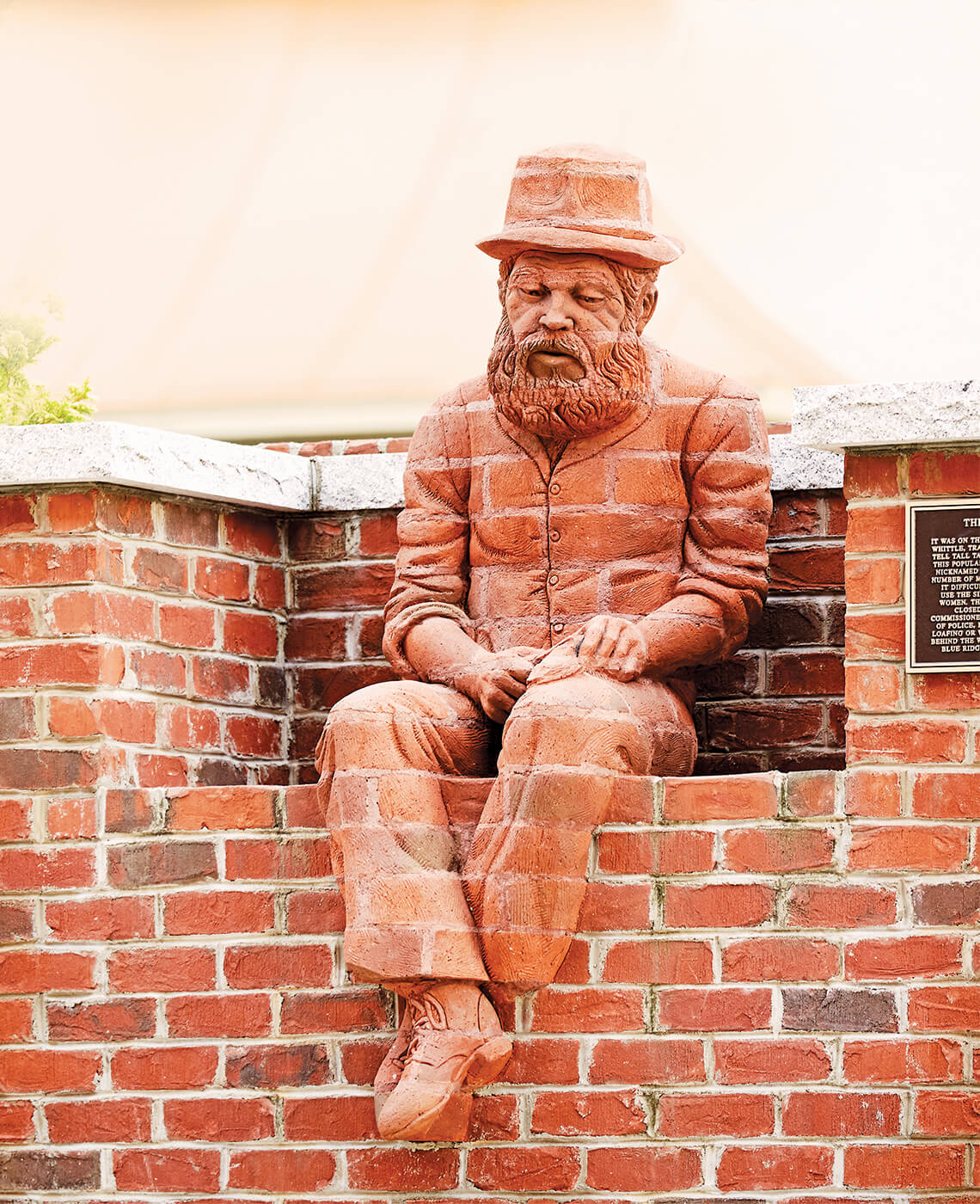 Other people immortalized on The Whittling Wall made sewing machines hum and fiddles cry. One imparted wisdom to generations of Black schoolchildren, while another kept townspeople well dressed in the finest tailored suits. One chewed tobacco, ran his mouth, and whittled sticks with a pocketknife; when the light’s just right, you can almost see the wood shavings and tobacco juice.

Ralph shares his nook on the wall with a couple of Surry County old-time musicians from the nearby rolling hills that stretch from the Sauratown Mountains north of Winston-Salem to the eastern edge of the Blue Ridge Mountains. “This is the heartbeat of old-time music in this area,” Kelly says, nodding to the sculpted trio in front of him.

The Whittling Wall rolls down Oak Street from Mount Airy’s central business district, which caps a ridge above the Ararat River. The soul of a city materializes in the brickwork: a mix of real people and archetypes that celebrate a past steeped in music and mill work — and a present in which tourists flock to the bustling downtown in search of the mythical Mayberry of 1960s television sitcom The Andy Griffith Show. But while Mount Airy has long capitalized on Griffith’s show, The Whittling Wall looks beyond TV nostalgia to reveal a broader, more authentic view of the town.

“When I was growing up here, there wasn’t much public art to be found,” says Lizzie Morrison, a painter with an art degree from Auburn University, who also happens to be the Main Street coordinator for Mount Airy Downtown, Inc. “I hope that this art in our shared spaces encourages creative people to lean into their talent. It’s easy for young people to feel especially small in this chaotic world when they live in rural America.”

Morrison is one of two artists who put their heads together to build the wall. The other is Brad Spencer, a nationally renowned sculptor who crafted The Whittling Wall’s human figures in his Reidsville studio before laying the bricks and mortar on-site. Spencer’s portfolio also includes a Doc and Merle Watson wall at Wilkes Community College in Wilkesboro, as well as projects in other cities across the country. Morrison’s organization couldn’t afford to hire the artist immediately, so she worked on raising funds, eventually landing a $94,340 downtown revitalization grant from the NC Department of Commerce. She assumed that city commissioners would insist on investing in something practical, like parking. “But we pitched this project to them, and they said, ‘Let’s do it.’” 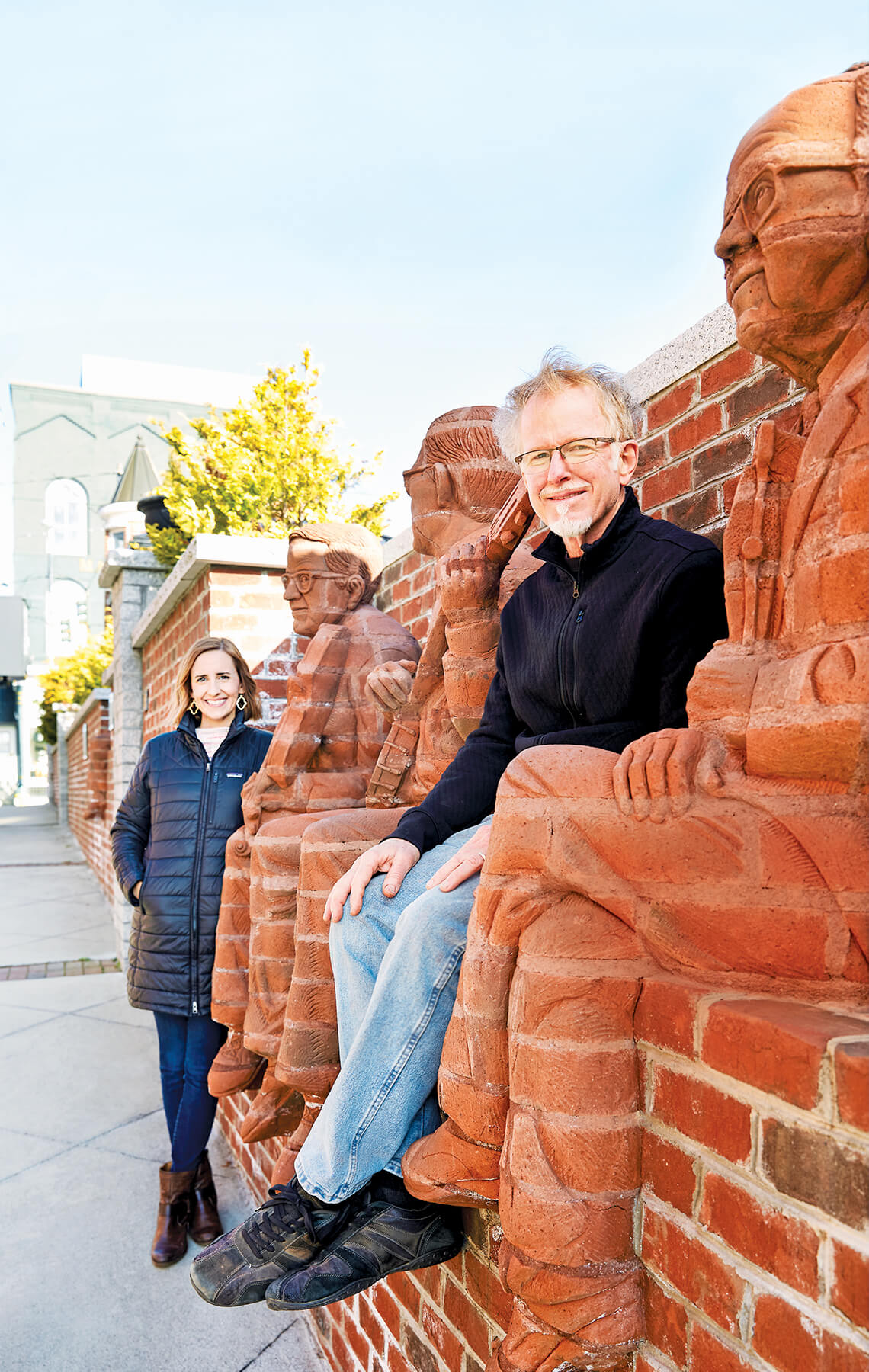 The concept evolved over time. Some residents wanted Mayberry characters on the wall. That idea was scrapped in favor of real people. “What I love about this is that it captures the essence of the people of Mount Airy as a whole, especially having the mill worker on there, because this represents so many people — hardworking people who cared about their community,” Morrison says. Even Griffith made it clear that his hometown was not Mayberry. “Real towns have real problems that must be dealt with,” the actor said. “All of Mayberry’s problems are solved in a half-hour.”

Some of the larger-than-life-size figures on The Whittling Wall represent those real struggles. L.H. Jones served as principal of Mount Airy’s Black high school before integration. The unnamed mill worker embodies a manufacturing industry that has largely disappeared. Other figures honor people who contributed to the city’s economy — like Floyd “Flip” Rees, who opened a clothing store in downtown Mount Airy shortly after World War II ended. The only living person depicted on the wall is singer Donna Fargo, who scored big hits on country and pop radio in the 1970s, including “The Happiest Girl in the Whole USA” and “Funny Face.” She sits in a casual pose, picking a guitar, her legs stretched out in front of her.

Fargo and the other characters immortalized on The Whittling Wall began life in Spencer’s studio, where he creates small models before carving the clay solids that become his trademark brick figures. “I tell North Carolina stories using North Carolina dirt,” the artist says. “I’m fascinated by the fact that eroded rocks can be modeled or molded and then essentially turned back into rock by the firing process. The fact that the very earth we walk on can be transformed into a lasting thing of beauty and utility astounds me.” 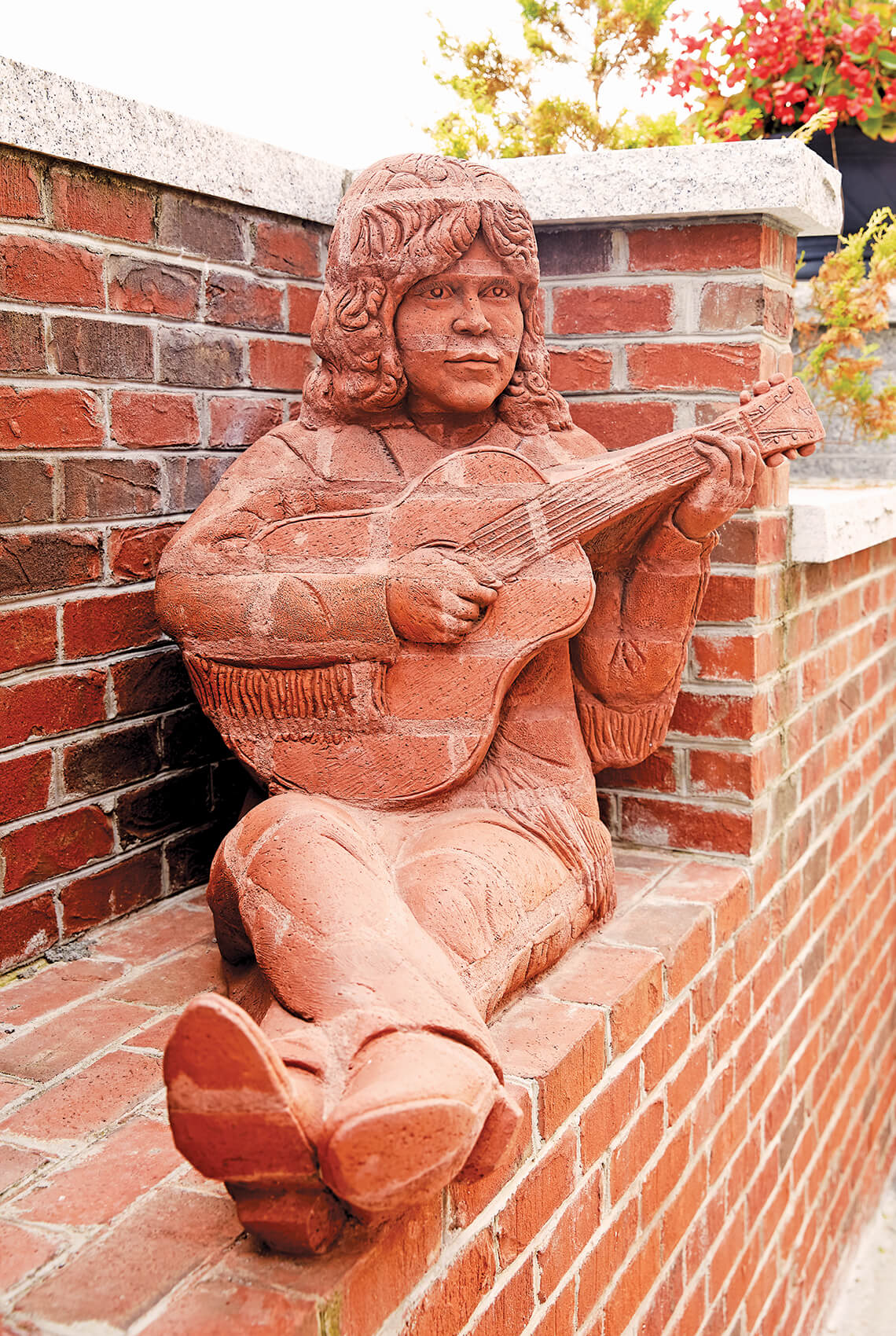 Spencer and his team worked on and off for about three weeks to install the figures in early 2018. He says he makes no effort to veil his public sculptures while they’re in progress. “People watching it go up is part of the excitement,” he says. Locals would stop by and photograph him as he worked, or chat with him about the figures. Spencer met relatives of the musicians on The Whittling Wall and people who had worked in Mount Airy mills. “Those are the projects that I really gravitate toward,” he says. “Projects that only make sense where they are, that wouldn’t make sense anywhere else, but become part of the fabric of that community.”

After spending some time communing with the eight historic strands of that fabric on The Whittling Wall, it’s time for Kelly Epperson to get back to the work of the present. He walks away, leaving his father enshrined with his old-time companions, and heads back over to WPAQ to keep the music going for a new generation of everyday people in Mount Airy.