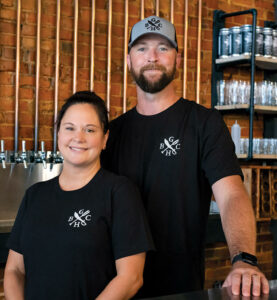 Thomas and Tabitha Reese sat in front of Elizabeth City’s waterfront in 2016, looking out over the Pasquotank River and brainstorming names for the brewery that they planned to open downtown.

Noticing that many of the buildings were empty in this city known as the “Harbor of Hospitality,” they felt that “ghost harbor” was a more accurate description. Bingo! Ghost Harbor Brewing Company was born.

Pursuing a business venture in a mostly abandoned area was a leap of faith, but the Reeses hoped that if they took that leap, others would follow. “I remember thinking how neat it would be to have your life based in the downtown,” Tabitha says.

Today, six years after the Reeses had that conversation, Ghost Harbor Brewing is surrounded by fine-dining restaurants, colorful shops, and live performances by local musicians on “Wailin’ Wednesdays.” The brewery’s taproom — now in a newer, bigger location after outgrowing its original space in Pailin’s Alley — hosts weekly events like musical bingo and trivia. The couple believes that their success, and the renaissance of downtown Elizabeth City, is largely due to merchants looking out for one another. “It’s a close-knit community,” Thomas says. “We’re very supportive of everyone because we know what it was like.”

2 Souls Wine Bar. Mel Martine and Nicole Hyatt — aka the “two souls,” or best friends, who opened this shop — were inspired to create a space where people could “linger longer” over a nice glass of wine. Customers can relax on a plush, jewel-toned sofa or chair and snack on small plates and charcuterie.

Seven Sounds Brewing Company. After four years of renovating, this 12,000-square-foot brewery, located in a building that was originally built for oil lamp production in the 1880s, opened in December 2021. Inside, take a look at the 1940s wooden beams crafted from locally milled trees, or grab a seat outside to enjoy a view of the Pasquotank River.

Coasters Downtown. Established in 2006, Coasters has long been one of Elizabeth City’s go-to spots for a wide assortment of craft beer and late-night fun. With a full bar and 24 taps with a heavy emphasis on regional craft beer, Coasters is Elizabeth City’s late-night destination — and features karaoke every Thursday night. Open from 12 p.m. to 2 a.m. 365 days a year, stop by to order a drink and one of Coasters’ signature pizzas made fresh-to-order with housemade dough and sauce — available for lunch, dinner, and late night.

Muddy Waters Coffeehouse. Located on West Main Street, this small coffeehouse has served Elizabeth City since 200. Indulge in desserts like sugar cookies, and sip Italian soda and coffee made with house-roasted beans.

Hoppin’ Johnz. The Mills family, which also owns The Mills Downtown Bistro, took over ownership of this restaurant — located in a former livery stable — in January. Head Chef Michael Mills serves Southern staples like the restaurant’s namesake dish, made with pork cheeks that have been braised for 18 hours. Thomas’s favorite is the burgers: “They have the best burger on the East Coast.”

Mills Downtown Bistro. At this downtown tapas restaurant, entrees are served on vintage china. Customers can enjoy the restaurant’s 1920s and 30s decorations while dining on flatbreads, crepes, and chocolate fondue for dessert.

Toyama Japanese Restaurant. Sushi and sashimi, miso soup and seaweed salad, hibachi-grilled entrées, and noodle bowls — Toyama has all of the staple dishes that you’d expect to find at a Japanese restaurant. And a trip to Toyama is “never a letdown,” Thomas says. “They are always on their marks. Always open. Always good.”

The Market. Tabitha describes this shop as a sort of bodega-meets-deli. “You can buy fresh fruit and to-go sandwiches and breakfast biscuits,” she says. The soups, salads, and sandwiches are made fresh daily. There’s also a special Sunday brunch for those hoping for a more leisurely visit. 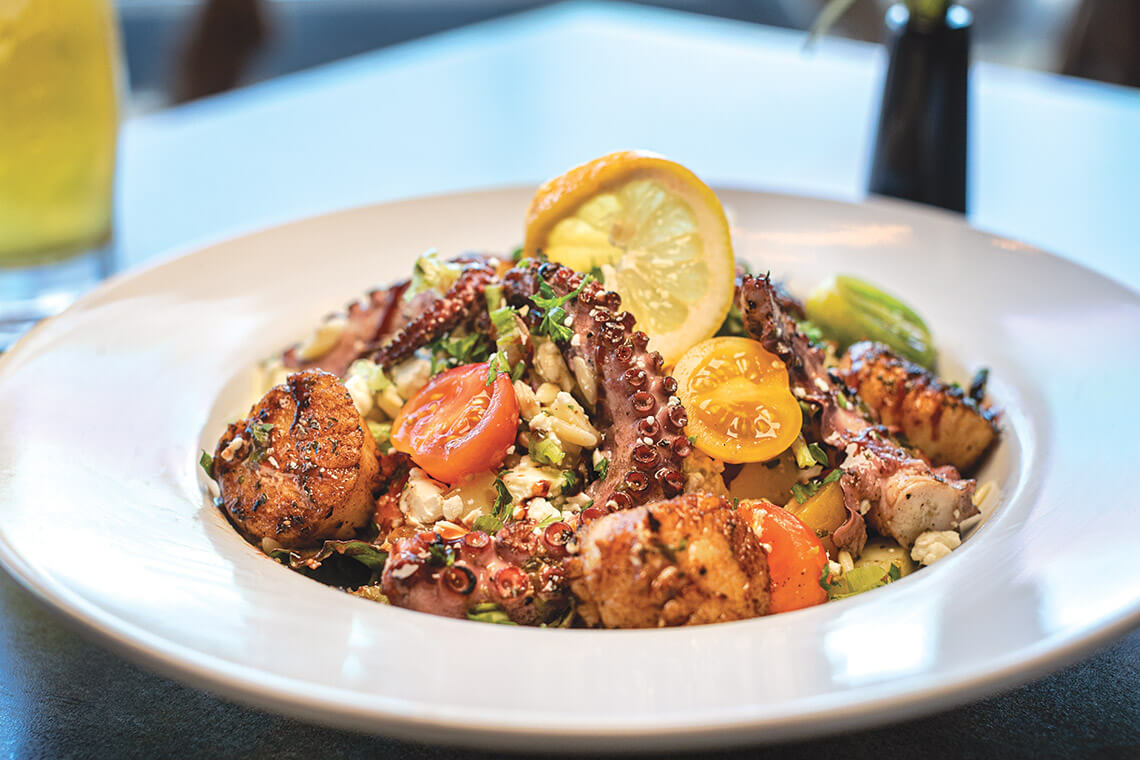 Cypress Creek Grill. Established in 1997, this waterfront restaurant was one of the first fine-dining spots downtown, and specializes in steak and fresh seafood, like grilled octopus and pan-seared local scallops over chilled orzo salad (above). “All of their blackened and seasoned seafood is so good,” Thomas says. “I can run over to Cypress and get one of the best blackened tuna sandwiches.”

Colonial Café. This breakfast and lunch café has been an Elizabeth City staple since the 1960s. Locals know to order the classic buttermilk pancakes, country ham, and sausage biscuits for breakfast, and club sandwiches and the Colonial Burger for lunch. Colonial also has a reputation for its delicious she-crab soup.

Big Boss Burritos. Big Boss started as a food truck in 2017 and is true to its name — the burritos are massive and delicious.

Elizabeth City Pizza Co. This pizzeria located in the historic Virginia Dare Arcade on East Main Street offers pies by the slice, each made with fresh ingredients. Try the “Angel,” made with mozzarella and ricotta cheese, olive oil, and garlic, or the signature vodka pizza baked with the house red sauce, fresh mozzarella, and a splash of vodka. 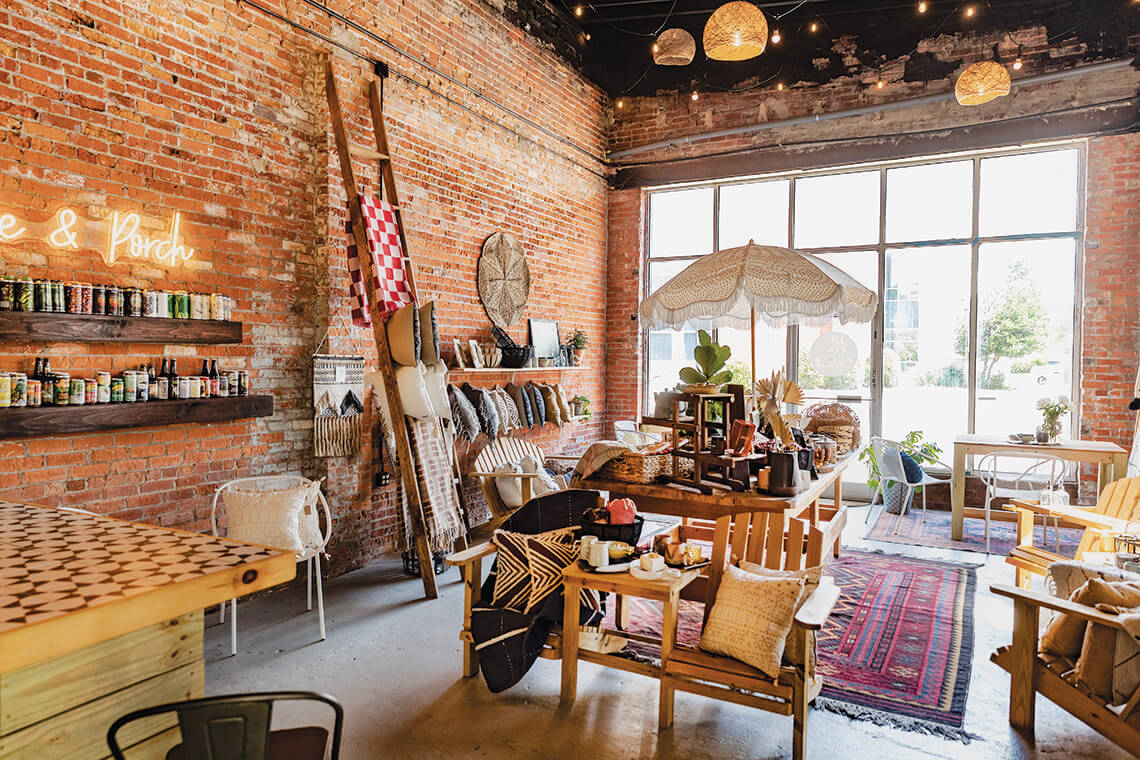 Pick up a vintage rug or an Adirondack chair at Pine & Porch. photograph by Charles Harris

Pine & Porch. This home decor shop sells rugs, tea towels, art prints, and outdoor furniture, but Tabitha is partial to the accent pillows, which come in neutral tones and fun patterns. The shop functions as a kind of community gathering place, serving wine and beer on tap and hosting events like a monthly book club.

Bijoux Vibes. Follow the signs on the corner of East Main and Poindexter streets to this women’s clothing boutique on the second floor of a building painted bright blue and coral. The store’s concrete floor, brick walls, and charred-wood accents give it an industrial-chic aesthetic. “It’s a cool place to have a boutique,” Tabitha says.

Jade Whale Co. This veteran- and woman-owned shop sells casual apparel — hoodies, T-shirts, beanies, hats — and a collection of bright and pastel-colored roller skates. “It has a little skate area where you can also custom-order a skateboard,” Tabitha adds. All proceeds benefit worldwide ocean and whale conservation efforts. 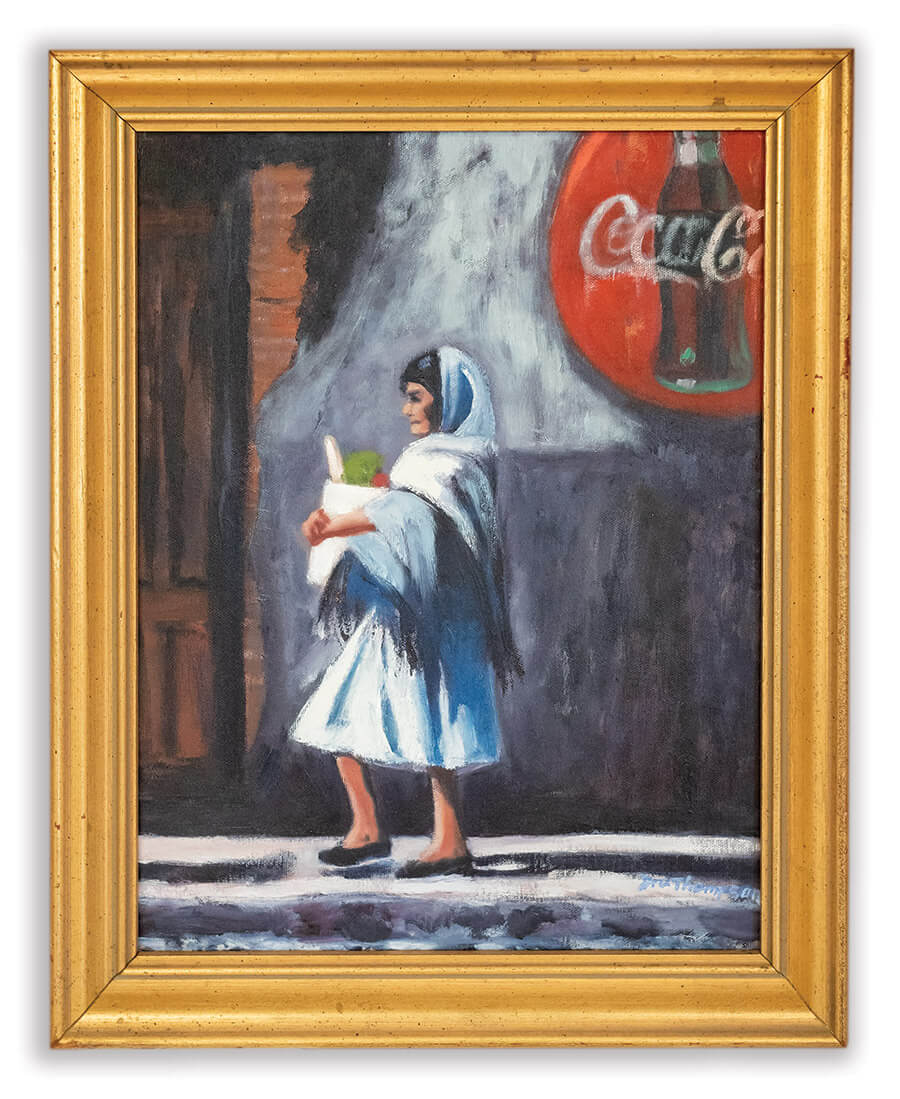 I Wish I Had a Coke by D. Thompson is one of the many paintings you might see in Arts of the Albemarle’s rotating collection of artwork. photograph by Charles Harris

Arts of the Albemarle. This nonprofit organization is located in a more than 100-year-old building that the community raised $3 million to transform. The first-floor gallery showcases a rotating collection of artwork from more than 250 local artists. Occupying the second and third floors is a 225-seat theater used for plays, musicals, and concerts. 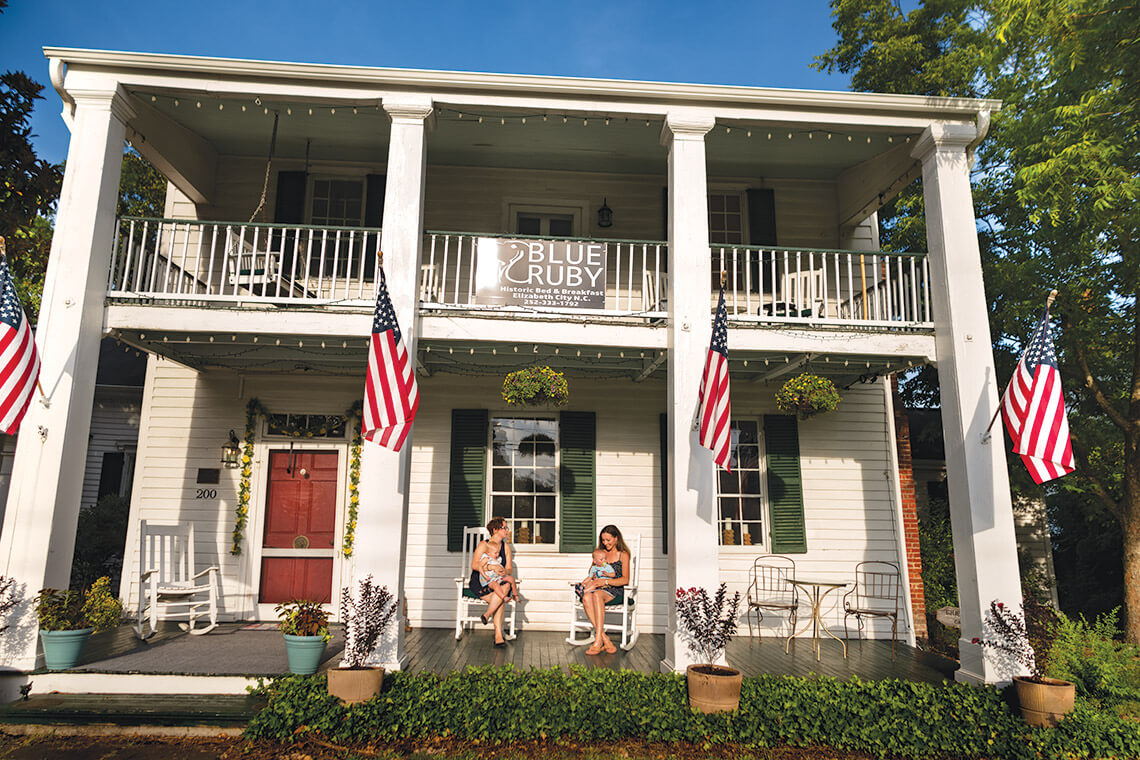 Take a load off at Blue Ruby Bed and Breakfast. photograph by Charles Harris

E. City Scattered Hotel. This self- check-in hotel has three apartment-style suites in the historic Fowler Building on North Water Street. Each room has a theme — boho chic, bicycles, and outer space — and can accommodate short-term or extended stays: Each apartment comes with a full kitchen and bath, and two have laundry facilities.

Blue Ruby at Grice-Fearing House Bed and Breakfast. Patrick Carl worked in the hospitality industry in Washington, D.C., for 11 years before taking over this bed and breakfast in what is believed to be the oldest house in Elizabeth City. Don’t skip breakfast — Carl makes a range of options, like egg-and-cheese biscuit sandwiches and maple sausage.

Culpepper Inn. A short walk from the Pasquotank River, this 1935 Georgian Revival-style home was transformed into a bed and breakfast in 1993. Original wood and ceramic tiled floors are still intact. Between the main inn and the Camellia Guest House, Culpepper can host 11 guests for weddings, special events, and celebrations.