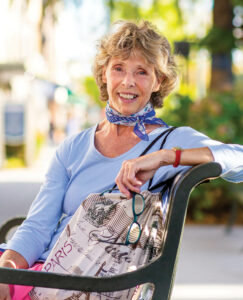 When the Skyland Hotel opened in Hendersonville in 1929, it became a landmark for visitors. The stately six-story building, at the corner of Main Street and Sixth Avenue, signaled — and still does — that they had arrived downtown. It was there that local tour guide Mary Jo Padgett’s parents, who lived in Rutherford County, spent their honeymoon, years before Padgett would move to Hendersonville from Atlanta.

Since 2014, Padgett has led history walks — including one that stops at the Skyland Hotel, which was converted to private residences in the early 1970s — through downtown’s picturesque streetscape, past trendy restaurants and breweries and quaint boutiques filled with local art and other intriguing wares. In tours covering Main Street; the Seventh Avenue Depot District; Oakdale Cemetery; and murals, mosaics, and ghost signs, Padgett reveals the history and the architecture of the town that she’s called home for more than 40 years.

“I’m a person who likes to know the history of the place where I’m living,” she says. “I thought if that was of interest to me, then it would be of interest to others. Like me, they are always happy by the end [of the tour] to say, ‘Wow, I feel so much more grounded, so much more in love with where I live now, because I’ve learned something about our past.’” 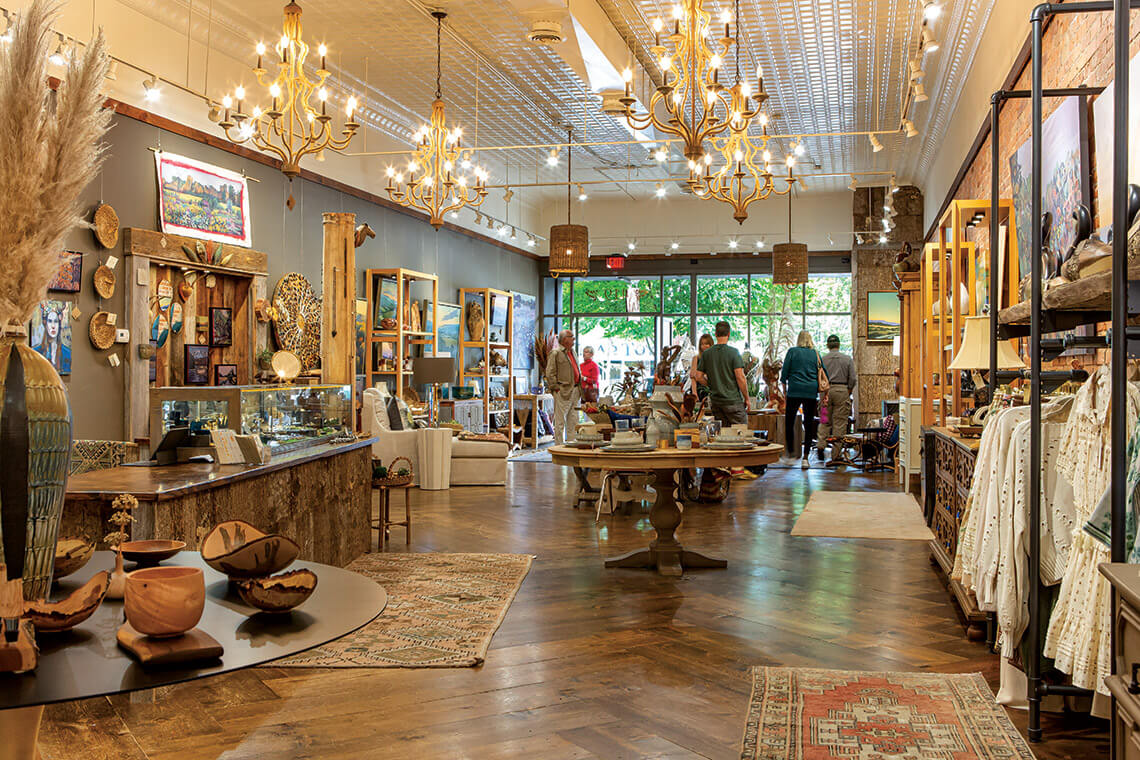 Woodlands Gallery. Furniture; clothing; jewelry; bath and body products; and original paintings, pottery, and woodwork are arranged in cozy vignettes at Margo Lea’s shop, which features nature-inspired products by regional makers. “She is discriminating about what she puts on her shelves,” Padgett says, “so you’re going to find some just outstanding work of potters and mostly local artisans.”

Wag! A Unique Pet Boutique. Since 2010, this boutique has been a favorite of pet owners, “especially those who like to show off and have their pets wear really cute things,” Padgett says. Founder Caroline Gunther has long been an advocate for animal welfare, and the Wag! staff can offer advice on pet behavior in addition to helping customers pick out the perfect food, toys, and other items for their furry friends.

Dish Girl. Kay Speranza’s small but vibrant shop on Sixth Avenue has “a great display of Fiestaware, some of it vintage, some of it new. It’s a really fun place,” Padgett says. Speranza sells Fiesta-brand dinnerware in every color, as well as other brands of dishware, home decor, and gifts.

Silver Fox Gallery. For more than 20 years, this woman-owned business has sold elegant furniture and local art created by more than 100 artists.

Narnia Studios. Barbara Hughes’s whimsical florist shop and gift boutique is a wonderland of American-made products, including local art, home and garden decor, jewelry, and bath and body products (you can’t miss the claw-foot bathtub filled with colorful soap rocks) — plus displays of tiny fairy statues and their houses. “She does fresh and artificial flower arrangements that are just lovely, in addition to all the fun, nice, clever things that she has in her shop,” Padgett says. 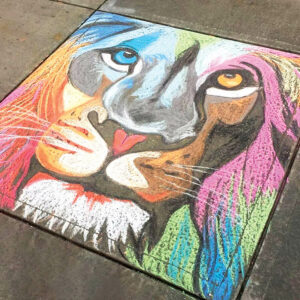 Each summer, Barbara Hughes of Narnia Studios organizes Chalk It Up!, a one-day event where artists of all ages and skill levels cover the sidewalks of downtown Hendersonville with colorful chalk drawings. “We end up with this magnificent, ethereal art show on the sidewalk the day of Chalk It Up!” Padgett says. “It invariably rains by the afternoon and gets washed away, but that’s why it’s so special.” 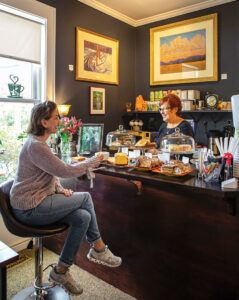 Get your caffeine fix and relax at Art & Coffee Bar. photograph by Tim Robison

Art & Coffee Bar. Sondra Smith-Vaniz’s cottage-like coffee shop on Fifth Avenue East is filled with comfortable chairs and couches, fresh flowers and plants, and local artwork for sale on the walls. “When you walk in there to have a cup of coffee or tea — and, of course, she’s got great locally baked pastries — you just move into a special, comfortable, relaxing place,” Padgett says.

Guidon Brewing Co. Mike and Connie Baer’s love for German-style beers (Connie is German, and Mike was stationed in Germany in the Army) inspired them to open Guidon Brewing Co. in 2019 after 15 years of homebrewing. Customers enjoy live music on the deck, games like cornhole and darts, and pub fare like bratwurst, sauerkraut, burgers, wings, and loaded nachos.

Oklawaha Brewing. Joe Dinan’s nano-brewery and taproom in downtown Hendersonville are inspired by three decades of love for craft beer and traditional Belgian styles. Customers can enjoy live entertainment and events six days a week with a small-batch craft beer in hand.

Skyland Barbershop. One of the first businesses to occupy the commercial space on the ground floor of the Skyland Hotel in 1930, this barbershop maintains its old-timey feel. “Barbershops were what men did, especially on Sunday before going to church,” Padgett says. “They would go to the barbershop and get their hair cut and get their beards trimmed.”

Aquarium & Shark Lab by Team ECCO. Since 2011, the first inland aquarium in North Carolina has been an important center of study for sharks, rays, and reptiles. The exhibit showcases a 2,000-gallon shark tank with 300 salt and freshwater species. 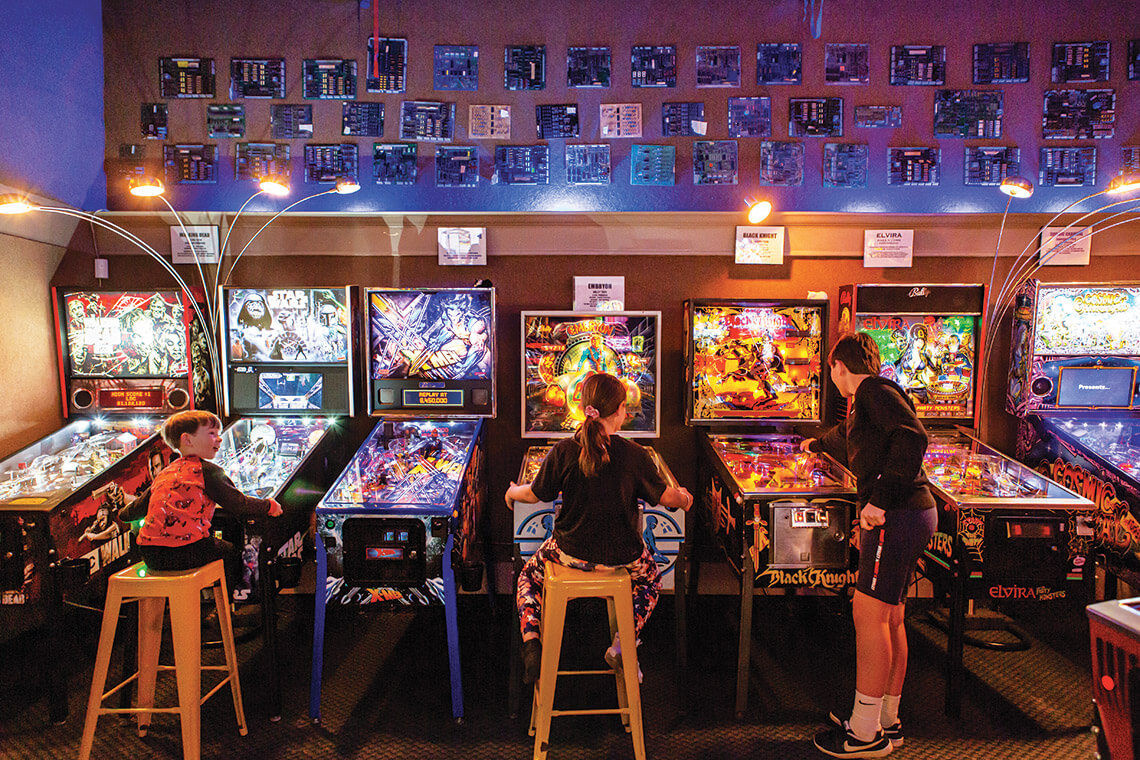 The Appalachian Pinball Museum is worth a visit whether you partake in the games or not. photograph by Tim Robison

Appalachian Pinball Museum. “I’m not a pinball player,” Padgett says, “but, oh my gosh, it’s just astounding to walk into.” Around 85 games — most of which you can play — range from vintage machines with information on their history to contemporary video games. “You can stay there all day and play pinball if you want to. Me, I’m just astounded at the lights and the sounds and the look of the whole thing.”

Mineral and Lapidary Museum. This museum displays a mix of gemstones and other finished material exhibits, highlighting North Carolina’s status as one of the nation’s most diverse mineral deposits. Visitors can discover fossils and meteorites, among other displays that showcase all that our state has to offer underground.

Apple Valley Model Railroad Museum. This historic train depot features detailed HO-scale model trains created by the Apple Valley Model Railroad Club. From a TV inside the depot, visitors can watch footage from a drone camera attached to the caboose of a model train to see an up-close view of the tracks. The museum also features historic railroad artifacts, including a practice telegraph system, a Southern Railway caboose, and a 1,000-pound, 110-year-old railway engine. 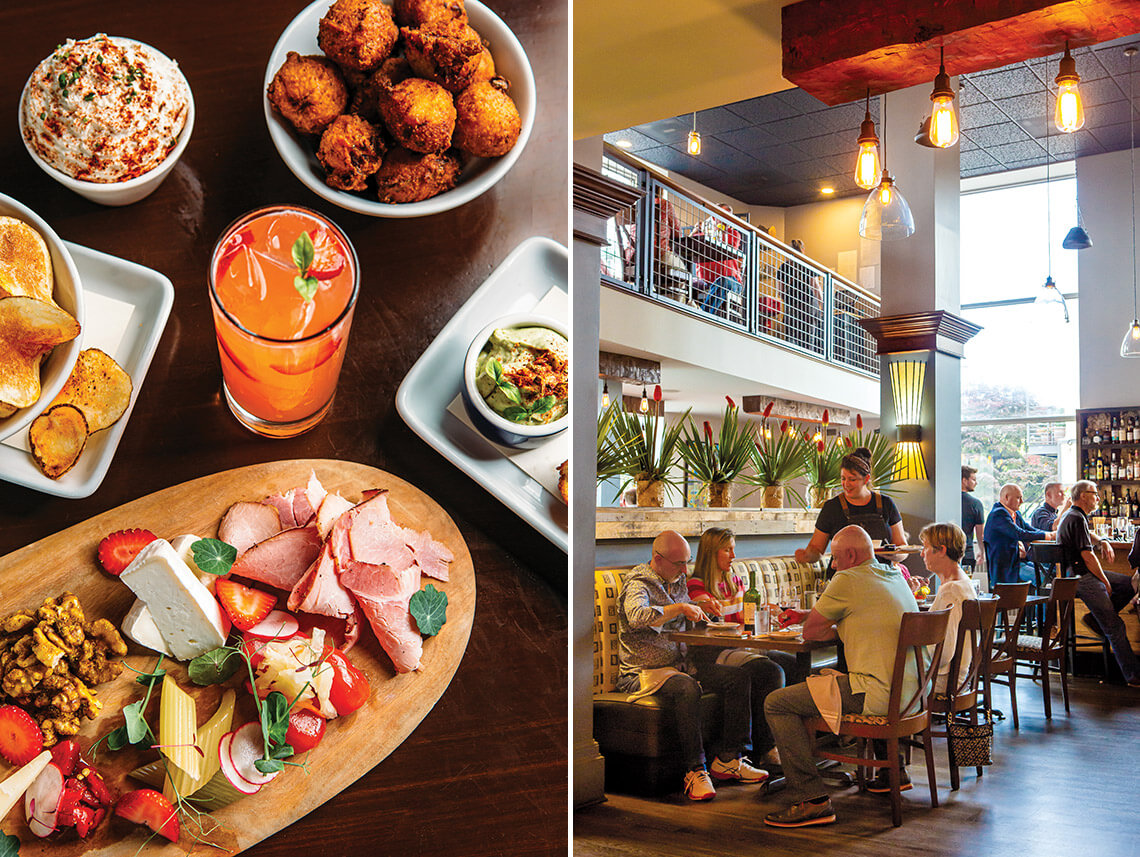 Order from a delicious, chef-driven menu at Postero, located in a former bank. photograph by Tim Robison

Postero. Located in a 1922 bank building designed by Hendersonville architect Erle Stillwell, Postero offers a chef-driven menu with views over Main Street. Inspired by the multicultural dishes that his mom made for him when he was a kid, Chef Jason Reasoner creates modern farm-to-table fare in an open kitchen.

Mike’s on Main. This ’50s-style soda fountain is a throwback to the building’s pharmacy days, with a working jukebox, neon signs, and old-fashioned advertisements and medicine cabinets lining the walls. “When you walk into that building, it is definitely like stepping back in time,” Padgett says. “The floor tile is still there, the painted copper ceiling is there, and the original soda fountain and stools are still there.” 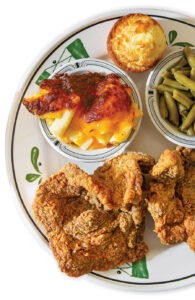 West First Wood-Fired. A massive stone oven tiled in red mosaic is the focal point of this pizza and pasta restaurant, a spin-off of the beloved Flat Rock Village Bakery. “You feel like you’re just part of the community when you’re sitting there having a meal,” Padgett says. Stained glass windows and paintings by local artists add to the community feel — as do the local beers, craft cocktails, and seasonal ingredients sourced from the area.

McFarlan Bakery. This old-fashioned bakery on Main Street has been serving the Hendersonville community delicious made-from-scratch cakes, pies, cookies, breads, and pastries, using the same recipes, for more than 80 years.