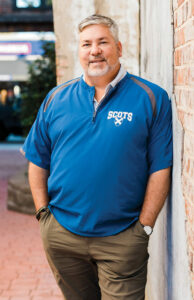 Even after Chris English left his hometown of Laurinburg to attend college in the mountains, he still considered himself a Fighting Scot. The mascot for Scotland County’s only public high school represents an area rich in Scottish heritage.

“It’s really not unique to us,” English says, “but we just kind of own it. I’ve always been proud of being from here.” That pride stems largely from Scotland High School, where the marching band is known for wearing tartan kilts, and Friday night football shuts down the town as business owners cheer on the team. “That ‘fighting,’ to me, is a key thing,” says English, who now serves as executive director of the Laurinburg Chamber of Commerce. “We’re fighting to build this community up.”

In the 1980s, the downtown department stores where English and his family used to buy school clothes and Christmas gifts began moving to nearby shopping malls. Word on the street was that downtown was done for. But in recent years, Laurinburg has begun to see a resurgence, with events like Sip’n Shop, Laurinburg After 5, and seasonal festivals that draw people downtown to support local businesses — many of which survived the pandemic because loyal customers wanted to help. “We’ve had ups and downs,” English says, “but it’s a community that pulls together and supports each other.”

Miyako Japanese Cuisine. Owner Lilly Ruan graduated from North Carolina State University with a degree in biology, but “her family had always been in the food business, and she loved to cook,” English says. Miyako specializes in mostly Japanese food — made-to-order sushi, hibachi, and teriyaki dishes — as well as Chinese-food favorites, like General Tso’s chicken and Mongolian beef.

Fore’s Family Restaurant. Kenny Fore and his nephews, Stephen and Head Chef Zach, opened their restaurant in December 2020 in honor of Kenny’s mother, Keiko, whose cooking inspired the family’s love of food. Most of the dishes are classic American fare, but the Teriyaki Bowl — with homemade fried rice, chicken, zucchini, and onions — is a nod to Keiko’s Japanese heritage. “If you’re hungry, that’s the thing to get,” English says. “It’s a lot of food.”

Scotland Bling. English’s wife, Belinda, started her business by selling costume jewelry and scarves out of the trunk of her car. Today, at her downtown boutique, she also sells gifts and clothing, including screen-printed T-shirts and sweatshirts. “During football season,” English says, “we do a lot of designs for Scotland High School football because we’ve got a lot of fans.”

Bob’s Jewel Shop. One of Laurinburg’s oldest shops — family-owned since 1934 — creates custom jewelry and makes repairs for generations of customers, many of whom travel from out of town to buy necklaces, rings, earrings, and bracelets from the same place their parents did. “This is where my mom did her shopping,” English says. “Even at a young age, I could tell that Mom was being taken care of, so this is where I come because I want that same treatment.”

Harley’s Tuxedo & Gifts. Owner Harley Norris worked at Baron’s Menswear downtown for 20 years before opening his own store in the former Bank of Laurinburg building in 2005. “There are probably a lot of people who have businesses here that learned how to treat customers from him,” English says. Besides tuxedo rentals, Norris also sells locally made gifts and several lines of hats and T-shirts. 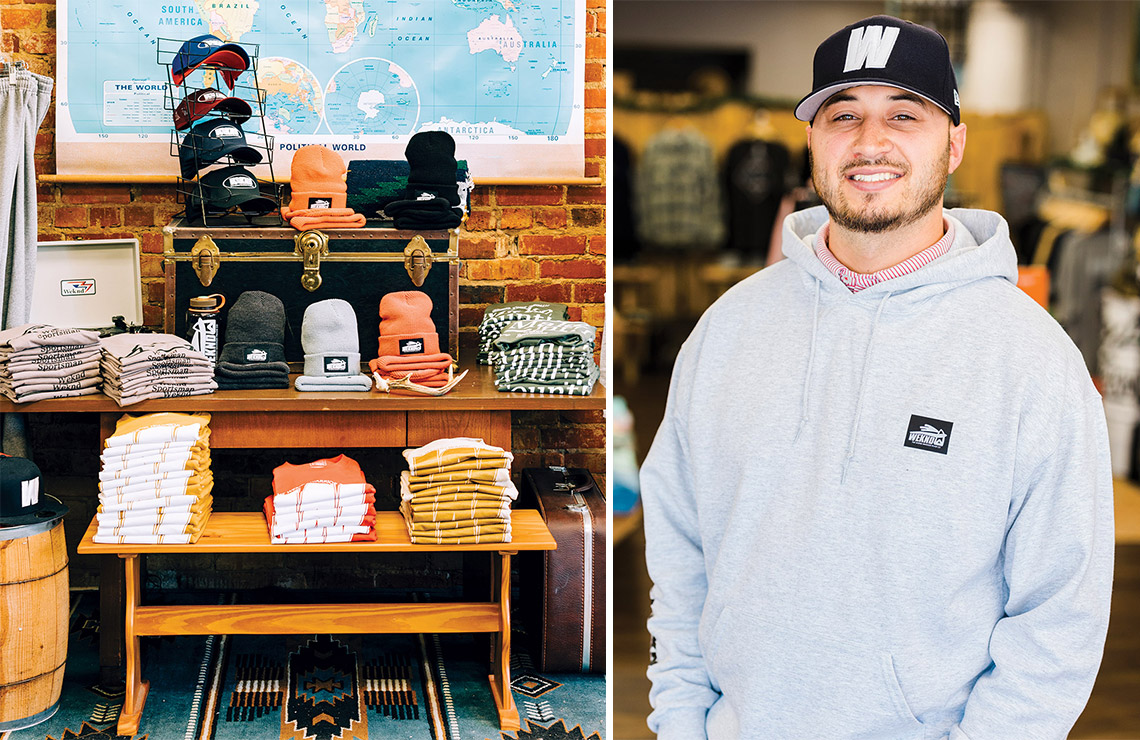 The Weknd Warrior Trade Co. Five years ago, Harley Locklear opened a storefront to sell outdoor lifestyle brands like Southern Marsh, Fish Hippie, Sanuk, and Hey Dude. Now, customers can buy his Weknd Apparel merchandise at the store, too. His hand-drawn logos, which reflect his favorite pastimes — hiking, fishing, and hunting — as well as his Lumbee heritage, appear on hats, shirts, pants, and accessories.

Terry’s Boutique. Owner Terry Gallman previously ran the Highlights boutique for 20 years and made it one of the chain’s most successful locations because of her customer service. Two years ago, she began buying her own merchandise and opened Terry’s, which caters mostly to working women with classic styles that are suitable for church and special events, too.

’Tis the Season. ’Tis the Season began with a group of women who wanted to make Christmas special, and eventually became a nonprofit. The storefront sells seasonal decor that helps fund its mission to bring community events for all seasons downtown. “It was this big community effort,” English says. “All of these groups, individuals, organizations, and churches pull together to support it.”

McNair Town & Country. Since 1882, this hardware and agricultural store has been selling nails and seeds by the pound, as well as anything else you might need for your home or garden. James “Coot” Pierce bought the store from his employer in 1989 and continues a tradition 140 years in the making.

The Town & Country Collection. Anne Stokes and Larry Horne opened an antiques collection in the McNair Town & Country store in 2012, selling furniture and decor from their years of traveling around the world with their Horne International Designs firm that Larry founded in 1982. See items they used to stage homes as well as pieces they’ve collected at auctions and art galleries over the years.

Art by Design. This custom framing shop also offers locally made gifts and works by area artists, including paintings, ceramics, jewelry, and sculptures. 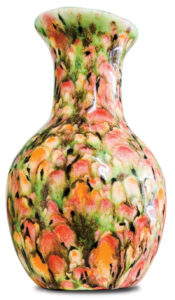 Make your own masterpiece at Colour Me Creatif. photograph by Matt Ray Photography

Colour Me Creatif. Tina Oxendine-Maynard opened her “paint-your-own” studio in 2016, offering unglazed pottery and blank canvases to which customers add their own colorful touches. For those who need a bit of creative inspiration, idea books are on hand (some designs even come with step-by-step instructions and tracing paper), or you can find a design online, and Oxendine-Maynard will sketch it on a canvas for you to paint.

John Blue House and Heritage Center. Farmer and inventor John Blue’s 1891 “steamboat gothic” home now houses a museum about the history and culture of post-Civil War rural North Carolina. In addition to ornaments on the porch and railings that Blue hand-carved, one of the home’s most notable features is the stained glass on the 12 exterior doors, 90 percent of which is original.

Lumber River State Park. From nearby Wagram, hikers can access the three-mile Chalk Banks Trail that loops through wetlands and hardwood forests in this nearly 12,000-acre park. The Lumber River is one of just five in the state — and the only black water river — that’s designated a National Wild and Scenic River. “To me, it’s one of the most beautiful places on Earth,” English says. “To float down that river is so peaceful.” 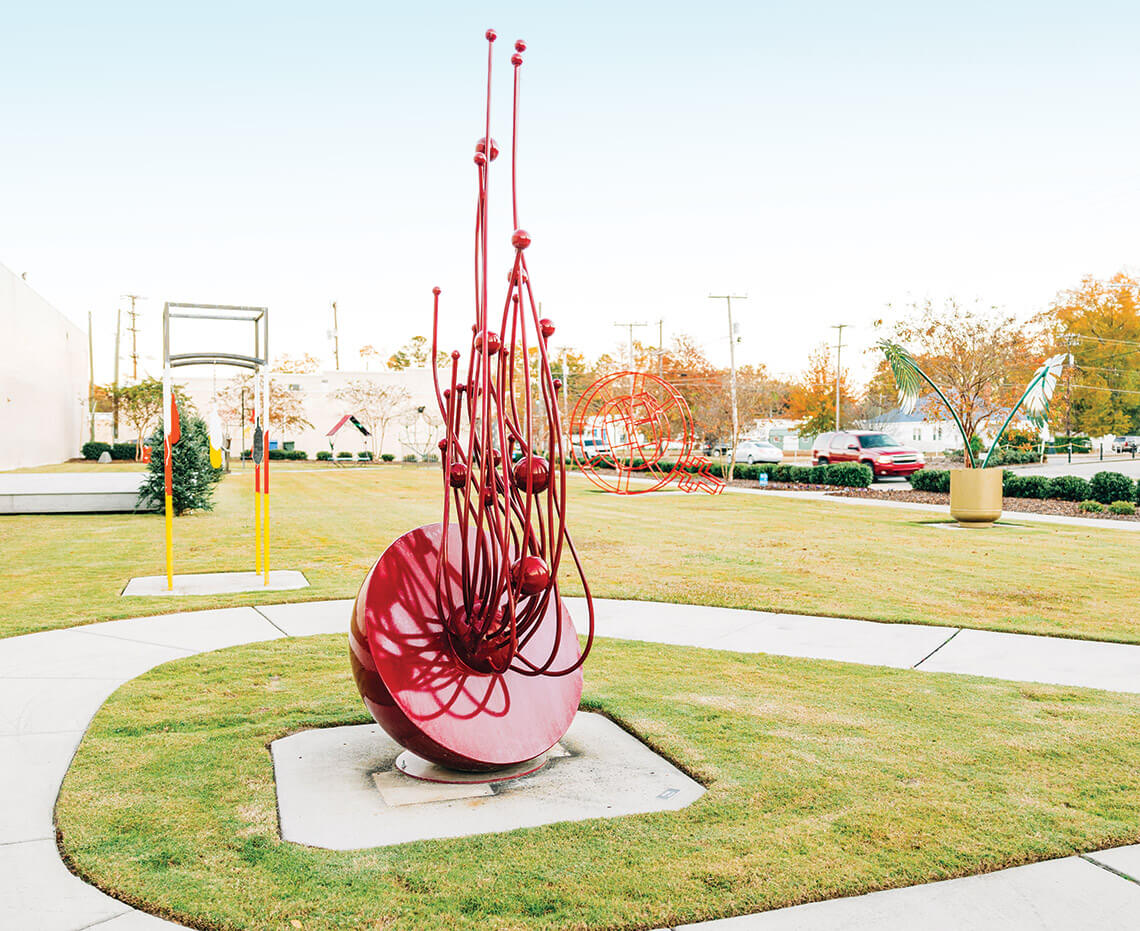 Take a stroll through the Art Garden downtown. photograph by Matt Ray Photography

Art Garden. A sculpture garden on the corner of Church and Main streets features 16 colorful works by students and professors at the University of North Carolina Pembroke in neighboring Robeson County. New sculptures — made from recycled materials found in Scotland County — are rotated in each year, and the space hosts small community events and performances.

Storytelling & Arts Center of the Southeast. The former McNair’s department store — “one of those department stores where I used to run around in and hide under the clothes racks,” English says — is now home to the Arts Council of Scotland County. The center hosts plays at the ENCORE! Theatre, art classes, and other events that support the performing and visual arts in the community. 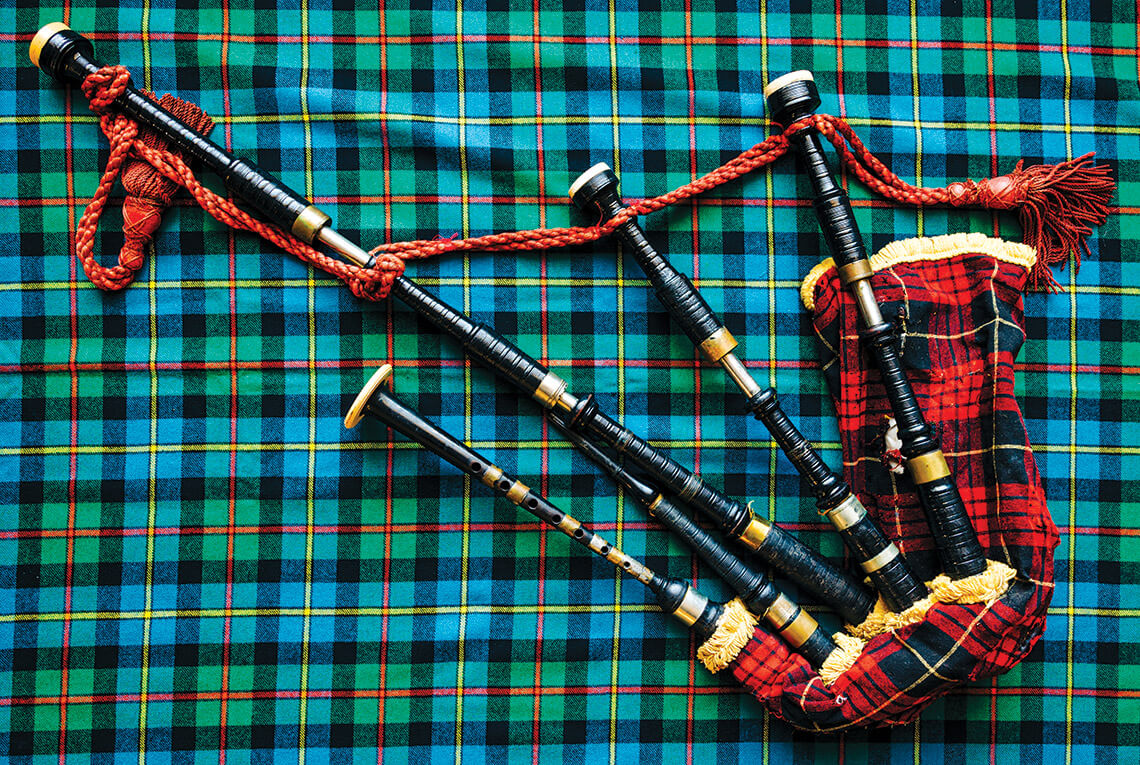 The Scottish Heritage Center has many noteworthy artifacts, including a bagpipe that was created by Jack Smith in the 1940s. It is the only known musical instrument produced by a Scottish immigrant in North Carolina. photograph by Matt Ray Photography

St. Andrews University Scottish Heritage Center. The Scottish Heritage Center at Laurinburg’s St. Andrews University was established in 1989 to celebrate the rich culture of Highland Scots, whose largest North American settlement was located in the upper Cape Fear and Sandhills regions through the 19th century. The center houses old and rare books on Scottish and Scottish-American history, genealogy, and culture; exhibits on Scottish settlements in southeastern North Carolina; and one of the largest collections of Celtic music in the country. The center also hosts concerts, lectures, and an annual Scottish Heritage Weekend in March. 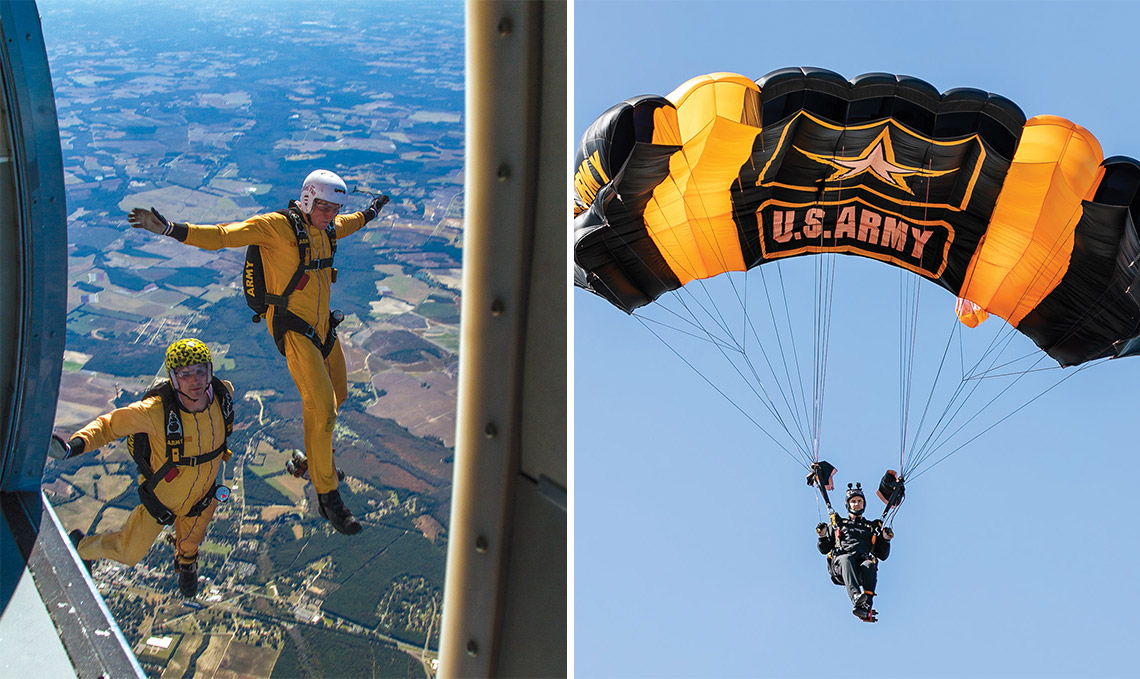 If you’re lucky, you might catch a glimpse of the Golden Knights practicing at the airport, their main training facility. photograph by MEGAN HACKETT/DVIDS, U.S. ARMY PHOTO BY STAFF SGT. DAVID MEYER, 49TH PUBLIC AFFAIRS DETACHMENT/RELEASED. THE APPEARANCE OF U.S. DEPARTMENT OF DEFENSE (DOD) VISUAL INFORMATION DOES NOT IMPLY OR CONSTITUTE DOD ENDORSEMENT.

Laurinburg-Maxton Airport, Home of the Golden Knights. A few miles outside of town, the Laurinburg-Maxton Airport is the home of the U.S. Army Parachute Team, the Golden Knights. These daredevil parachutists are performers and competitors, jumping out of planes, binding themselves together in aerial formations, performing complicated acrobatics, and using their parachutes, American flags, and colored smoke to put on an impressive show at events around the world.

Chauffeur’s Apartment. This Airbnb near downtown is the former chauffeur’s quarters above the carriage house, and overlooks a courtyard garden and pond that are accessible to guests. The apartment accommodates two people and includes a private kitchen and bathroom.