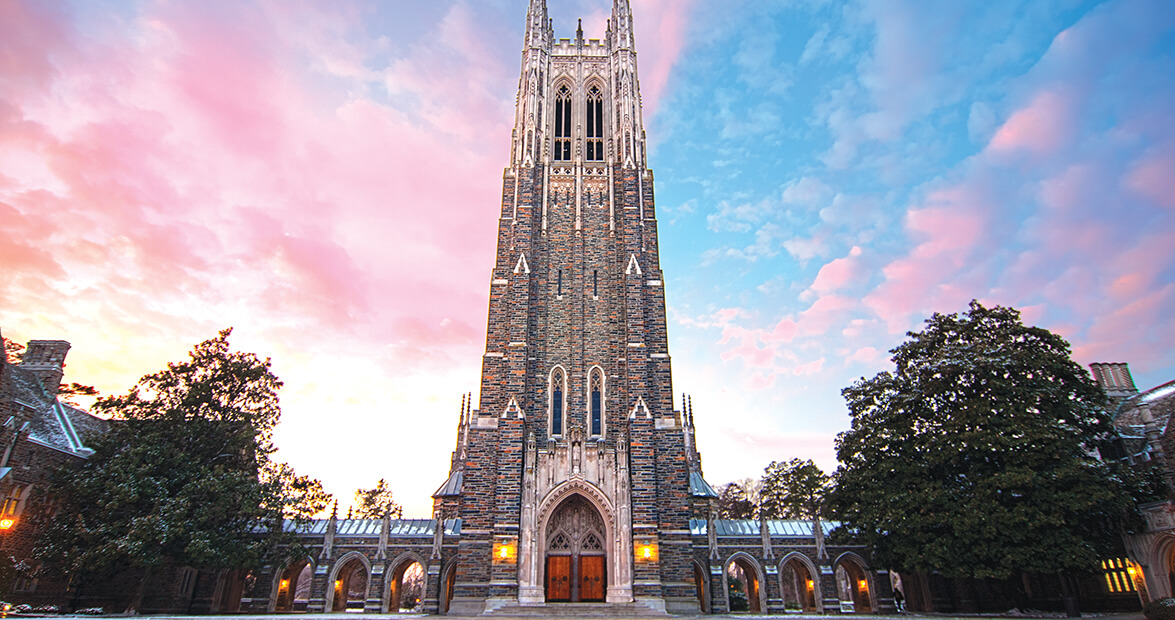 Standing in the shadow of Duke Chapel’s majestic, 210-foot-high tower, listening to the glorious music emanating from the historic set of bells clanging high within the tower, it’s not hard to imagine even the angels smiling at the sound.

You know what is hard to imagine, though? A bell tower without any bells.

Yet that’s almost what happened. When chief designer Julian Abele of the Horace Trumbauer architectural firm designed Duke University’s Gothic chapel more than 80 years ago, he set aside space in the tower for bells. But there wasn’t yet any funding to buy the carillon — the tower’s elaborate 50-bell mechanism that’s been serenading students, faculty, staff, and campus visitors for generations. 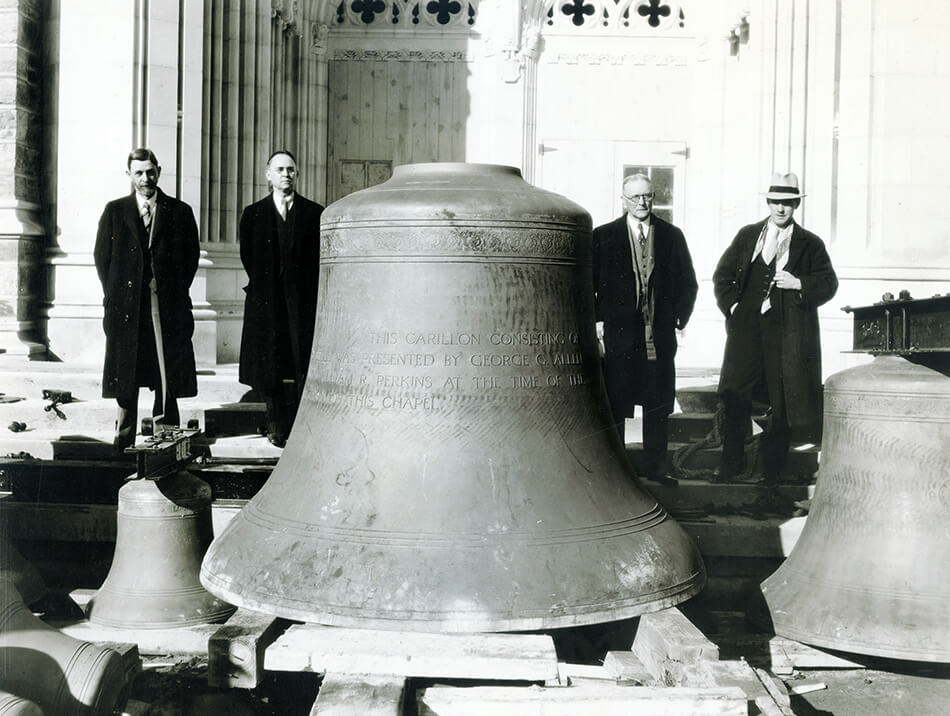 The Duke Chapel carillon — including the largest bell, weighing more than 11,000 pounds — was installed in 1932. photograph by Duke University Archives

It wasn’t until George G. Allen and William R. Perkins, chairman and vice chairman of the Duke Endowment, gifted the carillon to the university in April 1930 that the bells went from hope to reality. The two men gave the surprise gift in memory of James B. Duke, who had established the Duke Endowment (and for whose father, Washington Duke, and family the university was named). According to school records, it’s not clear why they chose such an unusual gift, but it’s been speculated that, living in New York, they came up with the idea after seeing a carillon being installed at Park Avenue Baptist Church in New York City in 1925.

Regardless, their gift was well-received by university officials. In thanking Allen and Perkins, Duke President William Few wrote that their beautiful gift “will in a sense be the voice of the University.”

Indeed, these many years later, the chapel’s world-class carillon remains the instrument most closely associated with the school, an integral part of the rhythm of campus life. Every weekday at 5 p.m., the university carillonneur, J. Samuel Hammond, rings the hour on the largest bell, then proceeds with a 15-minute recital, playing music of his choice. Almost every Friday, the recital includes the school’s alma mater, “Dear Old Duke” — a tradition dating back to the early 1980s — and every Sunday, he plays before and after the morning worship service. The bells also can be heard on special occasions such as convocations, Founder’s Day, baccalaureate services, and holidays. 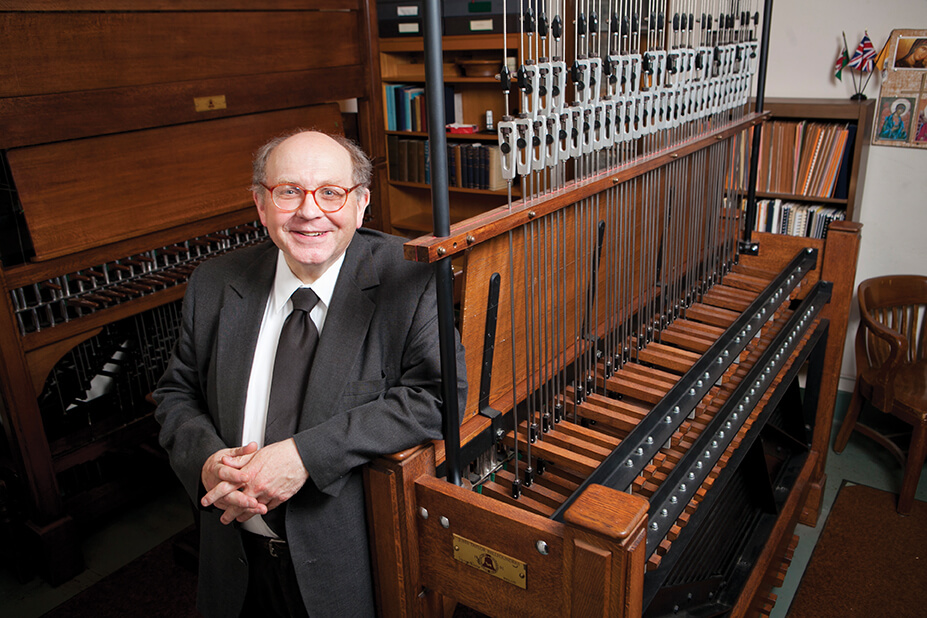 J. Samuel Hammond has been playing the Duke Chapel carillon for more than 50 years. photograph by Les Todd/Duke Photography

In 1932, however, when the chapel was completed and the bells were installed, carillons were still something of a novelty in the United States, and even more so here in the South. Duke Chapel was one of the first facilities in the region to have a carillon. People were so curious about it that, when esteemed carillonneur Anton Brees performed the inaugural recital on the instrument that June as part of commencement weekend, more than 10,000 people — about the same size crowd that attends Duke basketball games at Cameron Indoor Stadium — came to hear him play.

The carillon remains an integral part of the rhythm of campus life.

Duke’s carillon was cast by the world-renowned John Taylor & Co. Bell Foundry of Loughborough, England, famous for casting many of the bells at St. Paul’s Cathedral in London, including the 16-ton “Great Paul.” With a range of four octaves, the carillon consists of 50 chromatically tuned bronze bells, ranging from the largest — a behemoth weighing more than 11,000 pounds (that’s more than five times the weight of America’s Liberty Bell) — to the smallest, which tips the scales at a mere 10½ pounds and is just more than six inches in diameter. The bells are bolted into a steel framework about three-fourths of the way up the tower, with their clappers connected by steel cables to a keyboard that sits in a room directly beneath the bells. That room is the carillonneur’s studio, where he strikes wooden keys with his closed fists and pushes pedals with his feet to manipulate the various clappers and play music. The bells, now in their ninth decade, are a testament to the instrument’s durability.

Although the bells are the originals, “most of the mechanism — keyboards, transmission system, clappers — was completely replaced in 1992,” says Hammond, who has been the university’s carillonneur for more than 50 years. “The mechanical design is much the same as the original, but with significant improvements developed by Taylor over the intervening 60 years.”

One of the carillon’s little-known claims to fame happened on August 17, 1939, when Duke presented what is believed to be the nation’s first “vocarillon” concert — a performance featuring a vocalist singing along with the bells. Internationally known mezzo-soprano Mary Frances Lehnerts sang — without amplification — from the tower’s small balcony about 175 feet up, accompanied by Brees, then the university carillonneur. The unusual concert, which reportedly drew a crowd of about 5,000, succeeded because of the singer’s powerful voice and the musician’s ability to play the bells softly. The Durham Morning Herald wrote that Lehnerts “sang with no more effort than would be required in a small concert hall.”

The two teamed up again in 1949 for a similar concert, which attracted a crowd of hundreds and was broadcast on ABC radio stations.

Despite that unique slice of history, though, the carillon is not known for its ability to be played softly — it’s known for projection, ringing loudly enough to be heard across campus. Being in the carillonneur’s studio beneath the bells can be “quite loud,” Hammond says, but anywhere else within listening distance is, and always has been, the place to be when the musical notes rain down from above. Even 84 years after the instrument made its debut, that’s a message that still rings loud and clear.

J. Samuel Hammond, who has been playing the Duke Chapel carillon for more than 50 years, will present a recital on February 5 at 1 p.m. The recital, which is free and open to the public, will honor the 65th anniversary of Queen Elizabeth II’s accession. For more information, visit chapel.duke.edu/music.