Up with the Sun

At the annual sunrise service on North Topsail Beach, the sermon is delivered alongside salt breezes and the sound of waves on the shore. The service is hosted by a group of Sneads Ferry churches, and those in attendance are among the first in the state to witness the sunrise. “We joke that we’re on the edge of the world,” says Pastor Bill Young of Sneads Ferry Presbyterian Church. Farther west, the sunrise service at Chimney Rock has been known to draw folks out of bed in the middle of the night, giving them time to make the journey to the top of the iconic rock formation before the sun comes up. The inspirational notes of “Amazing Grace,” played on bagpipes, ring out through the panoramic pulpit, which offers breathtaking views of Hickory Nut Gorge and Lake Lure awash in the first light of day. — Zach Skillings 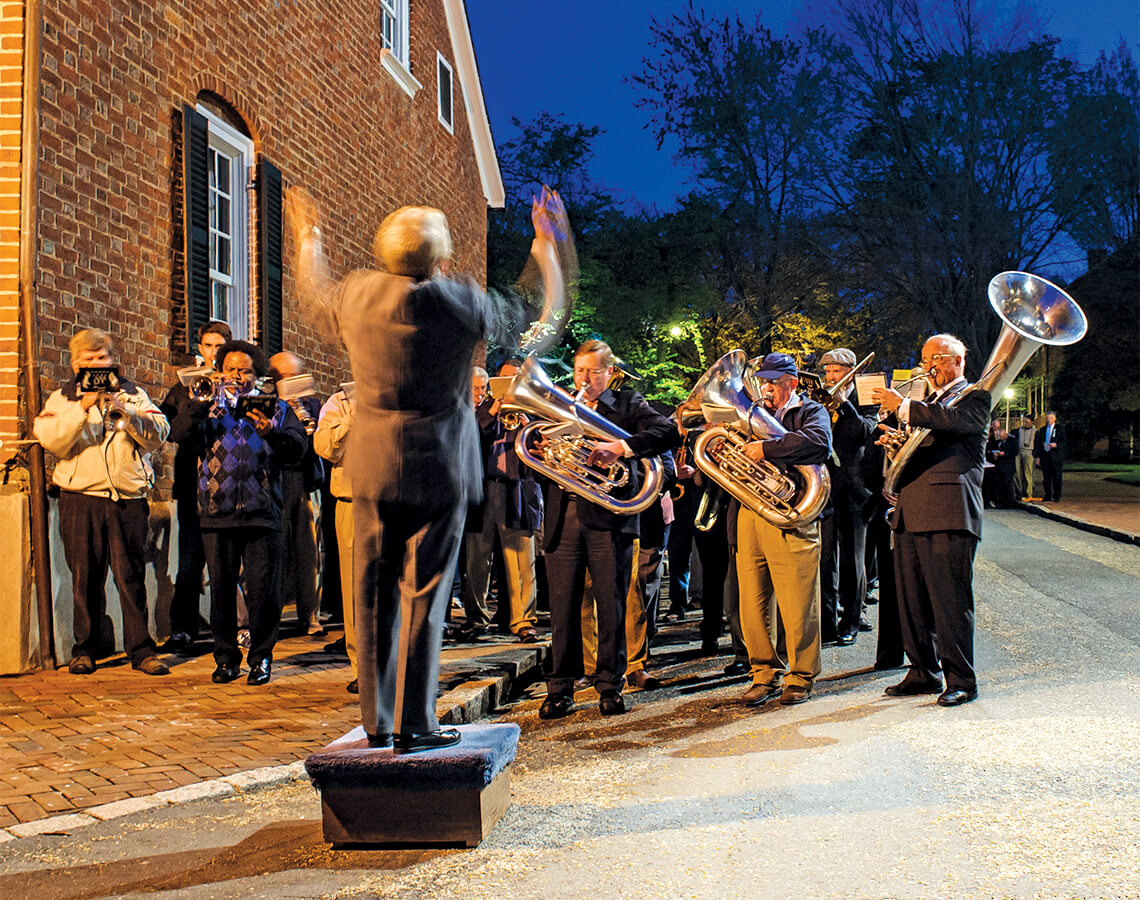 The sunrise service “about moves me to tears each year,” says Jeff Whitsett, one of the band directors. “It’s breathtaking.” photograph by Jay Sinclair

In the early hours of Easter morning, the opening notes of “Hail, All Hail, Victorious Lord and Savior” float up from brass and woodwind instruments in neighborhoods across Winston-Salem. Moravian Band members spread themselves throughout the city to awaken members of the church for the sunrise service, a celebration of the resurrection of Christ that has been held each year since 1772, and virtually during the pandemic. As the morning progresses, the smaller band groups converge on Old Salem, gradually joining together until four large groups can be heard playing antiphonally in front of the Home Moravian Church. The service begins when the presiding minister proclaims, “The Lord is risen!” Later, the congregation processes quietly to God’s Acre, the name given to all Moravian graveyards, where at last the full band joins together in triumphant glory as the sun rises. — Rebecca Woltz 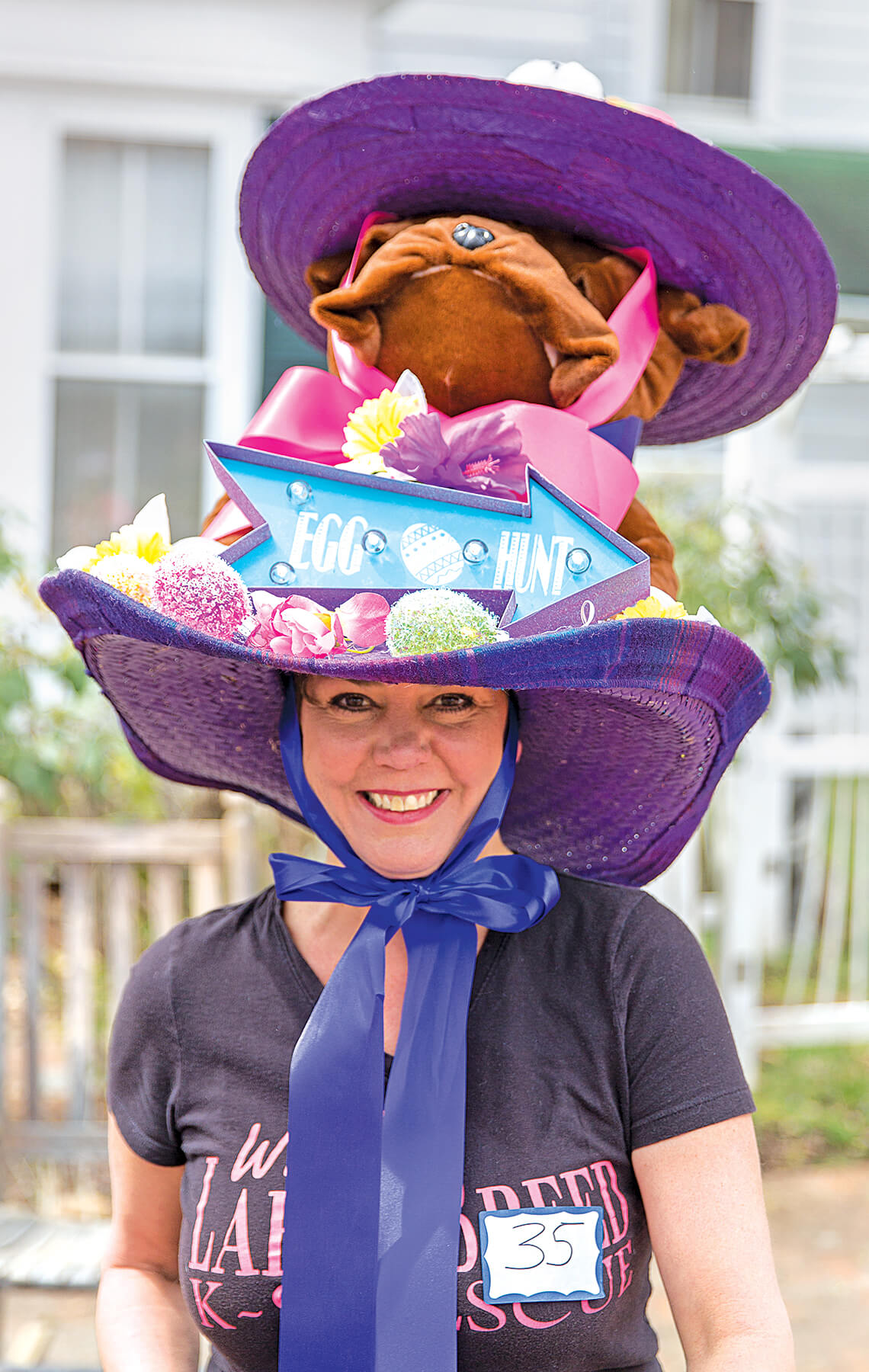 It wouldn’t be Easter in North Carolina without a quirky creations on display in Dillsboro’s Easter Hat Parade. photograph by JACKSON COUNTY TDA

Church bells ring, a buzzer sounds, and hundreds of impatient kids take off running. Once they’re let loose, there’s no stopping the eager egg hunters, whose baskets swallow up 1,000 eggs scattered across two Southport locations in 20 minutes or less. When the frenzy is over, a handful of lucky children go home with a golden egg that could win them a prize. On the other side of the state, in the mountain town of Dillsboro, festive paradegoers don outlandish creations in the annual Easter Hat Parade. Judges select the best hats in categories such as “poofy-est” and “best-smelling,” and pets participate, too. There’s even a celebrity appearance: The Easter Bunny comes along for the ride in an antique convertible car. — Rebecca Woltz 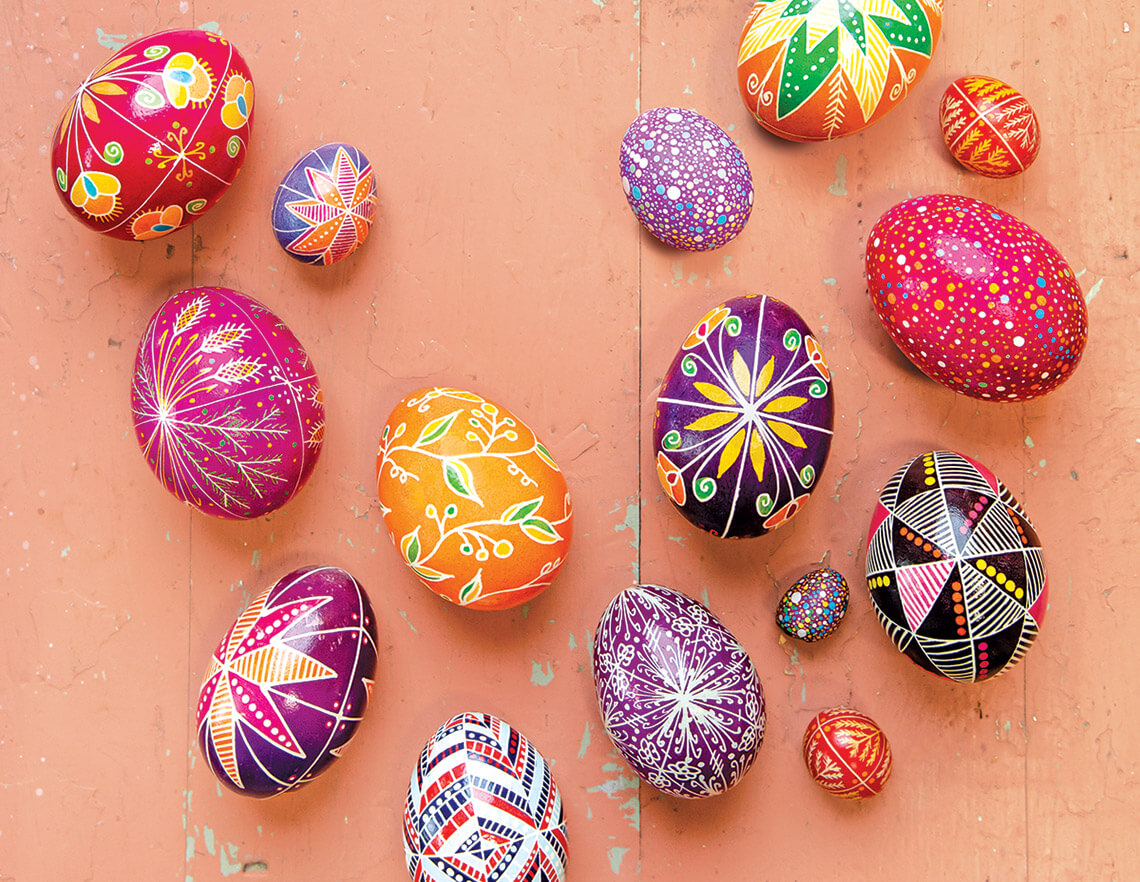 Simple designs take Andrea Kulish an hour to complete, but more complex patterns can take days or even weeks of work. Kulish uses melted beeswax to form a wax resist on the eggs, which is removed at the end to reveal her designs. photograph by Tim Robison

The Art of Easter

These eye-catching Easter eggs hold a special place in Andrea Kulish’s heart. They’re called pysanky eggs, a form of ancient Ukrainian folk art, and they provide a connection to Kulish’s late mother, who taught her how to make them as part of a childhood tradition. Now, Kulish shares her creations at Studio A, her shop in the River Arts District of Asheville. The vividly colored eggs display symbols of good health, prosperity, and fulfillment of wishes in the form of hand-designed depictions of nature. Kulish, who hosts workshops to teach others about her craft, finds joy in passing along a piece of her Ukrainian heritage. — Zach Skillings 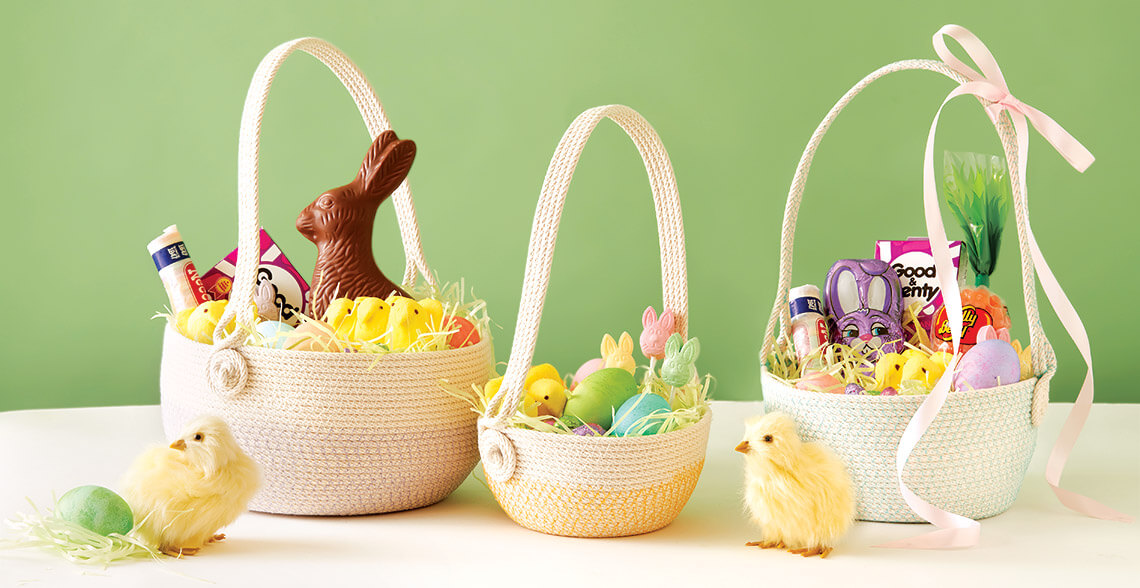 The cotton rope that Katherine Lile turns into baskets and coasters at Mountain Thread Company in Blowing Rock is custom-braided by a North Carolina manufacturer. photograph by Stacey Van Berkel

When the Easter Bunny makes his rounds in North Carolina, he gets a little help from the artisans at Mountain Thread Company. In her “modern quilt shop” and studio, tucked inside a big yellow house in downtown Blowing Rock, Katherine Lile coils lengths of cotton rope into baskets too sweet to put away after the egg hunt’s over. As a fourth-generation quilter, Lile opened the shop in 2015 to share her passion for her craft; over the years, she’s stitched together a community of like-minded makers. — Katie Saintsing 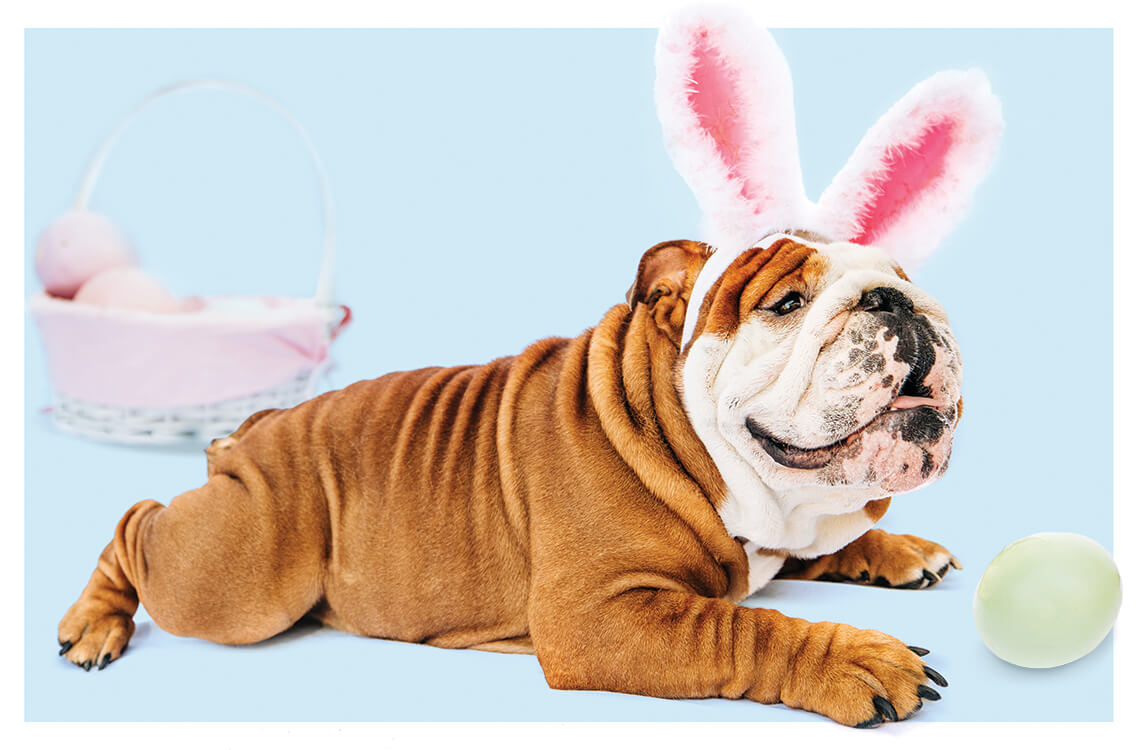 Five hours were allotted to film the Cadbury commercial, but Henri was such a great actor that they wrapped set in an hour and a half. Now, the Santillos say, he’s learning how to skateboard. photograph by Matt Ray Photography

You may recognize this adorable wrinkled face from Henri’s acting debut in the 2019 “Clucking Bunny” Cadbury Creme Egg commercial, a role that he won out of a pool of 4,000 animal contestants. Henri’s performance in the commercial transformed the English bulldog into a local celebrity in his hometown of Wilmington. “I knew from the moment he was born that he was gonna be something special,” says his owner, Kathie Santillo. When he’s not posing for the camera, Henri enjoys chasing bubbles, cruising around in his remote-controlled Bentley, and chowing down on hand-fed meals of chicken, rice, and vegetables. — Zach Skillings 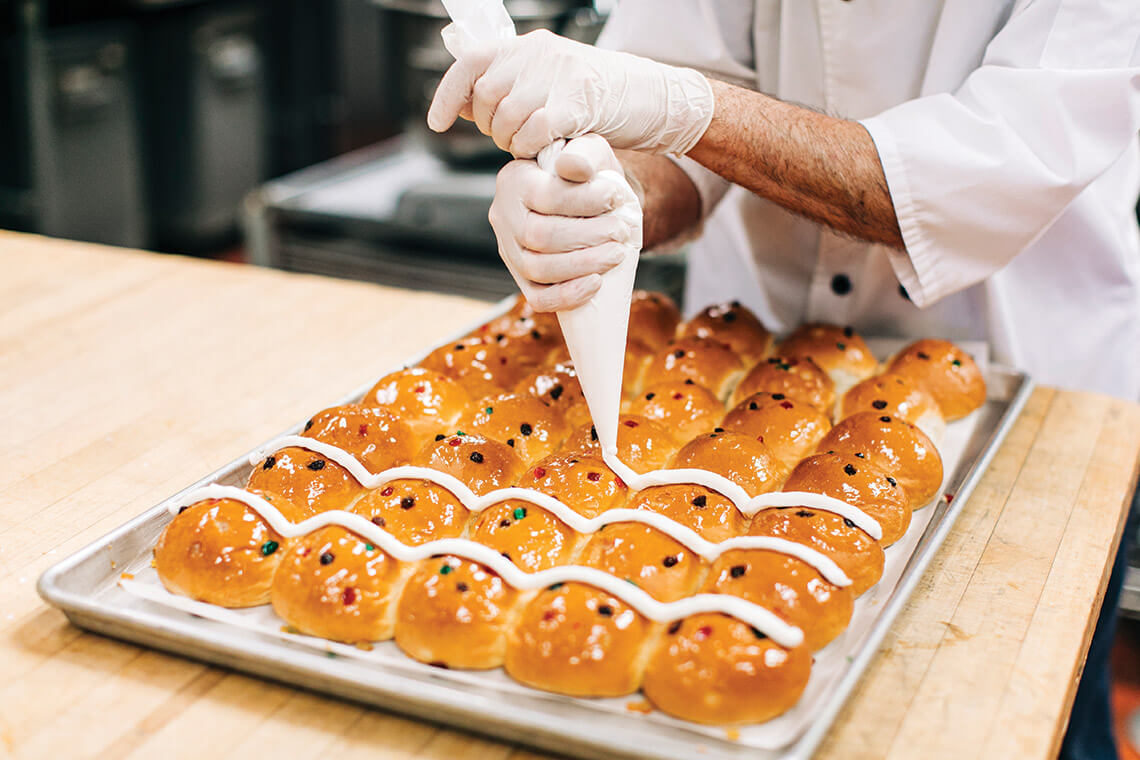 Apple Annie’s hot cross buns — lightly spiced and sweetened with citron fruits and raisins — are part of a Lenten tradition that may date to the 12th century. photograph by Matt Ray Photography

The scent of nutmeg and cinnamon marks the beginning of Lent at Apple Annie’s Bake Shop in Wilmington. The spices are key ingredients in the bakery’s recipe for hot cross buns, which Jamy Giufurta, the shop’s head baker, has been making the same way for 35 years. Many customers have standing weekly orders for the buns in the 40 days leading up to Easter, and the shop’s team loves to be a part of the holiday’s traditions. “Creating these memories at home with your family is so important,” says Krissy Mingia, head of marketing. “We feel honored that we’re able to be a part of [these celebrations] for so long, for so many people’s whole lives.” — Rebecca Woltz 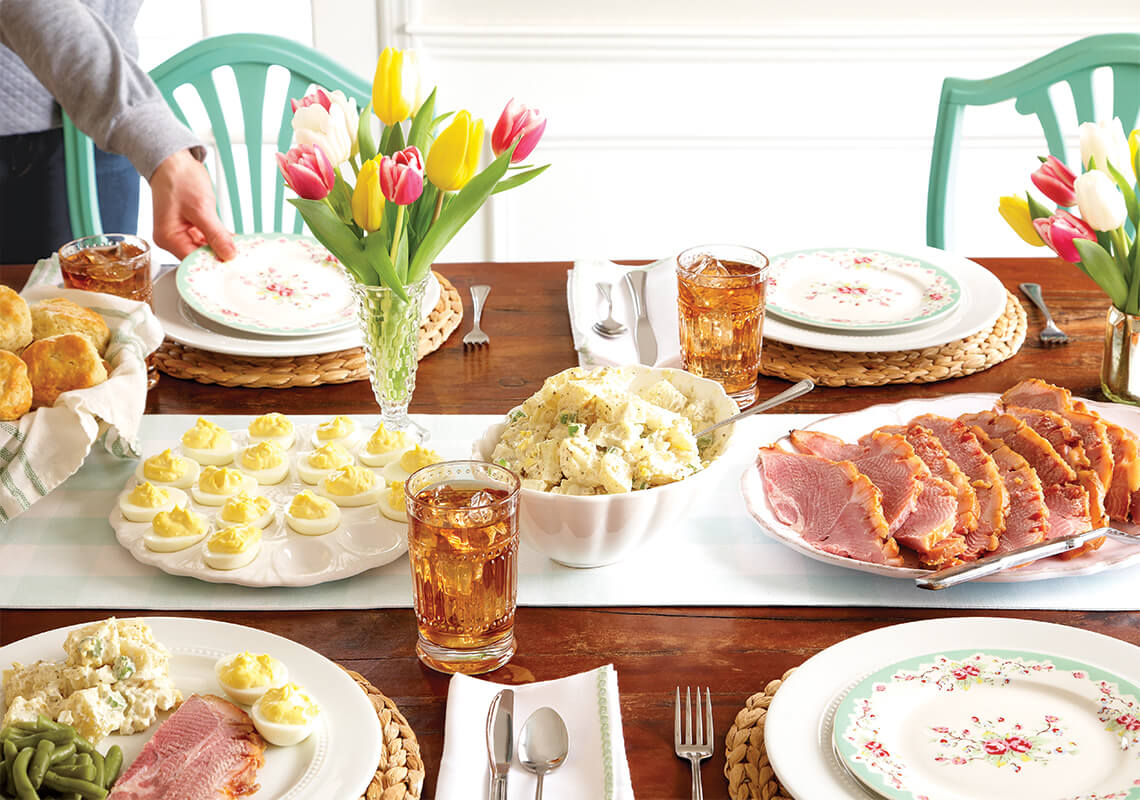 A 1963 issue of this magazine, then known as The State, presented a novel idea: Easter is a holiday — why not throw a party? “Easter brunch is a delightful way to entertain after church on that most glorious of all Sundays,” wrote columnist Carol Dare. The suggested menu — courtesy of Beth Tartan, longtime food editor of the Winston-Salem Journal — was very of the moment, featuring ham kebabs, fresh pineapple on the half shell, chicken livers supreme, scrambled eggs with avocado cubes, and apple rolls. For many of us, especially this year, a simpler approach is in order. Our family gatherings might be small, but as we pass plates of ham and deviled eggs, potato salad and pillowy biscuits, we’ll remember what a blessing it is to be together. — Katie Saintsing 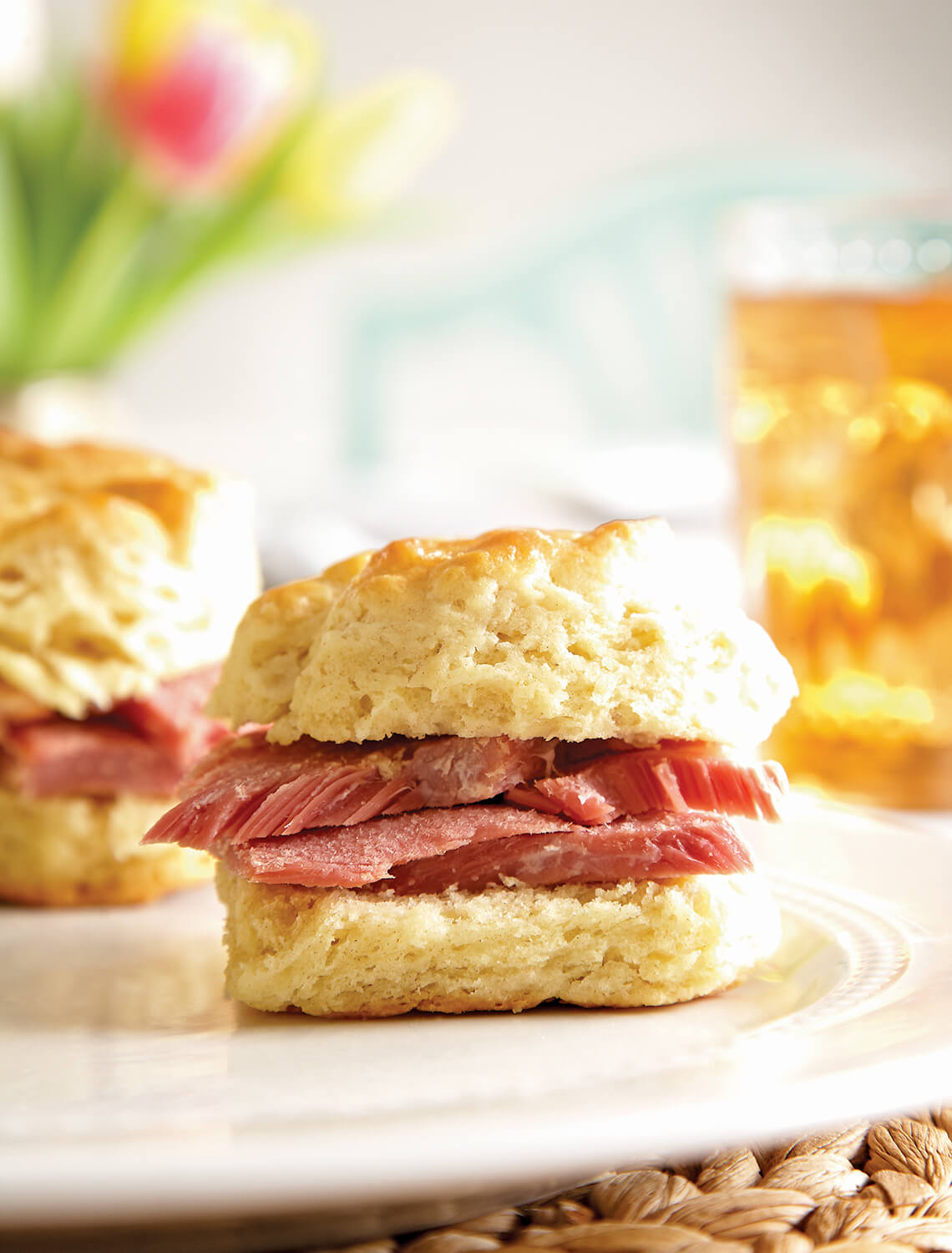 Ham from Mays Meats in Taylorsville. photograph by Matt Hulsman

There’s a reason many of us eat ham on Easter. (Not that North Carolinians ever need a reason to tuck into a ham biscuit.) Before the advent of modern refrigeration, pigs were slaughtered in the fall, when temperatures were cool. By springtime, the meat, which had been curing all winter, was on hand and especially flavorful. Technology has changed, but the traditional meal has endured. For more than 40 years, many North Carolina families have purchased their Easter entrée — be it ham or lamb — from Mays Meats in Taylorsville. Wayne and Margie Mays started the meat processing company in 1976; today, their sons Jimmy and Mike continue the family business, supplying fresh cuts to restaurants, grocers, and customers who visit their shop in the foothills of Alexander County. — Katie Saintsing 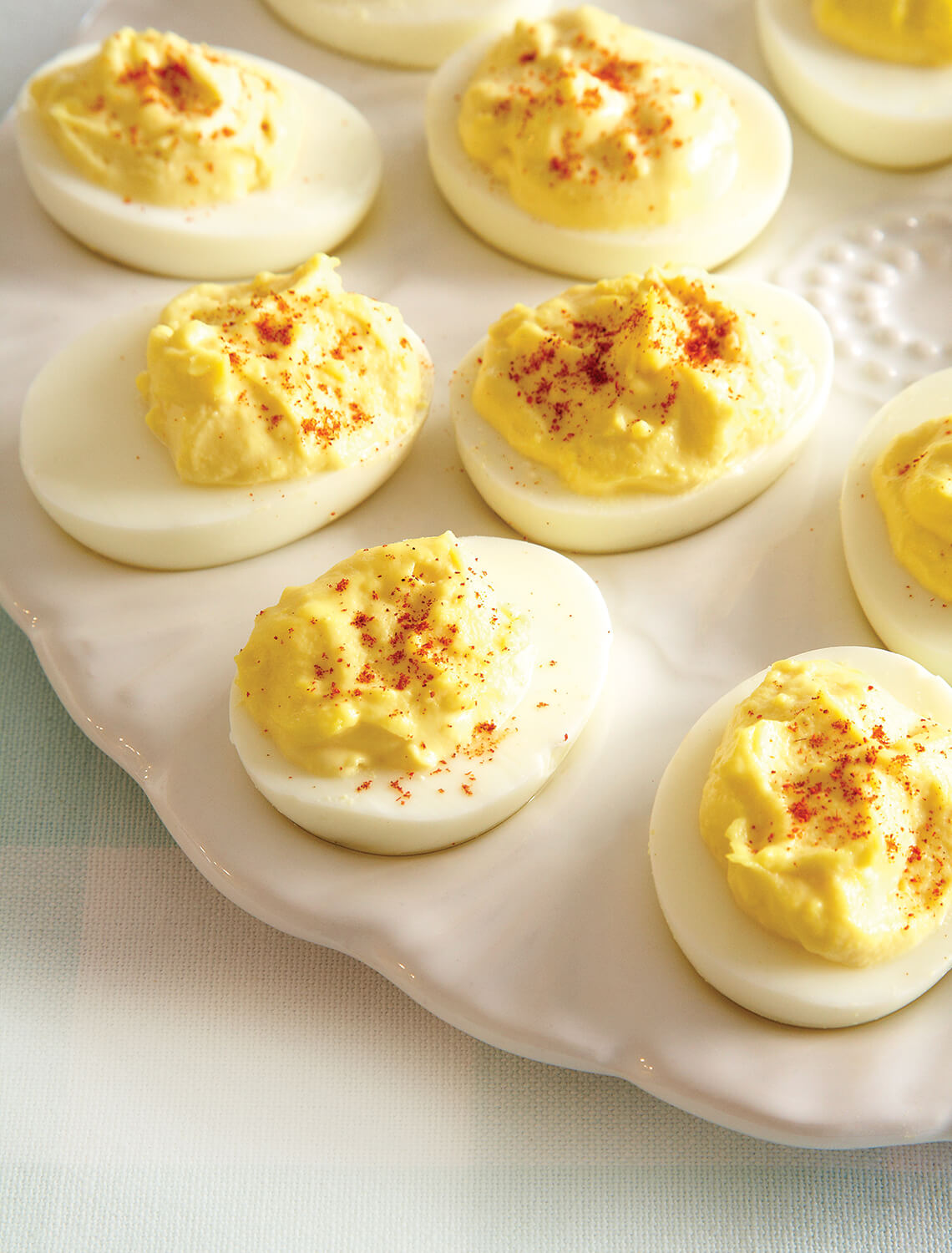 It’s time for your deviled egg plate to shine! Although this most cherished piece of china might make only a few appearances during the year, good eggs are always in season. All year long, customers at the Greensboro Farmers Curb Market seek out the Massey Creek Farms booth for fresh eggs laid on land that’s been in Garland McCollum’s family since 1749. All of McCollum’s animals are pasture-raised in Rockingham County, including the chickens, who live in a moveable coop, or “hotel.” And as it turns out, happy hens make the most delicious eggs. — Katie Saintsing