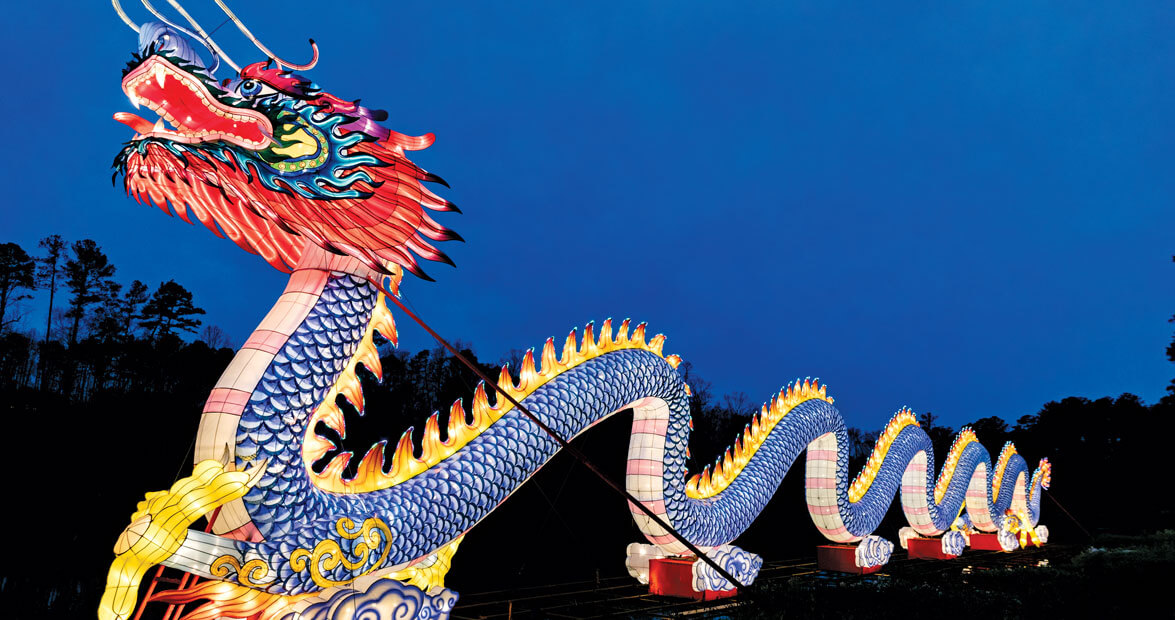 n hour before showtime, Miao Zhang works his way through a theme park of silk. He checks on his inanimate employees — three pandas jubilantly playing the Chinese tile-based game mah-jongg; a fuchsia stiletto with a paisley design, twirling on a platform; and a fierce-looking nine-ton dragon — to ensure that they’re working properly.

These fanciful creations are lanterns: vibrantly colored fabric stretched over iron frames, illuminated by dozens of LED lights and strategically placed around Koka Booth Amphitheatre in Cary for maximum visual impact. About 8,000 lights bring this magical playground to life. Miao, the North Carolina Chinese Lantern Festival’s project manager, is responsible for making sure that every light turns on, six days a week, from late November to mid-January — and every day during Christmas week. At 6 p.m., the gates open, and parents pushing strollers, couples holding hands, and families reminding their extended members to stick together enter this cultural wonderland.

Thump, thump, thump. As kids pass through the entrance, their little gloved hands beat sticks on a drum lantern that changes color with each strike. A rainbow of lights dazzles overhead. But the main attraction is the silk tunnel at the center of the amphitheater: 12 brightly colored arches, one for each Chinese zodiac sign. Characteristics of the signs — their representative animals and years — are listed on their corresponding colors. “Mom, what animal are you?” one boy shouts as he weaves through the tunnel. Others excitedly exclaim, “I’m a tiger!” or “I’m a snake!” People huddle around specific arches — the magenta horse, the coral sheep, the pale blue rabbit — revealing loyalty to their respective signs. 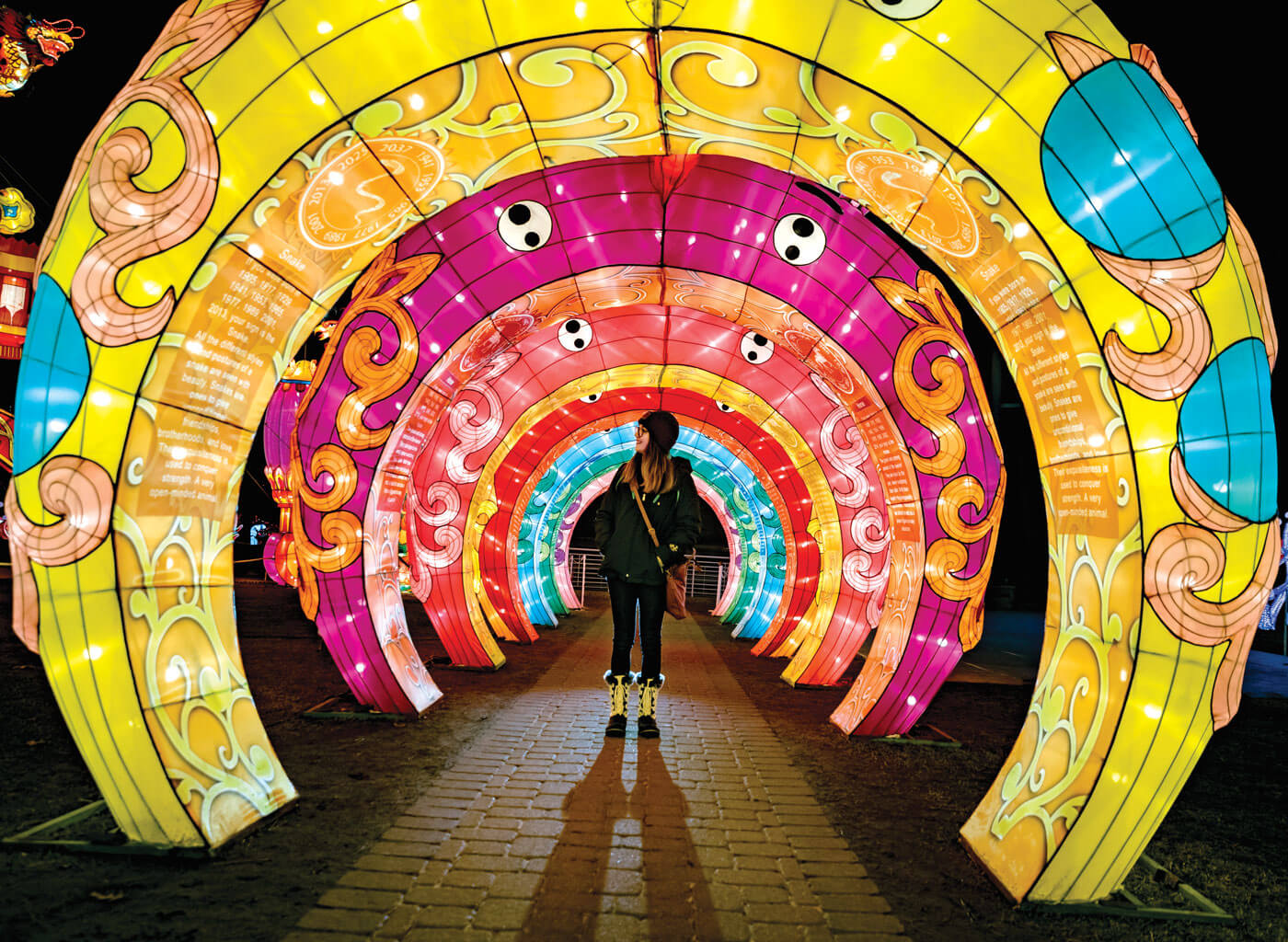 Inside the Chinese zodiac tunnel, the author reads about each sign. She was born in the Year of the Pig. photograph by Charles Harris

Miao smiles as he watches these spontaneous gatherings in the tunnel. For a few moments every night, he retreats to one side, away from the chatter but close enough to see inside the tunnel, and takes in all the little bursts of happiness, people experiencing joy together. It makes the three months away from his home in Zigong, China, worth it. “We always want to promote Chinese culture,” he says. “Most Western people might think China is a secret; maybe they just hear the news from CNN and BBC.”

Of course, Miao doesn’t think Westerners are unaware that China exists; he means that Chinese heritage isn’t something that North Carolinians always have access to. The lantern festival helps bridge that gap by providing tidbits of cultural information. Next to each display, a sign tells the Chinese history behind the lantern: One explains the significance of shadow play, an ancient form of theater using cut-out shapes in front of a cloth screen; another describes a legendary drum duet, “Niu Dou Hu,” which depicts a fight between a bull and a tiger. 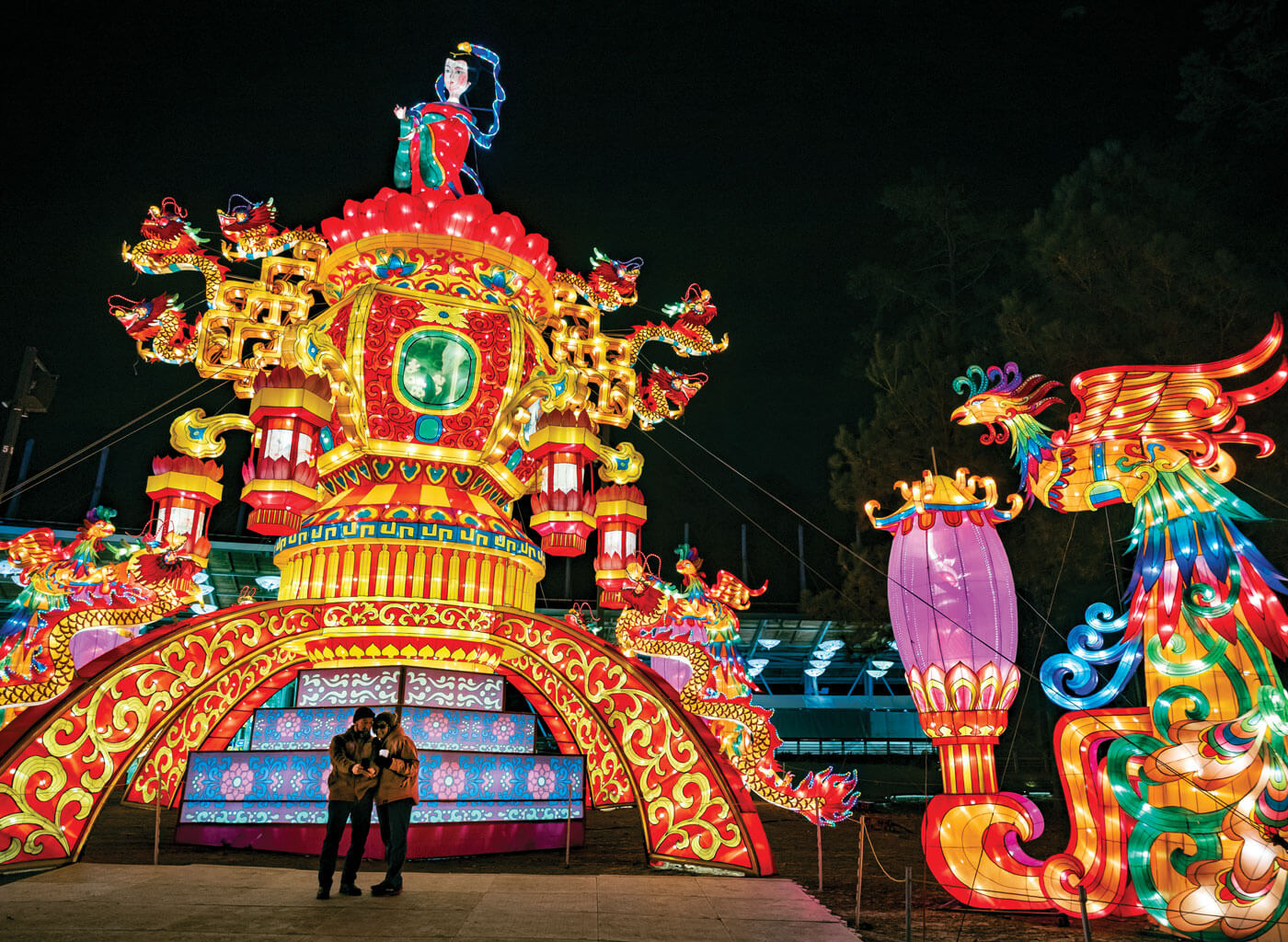 Designers begin working with the Town of Cary in July to create the festival’s annual displays. The lanterns are packaged in 20 shipping containers, sent to Wilmington on a boat from China, and then trucked to the Triangle. The journey takes about 40 days. photograph by Charles Harris

The immersive cultural experience is what festivalgoer Lisa Molina appreciates most about the event. Standing at the back of the amphitheater, blowing on cups of hot chocolate for her young sons, Nick and Mason, she describes her family’s first year at the festival: “It’s a glimpse into a culture, and it’s easily accessible, and it’s family-friendly. I think there is such value in that.”

The effect of the relatively brief cultural education that adults and children walk away with after a tour through the lanterns is well worth the five months it takes Miao and his team to put the festival together. In July, Tianyu Arts & Culture, the company that designs and builds the lanterns, starts sketching out ideas at its home base in Zigong. Every year since the first Cary event in 2015, Tianyu has created new displays for the show, which always includes a 21-foot-tall dragon. Once the show is designed and approved, about 18 artisans and six performers arrive in October — along with the lanterns — to assemble the displays. The performers stay behind to dazzle audiences two or three times a night with a 30-minute show filled with acrobatic feats. Miao remains, too, to make sure the lanterns are in working order and to serve as the group’s translator. 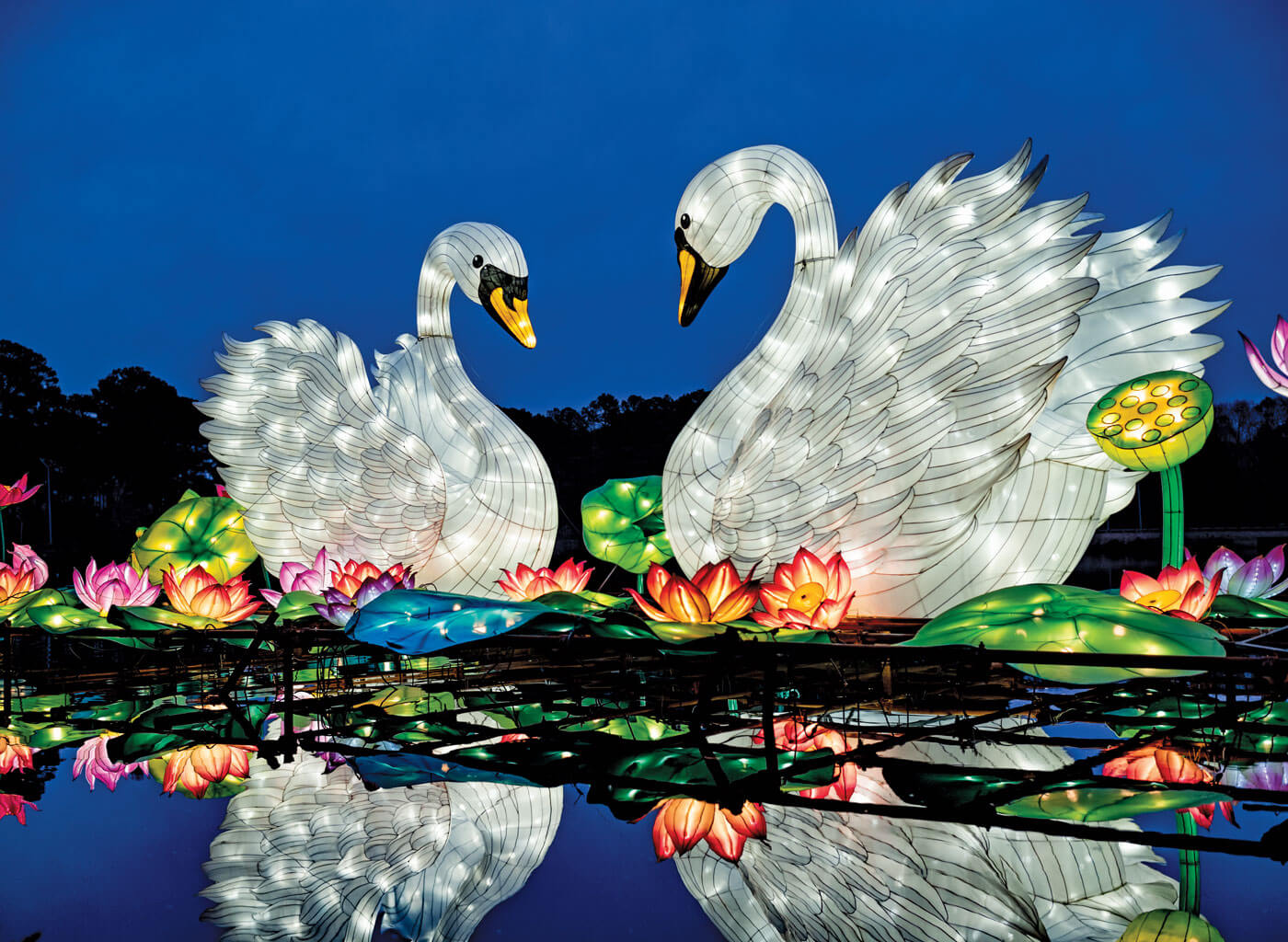 Bundled up in winter coats, Sharon Belk and her family stand in awe, looking at the dragon, which towers over Symphony Lake at the edge of the amphitheater. One of the reasons why Belk and her family decided to attend this year is that her granddaughter, Evey, kept asking about it. “The festival is bringing Chinese culture for us to enjoy,” Belk says. Now that Evey has seen the glowing lanterns, “she wants to go to China,” Belk says with a smile. A desire that makes all the effort of Miao and his silky, radiant coworkers worthwhile.