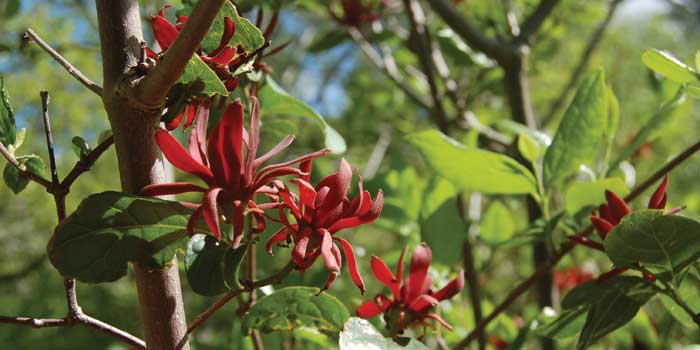 This distinctive smell signals that an eastern sweet shrub is nearby. Its deep maroon flowers blend in with the dark green leaves of the forest where it grows. But that smell makes it stand out.

There’s a misconception that our native plants don’t produce rich colors or fragrances. But as eastern sweet shrub, Calycanthus floridus, blooms throughout the mountain and Piedmont regions in April and May, it proves that plants from here can have the same qualities as those from somewhere else.

These characteristics of color and smell are likely adaptations to protect the plants from herbivores. But they also make them attractive to humans.

“Those plants become evolutionarily successful because we spread them,” says Zack Murrell, a biology professor and herbarium curator at Appalachian State University. “Their adaptation is being pretty to humans.”

At his home in Ashe County, a mile from the Blue Ridge Parkway, Murrell is surrounded by native plants. And it’s his mission to tell other people about them.

“Most people who are interested in plants have had mentors in life who hooked them on plants,” he says. For Murrell, his grandmothers inspired him first. One grew African violets and the other maintained a jungle of a yard.

Plants like eastern sweet shrub aid Murrell’s education efforts. The aesthetics are an easy sell, he says. If the plant seems interesting because it looks pretty or smells nice or brings back memories, then people want to know more.

After they fall for the smell, they listen as Murrell tells them how an unpruned eastern sweet shrub can grow 8 feet tall and 10 feet wide. Or how plants of the same variety may look different in the mountains and along the Piedmont/Coastal Plain border because of their climates. Or how the ribbon-like sweet shrub petals are called tepals because the petals and sepals look identical.

And the more they learn, the more likely they are to join Murrell in his efforts to tell others about our native plants that grow right here.

You might know the eastern sweet shrub, Calycanthus floridus, by a different name. This familiar plant has many nicknames. Eastern sweet shrub is probably the best, Murrell says, but others include sweet bubby, sweet Betsy, and Carolina allspice. Whatever you call it, it smells just as sweet.