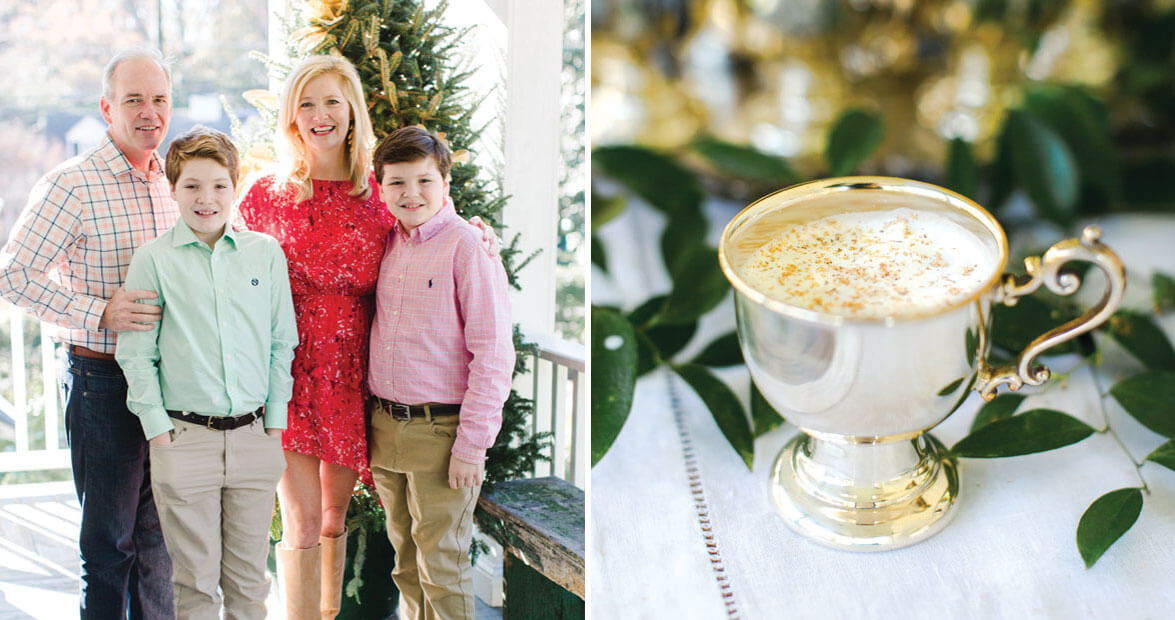 he party hasn’t started, but the guest of honor has been waiting patiently on the back porch of Jennifer Noble Kelly’s Raleigh home for weeks. Kelly’s famous eggnog, light as a cloud and frothy as a daydream, has been aging gracefully since the beginning of December, and now it’s perched on a pedestal, ensconced in a grand silver punch bowl.

One Saturday not long after Thanksgiving, feeling reasonably confident that it was cold (enough) and likely to stay that way, Kelly gathered eggs, sugar, cream, and high-quality liquor — brandy, rum, and bourbon — and fired up her KitchenAid mixer. Every year at Christmastime, she makes enough eggnog to fill a cooler, enough to last until New Year’s, enough to serve to the friends who fill her house every Sunday of Advent. In the midst of all the usual holiday hustle, Kelly and her family make a point of opening their home every weekend during the season for a post-church, midday party. Today, their house is full of energy — but not the nervous kind, because this gathering is so practiced, so easy and informal, that at this point, it just feels relaxed and fun.

Kelly floats through her kitchen, taking care of finishing touches. She’s dressed up in holiday red and cracking more eggs — this time for a frittata, because she had a last-minute notion that there might not be enough food. Turns out, she didn’t need to worry — her guests soon crowd the kitchen island with country ham biscuits and cheese and crackers and cookies and smoked trout and stuffed dates and apple crisp and pear salad. But Kelly, who’s devoted her career as a restaurant publicist to spreading the word about the best meals in North Carolina, will always prepare a little extra. Because this, for her, is Christmas: welcoming friends, making sure everyone’s fed, and ladling out good cheer by the brimming glassful.

The eggnog itself, it must be said, is deceptively filling. “It’s got this backbone of being a full meal,” Kelly says. “A little goes a long way.” A cupful is boozy but also fortifying; every batch has all the protein and substance of 18 eggs. She pours the finished nog straight into a cooler and lugs it onto the porch, where it ages for as long as it lasts.

A batch is boozy but also fortifying, with all the protein and substance of 18 eggs.

Kelly grew up with porch nog, so that’s what she’s always made. As a young adult in Greenville, South Carolina, she spent most Christmas Eves at the home of one of her closest friends — now the godfather of her younger son, Noble. “As soon as you walked in the door,” she says, “his father would descend to the basement and emerge with this cocktail. There was such a mystique.” 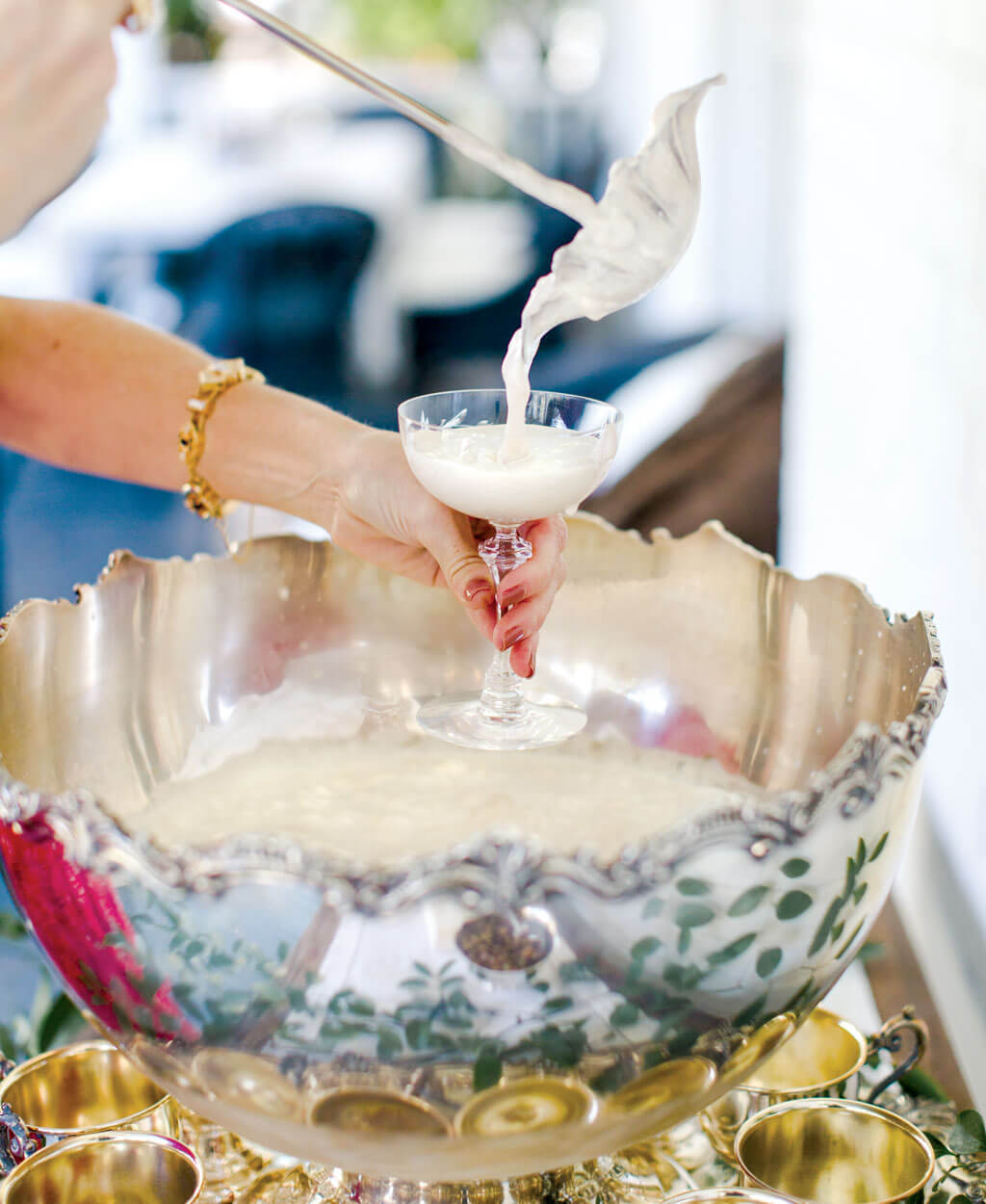 John and Jennifer Kelly host gatherings throughout December so that their sons can say their Advent prayers with family friends. The eggnog is a bonus. photograph by Anagram Photo

It became such a familiar routine that Kelly could not imagine the holidays without it. She could take or leave other seasonal sweets. But it just wasn’t Christmas without that eggnog.

She begged her friend’s parents for the recipe. For years, they wouldn’t budge — it was a family secret. Until, finally, the time was right to share it: as a wedding gift to Kelly when she married her husband, John. Together, the couple has taken up the holiday mantle and done the tradition proud. Now, people count on Kelly to make the eggnog, and they know where to find it — alongside a ladle, nutmeg, and a grater — all season long.

At the Advent Sunday parties, the eggnog is transferred into the silver punch bowl, a gift from her mother, to be served in elegant coupe glasses that were a wedding gift to John’s grandma — a presentation as lovely and heartfelt as the drink itself. “It is a cocktail,” Kelly says, “but it’s way too special to put in a plastic cup.”

Not everyone drinks the eggnog, of course. Many of the party guests are too young, and a few in the over-21 crowd think they don’t like it. That’s because they’re used to the heavy, syrupy, store-bought variety. They haven’t had the real thing, Kelly says. This is the old-fashioned stuff: “It’s like a milk punch with this big head of snow.”

This is the old-fashioned stuff: “It’s like a milk punch with this big head of snow.”

Whether or not they partake, the eggnog has become the backdrop for a tradition that the Kellys share with about 15 to 20 friends and their children, who filter in after church for a quick lunch together before heading out to the golf course or the mall or the theater for a performance of The Nutcracker. The important thing, Kelly says, is that built-in quality time. “Otherwise, you can go through the season and not see people you care about.” 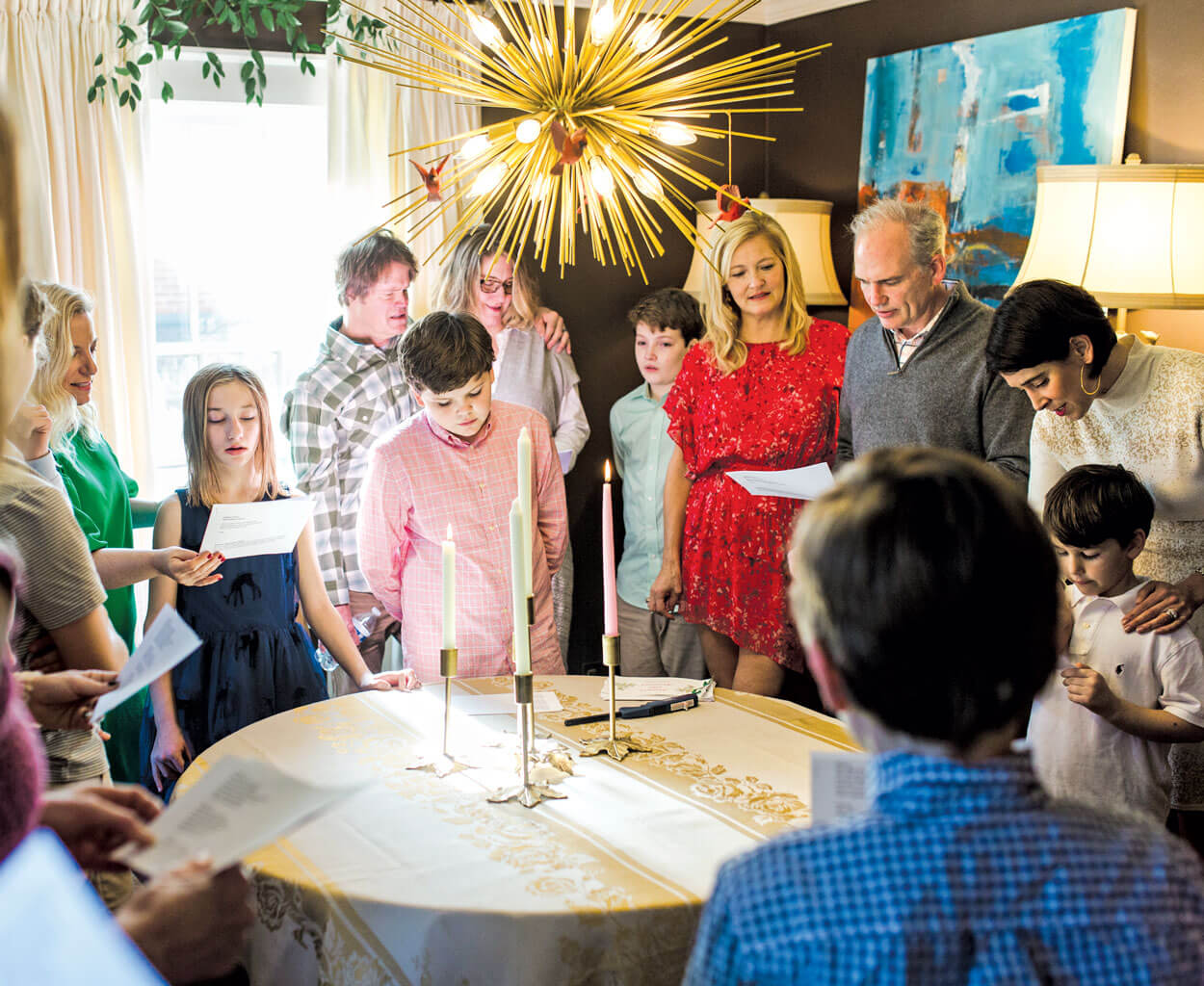 The Advent celebration centers on the children: Every week, a different child lights the candles and reads a Bible passage. photograph by Anagram Photo

At the heart of the Sunday get-togethers are Noble, 11, and his brother, Worth, 13. With no extended family in town to help them celebrate the season, the Kellys began gathering with friends they’ve known since the boys were in preschool. Five years in, Kelly finds that the key is keeping things casual — people drop in when they can and stay as long as they’re able.

“Our lives are changing,” Kelly says, “but I figure if we can do this as many Sundays as possible, we’ll see the people we want to see.”

It’s a typical December day in Raleigh, which means that it’s 60 degrees and sunny, with not a trace of snow on the ground or in the sky. (Just one fluffy layer atop the eggnog.) All the better for wandering out onto the expansive porch and lingering around the nog bowl, where clusters of friends catch up, discuss holiday plans, and chat about Christmas shopping. From up here, they can look down into the backyard, where their children — still dressed in church khakis and twirly dresses — tear across the grass and bounce on the Kellys’ trampoline.

Soon, someone will call out, “All right, we’re gonna do Advent now!” and the group will migrate into the dining room, huddling around the Advent candles. Someone will say a prayer. They’ll all sing “Silent Night” — a quiet moment of togetherness before they head back out into the busiest season.

On the porch, the eggnog awaits a new weekend, growing richer, deeper — better — with time.

Jennifer Noble Kelly’s eggnog recipe is a closely guarded secret — but we have the next best thing!