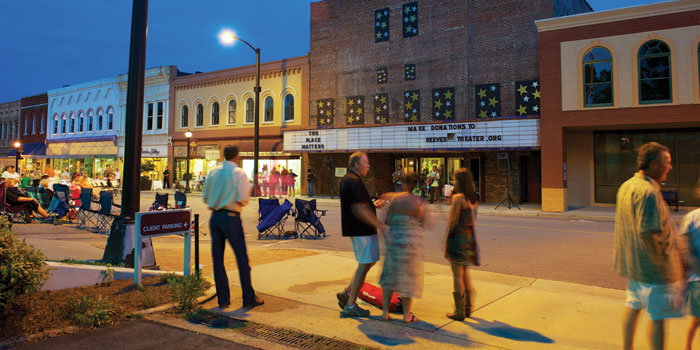 Editor’s Note: This article was originally published in August 2012.

Like many small downtowns, Elkin experienced an exodus in recent decades. But here, the space left behind has become an artist’s canvas. No, scratch that. Ball is uncomfortable with the title of artist. She’s not classically trained. Her public art project, Aesthetic Installations, is her interpretation of community service. Ball — a stylish woman with a penchant for scarves — calls herself a “creative domesticator.” She takes neglected public spaces and makes them feel intimate again.

Ball left Elkin, a small town with a population of about 4,000, after high school to pursue a corporate career, but she returned a few years ago to raise her family. She was in Elkin when the town’s most visible icon — the Hugh Chatham Memorial Bridge, circa 1931 — was torn down due to safety concerns. After the bridge’s 2010 demolition, Ball, like many Elkin residents, made a pilgrimage to the site to collect debris. She gathered small chunks of concrete and slender pieces of rebar. The materials provided fodder for her first installation, a window dressing of rubble displayed in apothecary jars. She paired them with an old typewriter. The display seemed to taunt residents: History has been written. Where will Elkin go from here?

Sometimes, Ball’s installations look like museum dioramas. Other times, they appear as vintage storefronts. But most people know her for her string-held displays, which fill windows with flurries of colorful paper the size of Post-it notes. You never know where, or when, one of her creations might spring up. Even inhabited office buildings, if they’re not using their window space, have the potential to become galleries.

“I want to build awareness of possibilities,” she says. “We can work with what we’ve got.”

She tries to illustrate that sentiment through her work, which includes everyday items. She recently put together a project made of tissue and office scraps. Last quarter, her Elkin installations included 9,600 pieces of paper, all strung by hand with needle and thread. “You never know what you’re getting into when you start these things,” Ball says. “They tend to evolve.”

Her boot heels click as she walks past an Elkin antiques store. Apple blossoms fall like snowflakes into the open mouths of cedar chests displayed on the sidewalk. She pauses every few feet to wave at neighbors as she makes her way to an unexpectedly up-and-coming part of town — the alleyway behind Main Street. Now that the bridge is gone, the alley is the first thing visitors see coming into town. And that inspired Ball’s friend and neighbor, Anne Gulley, to undertake a beautification project of her own.

Gulley is transforming the area with paint — magnolia creams, spring greens, subdued reds. She plans to blanket the whole place in cheerful shades. Ball hops over repurposed railroad ties and points out Gulley’s work. “These are just private citizens, regular people,” Ball says of Gulley and her crew. “People are starting to say, ‘We’ve got to make it better.’”

She fixates on tiny lettering at the bottom of the wooden board. It’s the sort of detail that is easy to miss if you aren’t paying attention. And that’s half the point. The quote is courtesy of Henry Miller: We live at the edge of the miraculous.

Warehouse for the future

When Joe Seipel-Parks opens the barn doors of Elkin’s Liberty Warehouse, cast-iron runners grind like a train traveling rusty tracks. He blinks at the flood of daylight. “Ah, feel that breeze,” he says. The Liberty’s floors are freshly sanded. Velveteen sawdust swirls as fresh air filters in.

The warehouse, which is being renovated under Seipel-Parks’s architectural guidance, started out as a tobacco distribution center around 1919, but the bank foreclosed soon after it opened. It was later used as a cash-and-carry business, which stored bags of sugar and flour in the structure’s large, open rafters. The rest of the building’s history is a little muddled. What Seipel-Parks knows for sure is that one Elkin family has a particularly strong connection to it. When his client, Cicely McCulloch, went to research the deed for the property, she unexpectedly discovered that her great-grandmother once owned the building.

Seipel-Parks — an amiable man with a bushy, red beard — grew up in Elkin, but he left to attend Savannah College of Art and Design in Georgia. “When I went to college, I stayed gone,” he says. “I wasn’t one of those kids who came home on the weekends.” But after he and his high school sweetheart, Kimberly, had their first child, they moved back to Elkin, drawn by the town’s renowned school system.

“We wanted to live downtown because I had a vision for Elkin,” he says. He saw potential for an active, urban-style center softened through a small-town lens. “At the time, I didn’t know that there were others, like Cicely, who shared that vision,” he says.

McCulloch and Seipel-Parks designed a Liberty renovation that will support a restaurant, wine shop, reception hall, and microbrewery. “I can’t believe I get to do this sort of work in my hometown,” Seipel-Parks says.

When the electric lines are installed and leases are signed, the Liberty’s windows will share light from the inside out. Seipel-Parks and lots of like-minded Elkin citizens hope this might happen for all the vacant buildings in Elkin, even the large ones left behind by the town’s faded textile industry. Slowly, the dream is coming true.

The Reeves Theater, another of Seipel-Parks’s downtown projects, is an Art Deco building with boarded-up windows. But it’s clear that the boards weren’t haphazardly installed. Someone carefully covered them in golden stars. A well-tended matinee sign screams: This place matters!

A few years ago, when the theater was on the verge of being torn down, a group of citizens created the Reeves Theater Restoration Board to save the structure. It’s now stripped to its bones. Yellow construction lights hang above the old, steel rafters that once held a movie projector.

When Seipel-Parks walks through the Reeves to survey its current state, he runs into Gary Maxey, a board member who is preparing for an upcoming bluegrass fund-raiser. There’s also a visual art exhibition in the works.

“I think it has a very inner-city feel as it is now,” Maxey says of the Reeves. He dramatically throws out his hands and declares: “It’s the sort of place that inspires people to say, ‘Just give us a big, empty loft, and we’ll fill it with art.’ Because when there’s art, a place begins to really belong to people again.”

In the late 1990s, Matthew Mayberry noticed an uptick in regional winery openings. The Elkin native instinctively believed the industry was going to play a major role in the future of the region, but it wasn’t until 2005 that he understood what his role in this developing scene would be. The epiphany came suddenly and unexpectedly: He and his wife should open a downtown winery.

Within seconds, he knew whom they would consult, where they would center their operations. The winery, without land of its own, would purchase all of its grapes from within a 12-mile radius of town. Mayberry calls this his “shazam moment.” He’d been waiting for one of these all his life. He was nearly 80 years old when it came.

He needed to coax the rest of the family to join him. The last to make the leap was his wife, Ann, who hadn’t expected to run a start-up business in her 80s. But then she recalled her grandfather, who operated a canning business in the building her husband wanted to use as the winery. She knew her grandfather would have loved this idea.

The vision came to fruition in the form of Brushy Mountain Winery, located just a few doors down from the Reeves Theater. This afternoon, Mayberry sits in a rocking chair, not on a laze-away-the-day front porch, but in the middle of his own public wine-tasting room. “I was sort of drifting into the sunset, getting more bored with things,” he says. “But then I got the shazam, and we got active. We’ve been able to give back to the community.”

Mayberry’s previous career as a geologist often required professional stints far from home, but no matter where he’s been, his favorite place on earth has always been what’s now known as the wine country of North Carolina. He pushes his chair back and forth against Brushy Mountain’s hand-knotted rugs. “Whenever we came home, I could feel myself being put back together from the stressful life I was living,” he says. “It’s like the place made me whole again. Elkin never felt like a sleepy, backward town to me. We’ve always been progressive, and I think we still are.”

He uses a cane to get around these days, but Mayberry never has trouble finding helpers to work his stemming-and-crushing machinery or to lift the oak barrels in the basement. Jason Wiseman is the winemaker, and a local artist, Erik Dahlager, is an all-around helper. Today, Dahlager refills barrels. Their porous, wooden innards soak up so much liquid that winemakers periodically transfer the wine from a stainless-steel drum to supplement the process.

Dahlager, a laid-back guy with shaggy hair, shows up wearing sunglasses on top of his head. He immediately bounds downstairs, into the basement, where Ann’s grandfather once sealed blackberries in metal jars. Brushy Mountain Winery sometimes corks the same fruit, harvested from the same fields, into glass bottles.

Dahlager fills a chemist’s flask with chardonnay and tops off a French oak barrel. Brushy Mountain’s bartender, Tommie Ann Tulbert, comes down to watch. Dahlager pours her a glass of the young wine, which she savors.

“Sometimes, I taste a hint of Granny Smith apples in our wines,” Tulbert says. “Everybody tastes something different. I’ve had people think they could taste tobacco.”

Dahlager believes it’s a curious nod to the region’s agricultural heritage. “There is some acidity in the soil here,” he says. “Maybe that’s what they’re tasting. A lot of people talk about how earthy our wines are.”

Some visitors’ palates gravitate toward the crisp sweetness of fruit, while others seem more inclined to focus on the musk of oak and tobacco. But everyone is surprised that Brushy Mountain’s award-winning wine is produced in this brick-walled basement.

“I always tell people the vineyard’s on the roof,” Dahlager says.

“I always tell them it’s in the parking lot,” Tulbert says.

In fact, a few grapevines do cluster around the back door in the alley from time to time.

“There always seem to be some seeds that get away from us,” Dahlager says.

It’s odd to see a grapevine growing in town. But Dahlager explains it nicely. Some seeds drift. Elkin residents have seen vines sprouting more than a block away, proving that even the most wayward seeds succumb to the impulse to create. They take root where they land, and then, they start to grow.

5 things not to miss in Elkin

Leigh Ann Henion is a freelance writer in Boone. Find more of her archived stories here.