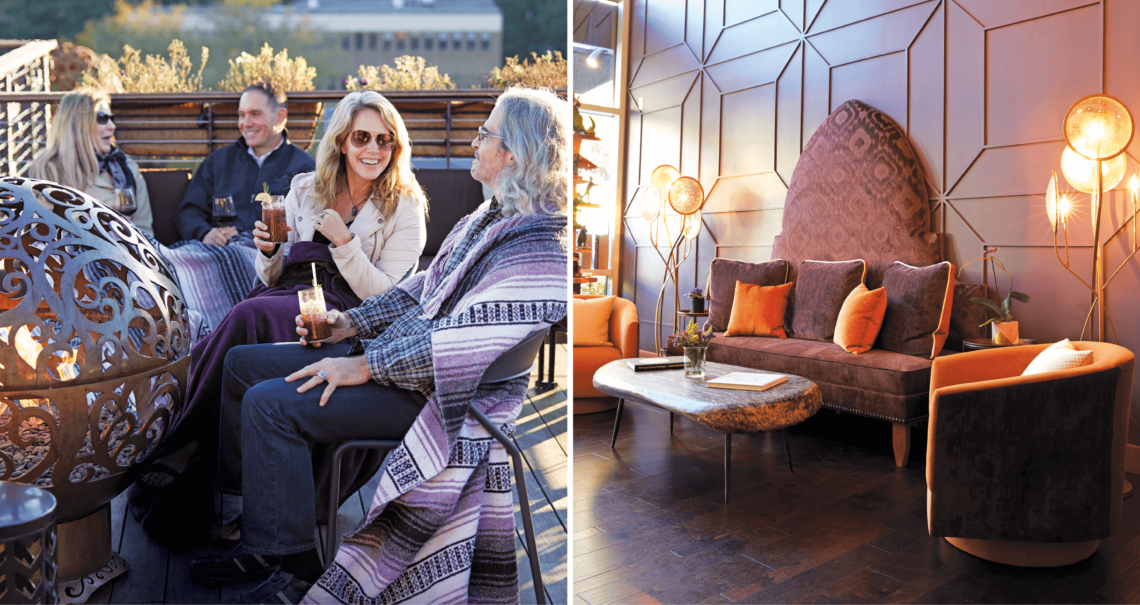 The average annual snowfall in North Carolina is five inches. Boone, on the western edge of the state, gets nearly three feet each year between the end of Appalachian State University’s football season and the start of spring hiking at nearby Grandfather Mountain. Instead of hunkering down at home this winter, though, many locals and visitors will gather on the roof of The Horton Hotel, the city’s first boutique inn. Bundled in woven purple blankets and armed with seasonal cocktails like the appropriately named “Damn the Weather,” those who cluster around The Horton’s custom-designed firepit can enjoy a view available nowhere else in Boone: a sprawling mountain vista, drifts of snow on Howard Knob, and bell towers and steeples scattered around a downtown that’s evolving into a destination for vacationers from across the Southeast.

“Boone is really a year-round town now,” says Fulton Lovin, a property owner who opened The Horton with his wife, Denise, in February 2019. “It didn’t used to be, but now it’s a great home base for all kinds of winter activities — skiing, snowshoeing, hiking. And we want to be the cozy headquarters for all those adventures.”

The Lovins are betting that Boone, best known for its football crowds and bluegrass music, can draw travelers craving both the exhilaration of the great outdoors and the sophistication of a nice hotel. Inside The Horton’s 15 guest rooms, tucked into a 1920s building that began life as a Studebaker dealership, are luxuries like a cast-iron tub and locally made chocolates, lotions, and soaps. 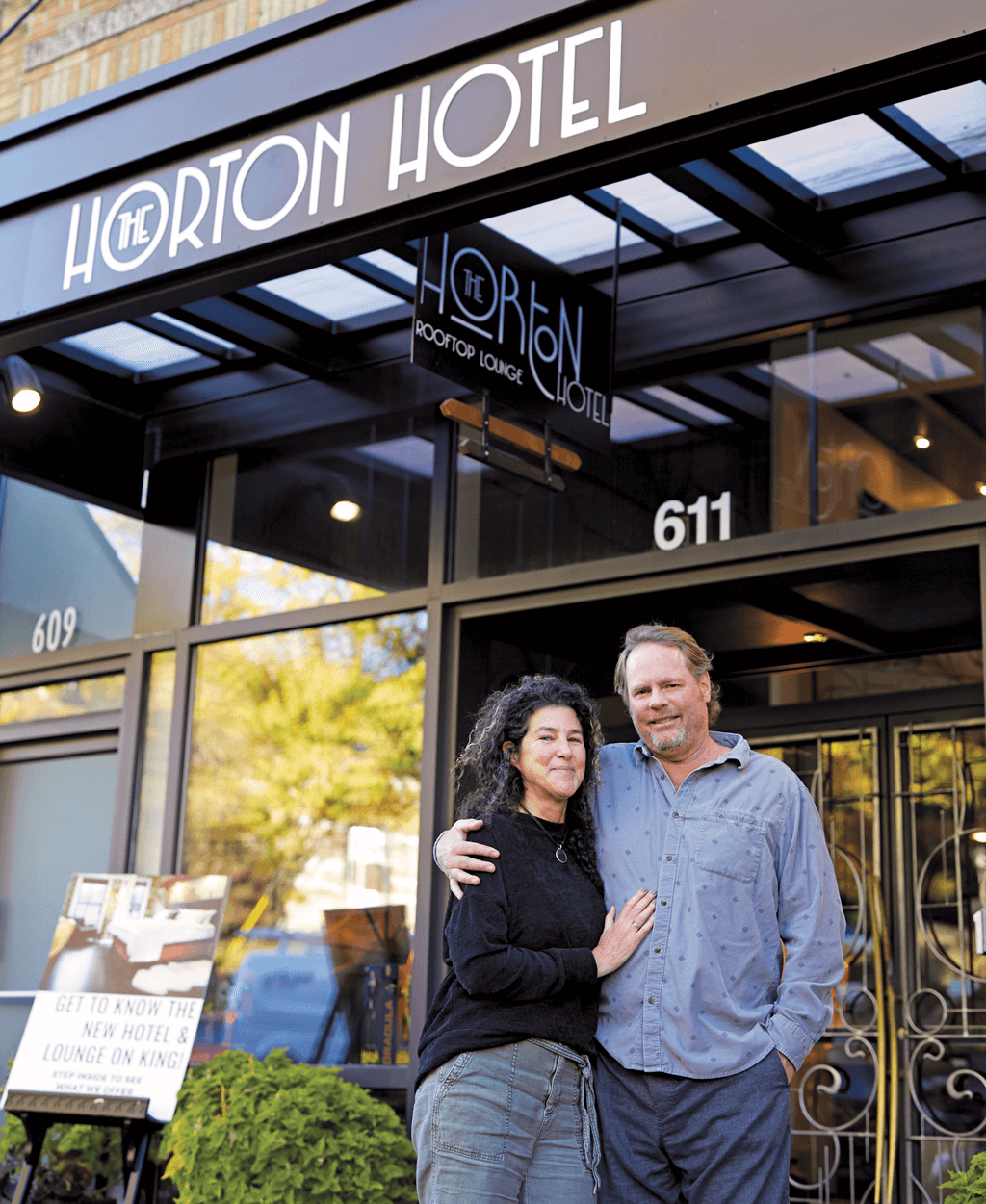 It’s an unlikely venture for the Lovins. While they’ve rented out vacation properties and event venues in the area, “We were never the kind of couple that would sit around and dream about owning a hotel,” says Denise, a psychologist who came to Boone in the 1990s for a position at App State, and who still maintains a private practice in town. Soon after her arrival, she met Fulton, who moved to Boone as an App State freshman in 1977 and never left. “I’m like a box turtle — they only go about a hundred yards in their whole lives,” he says. “But I roam those hundred yards in downtown Boone all the time.”

Over the decades, Fulton had seen the closure of many beloved local businesses, like Farmers Hardware and the original Boone Drug downtown. A few years ago, one building caught his eye: an elegant brick storefront on King Street, built in 1929 by Henry Walter Horton, whose ancestors were among the first settlers of Watauga County. After the Studebaker dealership went bust, tenants included a Spainhour’s department store and, in more recent years, an upscale art mall. Fulton fell in love with the building and its history. At the time, efforts were underway to restore the nearby Appalachian Theatre as a film and performance venue. (It reopened in October.) The moment was right for someone to create a downtown gathering place that would be an addition to King Street’s student watering holes, with accommodations for visitors who wanted to walk to the theater, App State’s campus, and the growing number of Boone businesses that cater to a more mature clientele. “For many decades, Boone was just considered a student town,” Fulton says. “Now, there are so many second homes in the area, and it’s become a vacation destination. There’s much more here than just the university.”

During the nearly two-year renovation of the building, the Lovins found a photo of H.W. Horton riding a horse during Boone’s 1949 centennial celebration. A large version now appears in The Horton’s lobby, and local artist Wes Waugh distilled the image into a sketch — modeled on John Lennon’s scribble drawings — to use as The Horton Hotel logo. It appears throughout the building, on items ranging from copper wall panels and cocktail napkins to plush robes and headboards. “If we were going to do something with this building, we wanted to make it meaningful,” Denise says. “We wanted to make sure that everything was relevant and grounded in the history of the building, downtown Boone, and also the Horton family.”

Economic development often erases the past, but history is everywhere at The Horton. As a crew excavated the building’s basement to make room for the elevator shaft, workers turned up a stash of Studebaker parts; those parts are now mounted in the lobby lounge as art. Black-and-white photo murals capture the history of local landmarks like the Daniel Boone Hotel, the city’s previous downtown hotel, demolished in the ’80s.

“If we were going to do something with this building, we wanted to make it meaningful.”

The guest rooms, though, are all about contemporary comforts. Fulton, who chose to follow his own instinct rather than take the advice of design professionals, outfitted each floor with a different aesthetic in mind. Below the lobby and lounge, a lower level offers pet-friendly rooms with slate floors. The upper levels are home to rooms and suites featuring exotic wood slabs as headboards and vanities; vintage-style chandeliers; exposed brick walls; and sheepskin rugs at the bedside. The effect expresses the Lovins’ view of what Boone is, and what it can be — a mix of rustic and modern, natural and crafted.

The Horton also reflects the tastes of the online community that Denise cultivated on the hotel’s social media accounts long before the doors opened in February. As a psychologist, she wanted to “build empathy and relationships and connection.” She conducted Facebook polls, asking the public to vote on everything from the lotion and chocolates in the guest rooms to the plates and glassware in the lounge and bar. “People responded so positively,” Denise says. “Now, they walk through our doors and say, ‘We helped make that decision!’” 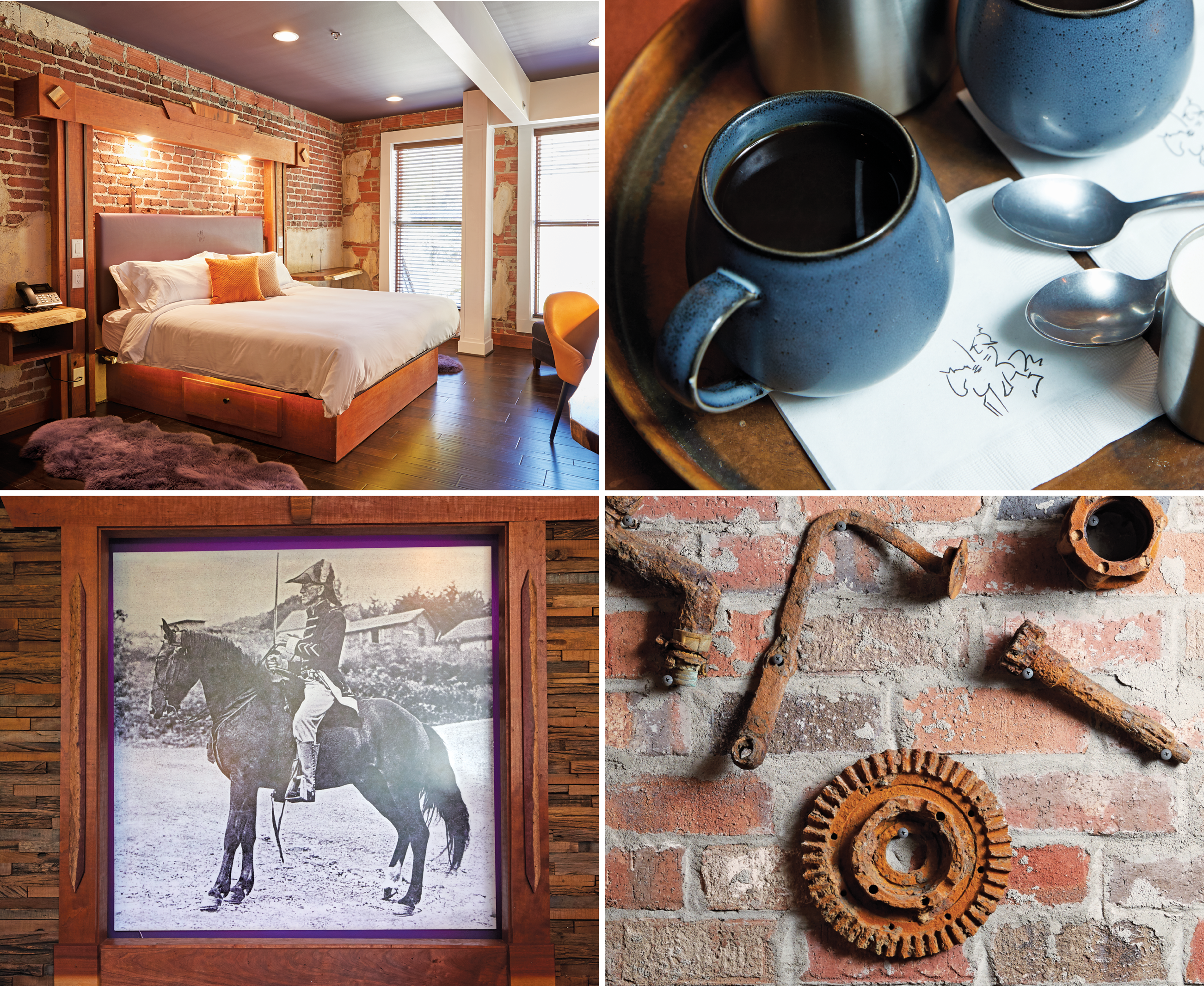 Clockwise from top left: A luxury suite; a cup of French press coffee for guests; old Studebaker parts as wall art; a photo of H.W. Horton in 1949. photographs by Jon Black

The Horton engages its clientele in other ways, too, like hosting local artists and small businesses for pop-up events in the lounge. Guests who want to experience Boone like the residents do can join Fulton on weekend hikes that follow a trail system above the university’s football stadium. The route is especially beautiful in winter. “With the leaves off the trees, you can see longer-range views, and the sun is so bright when there’s snow on the ground,” he says. “All that light is good for you in the winter.”

The Horton has become a hangout for locals, too. Last March, the Lovins hosted a slumber party for the community, complete with candy, cocktails, and games, and they plan to repeat the event this year. And although the hotel doesn’t have a full dinner menu yet, it offers small dishes such as North Carolina buffalo burrata served alongside a Booneshine Brewing Company Trail Magic IPA. Cocktails like “The First Fire,” a creamy scotch-and-honey concoction, are served on the rooftop, where two firepits, designed by the Minnesota artist Eva Asplin, will be burning all season.

“Even when it’s really cold, you can pop out on the roof for a while and watch the sunset,” Denise says. “You can snuggle up in a blanket and talk around the fire and see the snow fall on the mountains. What’s cozier than that?”