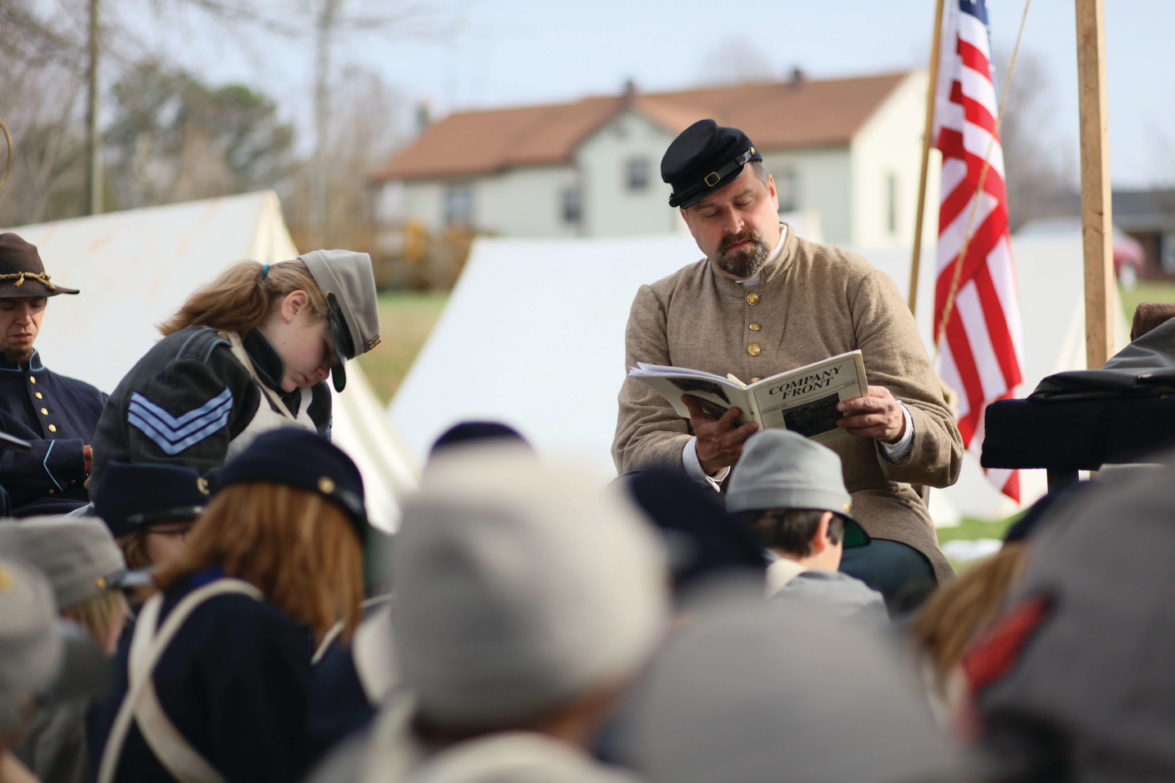 Standing head and shoulders above the 11-year-olds around him, Marshall looks left and right, taking a quick inspection of the troops. Wearing a Confederate soldier’s sack coat and a kepi that tilts slightly over his right eye, he looks very much the part of the lieutenant he’s portraying.

It’s the second day of Camp London. He is in character and so is every single fifth grader at London Elementary School in Walnut Cove — all of them transformed into members of the 26th North Carolina Regiment, ready to march into battle at Gettysburg.

Camp London is Eric Marshall’s response to every kid who ever complained that history is boring.
“It just riles me up to hear that,” he says. “I hate to hear it because I know it doesn’t have to be true.”

Each spring, Marshall — along with help from fellow fifth-grade teachers James Boyles and Mary Carder and support from parent volunteers and school administration — stages a world where London’s fifth graders step right into the shoes of a Civil War soldier.

He transforms a field next to the playground at London Elementary into a living Civil War camp, with no detail left to chance.

At the lower end of camp, a large covered wagon and a three-quarter-size replica of a cannon that shoots a puff of flour are pulled in. Positioned at the upper end is a wagon holding wooden cutout rifles that were made for camp by a middle school shop class. In between, 11 canvas tents of varying sizes rise from the ground, tied down with rope and wooden stakes.

Cast-iron skillets and cooking utensils dangle from hooks around the fire ring, and a bugle hangs from the tent pole at the command tent.

Into this setting, the students march, leaving behind a normal school day, wearing their own blue and gray Civil War coats and kepis, with haversacks and canteens strapped over their shoulders. They come prepared to be outside for three days of reenactments, history lessons, and a journey back in time that will linger with them much longer than their remaining days in elementary school.

The Camp London experience caps several weeks of classroom study on the Civil War. Students have learned about the events leading up to the war and studied various battles. They have talked about slavery, and they have met the war’s key players.

During camp, those lessons come to life.

Here, the students sign in and take the soldier’s oath. They learn about everything from Civil War-era money to the letters that soldiers wrote home. During a lesson on food, they taste something called hardtack — a thick, tough, salty cracker that was a staple for soldiers on the march.

“We have lessons on what the soldiers’ lives were like, what they carried into battle, and how they survived,” Marshall says. “The kids keep journals on what they experience during camp.”

They see Civil War-era weapons and uniforms, courtesy of the North Carolina Museum of History, where Marshall’s brother, Jackson, is a historian. They hear the boom and watch the cloud of smoke rise from the end of a rifle during a powder-only firing demonstration.

Marshall, who came to teaching 12 years ago in his mid-30s following a career in jewelry sales, knew this type of experience has a place in education.

“I knew from the minute I started teaching that I wanted to do this,” he says.
During camp, Marshall does it all. In between teaching a history lesson on Civil War artifacts and showing the cannon crew how to load, he’s tightening the skins on the drums and playing the banjo. During a lesson on Civil War music, he teaches the kids the words to the song “Goober Peas,” a funny favorite among Confederate soldiers and 21st-century fifth graders.

He divides his time between the role of teacher and the role of lieutenant — whatever the scene needs.

He picked up most of the knowledge as a member of the Society for the Historical Preservation of the 26th Regiment North Carolina Troops. This 26th North Carolina Regiment is one of the largest reenactment units in the state. Since joining the group in 1990, Marshall has participated in reenactments around the state and at other key Civil War battle locations around the country.

“I really see reenacting as an extension of teaching,” he says. “I like dealing with the public, and I like talking about what we’re doing or why we’re dressed the way we are.”

What really makes Camp London work, Marshall says, is not what he does but what the students do. Each student has a job, a role in camp — roles they take seriously.

In the weeks and months prior to camp, students try out to be adjutants, field sergeants, drummers, provosts marshal, cannon crew, and surgeons. Once selected, they study what those soldiers did and what their responsibilities were. They practice during recess and after school so that when camp rolls around, they are well-versed in those jobs.

“Students are underestimated all the time,” says Marshall, who was the Stokes County Teacher of the Year in 2005-2006. “They are completely capable of putting themselves in someone else’s skin. It amazes me.

“And fifth grade is the perfect age for this,” he continues. “They are old enough to understand the lessons, but they still have enough imagination to make it work. If we’re doing a reenactment, and I say there’s an enemy in the woods, they can see it. They can feel it as surely as if it were real.”

Two flags, representing the 24th Michigan Infantry, wave in the wind across a battlefield. They are held by two fathers who’ve been conscripted into duty. The 26th North Carolina faced the 24th Michigan during the first day of fighting at the Battle of Gettysburg.

Fifth grader Ashlee Lyons is far behind Marshall and the front line. With a drum strapped over her gray coat, she waits for the drum captain to issue his orders.

She also knows what all the other fifth graders know from their classroom lessons: This day they are reenacting — July 1, 1863 — was a difficult day for the 26th North Carolina. She knows that Col. Henry Burgwyn, the brigade’s leader, was killed in action. She learned that the North Carolina flag fell to the ground 14 times as the young soldiers carrying it were wounded or killed. And she knows that the 26th returned to camp at day’s end with less than one-third of its original 800 soldiers.

And although she’s learned all this from textbooks, for the next 15 minutes on this imaginary battlefield, she will live it, thanks to Marshall.

He issues his next command, “Forward march!”

On cue, the students move in unison, shoulder-to-shoulder, falling into the familiar formation they’ve been practicing in the hallways and at recess for weeks.

They hear the drums behind them, pushing them into battle.

The front line of soldiers responds in unison with a hearty “Boom!” before lowering their wooden cutout rifles to “reload.”

They see the Michigan flags getting closer, and they watch the North Carolina flag fall and rise and fall again, all 14 times.

Many of them feel a tap from Marshall on their shoulders, a signal that they’ve been wounded and should fall to the ground.

But they push toward the flags of the 24th Michigan, recreating the scene that played out at Gettysburg some 140 years ago.

How we got here

It only takes a minute in Eric Marshall’s classroom to realize that he’s a history buff.

Amid the tools of his trade — the shelves of textbooks, stacks of papers waiting to be graded, a white erase board listing the evening’s homework — the evidence is everywhere.

Overhead, World War II model airplanes swoop from the ceiling. The 13 stars and stripes of a Betsy Ross flag hang near the front of the room. A framed print depicting Washington and his generals near the end of the Revolutionary War adorns the wall beside a glass case that’s home to both blue and gray Civil War coats.

He comes by it honestly.

“My earliest memories were of huge Marshall family reunions where lots of family members were willing to talk about our family history,” he says. “There were always lots of stories.”

Living today in his grandparents’ house on his great-grandparents’ farm in Forsyth County, Marshall relishes those stories and the sense of connection they provide. He wants his students to experience that as well. He encourages them to talk to older family members and ask them about the past.

He wants his students to understand that America is a unique place, one where nearly everyone came from somewhere else.

“You are here because your people survived who knows what to get here,” he says he tells them. “The blood in your veins is tied to people who are oceans away. Why did they come here? Why did you end up in an elementary school in Walnut Cove and not in a school in Scotland or Africa, or somewhere else?”

“I want them to think about the fact that in a lot of their families, someone sat around a dinner table and said, ‘We’re leaving,’ ” he continues. “In other cases, people came here not by their own choice. What are those stories? How did they play out?”

“Company, halt!” Marshall calls out, as the 26th North Carolina and 24th Michigan come within 20 yards of each other, just as they did that day at Gettysburg.

As the noise dies down and the drumming stops, Marshall motions for the students still standing to turn and look behind them. In near silence, they see what occurred during their forward march. They see the battlefield littered with wounded soldiers. They see that the number of injured and dead is far greater than the number left standing. They watch as an out-numbered hospital crew tries to help as many people as possible.

Right then, something clicks for the students. Marshall sees it in their faces and hears it in their voices when they talk about it later. He reads it in their journals.

“It’s one of those chilling moments when the kids turn to look because I’m able to tell them that the view was the same on both sides,” he says. “Regardless of the politics, regardless of the blue or the gray, these soldiers were all Americans, and the tragedy is that what they saw as they left the battlefield was the same, North or South.”