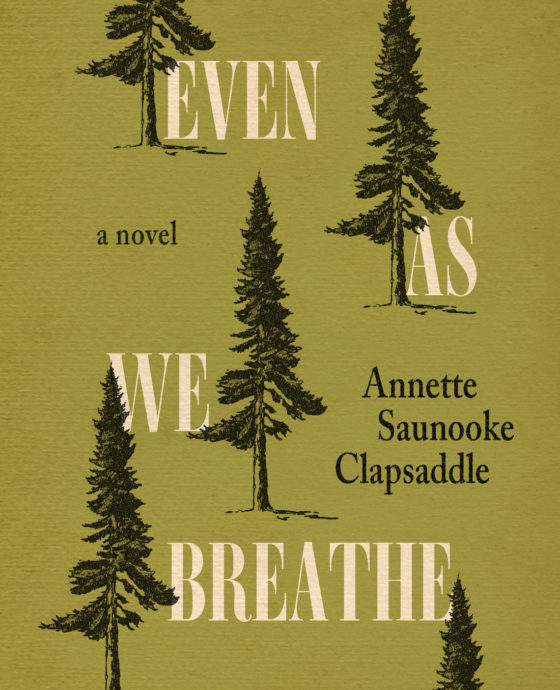 Annette Saunooke Clapsaddle is the first member of the Eastern Band of Cherokee Indians to publish a novel, but she didn’t set out to write Even As We Breathe to earn recognition. When Clapsaddle learned that the Grove Park Inn in Asheville was used to house prisoners of war during World War II, she saw an opportunity to write about themes of citizenship, sovereignty, and identity from the perspective of a Cherokee protagonist.

Even As We Breathe follows Cowney Sequoyah, a young man living on the Qualla Boundary in western North Carolina. In 1942, Cowney takes a job at the grand Grove Park Inn in an effort to separate himself from his homeland. Meanwhile, Grove Park has become a temporary home for Axis diplomats who are being held as prisoners of war. When one of the diplomats’ daughters goes missing, Cowney becomes a suspect.

Clapsaddle hopes that the book will serve as a reminder that communities have “far more in common than we have different,” she says. “I hope North Carolina readers can start to think of Cherokee people in our state not only as part of our state’s history, but also as part of our state’s modern, complex legal and political structures.”

How does the theme of identity play out in Even As We Breathe?

Clapsaddle: For this one, the theme of identity was so important. Even though Cherokee is fairly close to Asheville, I think the communities — especially during 1942 — were very different, they were very isolated from each other. The issues a person who was Cherokee would have regarding race aren’t just issues of racial discrimination, which my main character would face when going to Asheville, but it’s also a cultural misunderstanding. It’s which public places a Cherokee person could go into and also a misconception over who has rights to land and how property was bought as well: How can someone buy property that was native land, stolen native land to begin with? Also, because there’s a bone involved in the book, issues of how the body is thought of and what is valued in a life — the spirit is something that is the most important thing in Cherokee culture and is more of a defining factor than skin color — comes up.

Did you have a specific audience in mind when you wrote this book?

Clapsaddle: I didn’t have a specific audience in mind. In terms of the voice of my protagonist, the audience of that voice was a young person anywhere from the ’90s to the 2020. I anticipated that readers could be anyone. I think of my high schoolers a lot and I think the book is written at a high school level.

How has the Cherokee community responded to your book?

Clapsaddle: I write for my own community and for a broader audience. I want my community to get something out of it as much or more so than someone who doesn’t know much about the Eastern bands. My community has been really supportive. The folks I have talked to have really enjoyed it. Not everyone has the same favorite part or favorite character. They have been supportive in all kinds of ways.

Why do you think it’s important for Native American characters to be represented in literature?

Clapsaddle: It is extremely important for everyone to see themselves in literature. Literature helps us examine our role in this universe and the commonalities in our universe as well. When we don’t see ourselves in literature, it doesn’t give us the full sense of our role in society. I think it’s important that Native characters and Cherokee characters are authentically portrayed because there are so many inaccurate portrayals of Native people in literature. It’s going to take us a long time to overcome that. Those stereotypes impact us every day. There are stereotypes in early American literature, and you can see those stereotypes echoed in law. It’s interesting to see how literature affects law and how that affects our everyday life. If you look back at the Indian Removal Act of 1830 that led to the Trail of Tears, there is imagery in that document that harkens back to Nathaniel Hawthorne’s The Scarlet Letter. Hawthorne talks about Natives being in the dark woods and characterizes them as red or black people. As a result, when the argument to remove the Cherokee people was made, it was presented in a way that the general American people didn’t see Indian people as vibrant, intelligent people.

What would you like readers to learn from your book?

Clapsaddle: I would encourage them to think about what truly matters when we determine who is a member of our community. And I use the term “community” broadly, whether that’s the community we live in or our state or our country. We have far more in common than we have different. When we get caught up in labeling certain superficial aspects of humans, we forget we want our community to be made up of people with good spirits.