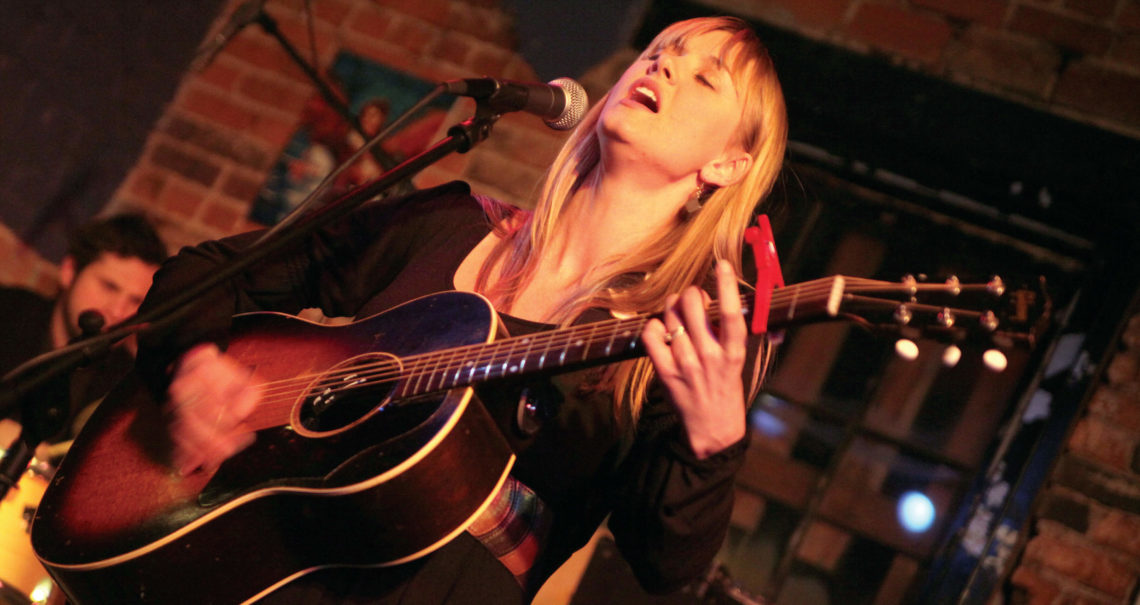 At the corner of North Davidson and 36th streets, in the heart of Charlotte’s NoDa neighborhood, icicle lights hang from the canopy of The Evening Muse — a beacon leading people to the music coming from inside.

Whether a line of people stretches down the street or you can walk right in, the small venue’s coffeehouse vibe is evident from the first steps you take on its concrete floor. A bar on the right side of the space pushes the crowd toward the folding chairs in the middle of the venue, the tables in the back, or the stools lining the bar. Some nights, it’s standing room only.

If the music has started, your eyes focus on the far corner of the room, past the hanging Christmas lights, down the line of local artwork hanging on plaster and brick walls, over the heads of people of all ages, to the small stage from where the talent springs. If it’s early, you’ll usually find an acoustic act, strumming guitars with soft drums leading the groove of the music. Later on, things will likely get a bit heavy — amplified acts that juxtapose the unplugged sounds before them.

As taps are pulled and bottles of beer hoisted from the cooler at the bar, most eyes focus on the musicians — local or national artists who have found a home in a setting that, at capacity, holds a few more than 100 people.

“We wanted to do a listening-room type of venue,” says Lea Kuhlmann, who co-owns the Muse with her husband, Joe. “There are a lot of [music venues] around town, but they are more raucous.”

The Muse has a coziness you don’t often find when searching for live music. Joe and Lea, who are in their mid-30s, opened the venue nine years ago this month to provide a place for acts of all sizes to showcase their talent. “For a long time, we thought about trying to expand,” Joe adds. “Thankfully, we didn’t. I think we would have lost some intimacy and something that’s special about this place.”

When the couple first converted the former coffeehouse into the music club it is today, they didn’t face much competition. Few other places were non-smoking, and most focused on louder styles of music. Here, the music rules.

Acts that have graced the Muse stage include Charlie Louvin, Malcolm Holcombe, Al Perkins, Tift Merritt, and an early gig by country stars Sugarland. Roughly 70 acts will perform at the club each month.

Locals choose the location to hold their CD release parties, touring musicians stop in for a more intimate venue, and people of all ages wind up there during the regular Monday night open mic event, “Find Your Muse.”

“It’s a small place, and there’s no green room,” Lea says. Performers mingle easily with fans. “But the artists come back because they say it’s the best show on the tour. The sound is great, and they love the atmosphere.”

Joe, who also owns a local recording studio, spends many nights working the soundboard from the back corner of the room. Lea, who has performed in a few local bands over the years, takes care of most of the booking for the club. She prefers to book acoustic acts earlier in the evening and leave the rock acts for later. A dual-show approach is one characteristic that sets the Muse apart.

“Right away we started doing the early show and late show concept,” Lea says. “I think that’s been one of the keys to our survival. If we only did one show, we’d have been gone a long time ago.

The whole reason for opening the Muse was never because the Kuhlmanns thought it was a way to make a bunch of money.

“It was one of those things that needed to exist in the town,” Lea says. “What we have here are a lot of performing songwriters who put on a great show that sounds good — and the songs are great.”

For the Kuhlmanns, the Muse has always been about the artists’ interests first — a rare objective in the music business. That’s likely why it’s known by musicians for its good acoustics, audiences who are there to listen, and owners and staff who work hard to bring it all together for each show.

“As a performer, when you get on that stage, it’s as if you step naked in front of a magnifying glass, and the only thing you’ve got to cover up with is your music,” says local musician and “Find Your Muse” founder Eric-Scott Guthrie. “You know people are really listening, you can feel their eyes on you, and I think it’s this intensity that helps bring the best out of acts that play there.”

And with every great show, the word spreads, and the fans fill up the space, and the music plays on.