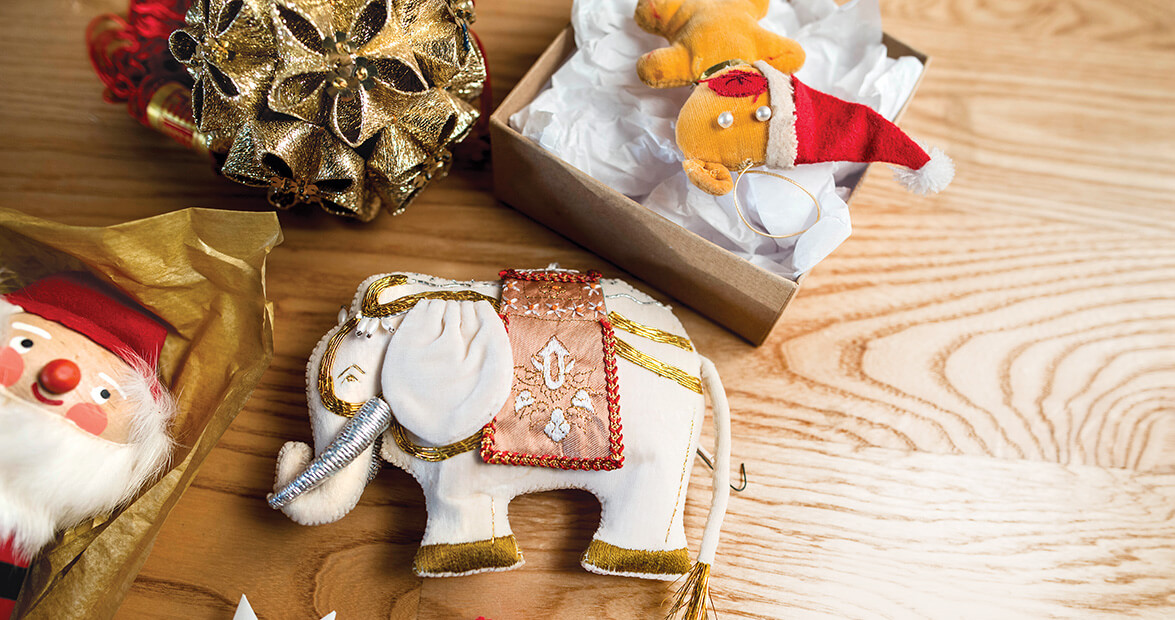 In my house growing up, there was no such thing as just a Christmas tree decoration.

Our tree was usually eight or nine feet tall, quite wide, and by the time I left home at 17, it was entirely covered with the signs of the four lives that had been lived within those four walls. It was so densely decorated that it was hard to see the actual branches of the tree when the small white lights came on.

People came over just to see the tree. My parents had parties, the main point of which was for my mother to show off the tree and, most importantly, talk our guests through it. It was a piney tableau from which my mother could read whole epics. Ornaments were often works of art in ceramic or wood, or whimsical pieces made from folded and cut paper in intricate designs. And nearly every one of them connected to some member of the family in some way.

When my sister joined the pom squad in high school, she got a perfectly painted clothespin with her likeness, in the proper uniform of our school’s pom squad. (I got the trumpeter in the marching band, who does not look like me.) We were active in 4-H as a family, and so the tree had its share of 4-H-themed decorations. I was a runner, so there was a runner on the tree. My mother always gathered a decoration or two from the places where she and my father traveled, and so we had English decorations, Italian decorations, Danish and Swedish decorations.

But there was nothing to unify the elements of the tree, never anything so sterile as a theme. Intentionality seemed artificial, art merely artifice. On our tree, the Murrells lived, and we were inconsistent and flighty, our interests and lives always turning unexpectedly.

My mother found the first ornament in a Taipei market stall less than two months after I was born in the U.S. Naval Hospital where my father worked during the height of the Vietnam War. My father was stationed there with the Navy’s Medical Service Corps. My mother taught at the American school a little, developed some hobbies, wandered Taipei, and gave birth to me. It was her third Christmas away from home. Soon, they would return to the States, but before that, one more Christmas.

The ornament was a small, yellow teddy bear wearing a Santa hat. I remember stitches for eyes, but maybe they were little beads. He was called Teddy Santa. My mother carried that ornament back home to the United States, where it became my job to hang it on the tree when I was old enough to reach. Teddy Santa was not just mine; given his appearance in her life around the time of my birth, he was me, or at least some representation of me that she could wrap in tissue paper each year and carefully put away, a part of me she could keep safe for herself.

Recently, I asked my mother to send Teddy Santa to me, and she said I already had him. Ha! I said. That’s impossible. You would never give that up. I told her there was no way Teddy Santa was anywhere beyond 10 feet of her attic, and we had a little spat over it. A few days later, she called. “I do have Teddy Santa,” she said, her tone daring me to say anything about finding him. She boxed up the ornament and sent it with strict instructions on how to take care of it while it was on loan, and how long before I had to return it to her. (A few weeks.)

If she wanted to give me a decoration, she would offer one of the clothespin ornaments my sister and I made, or one of the decorations we made from plywood and dried beans. Or she’d buy me my own decoration, maybe a tiny mandolin to commemorate my studying the instrument with the great Jerry Stuart of Siler City, or a little cannon on a string to mark my time in the Marine Corps artillery. Maybe a special carved “A” to symbolize my time at Algonquin Books.

Someday, we’ll add Teddy Santa to our family’s collection, and when we do, my life will have changed irrevocably. Time will have gone on, and he will be the evidence in my hand.

For the past 11 years in our old house with the high ceilings in Pittsboro, we’ve put up a large Christmas tree that we buy from a nursery and landscaping company up the road, which they get from a tree farm in the mountains. Our supplier has some huge trees, but mostly he keeps his stock house-size. The man who runs the nursery is easy to spot: He wears roper boots at all times, along with a huge belt buckle, and jeans. He also wears Western hats to the diner down the street from our house. Every Saturday before Christmas our cowboy landscaper invites the town to come over to the nursery for barbecue. The free food is a nice touch.

Our two daughters always want the biggest tree they can get, a tree whose top they can’t quite see. We usually get a smaller tree than what the kids want, and though my wife believes it’s for manageability’s sake, I know it’s because we don’t have enough stories to put up on the tree yet. Not enough has happened to us, our small group of four, and I know that sounds like a strange and unrelated thing to be thinking about when discussing tree decorations. These are my Christmas stories, our Christmas stories, the ones we’re all discovering as a family.

Our little tree in Pittsboro usually has about four feet of headspace, but I hope someday it will brush against the 10-foot ceiling. When we get home, the sisters will argue over whose turn it is to place the star on the top of the tree, then we’ll decorate it with our small collection of ornaments. The tree still seems a bit sparse to me, but it gets less so every year. It’s becoming its own thing, weird and beautiful in its own way, and unlike any other tree. Someday, it will rival my mother’s.

Every once in a while, my mother sends us decorations, and there are a few that our daughters have made. My wife, Sherri, has picked up a few that mark certain moments in our daughters’ lives, which is what my mother used to do. Like my dad, I put an inordinate amount of time into the arrangement of the lights, then watch the children find the hooks and put up the decorations, each in its perfect spot.

But I have never attempted to sing out the song of the decorations while we’re decorating, as my mother did, and this is the part of the ritual I remember most — the thing that transformed decorations into moments, a tree into the history of a family. I don’t tell the stories of the decorations and what they represent because I’m scared I’ll forget something or, worse, remember something bittersweet. I suppose that’s just memory, the bitter and the sweet, twisted together in time.

I’m afraid of time passing. Even though I’m middle-aged and look it, I feel like I’m just starting out. The kids, the tree, even the house — nearly 100 years old, but still new to us after 11 years — are transforming constantly. Time speeds up once you realize its passing.

But my mother was never afraid of time passing, especially because, once a year, she could erect a tree through which time never passed completely. On that tree she captured moments of time, displayed them, and then gently wrapped them in tissue to be unwrapped again in a year, just the same as it was before. There is no imitating that tree. I’m reluctant to even attempt it.

But my wife isn’t afraid. She’s taken up the role of the tree teller, the memory keeper, the trapper of time. When we get out the decorations and pull them from their boxes, one at a time, each child gets a decoration to add. This is the way my sister and I did it long before them, but I keep that to myself. Sherri tells the stories of the decorations, where they came from and why they hang from our tree. She gets sad when she pulls out a decoration she inherited from her mother, who passed away several years ago, but she has the courage to tell its story and go on. Soon we’re laughing at the weird decorations the kids made in preschool.

At night, our tree glows through the windows of our old house. From the street, when I pull up in the car and walk down the front walkway, I see it and wonder what other decorations will make their way onto its limbs someday, and how tall it will someday have to be to contain all four of us and all of our lives. In that moment, the house doesn’t seem so old, and its ceilings don’t seem nearly high enough.