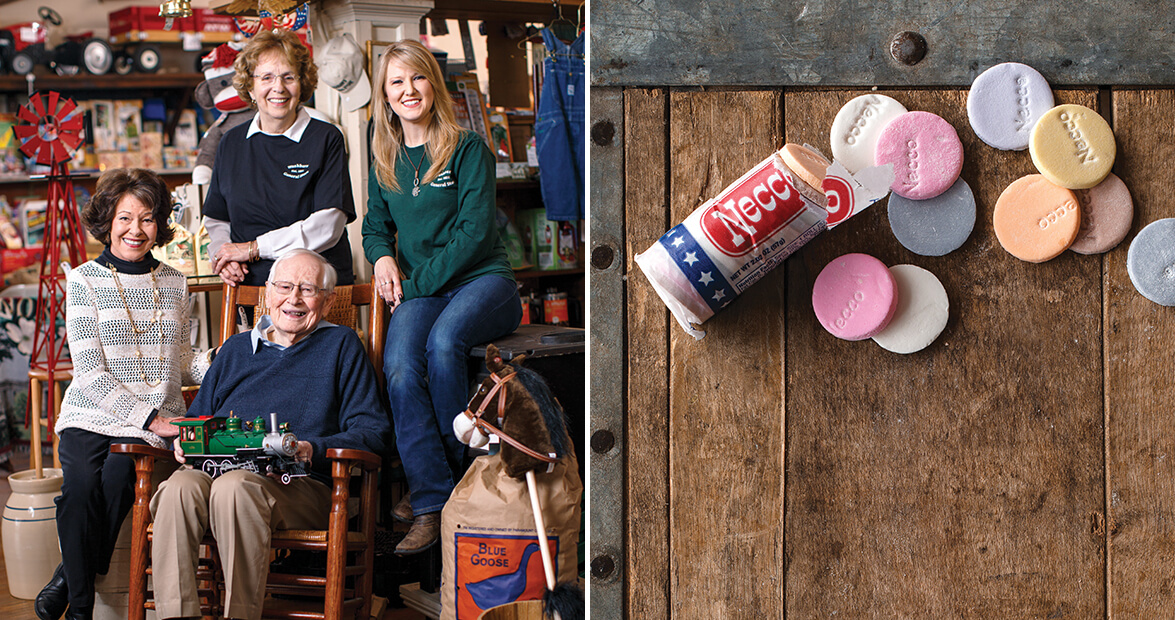 Editor’s note: this story was originally published in 2017.

Out on U.S. Highway 64 heading west from Morganton toward Rutherfordton, you can find a Zumba class, but if you want to see a copper still, you’ll have to take a left and wind through the Pea Ridge community until you get to Washburn’s Crossroads, which itself is only a couple of miles from Bostic, near Sunshine. The still isn’t for sale. Not much on the top shelf that runs the perimeter of Washburn’s General Store is. “The minute we find out they don’t make it anymore, we put it up top,” says Ann Washburn Hutchins, the fifth-generation owner. That includes gas cans from when they were still made of metal, the round head of a gasoline pump from when Washburn’s sold gasoline — rationed, during World War II, as was sugar — and Ann’s great-great-granny’s spinning wheel from 1836. The store predates the spinning wheel by five years. 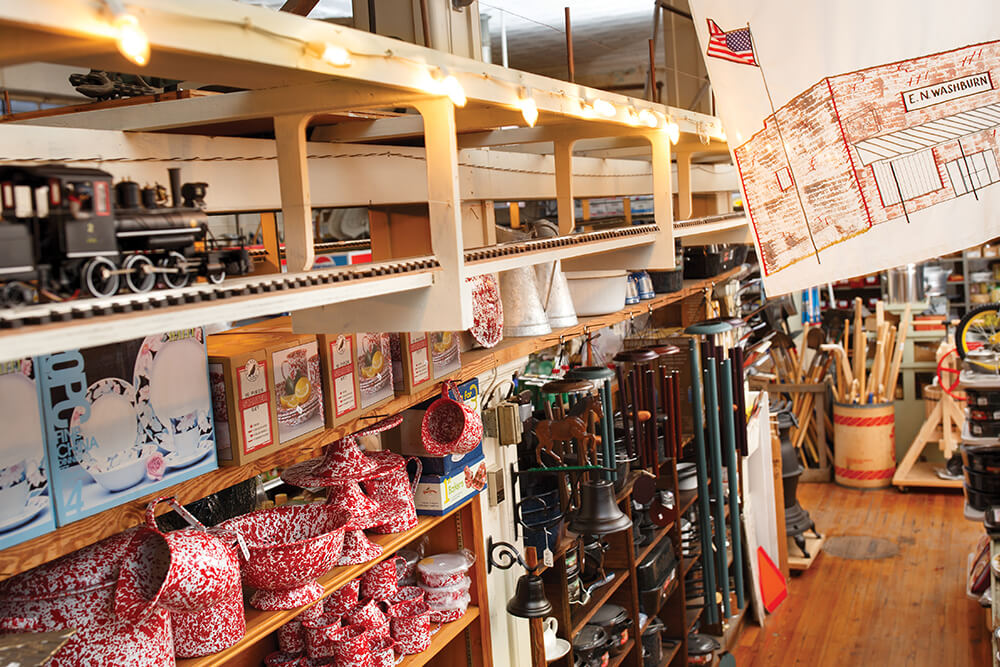 A wide variety of stuff is for sale at Washburn’s, but the top shelf is for looking only. photograph by Jerry Wolford & Scott Muthersbaugh

Wander over the original hardwood floors, beneath the high, pressed-tin ceiling and a model train that chugs along overhead tracks all day, past the shelves of plungers and balsa gliders, oil lamps and wheelbarrows and bandannas and bolts of oil cloth and a cast-iron, potbellied stove, toward the rear. There you’ll find Edward Nollie Washburn III, 87, generation four, at a wooden desk so old that the top drawer has to be open for the bottom ones to unlock, so he can get at a stack of tens to hand to Rebekah Hensley, who runs the cash register. Does he come into work every day? “I come in to hang around,” he says. “Keeps me out of the bed and on my feet.”

According to family history, Washburn’s began in 1831 as a stagecoach stop for gold mined between Rutherford County and Lincoln County. Drivers could water their horses, stock up on supplies, and, in 1836, even buy liquor in small portions. The store passed from brothers Benjamin to Perry to Reuben, then on to the first Edward Nollie Washburn, born in 1874 and called Nollie, then to his son, E.N., and on to Edward III, born in 1930. Does the family ever think about selling it? “I’m thinking about giving it away,” Edward laughs. Then he gets serious. “After my father died, my cousins were asking and asking, ‘What’re you going to do?’ Well, what do you do?” Edward asks. “You open back up and go to work.” 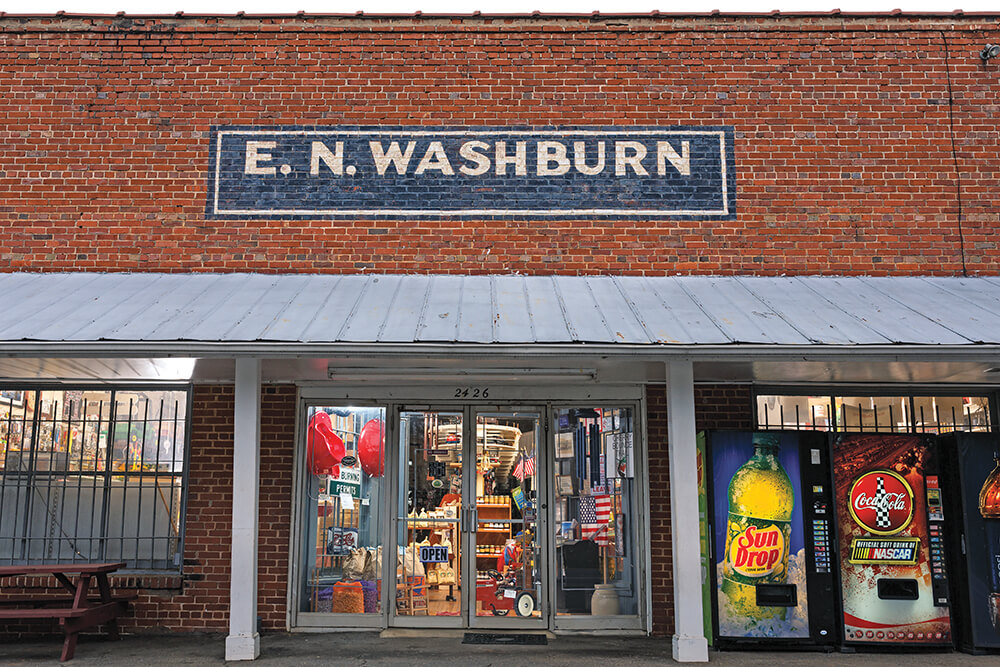 Washburn’s General Store, and 15 other buildings near it, became part of an official historic district in 2002. photograph by Jerry Wolford & Scott Muthersbaugh

Edward and his wife, Catherine, married for 64 years, have three children, nine grandchildren, and eight great-grandchildren. No one is absolutely certain how many iterations of Washburn’s store stood at this crossroads before the current building was erected, apparently in the early 1920s, according to the basement concrete where someone etched the pour date. A newspaper column from 1939 attests to at least six, from the original log building, to a frame building, to a two-story building, and on. “We used to buy chickens; had a chicken house behind the store,” Edward recalls. “And six or seven dairies were all around us, so we sold a lot of barbed wire. And overalls. Then, of course, the eggs, the butter. Loose coffee. Pinto beans that you scooped out of a 50-pound bag. Zenith TVs and Whirlpool appliances.” All under one roof.

“Customers used to be all men,” Catherine says. “Then they became husbands and wives shopping together, and now it’s a lot of women, looking for unusual things.”

“Tourists,” Edward agrees. Tourists who seek out Washburn’s on a day trip from Lake Lure, or know it from watching a re-aired PBS program televised from the store. Sure enough — “’Scuse my rudeness,” someone says, knocking. “I’ve got people who’ve come from New Zealand out here.” Turns out that the fellow has been sending Washburn’s hoop cheese to his Kiwi friends, and they want to see the source. A guest book bears pages of far-flung addresses, some international, plus plenty from nearby Morganton and Bessemer City.

Despite the computers needed for ordering, he still records every check by hand on the vanilla-hued pages.

What do these visitors buy? Hundreds of dollars’ worth of jams and chowchow to ship back home to Florida, for one thing. Candy, for another. Washburn’s sells 50 types of candy, like orange slices, caramels, and horehound. Today, Casee Freshour is worried because the chocolate-covered peanuts haven’t come in. Edward checks the frayed cloth ledger on his desk. Despite the computers needed for ordering, he still records every check by hand on the vanilla-hued pages, and has taught his part-timers to do so, as well.

Tourists are hardly Washburn’s only customers, though. There’s a line for lunch fixin’s — bologna and cheese, which daughter Ann slices while answering someone’s question about the location of drill bits. The customer also buys a bottle of peach Nehi, and a couple of packets of Beechies gum. “We’re providing a convenience,” Ann explains as she cuts up pieces of bologna and cheese to feed to Archie, the 15-year-old dog who munches his lunch beside a farmer at the picnic table just outside the front door.

Edward has drifted to a bench to chew the fat with a new friend visiting from the eastern part of the state. The visitor is out of luck. The sourwood honey with comb has sold out. Still, you never know when you’ll have a need for pulverized limestone, or a porch swing, or a pot holder loom. Washburn’s will have it.